Azur Lane was originally released as a sidescrolling shoot ‘em up on mobile phones back in 2017, in which you used moe anthropomorphic characters based on World War II warships from the different factions in the real war. Given its popularity around the world, Azur Lane ended up getting a 3D remake on PlayStation 4 in 2020 under the name Azur Lane: Crosswave. It’s now 2021, and 3D action shooter/ visual novel RPG Azur Lane: Crosswave has finally made its way to the Nintendo Switch thanks to Idea Factory international! 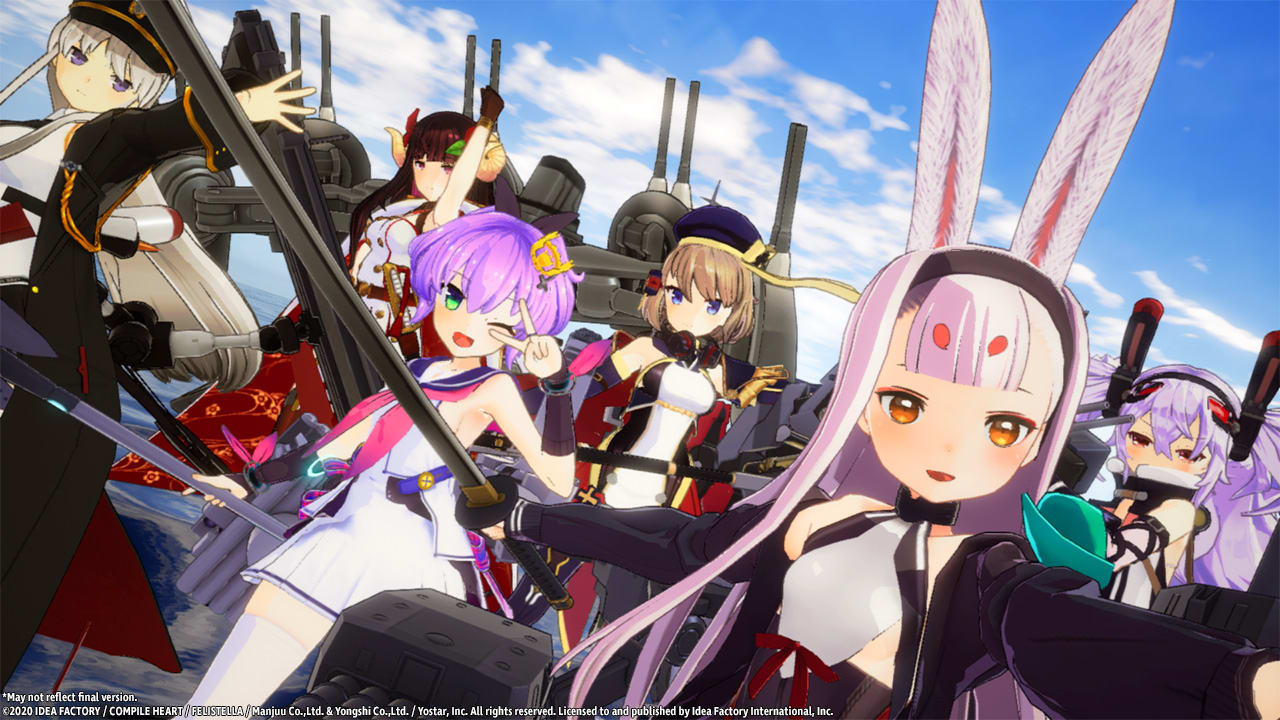 You’ll start your journey alongside Shimakaze, your Secretary Ship who will guide you along the way. You will start with the Story Mode – which is the main attraction of Azur Lane: Crosswave – where you’ll get to meet the members of the different factions. There’s the Eagle Union, the democratic federation that values the principles of freedom and harmony; the Royal Navy, the constitutional monarchy which prides itself in its glorious history of nobility; the Iron Blood, the military empire that strives for great advancements in technology; and the Sakura Empire, an island nation that abides by its culture of honor and tradition. You can probably guess which country each faction is based on.


Because of the work of all four nations, there was a long-lasting peace in the world, all thanks to their defense forces, which include girls with unusual powers, know as Kansen. They represent each of their nation’s expertise and power, and while they do not desire for conflict to exist, they are always ready to step into action if their abilities are needed. Unfortunately, one day a mysterious group known as the Sirens appeared at sea, threatening the world’s wellbeing. What will each of the nations do to maintain the status quo? 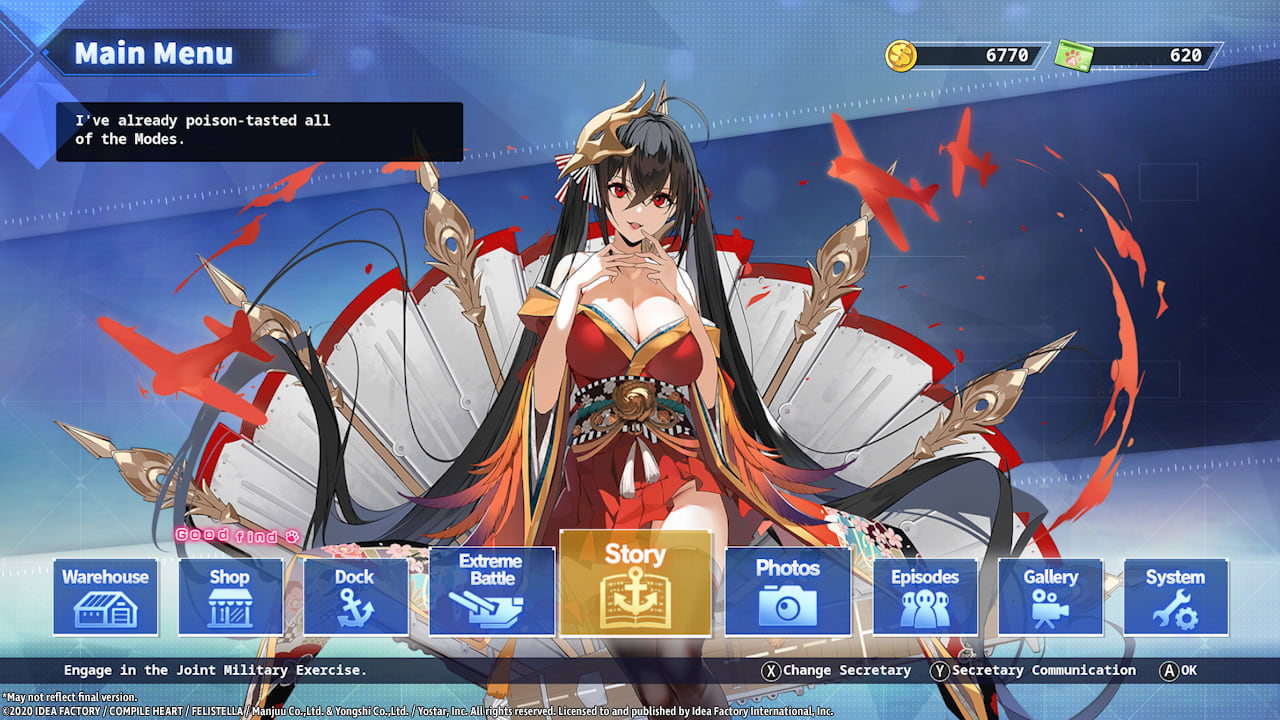 You’ll first get to see things from the perspective of the Sakura Empire. For this section, you will get to learn the basics of the battle gameplay mechanics so that you can get the hang of things. The weather is just great for a bit of practice, so you’ll get started with a capture exercise. You’ll travel through the ocean map, with a compass in the upper left corner of the screen showing you the location of the nearest event you can activate. There can be either green events, which are additional events, or red events, which will be used to move the story forward. If you see a container floating around, be sure to collect it since you can make good use of the equipment they provide!


Once you’re in a fight, you’ll move your character around the battlefield with the left analog stick, adjusting the camera as needed with the right analog stick. You will be able to use a variety of attacks and skills with the A and Y buttons, evading attacks or defending against them by pressing the B button. The skills you can activate will include abilities that boost your attack and speed or that temporarily lower the damage you can receive while also healing some of your wounds once the effect is gone. 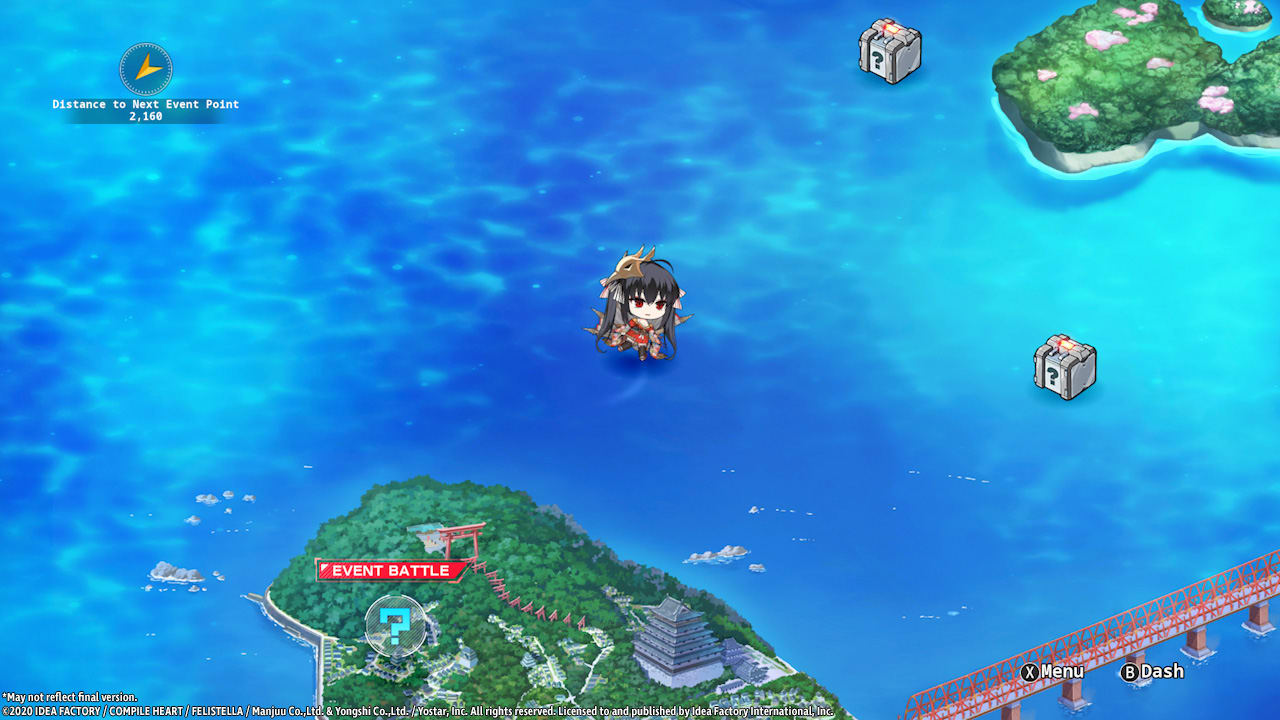 While ducking it out with the many small, medium, and large enemies you will face, you can also use your equipment with the R and ZR buttons, depending on your loadout. Since you’ll be controlling more than one character during a fight, you can switch around between them by pressing left and right on the D-Pad so that you can make the most of what each one has to offer. You will have a main fleet, represented by the three characters on the top row of your party, as well as a support fleet with another three characters. Support characters are unlocked with the A points you earn in battle, so you won’t be able to add them right away. The more powerful a support character, the more A points it will cost to unlock.

You can visit the Dock to check the stats of the characters under your command, to review their level, experience points, hit points, firepower, light armor, reload, torpedo, anti-air, and aviation stats as well as their current equipment and skills. You start with Shimakaze, Suruga, Taihou, and Formidable as your main ships – with the last two formerly being available as DLC for the PS4 version of the game – but will soon gain access to an increasing cast of warships that come to life. Be sure to check in on them every now and then, as well as jump into the Warehouse so that you can review all of the equipment in your possession so that you can see which can best fit your group and which needs to be enhanced to unlock their potential. To enhance a piece of equipment, you’ll need to spend the required funds, as well as own the parts needed for the job. 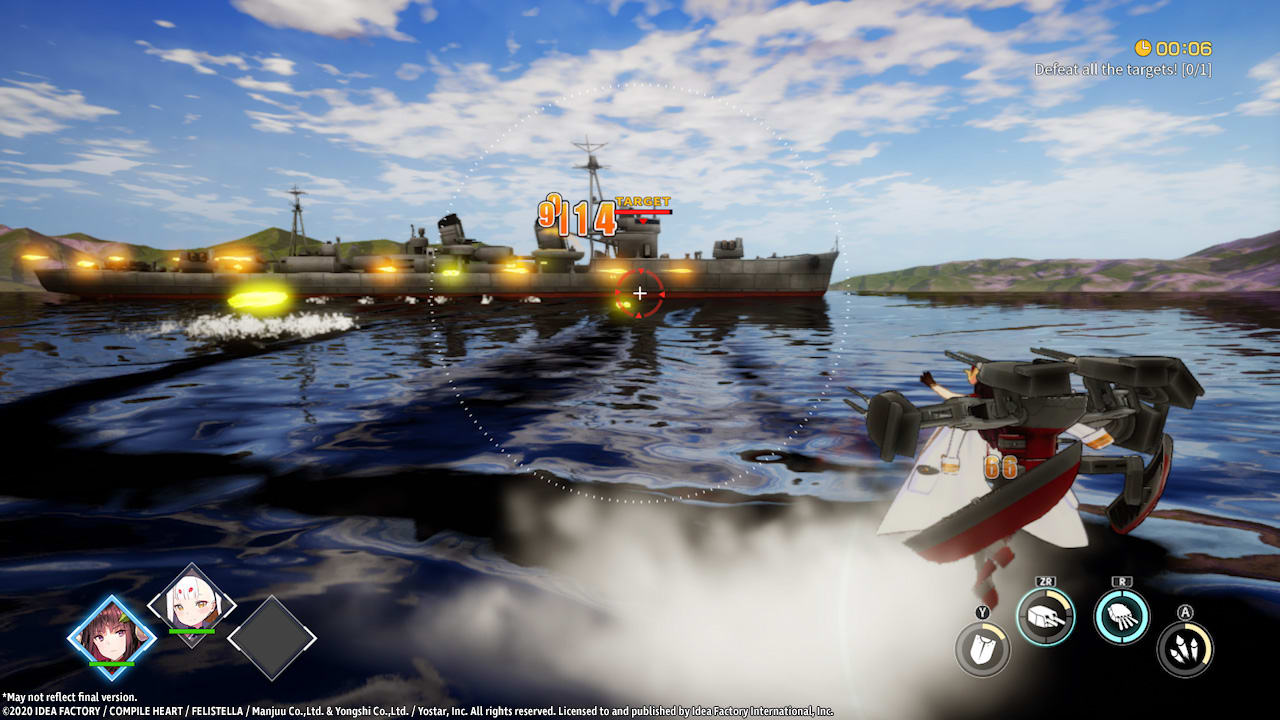 Along with the main Story Mode, there are also three other options for you to experience: Extreme, Photo, and Episode. For Extreme Mode, you’ll be taking on stronger enemy fleets that will only increase in difficulty as you progress down the list. While the challenge is higher, the rewards you can get are also better than what you can find in the main Story Mode. As the name suggests, for Photo Mode, you’ll get to take pictures of up to six characters on the screen as you make them pose on an open stage – an increase over the PS4 version’s limit of three characters. As for Episode Mode, it will contain special events that can be unlocked by completing specific criteria.

As you progress through Azur Lane: Crosswave, you’ll be seeing lots of gorgeous illustrations, experience story events, and listen to a lot of music. If you’d like to revisit all of it, you can do so by entering the Gallery section, where you can check it all out once again. The Gallery is also where you can find all stats related to your experience with Azur Lane: Crosswave, including your total playtime, how many enemies you’ve defeated – split based on their type – the number of equipment found, the number of battles fought in Story Mode, the number of Extreme battles fought, total funds spent at the shop, and how much time you’ve spent with the Photo Mode, to name some examples. 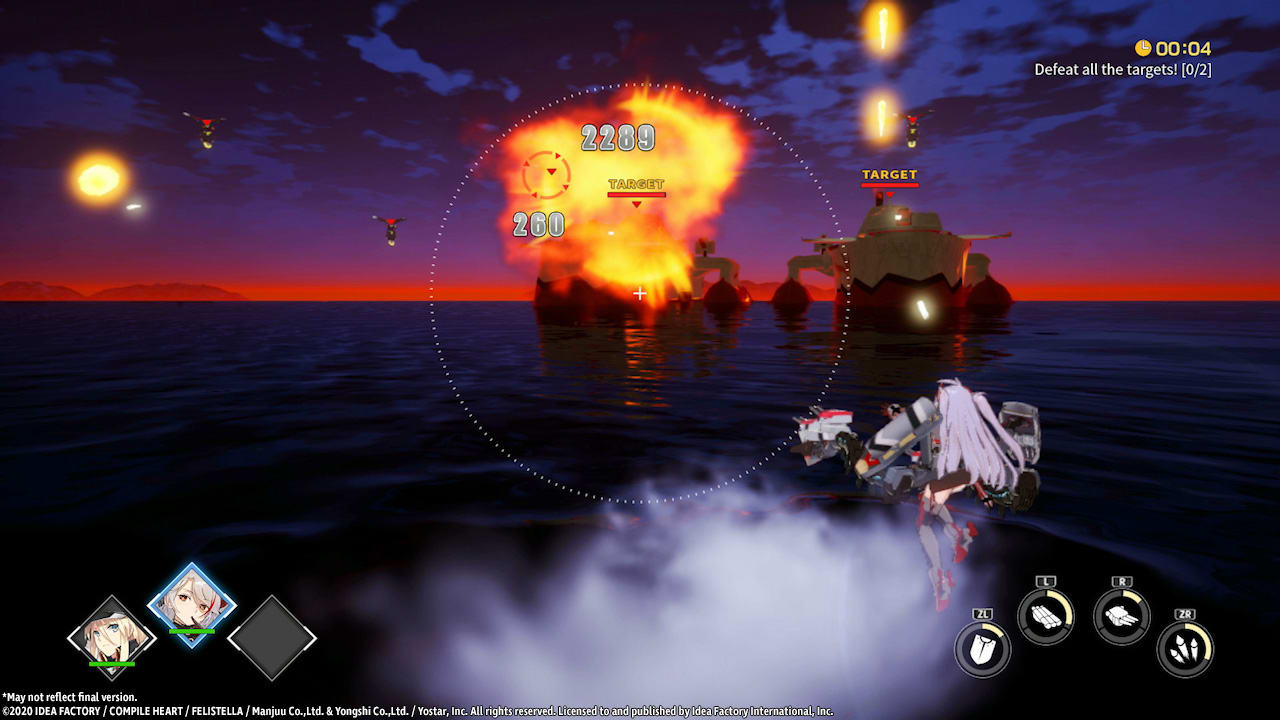 Azur Lane: Crosswave is going to be a love it or hate it type of game since it mixes visual novel elements with 3D arena-style shooter gameplay segments, as you move around a rather flat map for each area, interacting with story events and opening up new 3D missions as you improve your characters and unlock new members for your support fleet. As you can see from the game’s trailer and the screens in this Azur Lane: Crosswave review, the game is a bit heavy on the fanservice, which is not going to be for everyone. Azur Lane: Crosswave is out on Nintendo Switch with a $49.99 asking price, both digitally and at retail. There are three story episodes DLC packs, one resource pack, and an XP boost pack for you to purchase – $7.99 for each story pack, and $1.99 for each of the other two DLC pieces. If you act fast, you can claim a free DLC for Neptune! 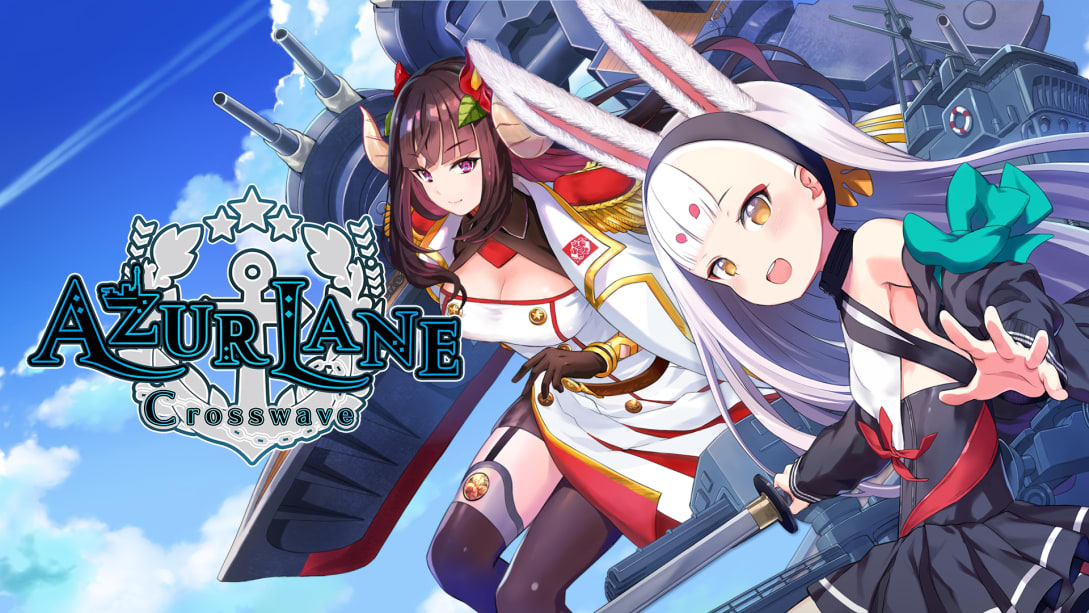 Disclaimer
This Azur Lane: Crosswave review is based on a Nintendo Switch copy provided by Idea Factory International.

Cozy Grove Lands On Nintendo Switch And PlayStation This Year