Summer Catchers from Noodlecake is a 2D arcade-style endless runner with a great art style and fun gameplay mechanics. Learn more in our Summer Catchers review!


In Summer Catchers from Noodlecake, you’ll be taking on a 2D arcade-style endless game with a great art style and fun gameplay mechanics, with an interesting premise. You play as a young girl who one day wakes up and realizes she has never seen the summer. The cold of winter is all she’s experienced, so off she goes on a trip far, far away to the South, where the ocean is, so that she can experience Summer. The wolf from the shop will help her by building a wooden car so that she can start this journey. 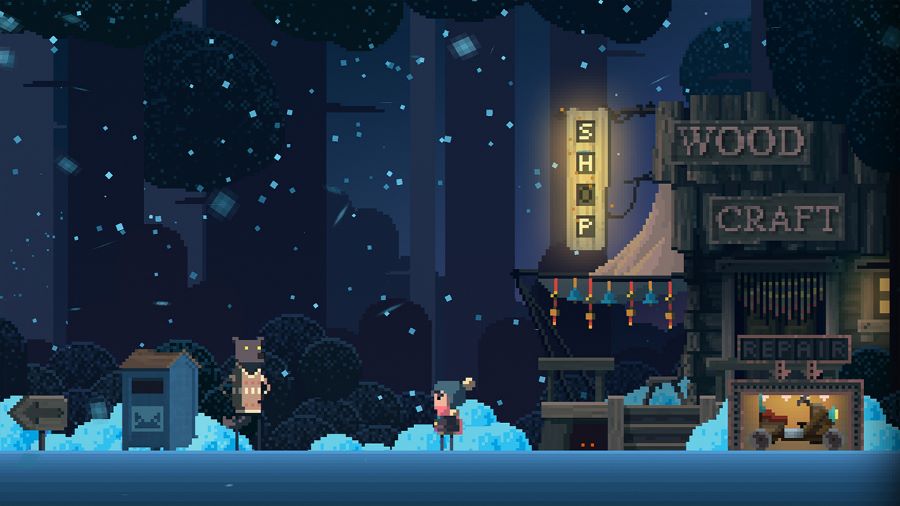 Summer Catchers is a game of the autorunner variety, which means that you’ll constantly be moving forward as you try to do whatever you can to avoid the obstacles on your path. You’ll have a set of tools to use for each stage, which will be shown on the right side of the screen. These include a powerful ram so that you can break through obstacles, a mighty rocket that will allow you to travel at a high speed as you move upwards the many hills you’ll find, or some springy wheels that will allow you to jump over hazards. The game can be played using the Nintendo Joy-Con, or by using the console’s touchscreen when playing in Portable or Tabletop Mode.


Every time you use a tool, another one will take its place, until you run out of them… and that will probably mean it will be the end of your run! But worry not, because you’ll be able to collect mushrooms as you play through Summer Catchers, which you can then use to buy more bumper, jumper, booster, and other tools you’ll unlock as you progress through the game. At the store, you will also be able to purchase new outfits for your character, and new cars that you can put to good use in your adventure to finally experience Summer. There are also postcards for you to purchase, which display the game’s pixeltastic art style. 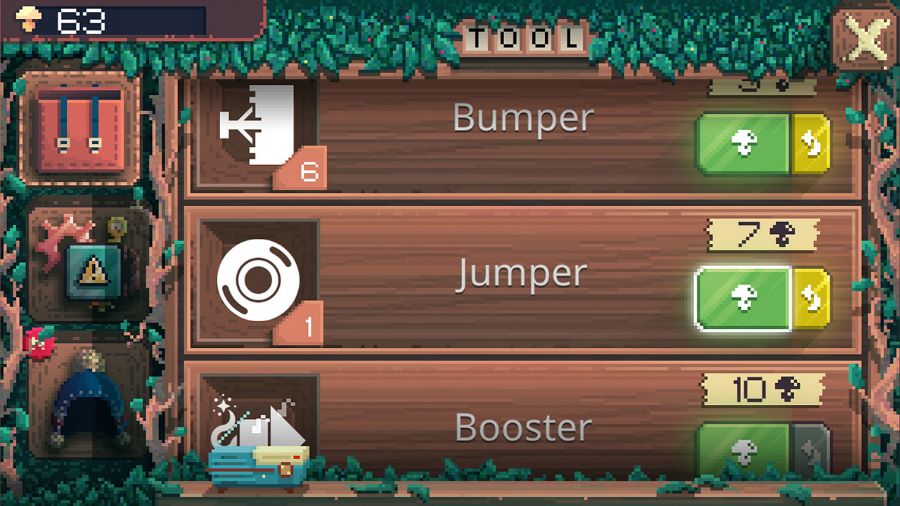 Given its autorunner nature, it’s only natural that you’ll be working on completing a series of objectives for which you’ll slowly but surely be making progress with every run that you take on. These objectives can include things such as collecting mushroom, curing rare trees, cutting down dead trees, or planting some saplings. Each objective will have a numerical target for you to aim for, and once you complete the list, you can progress to the next area. You can select which objective to focus on, which means you won’t have to be juggling all of them at the same time.


To be able to progress to a new area, you will need to take on a boss fight! These will vary for each area. As to not spoil things too much, I’ll talk about the first boss fight. You’ll be going up against a yeti creature who does not like it when anyone tries to exit the forest. On top of dealing with the usual hazards from a normal run, you’ll need to pay attention to when he’s about to rush forward to try and grab you, so that you can use a rocket tool to put some distance between the two of you. 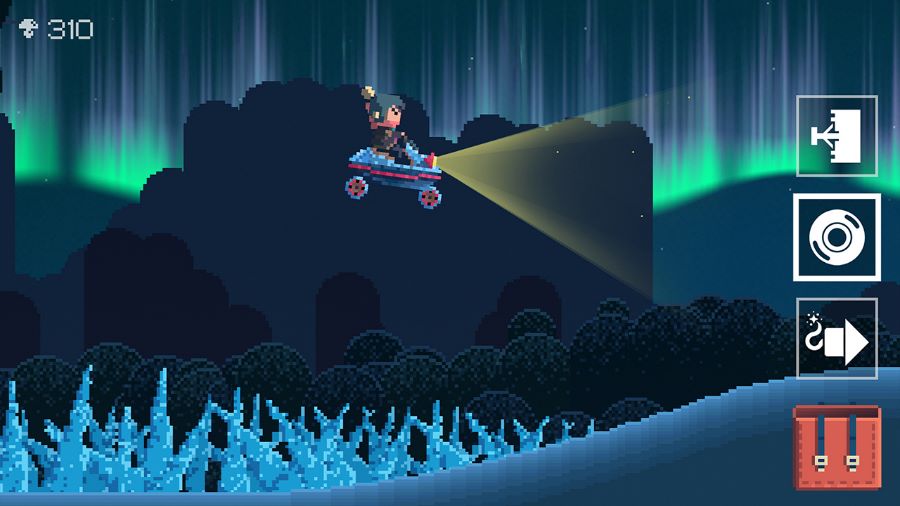 At least once you do get to a new area, you’ll be able to use the mailbox to write to the friends you’ve met along the way. They will write back to you, so be sure to check the mailbox every time one of your runs comes to an end! You’ll need to be patient because the mail takes a while to arrive, but when it does, it’s definitely a pleasant surprise. You can also write back to then and stay in touch once they reply, as long as you have enough mushrooms on you to cover the mailing fee!

You will also gain access to pets, which you can take with you in subsequent runs. The first one will be a baby white owl you save from the oppression of a crow. This white owl will predict the next obstacle, allowing you to better plan your actions in case you need to swap out one tool from the available set. To call your pet, you will need to activate the horn power-up, which will show up every now up in the air, in a similar way to how the bubble or drum power-ups show up. Speaking of power-ups, the bubble power-up is an important one, since it will not only protect you from one hit, it will also allow you to float over water, so that you don’t have to use up one of your tools. The drum power-up will make rain, which will spawn a ton of mushrooms on your path for a short period of time.


Summer Catchers features an in-game Achievements system for you to work on. The objectives to include completing the tutorial, playing in co-op, catching the world map, overcoming a hill or a bridge without using any weapon, finding an old-school cassette player, collecting 1,000 mushrooms from totems, taming a variety of creatures, listening to the inventory song in full, overcoming five obstacles in a row while in a bubble, and buying all outfits, cars, and postcards, to name some examples. 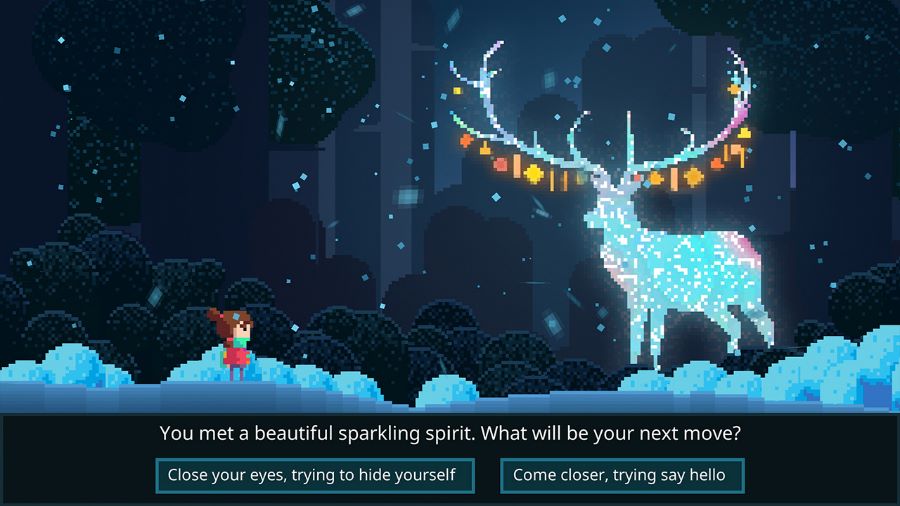 Summer Catchers is a fun autorunner arcade-style release with a gorgeous art style, fun gameplay mechanics, and a good story, which is definitely not something you’d expect to find in a game like this. There’s plenty of content to enjoy as you try to overcome the many obstacles and hazards in each section of the game, as you customize your ride and your character’s look. Summer Catchers is out on Nintendo Switch with an $11.99 asking price.

Disclaimer
This Summer Catchers review is based on a Nintendo Switch copy provided by Noodlecake.