Hero-U: Rogue to Redemption was taken to Kickstarter way back in 2012, with a $400,000 goal. Thanks to the support of over 6,000 backers, the project managed to reach its main goal. The project then had a second Kickstarter campaign during 2015 with a $100,000 goal for the final round of polish needed for the game. This second campaign managed to secure the support of more than 1,800 backers, to bring the game closer to a proper launch date.

Hero-U: Rogue to Redemption was released on Steam back in 2018, and it’s now made the jump to the Nintendo Switch thanks to the work of Transolar Games and Silesia Games. We previously got to enjoy puzzle game Spellkeeper from Silesia Games, so I was definitely up for taking this one for a spin. Among those working on Hero-U: Rogue to Redemption are Lori and Corey Cole, who some of you might remember as the creators of the cheeky and fun Quest for Glory adventure RPG series. 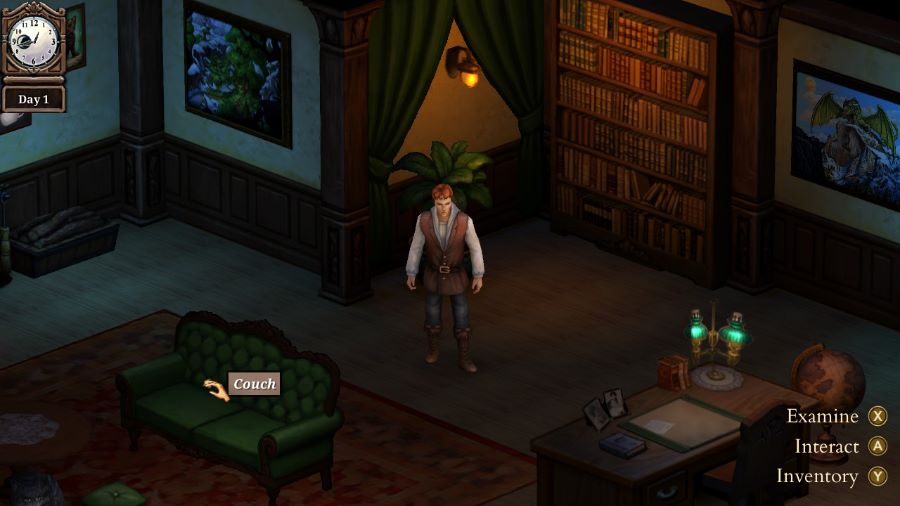 Your journey will begin as you take control of one Shawn O’Conner, a rogue who aims to become a hero unlike no other… after he does some thief work to show you how he’s very much a real thief. To give you an idea of what to expect from Hero-U: Rogue to Redemption – and as to not spoil things -, I’ll talk about the first story sequence in the game. You’ve been asked to find a particular silver coin. After entering the room where the coin is supposed to be located, you will need to find the right tool to open up the locked drawer that protects it… or so you think!

You will move a cursor on the screen to point around the screen so that you can move Shawn, thereby pressing the A button. You can also use the cursor to hover on top of the different points of interest in each area you visit, pressing the A button to get a closer look. Since the room is a bit dark, you first turn on the lamp on the desk so that you can properly investigate what this desk contains. Since not even the silver letter opener you found in one of the desk’s drawers is good enough of a tool to get the job done, off you go to continue searching for the right item.

Speaking of items, the objects you collect will be added to your inventory, which you can check with the Y button. All items will be available under the Inventory tab, but this screen can also give you a good idea of how good your character really is at the different abilities, skills, and resistances that will make him become the hero he wants to be. You’ll have stamina, which acts as your hit points, as well as demerits you can get from your faults. You can also check Shawn’s equipment and change it as needed in order to boost a wide range of parameters. As for Shawn’s abilities, these are split into agility, charm, fitness, luck, moxie, perception, smarts, and magic. Skills will include climbing, combat, defense, throwing, gaming, tool use, and the always important stealth. As for the resistances, they will be for poison, magic, and the undead!


You do need to be careful as you play Hero-U: Rogue to Redemption because your actions will most have consequences! Going back to the first objective you’ll have to complete – which, in case you’ve forgotten already, involves stealing a silver coin -, there are a couple of mistakes you can make that I’d like to briefly discuss. In the room, there’s a piano. After you interact with it, you can take a look at said fine piano, or you can be careless and play the piano. The good news is that this mistake won’t end your run, because the owner thinks that it’s his cat who is trying to play the piano. 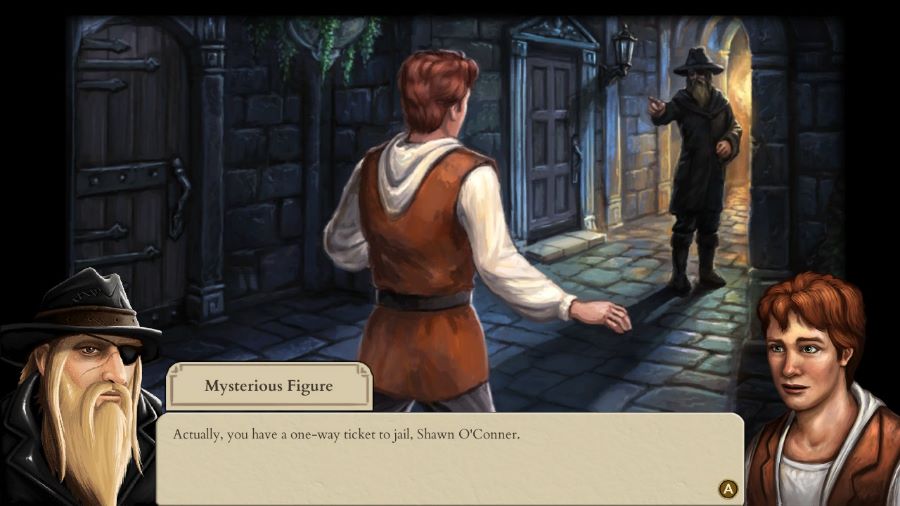 And then, we have the cat. You can interact with this feline and even make some small talk before you decide it would be a good idea to pet this cat, rubbing its belly. What could possibly go wrong? You’re probably wondering the cat is going to make a lot of noise and alert its owner to your presence, but that’s not what you need to worry about. After interacting with it for the first time, you will notice one action in particular that will grab your attention: kicking the cat. He’s an evil act, so a good kick is probably something it deserved. Unfortunately, this tips the owner into knowing something is up, and once he catches you trying to steal from him, he gets the guards to throw you into jail… and then it’s game over! This is why you should always be sure to save your progress so that you’re always ready to reload a previous save to carry on.

While the aforementioned sequence will allow you to learn the basics, things really open up once you are taken to Hero-U by a mysterious man who offers two choices: escape with what you’ve just stolen and be hunted down by the guards, or join the university to have a shot at a new life. After a short set of questions that will help to establish the boost, you’ll get to your starting stats, you’ll be taking on the school life, studying by day, doing what rogues do by night. Technically, he’s in the class of Disbarred Bards since Hero-U, as the name suggests, is a college for heroes.


Because of this, there are some rules you need to remember. One does not talk about Rogue Class since there’s no such thing within the walls of Hero-U. You need to be careful and not let anyone not in your Rogue Class know that there are rogues within Hero-U, and you’ll need to also respect those who are above you and yield some power over your future. You should also never steal someone from the school, or from other classmates, so you’ll have to treat others with respect and cooperation.

To aid you in this new endeavor, you should keep Joel Kyro in mind. He’s an entrepreneur of shorts who is ready to buy and sell trinkets that could prove to be useful for your new adventure at school. Since rogues are frowned upon at a place as prestigious as Hero-U, you’ll need to do whatever it takes to eventually become a hero as you work through the classes for the Disbarred Bards. What can you get from Joel? Well, you could buy things such as a piece of chalk, a fine dagger, a set of lockpicks, or some oil. You will need Lyra to purchase any of these, so be sure to complete additional quests that can help to increase your wealth! 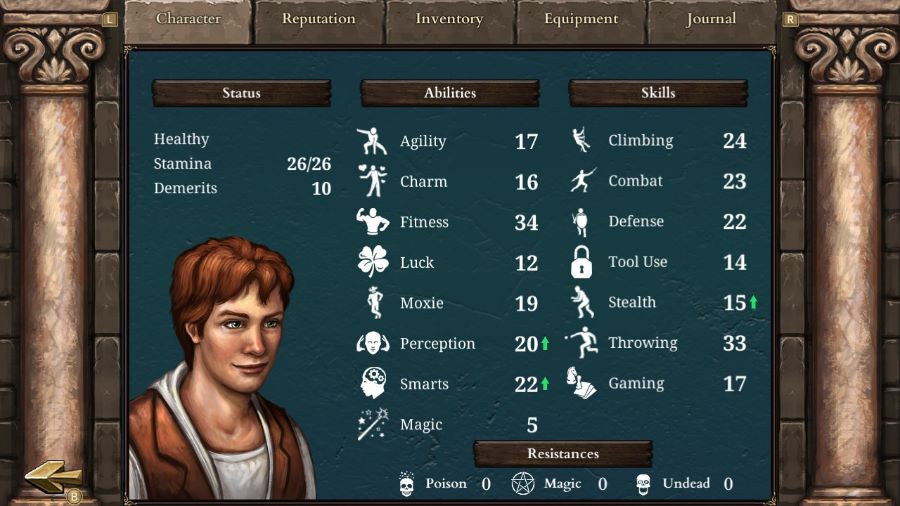 You should also make good use of the journal that Shawn keeps. This journal will detail what events have transpired, what quests are on your to-do list – such as earning some money to purchase equipment and various items to aid you, or finding the dining hall so that you can get a proper meal -, as well as quests that you’ve already completed. As to not spoil things, I’ll refer to the initial quest you took on at the start of the game: finding the lucky coin. This will be marked in the “Done” section of the journal, along with the also very important “Escape from Old House,” since it’s what allowed you to live another day and stay out of prison. You’ll also get to look at the achievements you’ve completed, such as becoming a student at Hero-U.

Time passes with every action that Shawn performs, so be sure to keep an eye on the clock on the upper left corner of the screen so that you can always be ready to, say, go to the dining hall to grab a meal, or meet someone at a specific place at a specific time. Some activities can only be taken care of late at night – such as hunting down some creatures at the wine cellar to earn some extra Lyra.


You need to be careful when entering combat in Hero-U: Rogue to Redemption because if you’re not properly prepared, you’re in for a world of hurt! Battles are turn-based in nature, which means that as long as you pay attention to the enemies, you’re facing and plan your moves accordingly, you have a good shot of surviving the fight. You can select to move Shawn, attack with a melee weapon, use a throwing weapon – if you have one in your inventory – use an item, skip a turn, or try to flee from battle by using the handy chicken icon. Always pay attention to your health bar on the left side of the screen and your enemy’s on the right one so that you can make the right call at the right time. 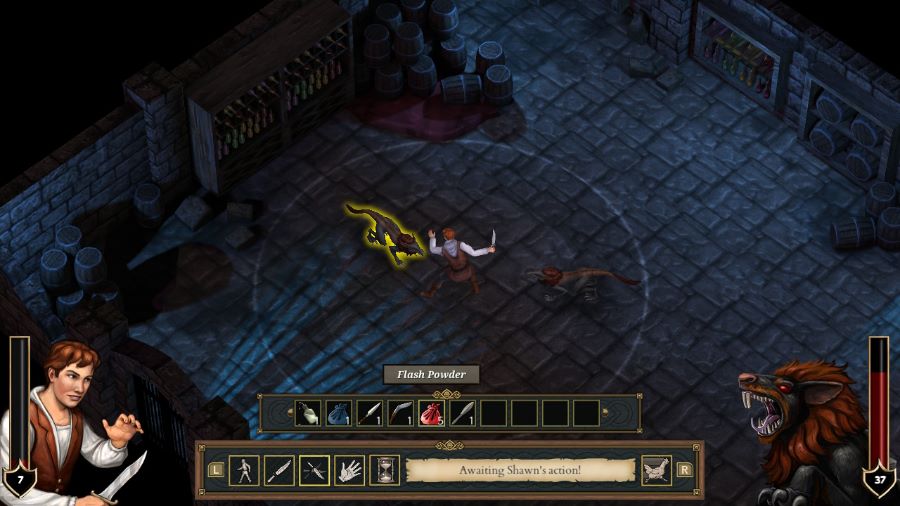 Hero-U: Rogue to Redemption is a very fun action RPG with a ton of stuff to do. It pays homage to the classics in the genre – particularly the Quest for Glory series on which Lori and Corey Cole worked – while adding many of the benefits you’d expect from a game releasing in 2021. You can play this one using the Nintendo Switch Joy-Con or the Nintendo Switch Pro Controller, or use the console’s touchscreen when playing in Portable or Tabletop Mode. There are dozens of hours of content to enjoy in this adventure RPG, with a large list of quests and tasks to complete on your path towards becoming a hero. Hero-U: Rogue to Redemption is out on Nintendo Switch with a $19.99 asking price.

Disclaimer
This Hero-U: Rogue to Redemption review is based on a Nintendo Switch copy provided by Silesia Games.

Thomas Was Alone On Its Way To Nintendo Switch