Gods Will Fall from Deep Silver and Clever Beans is a challenging single-player action game on PS4. Learn more in our Gods Will Fall review!


The gods’ torturous rule over humanity has lasted for millennia. Bent on cruelty and suffering, they demand to be served with blind worship through an oath of fealty pledged from every man, woman and child. To those who don’t submit to the gods’ will; a slow and merciless death awaits.

Experience the brutal trials of a venturous band of warriors in their desperate plight to sever the gods’ callous grip on humanity. Every man and woman who can muster a blade, having suffered the brutality of the gods’ reign for too long, will be called upon to form your clan of 8 Celtic survivors and rise up to take on the legions of horrific beasts and minions that dwell in each of the gods’ hellish realms.

A personal tale emerges with every decision made. Succeed and see legends born. Fail, and watch lives turn to dust.

Gods Will Fall from Deep Silver and Clever Beans is a challenging single-player action game on PlayStation 4. The gods have been torturing humanity for centuries, and it’s time for humans to rise against them. As the humans venture into the forbidden territory, the gods take their revenge and sink all their boats. As Gods Will Fall begins, you’ll see an amazing cutscene depicting the story and set up for this game. A few survivors will awaken, stranded on the island they were looking for, and their quest for revenge begins, with only one goal in mind: kill all of the gods. 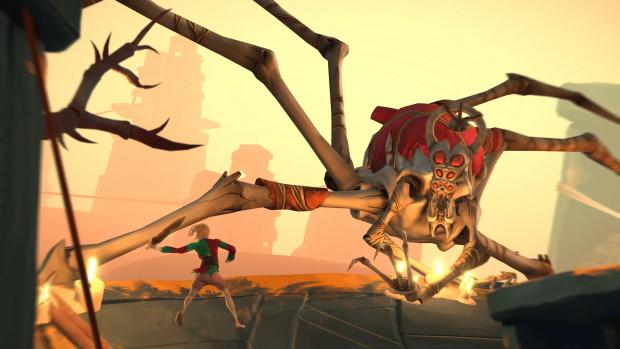 As you begin wandering on the small island, you’ll notice how carefully designed it is. The locations are all displayed on a map, and this adventure is of the non-linear variety, which means you can tackle any of the ten dungeons in whatever order you desire, which was another touch I loved. There are some other points of interest in the map that are non-interactive at first but will unlock later in the game, so be sure to pay attention!

Each of the eight randomly generated characters for your run feels unique, with a lot of detail in each one of them. Some characters have less stamina, so they’ll walk slower both on the map and in the dungeons. Others will have more health and will use their own fighting style and weapons. Some of them will be fired up as they reach a particular dungeon with a specific god to defeat – if they have a personal history with said god, that is. If you lose a character in a dungeon, another member of your group could get a stat boost or drop depending on how close they were. Selecting characters with a stat boost is a good way to help you go through dungeons, especially since you have the option of playing a dungeon with another character to try and save the one that fell in battle. 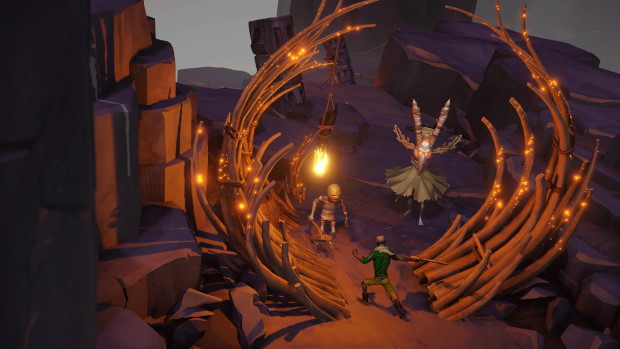 Each character could have a special skill unique to them depending on how lucky you are at the start of a run. All of your party members will be able to unleash a light attack with the Square button or a heavy attack with the Triangle button. Getting attacked reduces your health – as is to be expected – but hitting the enemies fills your health bar back with Bloodlust, which you can use by unleashing a roar with the R2 button to turn any full units of Bloodlust into health points. Parrying enemy attacks is something you are expected to master very early in the game, as this opens enemies for a counterattack. Gods will Fall relies heavily on this mechanic – which has some tight timing – so do master it as quickly as possible so that you can have a shot at staying alive!


Speaking of the dungeons, you’ll have to select a single challenger out of your roster to explore it. Each dungeon’s difficulty is randomized each time you start a new game, so you’ll never know if you are entering an easier or harder one. In dungeons, you’ll notice a pretty big red bar on top of the screen with a god’s name next to it. Defeating enemies in said dungeon weakens its god, so it will have less health once you reach the boss fight. If your character fails in the dungeon, he’ll either be trapped there until another character clears the same dungeon… and entering a dungeon also means that a character can’t get out of it until it is cleared. The level design of the dungeons is solid, although at first, I did think it felt slightly confusing since you don’t know where the destination is, and you don’t have a map of the dungeon. 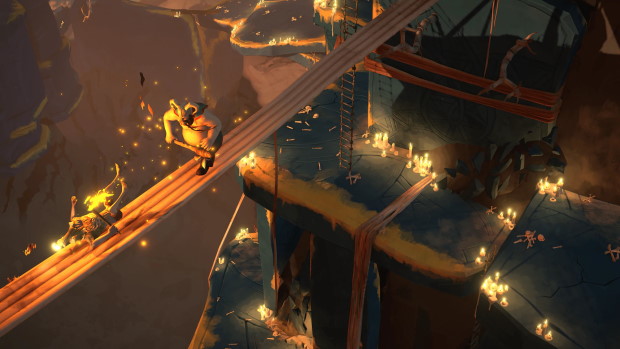 The game is unforgiving. Miss a jump and your character will fall to its death. Miss a parry, and be ready for a world of pain as an enemy unleashes a combo. Miss parrying a stronger enemy attack, and your character will be dead for good. Loose all of the eight characters in your group, and it’s game over! Speaking of which, Gods will Fall automatically saves, so don’t expect to close the game and open it again to recover any missing characters! Something that felt like a nice touch is that when you do get a game over, even if you try to reload a save, your only option will be to manually delete it, confirming how you failed to complete your quest.

Gods Will Fall is a challenging but fun game with an amazing art style. The landscapes are gorgeous and look like as if they were hand-painted, with have a medieval/Celtic look to match the story. I enjoyed walking down the beach with the waves crashing on the sand or taking a look over a cliff to see the deadly spiky mushrooms way at the bottom. The game runs at a steady 60 frames per second, and I’m happy to report this is the first game in a very long time that keeps the fan on my launch PlayStation 4 from going into overdrive. 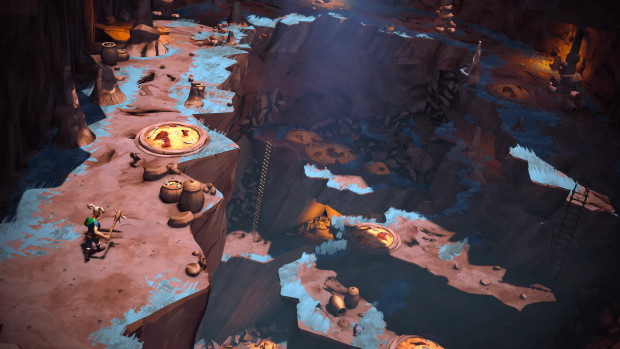 As for the trophies, there is a good mix of getting the upper hand on each god and special feats like finishing a boss fight with a single HP bar left or complete the whole campaign without using an item. Without spoiling the list, I will mention Gods Will Fall features a full list with a Platinum trophy to unlock, with 28 Bronze, 12 Silver, and 2 Gold trophies to obtain. Oh, and you might want to throw an enemy from a ledge so that it falls to its death.


Gods will Fall is a great-looking action game on the PlayStation 4. As you begin with eight characters and progress through the dungeons, you might lose some of them, which will definitively raise your stress level since losing all eight characters means game over! The gameplay is fun and requires mastering some tight timing in order to parry and counterattack as needed. This is a game that is easy to recommend to gamers looking for a challenging adventure, and it’s out today on PlayStation 4 with a $24.99 asking price.

Disclaimer
This Gods Will Fall review is based on a PlayStation 4 code provided by Deep Silver.