Tadpole Treble is ready to shine on Nintendo Switch! Learn why this is a must-play game in our Tadpole Trebel Encore review!


Matthew Taranto, who you probably know from the excellent Brawl in the Family, took Tadpole Treble to Kickstarter way back in 2013, during the video game Golden Era on the crowdfunding platform. Thanks to the support of over 1,000 backers and a lot of hard work, the game was eventually released on the Nintendo Wii U. As someone who loved the game on Nintendo’s last-gen console – and who also backed the Kickstarter campaign – I was definitely up for checking out Tadpole Treble Encore! 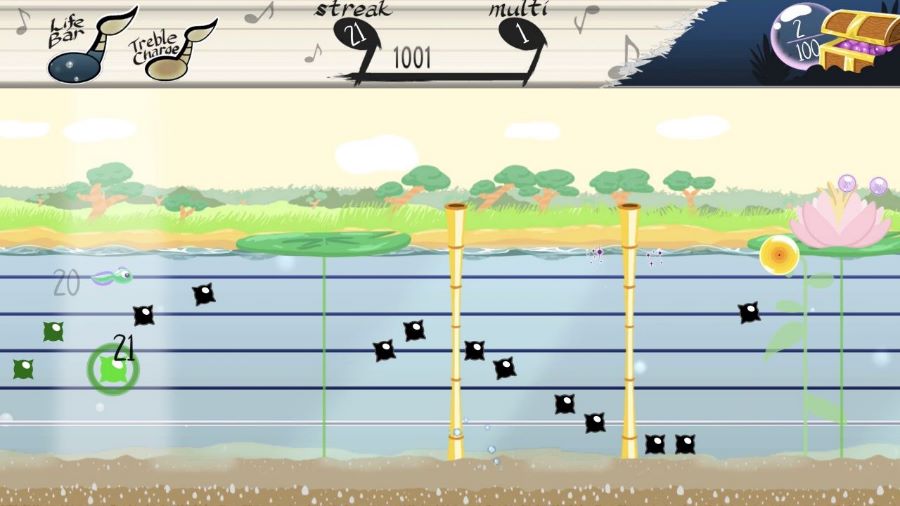 If like me, you’ve already played Tadpole Treble on the Nintendo Wii U, you’re probably wondering if there’s anything new for this Nintendo Switch version… and the answer is yes! This new version features new unlockables, an HD presentation, a new stage to play, as well as the added benefit of being able to play this one at home or on the go in Docked, Portable, or Tabletop Mode. Thanks to this, the Nintendo Switch release is the definite version for the game and a must-play.


If you’re new to Tadpole Treble, in Tadpole Treble Encore, you’ll be taking on a rhythm-based musical adventure starring Baton, a tadpole who ends up on an adventure after being separated from her family after a bird tries to eat her but ends up dropping her far from her home. You’ll traverse through 30 musical compositions – including six with lyrics – as you try to avoid hazards while you collect as many bubbles as possible, keeping your health up as you boost your score to get the best grade possible. 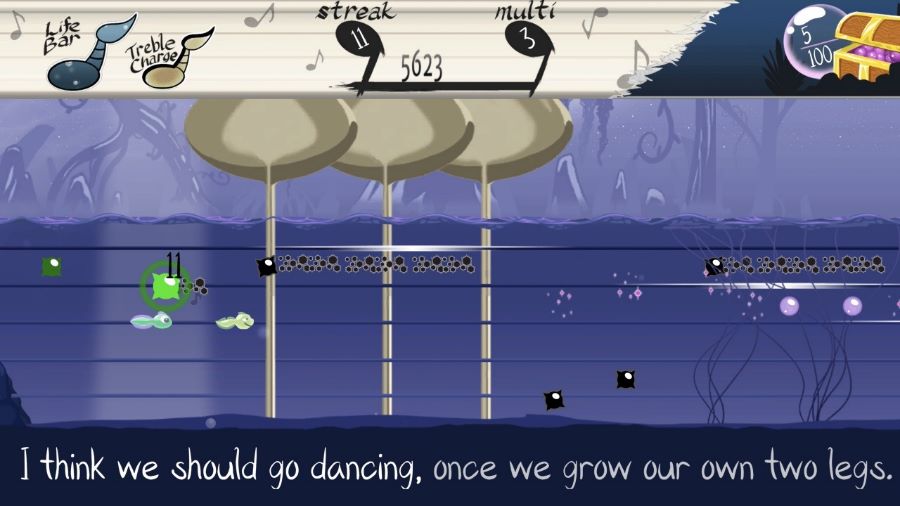 Each stage will have Baton travel through a hand-crafted stage with plenty of little details here and there that will catch your attention. Your mission will be to avoid the notes in each stage, which are represented by black spiky spheres, as you collect bubbles. To do this, you’ll move Baton up and down either with the left analog stick or the D-Pad. You can use the A, B, X, Y, L, R, ZL, or ZR buttons to have Baton strike with her tail, which can be used to accentuate some specific notes or to hit cymbals that will send her through a specific path that will reward you with extra bubbles and more points for your core. You can also play by using the touchscreen on the Nintendo Switch in Portable or Tabletop Mode or when playing on a Nintendo Switch Lite.


As you play and do your thing, collecting bubbles and staying far, far away from the many notes in each level, you will slowly but surely fill up your Treble Charge meter. Once this is full, you can press and hold down the A, B, X, Y, L, R, ZL, or ZR buttons for a special power that will grant invincibility to Baton so that she can’t be harmed for a short period of time, which can be great for collecting some of the trickier bubbles that are located too close to notes or to avoid any other hazards on your path. 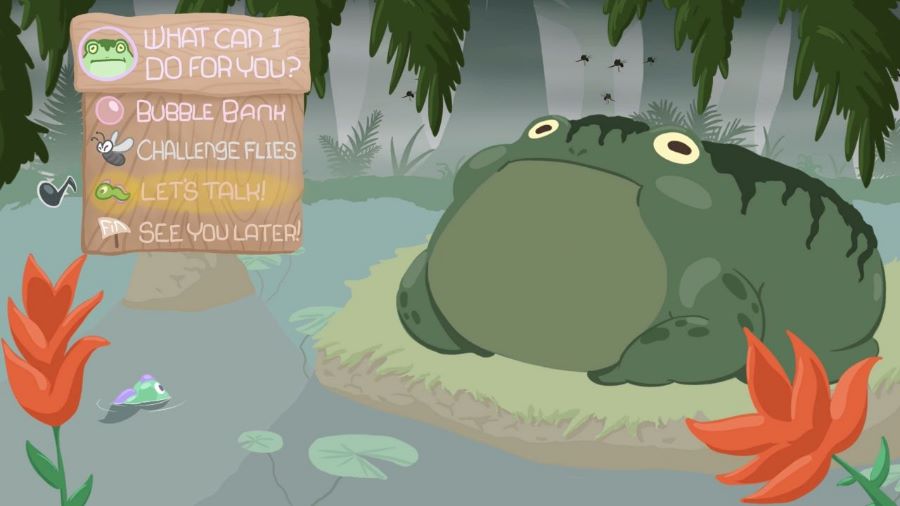 What will you do with all of those bubbles that you collect? On top of boosting your overall score for each stage you play, you’ll eventually be able to use them at currency when you reach Etude’s Grove Pad! You’ll be stopping by to visit Etude, and you’ll get to see how you’re doing by checking out the bubble bank. The more bubbles you collect, the more stuff you’ll unlock! This could be, for example, a music player for you to check out all of the songs you’ve unlocked, or bestiary entries, which till give you more info on Baton, her mother Melody, her father Timbre, Etude, Sonata, bees, butterflies, ducks, and more!


And on top of the main Adventure Mode, there’s also Composition Mode. Composition Mode is a creation tool that will allow you to create your owns stages and music by placing a variety of elements on the screen. You can place notes for different instruments, select from objects such as bubbles, health power-ups, cymbals, and more, as well as set the tempo for the song and select from the different themes you’ve unlocked. Once you’re happy with your creation, you should definitely save it and then give it a try to see how it plays. 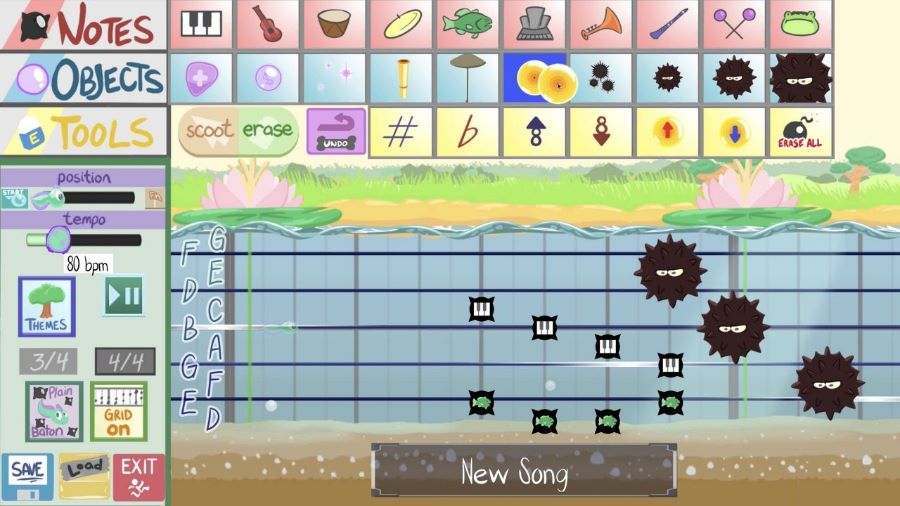 Tadpole Trebel was a lot of fun on the Nintendo Wii U, and it’s definitely a great one to play on Nintendo Switch. The game has a lot of replay value thanks to the five medals you can obtain for each stage for completing different objectives, such as finding a special challenge fly that is hidden in the stage, getting an S grade, getting an F grade, or collecting all of the bubbles in a stage – you do get one medal for completing the level to get you started. Add the Composition Mode where you can build your own songs, and you have a great indie game that shines on Nintendo Switch. Tadpole Treble Encore is out today on Nintendo Switch for only $8.99, and it’s a must-play!

Disclaimer
This Tadpole Treble Encore review is based on a Nintendo Switch copy provided by BitFinity.