What if The Binding of Isaac but grosser and leaning hard on toilet humor? That is the first thing that will come into your head after seeing the screens for Poopdie – Chapter One, an interesting dungeon crawler from indie studio Bulbware and PewDiePie. Yes, that PewDiePie. Bulbware previously gave us the charming Bulb Boy on Nintendo Switch, so I was definitely up for checking out their roguelike dungeon crawler on Nintendo’s console. It turns out this game has a bit more in common with, say, Overlord or Pikmin. 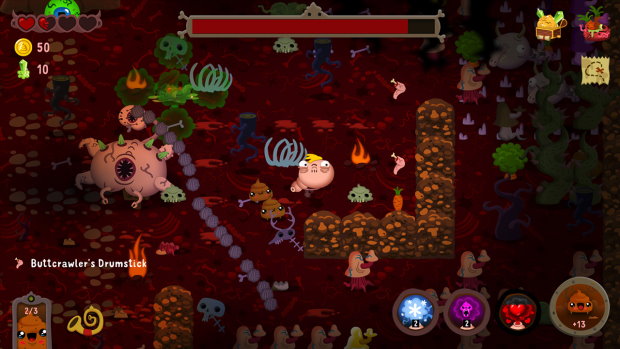 Evil Samron is creating vicious creatures that are now roaming through the land, and it’s your job to defeat them before it’s too late! You learn this from Poopduck, who tells you that what you see as a problem – not being able to stop your constant farting – can actually be put to good use! So, off you go to eat some carrots and read the poop scroll up ahead so that you can learn more about what needs to be done to save everyone.


The game is not an action-packed dungeon crawler per se since you’ll be controlling the titular main character with the left analog stick as you move around each room, pulling out Poop from its butt with the B button so that you can then use the right analog stick to point them in the general direction you’d like them to fly away – or lock onto a particular enemy or obstacle – before unleashing them with the ZR button. If you need to check your objectives, you can do this by pressing down on the D-Pad. The map is set to the Y button so that you know the layout of each area. Your stomach, which holds all of the things you’ve eaten, such as carrots, stinky socks, flowers, or, for example, the drumstick of a buttcrawler enemy, can be checked with the – button. 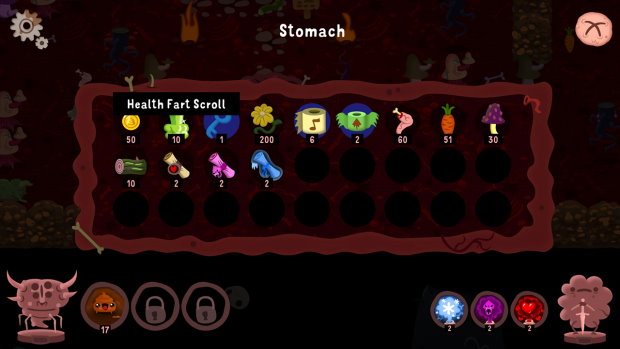 The thing is that you can’t just make poop minions out of thin air. No, you have to eat stuff – food and other ingredients – to be able to poop out minions. Minions come at a cost, and they come in a variety that you unlock as you progress through the game. The regular minions are simply called Poop, and then you have other minions such as Spikey, which is made from three carrots and three pieces of spiky green wood, which is why it can deal more damage thanks to the spikes that come of its poop body.


You will also collect coins which you can obtain from the enemies you defeat – or from some of the stuff you destroy along the way. Coins are not as plentiful as you’d first expect, so you’ll need to make every single one count! These coins can be used to purchase a bunch of the different resources needed to create minions, or you can also use them to purchase scrolls that can recover your lost health, power up your farts, or make your farts freeze enemies. There is also the option of spending coins to upgrade Poopdie and his minions. 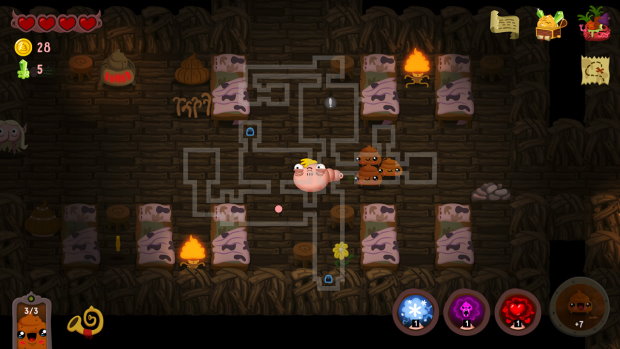 These upgrades will include things such as boosting Poopdie’s health, his movement speed, lowering the time it takes him to Poop, increasing the number of Poops you can have active at any given time, boosting the speed of Poops, making Poops stronger so that they deal more damage, making it possible for dead Poop to drop some crafting ingredients upon said death, having them leave nuggets behind – little minions you can’t directly control, but that can still do some damage or take a hit from enemies -, or unlocking the aforementioned Spikey Poop so that you can have stronger Poop that can have sharp spikes. 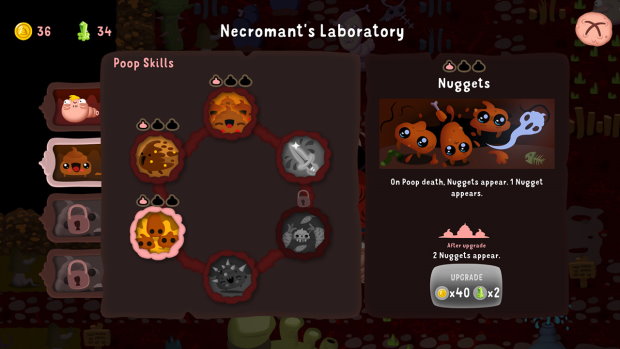 Poopdie – Chapter One is a game that was not what I expected. At first glance, you’d think you’re getting a dungeon crawler that pays homage to releases such as The Binding of Issac, but Poopdie has more in common with the Overlord and Pikmin franchises, which means it’s a bit slow-paced, which might turn some people off. In the end, it’s a fun game to play once you know what you’re getting yourself into, especially given its low $5.00 asking price. The game did crash on me twice, and the first time I ended up losing around 20 minutes of progress due to how the autosave activates only when you complete a major objective or switch between dungeons – at least there’s also the option of manually saving your progress every now and then. Another glitch prevented me from buying anything with my coins until I closed the game and then started it again from the Nintendo Switch’s main menu.

Disclaimer
This Poopdie – Chapter One review is based on a Nintendo Switch copy provided by Bulbware.