Wingspan from Monster Couch is a new board game release brought to Nintendo Switch as a very fun digital adaptation. Learn more in our Wingspan review!


In Wingspan from Monster Couch, you’ll take on a digital adaptation of the very fun board game. Monster Couch previously game us the Viking-themed beat ‘em up Die for Valhalla! on PlayStation 4, in which you control a Valkyrie that jumps from body to body as you try to save the world, as well as the fun puzzle action adventure Steamburg, in which you play as Professor Vincent Cornelius Moore, an inventor who has set out to fight the robots that have invaded the titular city. This time around, we’re getting a very different experience, but that doesn’t mean it’s not a fun one to take for a spin on Nintendo’s console! 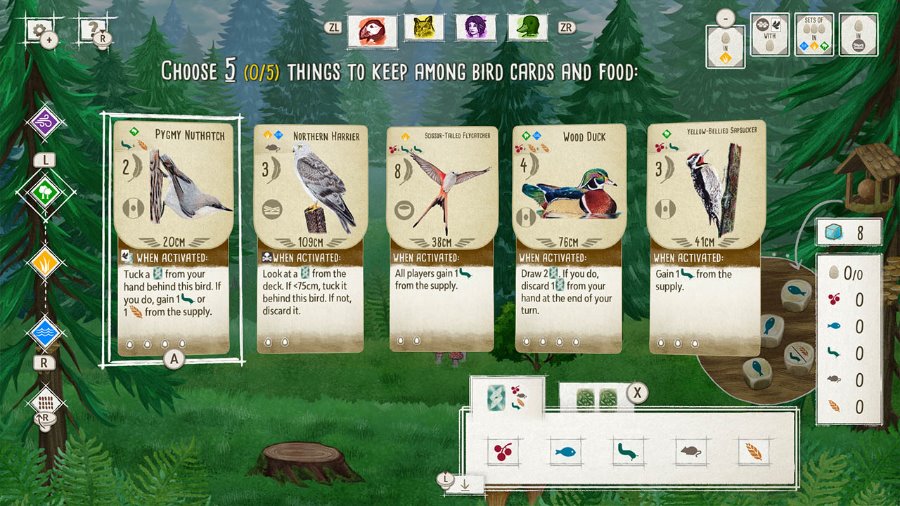 You’ll be controlling your actions with the left analog stick as you navigate through the available interface during each match. You can also show or hide tips and trivia as needed by pressing right on the right analog stick or by pressing in on the stick itself. You can make selections with the A button. To choose the card you want to play, you’ll have to the D-Pad by pressing up. If you’re having second thoughts about your pick, you can cancel it by pressing down on the D-Pad. You can also use the Nintendo Switch’s touchscreen when playing in Portable or Tabletop Mode, or if you’re playing on a Nintendo Switch Lite.

The goal of a Wingspan match is simple: build the best natural reserve possible in the four available rounds, which are split into turns, so that you can add as many beautiful birds as possible to your location, which will, in turn, net you victory points for your efforts. The first round will be composed of eight turns, and every subsequent round will have one less turn to consider, which means you’ll have to plan accordingly so that you can make the most of the seven turns on round two, the six turns on round three, and the five turns on round two.


You’ll be changing between the available habitats with the L and R buttons, which will dictate the actions you can take. In the forest habitat, you’ll be able to collect food for your birds. In the grassland habitat, your birds will be able to lay eggs, which are needed for putting more birds into play. Eggs are also important because any eggs you have left in your preserve at the end of the game will be turned into additional victory points for your total. The wetlands is where you can draw more bird cards. 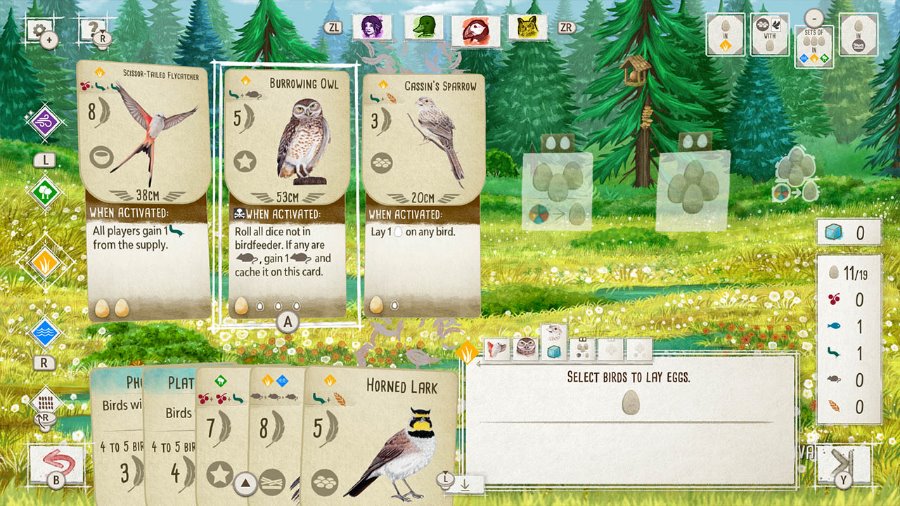 Each of the hundreds of birds you can discover and attract to your location will add a variety of skills, traits, and abilities that will directly affect the habitats and the potential overall growth for the reserve you’re trying to build with your actions. You’ll also need to do some considerable resource management so that there can be enough food for all birds in your reserve. The abilities for each of the birds can come into play either when a bird is activated when the card is played or between turns.

To learn about this, I suggest you first take on the included tutorial so that you know everything that is needed to enjoy Wingspan. For example, some bird cards will have effects such as laying eggs, drawing extra cards so that you can expand your hand and the things you can do in any particular turn, or having all players gain one specific resource type for that turn. You’ll always need to consider the birds that are already in your hand so that you can know what effects they will have when activated and how this can bring you closer to potentially winning the match. Cards will have different symbols that are important for this. The symbol on the upper left corner will establish on which habitat that card can be played. The card will also have the food cost for the bird, as well as the victory points that bird will grant if it’s in your preserve at the end of the game. There will also be the information related to a bird’s wingspan, which is used by some of the birds’ abilities or bonus cards.


On top of all this, you will also need to understand the nest symbol on a bird’s card. There are five types of nests: There are cavity, platform, ground, bowl, and wild nests. Nest are used by some of the birds’ abilities, for bonus cards, as well as for goals that come into play at the end of a round. There are also star nests, which can be matched with any other nest type – think of these as wildcards. 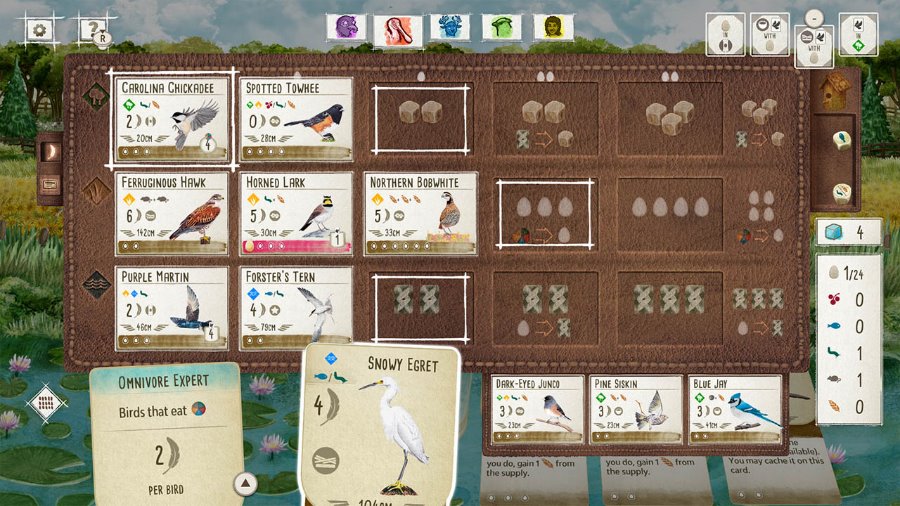 The birdfeeder is shown on the right side of the screen, next to the box that displays all of the different resource types, as well as how many of each of these are available to you. This area also includes information on the number of available eggs. The birdfeeder area will have dice inside of it, which will show which food is currently available. Once you can act, you’ll get a chance to pick the food type that best suits your needs by picking up the corresponding die from what has been rolled.

An advantage of this digital port of the physical board game is that all birds have been animated to give them some extra life while also including recordings of the sounds made by the actual birds in real-life! You’ll also get to learn a lot of trivia as you play – unless you turn this off from the options menu. There’s also the very handy tips feature, which will allow you to see what each area of the screen is for, what the cards in your hand can do, and how to play the game.


While you can play the game on your own against AI opponents, there’s also the option of having up to five players per match. Wingspan has an online component, which means that once you’ve selected your username, picked your avatar and the background for it, you can go into the matchmaking section to play either real-time games or asynchronous matches. Real-time games will be played online with five-minute limits for each turn, while asynchronous matches will allow 24 hours per turn. You can have up to ten active games, so you can jump between them as needed. When you complete a match, you’ll gain one Karma point. If you timeout or forfeit a match, you’ll lose five Karma points as punishment. Karma also determines which players you’re matched up against. 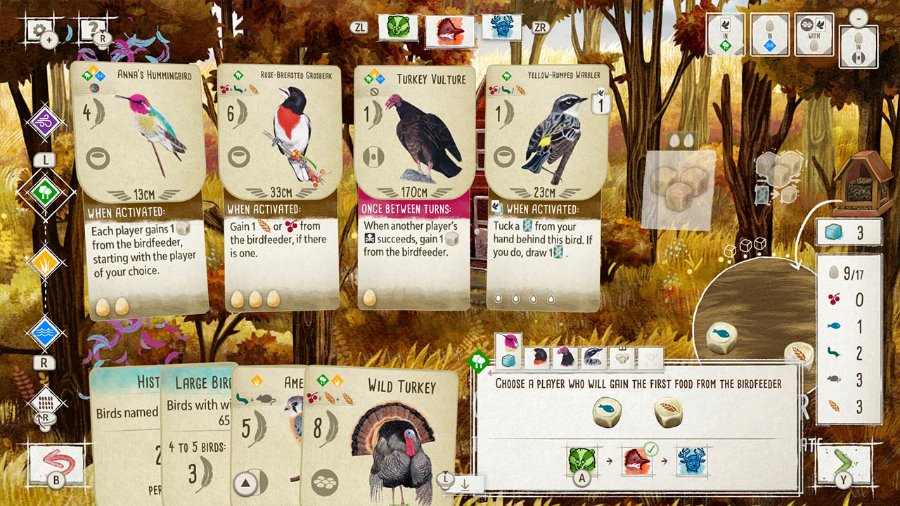 Wingspan is a very fun digital take on a physical board game that has a ton of content to enjoy locally and online. The included tutorial does a great job of showing you all of the basics so that you can jump into proper matches in no time. The animated birds and sounds add a nice touch to the whole experience, and being able to check out some bonus trivia or activate the tips at any time means that players of all skill levels can have a shot at enjoying this one. Wingspan is out now on Nintendo Switch, and it’s available for a $19.99 asking price. 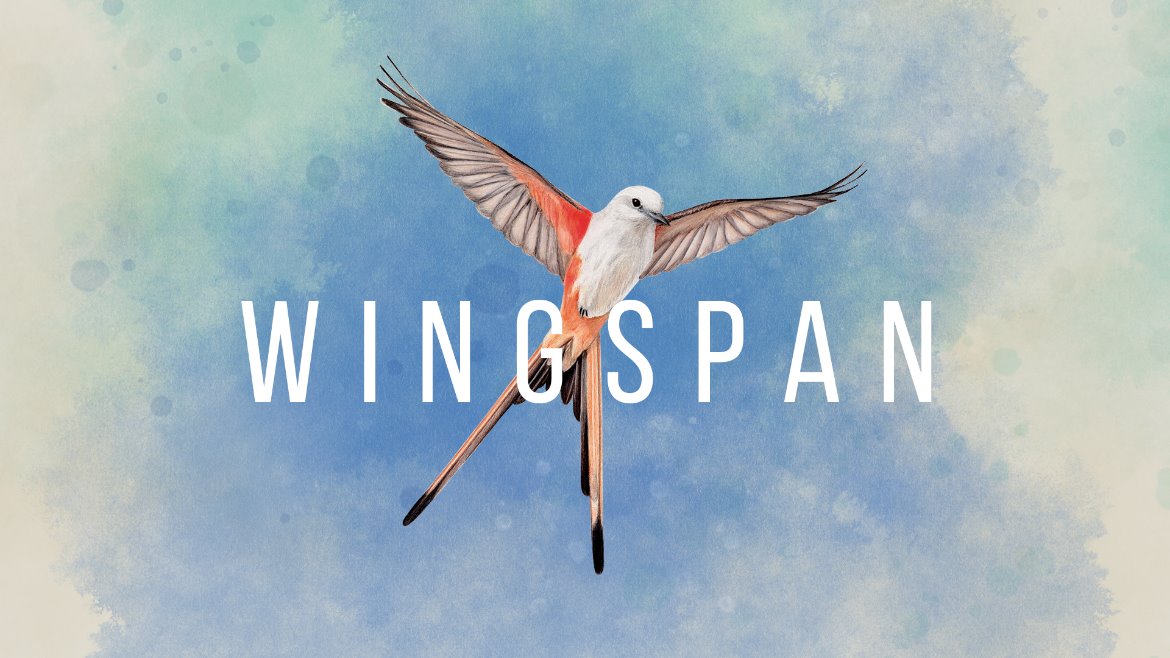 Disclaimer
This Wingspan review is based on a Nintendo Switch copy provided by Monster Couch.