[Beyond PlayStation] Out of Space: Couch Edition Review


Out of Space: Couch Edition from Plug In Digital and Behold Studios is a colorful, hectic, and fun local co-op game about living together in a house in space. They’ve given us Power Rangers’ inspired tactical RPG Chroma Squad, as well as the pair of fantasy RPG titles Knights of Pen and Paper +1 Deluxier Edition and its sequel Knights of Pen & Paper 2 Deluxiest Edition – as well as the sci-fi themed Galaxy of Pen and Paper +1 Edition. This time around, the challenge will be to make each procedurally generated location livable. 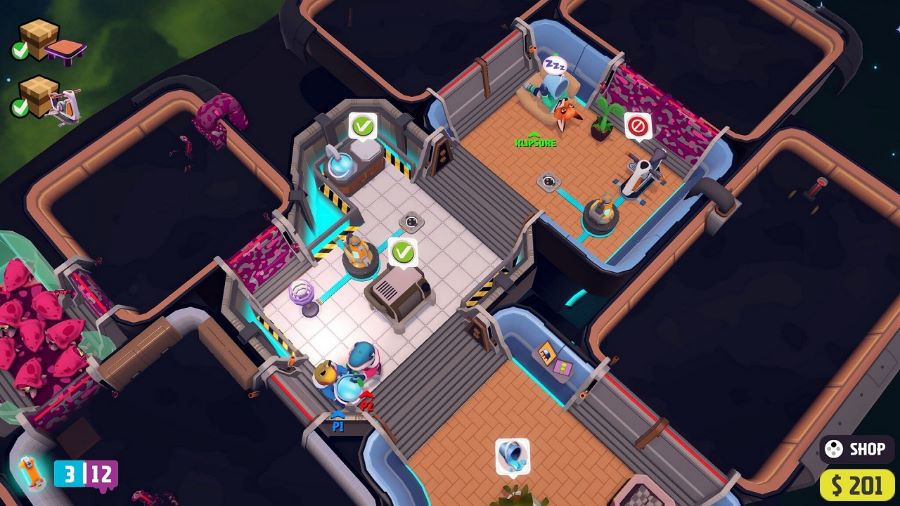 As you take on this one, you will need to rest when you’re tired so that you don’t end up falling asleep, will need to cook and eat food to stay alive, must clean the mess left behind by aliens, trying to stun them so that you can recycle their bodies to earn money, and must make sure to power up every room with a battery so that you can make good use of the tech in each room. Without a battery, you won’t be able to power up the many electrical appliances you can activate during each run.


As soon as you load up Out of Space: Couch Edition, you’ll notice a trio of objectives in the upper right corner of the screen. One will ask that you complete the game’s tutorial, the second one says that you should play three matches, and the last one asks that you win a match in a small ship. Once you take care of completing these objectives, others will pop up so that you’re always busy working on doing this or that while you play – more on these objectives in a bit. 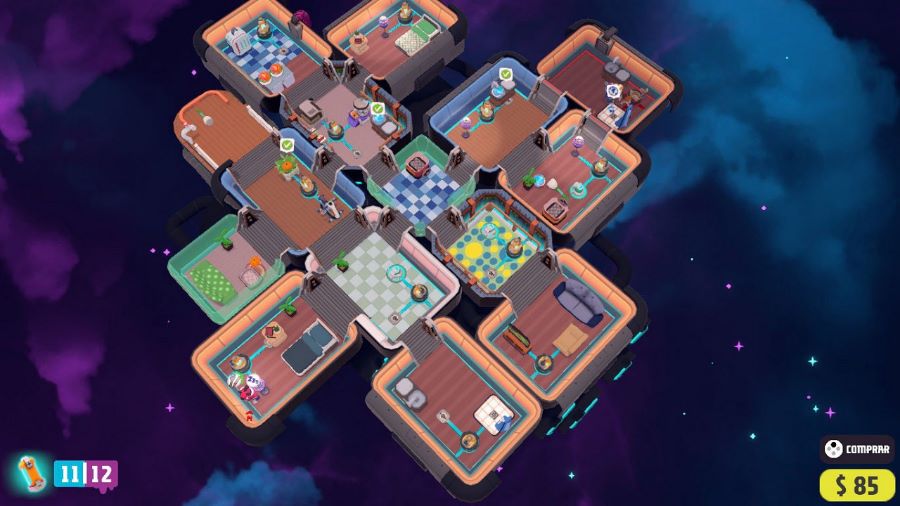 Once you’re ready to go, you’ll be able to move your character with the left analog stick or the D-Pad, looking around with the right one. You’ll interact with things with the A button, dropping stuff with the B button. Based on your performance, you’ll be rewarded with money that you can use at the shop, which you can visit by pressing the Y button. At the shop, you can purchase batteries to power up rooms, thus activating their doors and outlets, a mop to clean up, a shower for cleaning yourself, an armchair for resting, or stuff to decorate, such as a nightstand or a rug, to name some examples.

I definitely suggest you pay attention during the tutorial, since that way you’ll be able to learn about using batteries, cleaning up rooms that are way too dirty, using water to bring plants to life, how you can recycle trash to gain some extra money, and how to act when nasty aliens show up. Oh, and the goo that they leave behind is bad, so you should make sure that you use a bucket of water and a mop to get rid of it before it ends up polluting the whole room. 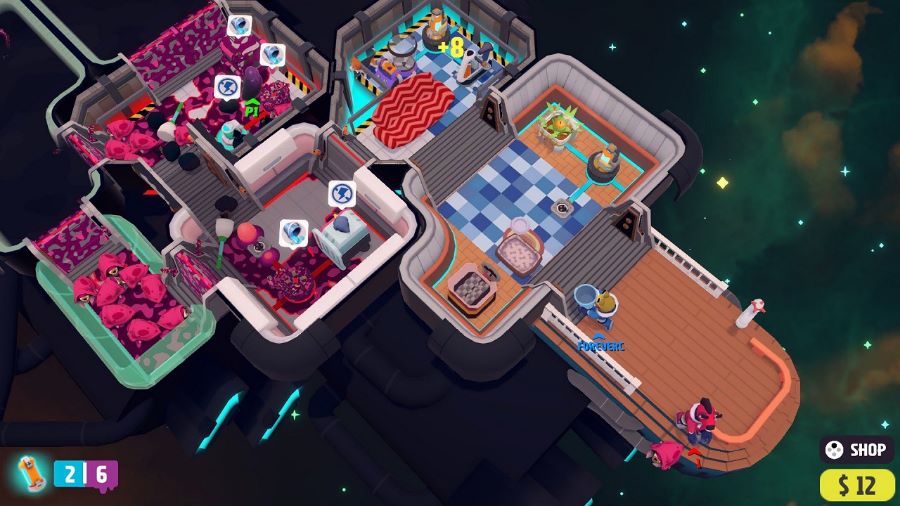 In the settings menu, there’s an option for activating an Accessibility Mode. When Accessibility Mode is activated, the difficulty will be decreased considerably. This is a good option to have since it makes it possible for gamers of all skill levels to take a crack at playing Out of Space: Couch Edition. I do have to mention that activating the Accessibility Mode does mean that some of the in-game achievements can’t be obtained.


On that note, Out of Space: Couch Edition has an in-game achievements system… which is tied to the list of objectives mentioned at the start of this review! Along with the three objectives I’ve already mentioned, you will also need to work on starting a solo match, play with friends, or recycle a ton of items, build dozens of pieces of furniture, activate 100 rooms with batteries, or spend over 4,000 at the shop, to name some examples. 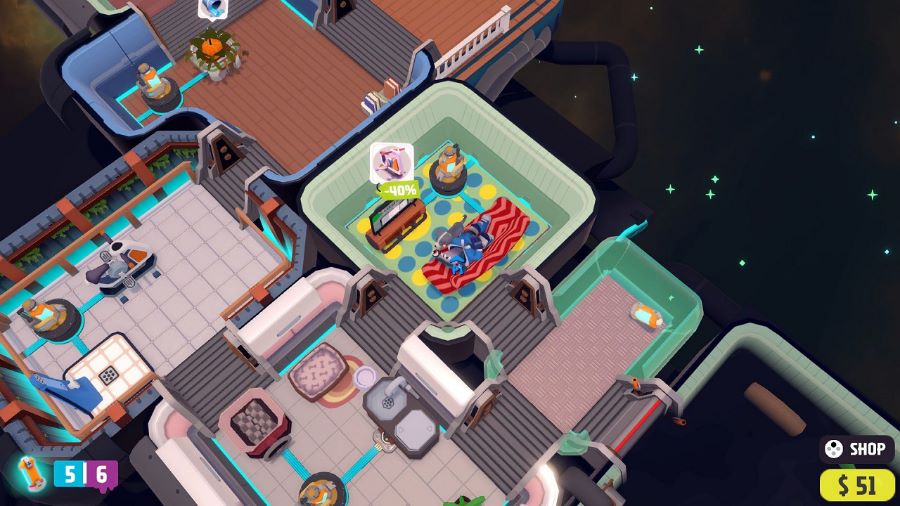 I was pleasantly surprised by what Out of Space: Couch Edition has to offer. It’s a fun single-player and local multiplayer experience with randomly generated locations to explore and cleanup… which does mean that luck does play a role in this one. If you get the right items in the first couple of rooms – such as an exercise bike you can ride to generate additional money so that you can easily buy better items or a couch to rest your weary bones – then that particular run will be a breeze. But if you get some bad luck, you’re going to be juggling many rooms that get dirty all the time because you couldn’t get enough money to buy rugs to cover the floor and keep alien goo from getting everywhere, or a spray to sanitize a room and keep it from developing any new aliens for a bit. Out of Space: Couch Edition is out on Nintendo Switch with a $9.99 asking price, making it an easy one to recommend.

Disclaimer
This Out of Space: Couch Edition review is based on a Nintendo Switch copy provided by Plug In Digital.