Way back in 1997, anti-RPG Moon: Remix RPG Adventure got a release for the original PlayStation console. It was developed by Love-de-Lic and published by ASCII. Love-de-Lic was founded in 1995 by Kenichi Nishi, a company with former members of Square – you know, from before said company’s merger with fellow RPG powerhouse Enix. The game was a Japan-only release until Onion Games got to work on a Nintendo Switch port for the game, translating it to English for a release in Western territories.

Onion Games is the company founded by Yoshiro Kimura, who was the designer and writer for Moon. I previously got a chance to interview Yoshiro Kimura back in 2018 before the release of the very fun shoot ’em up Black Bird on the Nintendo Switch – which I also got to review. Later on, in 2019, I was able to review Dandy Dungeon: Legend of Brave Yamada, a quirky adventure of a game within a game that presents a roguelite RPG-lite experience, which has some a general vibe that is similar to what Moon has to offer on Nintendo Switch. 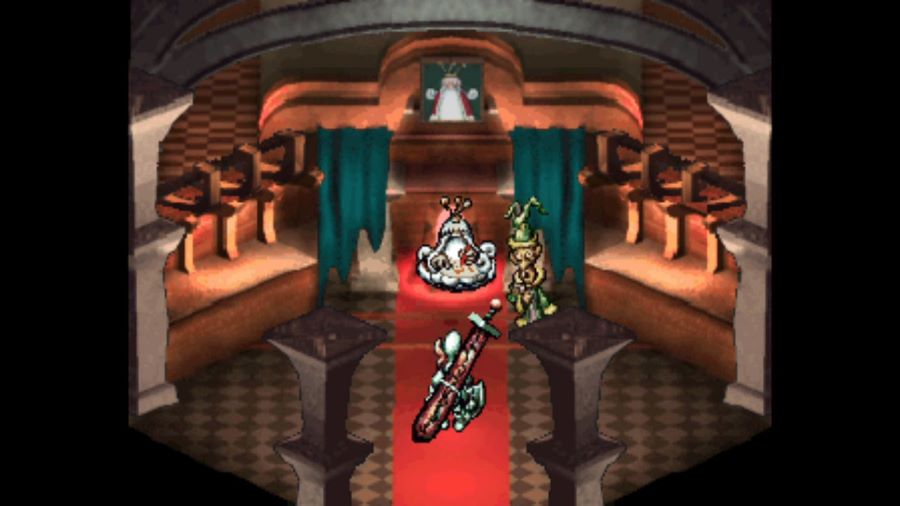 Your time with the game will start just as it did for me when I began to play for this Moon: Remix RPG Adventure review: by taking on a game within a game. You’ll be playing the Moon RPG, which is heavily inspired by the beloved Dragon Quest series – back then known as Dragon Warrior outside of Japan. As you move through different save files, you’ll get to learn more about the Hero who is to defeat the mighty dragon. After this short segment, you are sucked into the game’s kingdom of Love-De-Gard!

It is in there that you realize that the so-called Hero is actually an evil individual who only cares about leveling up as much as possible… and he does this by killing innocent animals! You’ll get to see all of this as you find the dead bodies of all of these animals as you try to clean up after his mess, as you’re enlisted by none other than the Queen of Moon herself! Do you have what it takes to spread as much Love as possible through the kingdom in order to fix things?


To make the most of your time with Moon, you should definitely download the game’s manual. This is important because if you go into Moon: Remix RPG Adventure blindly, odds are you’ll end up feeling considerably confused by the whole experience! The manual is 24 pages long, and its contents are extremely valuable and will give you a better understanding of how the world of Moon works.

On the upper left corner of the screen, there will be a clock. Everything in Moon happens at a steady pace, and characters will be doing things at very specific times, so you’ll need to plan each of your days accordingly, based on what you want to achieve. This is something that certainly reminded me of the excellent The Legend of Zelda: Majora’s Mask and how the 4MB Expansion Pak helped make it possible so that the different NPC in the game would have schedules to follow, sometimes moving between locations! 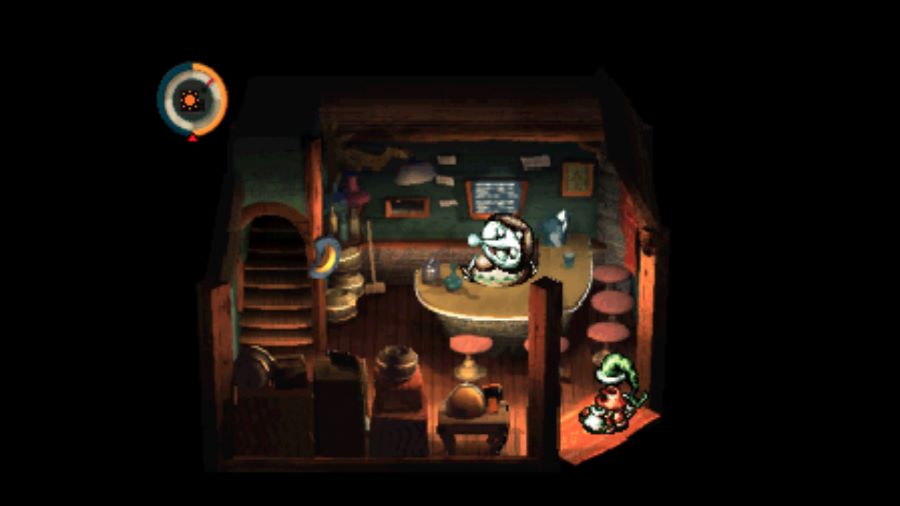 The clock will have a flashing dot that will let you know the game is passing in-game, with the game moving between day and night as time goes on. The lower right part of the clock will let you know how full your Action Limit is, so be sure to pay attention to it, as well as to your character’s walking speed and posture. If your character is slouching and walks very slowly, then that means you’re in danger of losing the last bit of your Action Limit, so be sure to eat something so that you can make it to bed to rest, recover, and save your progress.


As you play through Moon: Remix RPG Adventure, you’ll be able to interact with a colorful cast of characters. As you approach them, you’ll see a speech bubble pop up. This is your cue to press the A button so that you can talk to them. Conversations might have multiple answers, so be sure to pick the best option to move the chat forward. For some characters, you’ll be able to sell items to them or give items to them with the Y button. The A button can also be used to examine some spots, which will be marked with a question mark popping up.

Another important element in the gameplay loop is Soul Catch. As you explore each area, you will end up finding the bodies of slain animals. You will be tasked with bringing them back to life by finding and catching their roaming souls, hence the Soul Catch gameplay mechanic. As you approach an animal’s body, a skull mark will appear. Press the A button, and you’ll open up the Animal File, with information on the deceased animal. Once you’re close to said animal’s soul, you’ll see a catch mark pop-up. Press the A button to try and catch it, and if you succeed, the soul will be returned to the dead animal’s body, bringing it back to life. After this, a UFO – Unidentified Flying Octopus – will show up to take the animal away, leaving behind a bag of Yenow – the in-game currency – as a reward for your efforts.

You need to be careful because there’s a limit to what you can do on Moon. This is known as the Action Limit, and it’s so important that if it ever runs out, it will be game over, and you’ll have to restart from the last save point you made. Eating food will help to restore some of the lost Action Limit, while sleeping will fully recover it. As your character levels up, the maximum Action Limit will increase, thus allowing you to do more things.


To level up, you’ll need to collect as much Love as possible. Love will be obtained as you interact with the different characters you’ll meet or by using the Soul Catch ability. Once you go to bed to get some much-needed rest, all of the Love you’ve collected will be counted by the Queen, and depending on how much you’ve collected, you might be able to level up and boost your character. 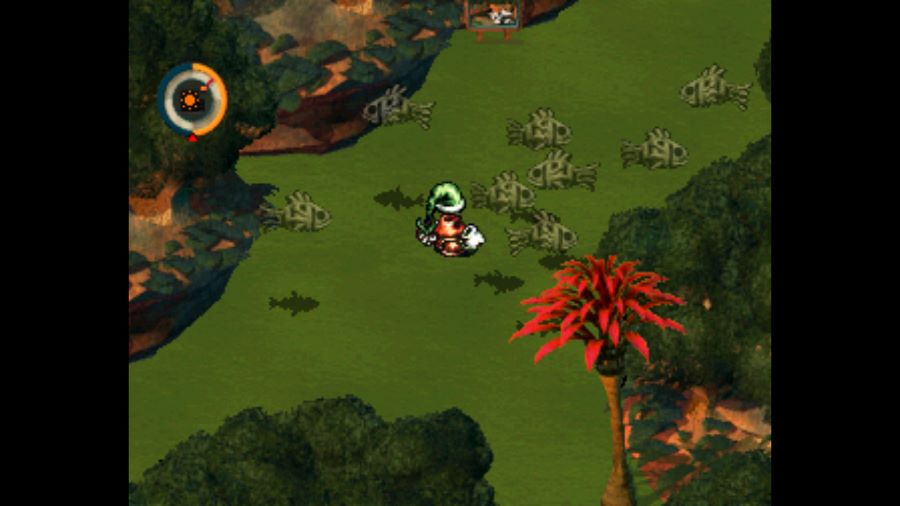 The items you collect can be checked by pressing the Y button, as this will display your item bar. You can select between the different items with the left analog stick. Press the A button, and you’ll be able to select between using an item, eating an item, or stocking an item. This action will send the item to the Stock Screen, which is useful considering that only 29 items can be displayed in the item bar, so if you pick up a lot of stuff, sending some of it to the Stock Screen will free up a bit of space.

The items you can find include the homemade cookies that Gramby will give you at the start of each day after you talk to her, business cards you can use to present them to characters so that they tell you more about the character displayed in each card, an octopus you can eat so that it can instantly transport you to the last save point, a fishing rod, and the required bait so that you can fish, to name some examples.

When you press the X button, you can open up the main menu screen. From there, you can change the game’s sound between mono and stereo, configure the screen, organize items and send them to the Stock Screen, program the Moon Discs (MDs) you’ve obtained, which will serve as the game’s soundtrack, as well as review your status. In the status screen, you can check how much money you have, your love level, the week and day you’re currently playing in, as well as the Action Limit, represented by the full hearts – and empty hearts – on the bottom left part of the status screen. 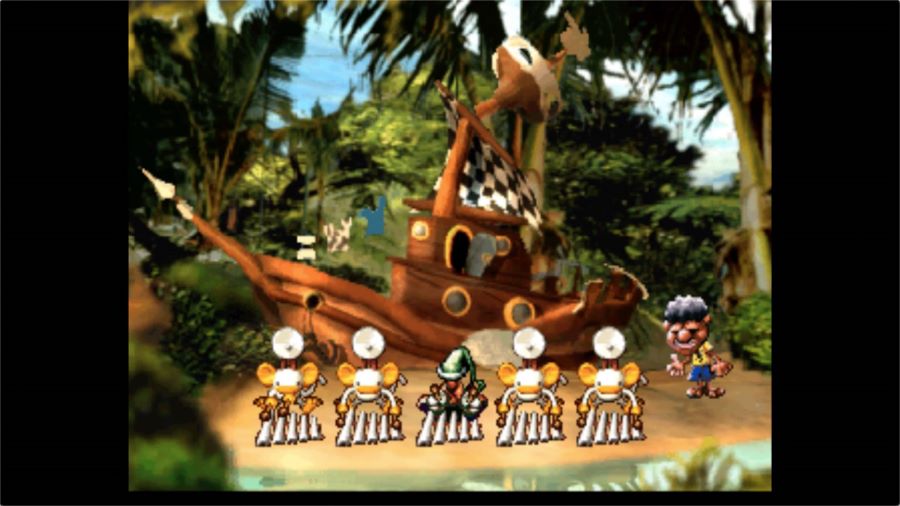 Moon: Remix RPG Adventure is a game that stands out on Nintendo Switch. It’s definitely an old-school adventure, retaining all the quirks of its original PlayStation version, with the added benefits of being able to suspend your game at any time thanks to the Nintendo Switch’s nature. Moon mixes pixel art for most characters with prerendered backgrounds for the locations you visit, as well as Claymation models the animals you’ll help or the Queen of Moon. It’s been a long wait, but it’s definitely been worth it. Moon: Remix RPG Adventure is a unique experience that you have to play, and it’s out on Nintendo Switch with an $18.99 asking price.

Disclaimer
This Moon: Remix RPG Adventure review is based on a Nintendo Switch copy provided by Onion Games.

Cris Tales Out This Year On PS4 And Nintendo Switch

Iris.Fall Out Tomorrow On PS4 And Nintendo Switch