Haven by The Game Bakers on PlayStation 5 is a beautiful love story crafted with a mix of adventure, role-playing, visual novel, and a bit of survival. Find out how this all comes down together in our Haven review!


Play as two lovers who escaped to a lost planet. The only thing that matters is to stay together. A RPG to play solo or with a special someone.

The story for Haven from The Game Bakers starts with Kay and Yu, the game’s protagonists and lovers, making supper. Yu is tired of eating the same thing again, but it’s not like they have a choice with the scarce resources on the planet. Their discussion takes them onto the subject of the Apiary, as Kay wonders how long it will be before they come to get them. The next day, as they explore the lands around the Nest – their spaceship, which they turned into their home – an earthquake makes the Nest fall and crash on the ground, with the earth ripping apart and separating them from it. As they explore the islet to find a way to get back to their ship, they come across a Flow bridge that takes them to another islet. Soon after, they’ll find relics of a colony that indicate the Apiary had been there before, and so they’ll keep on learning about this enigma and the planet as they explore more islets.


When you’re exploring the islets of Source, the game plays from a third-person perspective. You can walk around, although you’ll most likely be using your flow boots to glide by holding the R2 button. While gliding, you can use the L2 button to drift, and pulling the left analog stick down will allow you to make a u-turn. When exploring, you’ll sometimes encounter flow threads that you’ll have to follow until the end to gather flow. Flow is used to provide power for the Nest, but also to enable you to remove patches of rust on the planet. As you progress in the story, you’ll learn more about this rust and what it could be. You’ll also be able to collect food and seeds to eventually grow your garden near the Nest. 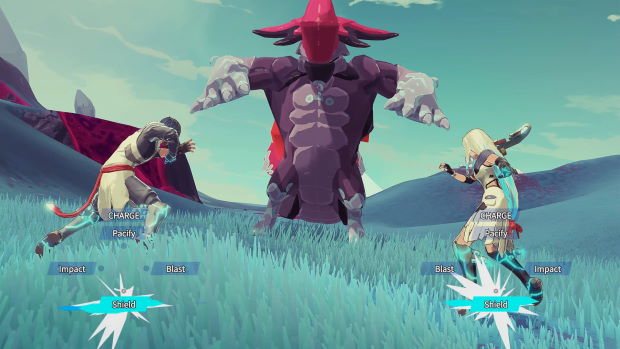 Sometimes you’ll encounter some enemies to fight, and battles will play out in classic role-playing games fashion with an active system in which time doesn’t stop when it’s your turn to select your actions. Both characters have a choice of four actions, which are mapped on the D-Pad for Kay and the face buttons for Yu, so you will control both at the same time1 They can either do an Impact or Blast attack, with each one sometimes being more effective against certain enemy types. Your characters can Shield to protect themselves, or they can Pacify an enemy when their energy is depleted so that they become friendly.

Outside of the exploration and the fights, you also spend some time in the Nest, which is where you’re able to synthesize items, cook meals, upgrade some of your equipment, and also talk, which is an important part of the game. When talking, you’ll sometimes have a choice of answers to give, either for Kay or Yu, allowing you to shape up how their relationship evolves. Some answers will result in their relationship bond leveling up, so be sure to pay attention! 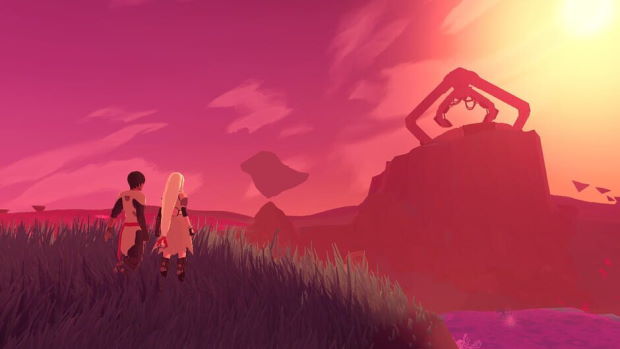 The game’s visuals are beautiful to watch, with some nice sceneries on the different islets and a great art style. The soundtrack is also a strong aspect of the game and adds a lot to the experience. There are also a few subtle things that add to how the game visually allow you to see how Kay’s and Yu’s relationship feels like, such as when they start holding hands while gliding or hugging each other when you stand still for a moment.


Right from the start, the music and general mood of the game were already something I liked. Then I started digging a bit deeper in the story, and I really loved how I got a chance to discover the past that led Kay and Yu on this planet and the future that was unfolding in front of them with the discoveries they made on the planet.

The battles were also fun to play as I developed strategies to successfully beat some of the more imposing foes. The use of double attacks, which requires you to make the same attack at the same time, also added another way of planning things. The fact that these attacks are harder to land when your characters are hungry added into the mix to create a fun experience. It was really interesting to see how all those game genres (survival, action RPG, adventure, and visual novel) were put together in a way that didn’t seem incomplete or badly implemented.

As for the trophies, the list doesn’t look like a challenging one but will likely require some deep exploration of every islet. For example, there’s a trophy for testing every meal you can cook, so you’ll have to make sure you find every kind of food out there to mix all the possibilities together. A bunch of trophies will unlock for progressing through the game, while others will pop as you complete specific actions. 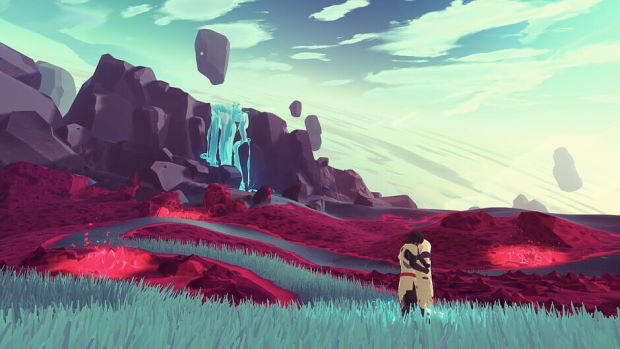 Haven has a lot of great elements that make it an enjoyable game, and it features one of the best takes on relationships in video games I’ve seen in recent years. Add to this that you can play it in co-op with another human being – perhaps with your significant other? – and you’ve got quite an interesting game for your PlayStation 5.

Disclaimer
This Haven review is based on a PlayStation 4 code provided by The Game Bakers.

The Legend of Heroes: Kuro no Kiseki Announced For 2021