Summer in Mara from indie studio Chibig is finally ready to go on PlayStation 4! Learn more about this colorful 3D adventure in our Summer in Mara review!


Indie studio Chibig previously gave us Deiland on PlayStation 4, a fun adventure in which you’re tasked with managing the tiny titular planet. The team took to Kickstarter to secure the final funding needed for the development of Summer in Mara, their new video game project, for a release on PC and consoles. As someone who had a lot of fun with their previous game for our review, so I ended up backing Summer in Mara for the physical art book tier. This whirlwind of a year is almost over, and after getting a release on Nintendo Switch, Summer in Mara is finally out on PlayStation 4! 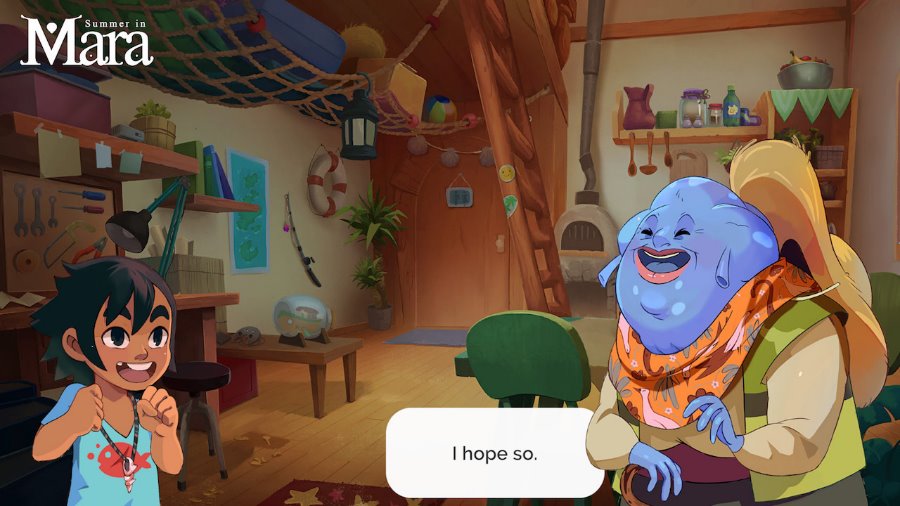 The story begins as we meet Haku. She was fishing one day when she ended up finding a baby who was helplessly crying her lungs out in the middle of the sea! Haku ends up taking her home, thinking that when the time came, she would have to let her go. Time passed on, and Haku ended up raising this little girl as if she was her own blood. Koa calls her Yaya Haku since, to her, she’s always been her grandmother.

Once you jump down from the roof of your house, your first task will be to talk with Yaya Haku, who will ask that you please collect three oranges to make some juice for breakfast. Luckily, there were some orange trees nearby, so all I had to do was press the Square button to kick the trees so that I could collect an orange from each one. After this, returning them to Yaya unlocked a new recipe for orange juice, and I was rewarded with a hoe that I could then use to interact with the nearby soil.


Why? Because I also got a bag of carrot seeds, and it was time for some farming! After preparing the soil with the hoe and planting the carrot seeds, I went to the well to collect some water with a bucket. Pouring the water on top of the seeds was all that was needed for this new harvest to start its journey. Since Yaya is now older and wiser, Koa also needs to help collect some firewood. But for this, an axe is needed, and Yaya has lost hers! Koa jumps into action and asks if she can just help to craft a new one. For this particular recipe, some wood and stone are required! 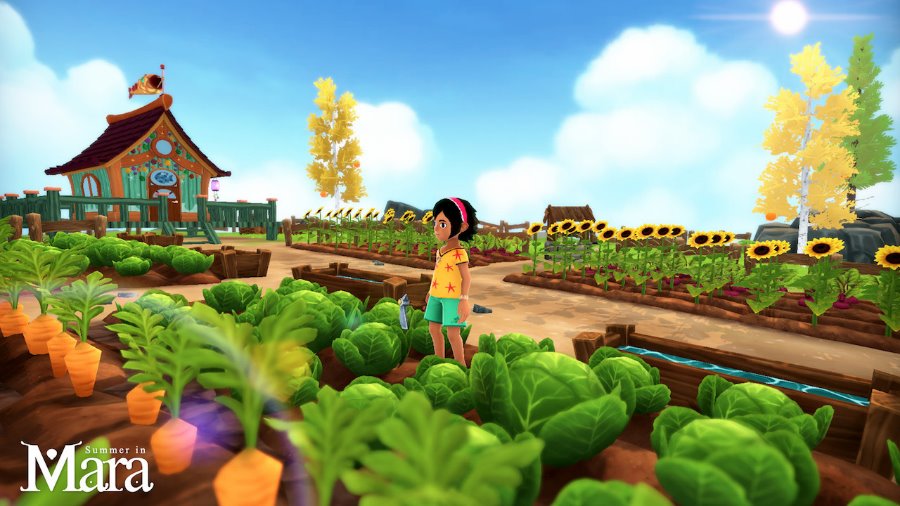 The good news is that since the start of the game functions as the tutorial segment, Yaya will give you the required materials – as well as the recipe for the axe – and ask that you go inside the house and use the workshop to build it! But before making an axe, and since I was already inside of the house, I went into the menu for the kitchen and made an orange juice with the oranges and carrots I had collected. After this, I moved to the tools recipes and crafted an axe with three wood pieces and one stone.


Obtaining the axe led to a new quest: cutting down a tree with it. But since we need to be thankful that the tree will serve as firewood, Yaya gave me a pine nut seed so that I could prepare the ground with the hoe and plant the seed for a new tree to grow. This led to a series of other tasks I had to complete before helping Yaya get on the boat for a short trip she had to take. Meanwhile, I crafted a fishing rod and went to the nearby pond to fish catch some redtail catfish with my new tool!

The fishing mini-game asks that you first press a button as a circle closes in on the indicator in the center of the screen so that you can cast the fishing rod into the pond. I messed up the timing the first time around and ended up with a bag of trash. For the second try, I nailed it and was then taken to the next section of the mini-game. For this, I had to use the left analog stick to move a cursor left and right to keep up with the 2D fish as it swam left and right so that I could lower its stamina. After repeating this three times, I was ready for the next step in my journey: cooking dinner! 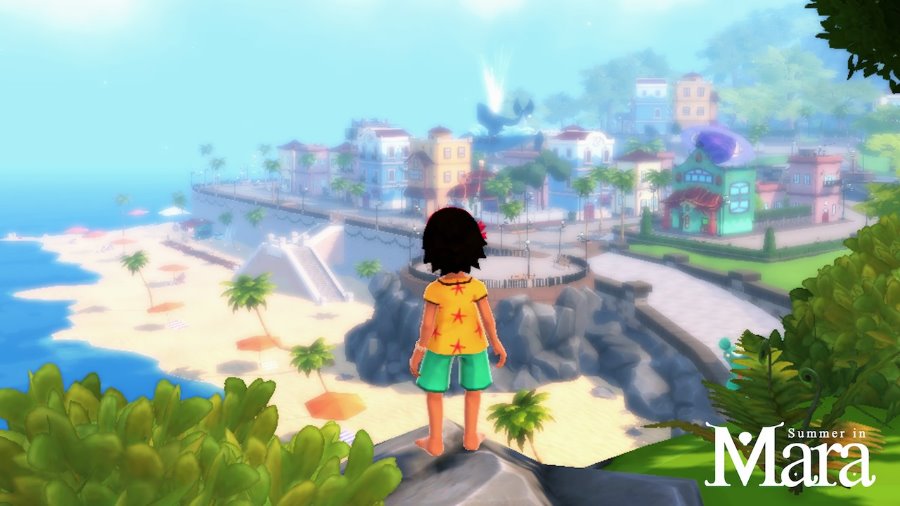 Unfortunately, after this, things take a bit of a turn. Yaya did her best to raise Koa as her own, teaching her a lot about life and what she needed to do to survive on the island… which is a good thing because time ended up catching up to Yaya, taking her away. After this, you’ll play as an older Koa – eleven years of age – who now has to take care of all stuff in life on her own. The farm is not what it used to be, so you’ll need to slowly but surely make some progress in bringing it to its former glory.


Koa won’t be able to do everything that needs to be done since you’ll have to keep an eye on her stamina bar at the upper left of the screen. If you use up all of her energy, you’ll need to get some sleep to recover so that you can carry on the next day. The other option is to eat some of the consumables you’ve collected or the food items you’ve cooked in the kitchen. An orange can certainly help, but orange juice will recover more of your lost stamina – not to mention filling up your hunger meter! Once you fix Yaya’s old boat, you’ll be able to sail and explore the open sea, as you find a new island to explore and new people to meet.

As for the collectibles, there’s a ton of resources to find during your time with Summer in Mara, but there are also many items to find if you want to 100% the game! You can collect different outfits for Koa, as well as extra backpacks that you can equip on Koa’s back. On top of this, there’s a lot of trash that bad people have left around each location, which you can pick up and then recycle. There also seems to be an issue with the crabmail service, so you should definitely search for the more than 90 crabmails spread around the whole game! 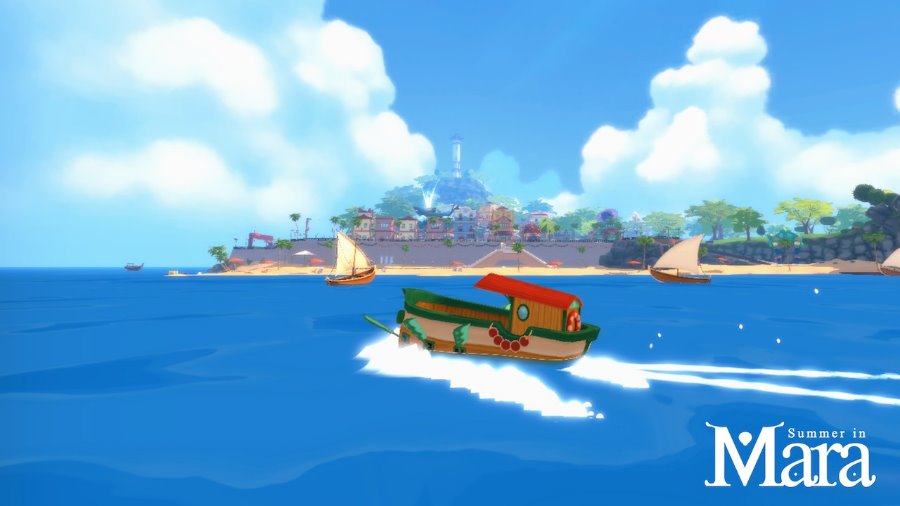 And then, we have the trophies for Summer in Mara! The game has a full list with a Platinum trophy, and it’s one that will take a while for you to unlock! There are trophies for progressing through the game’s story, for crafting a lot of items and cooking many dishes, for collecting dozens of resources, for selling items worth a total of 2,500 coins, and for finding all of Koa’s backpacks. There are also trophies for completing every single quest given to you by the special NPCs you’ll interact with, as well as a handful of trophies for specific objectives I won’t spoil here.

I had been looking forward to taking Summer in Mara for a spin, and I’m here to report that if you liked Deiland, then you’re definitely going to like Summer in Mara. It’s a more laidback experience than, say, a 3D action-adventure, so as long as you know what you’re getting yourself into, you’re going to enjoy this one. Summer in Mara is out now on PlayStation 4 with a $24.99 asking price.

Disclaimer
This Summer in Mara review is based on a PlayStation 4 copy provided by Chibig.