Paw Paw Paw from Ratalaika Games and Simpleton is a fun beat ‘em up with an animal theme on PS4. Learn more about it in our Paw Paw Paw review!


In Paw Paw Paw from Ratalaika Games and Simpleton, you’ll be taking on a colorful beat ‘em up with an animal theme, in which you’ll be controlling a group of bears who are out to defend the titular kingdom of Paw Paw Paw from the worst possible scenario. Everything was going well for the peaceful kingdom of Paw Paw Paw under the rule of King Bunnylord III. Unfortunately, one day a giant glowing red rock fell from the sky, affecting King Bunnylord III, driving him to madness. His first royal decree after the incident? To make everyone in the kingdom to wear pants! 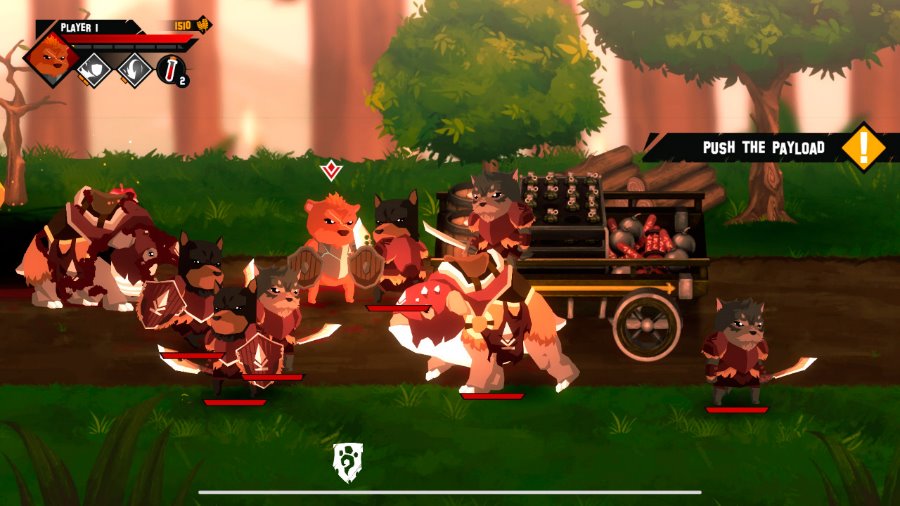 You can pick from four different bears: Kamu, Aku, Mereka, and Kita. Each of these bears will have different stats for attack power, defense, magic, and speed, so you should check them all out to see which one best suits your playing style before you commit to doing a full run of Paw Paw Paw. To give you a hint as to which one you’re probably going to like the most, Kamu is a Warrior, Aku is a mighty Barbarian, Mereka is a Botanist, and Kita is an Archer – so, yes, Kita is going to be the fastest one.


On top of this, each of the characters will have a set of passive and active skills – that require energy points to be activated – for you to consider. Kamu will have a Counter passive skill that will grant him an 80% chance to push back an enemy while blocking, as well as two active skills to charge forward with a shield for 400% damage and a heavy blow that deals 400% damage to all enemies within its area of effect. Kamu will have a windup passive skill that grants an improvement to attack speed after every attack, a heavy throw to launch the weapon for 2005 damage and hook slam to slam in front to deal a massive 600% damage.

With Mereka being a Botanist, it will have access to a satchel passive skill that grants an extra five inventory slots, as well as one very useful active skill: aromatherapy, which releases a therapeutic mist that restores 20% health to yourself and any nearby allies. The other active skill will be tangled, which will throw three plants that will trap and entangle any enemies that step on them. Kita will have a charged arrow passive skill that will grant extra energy when attacking with an arrow and a pair of active skills that complement its class: precision shot, which launches a powerful attack that deals 400% damage, and piercing rain, which shoots a rain of arrows over an area of effect for 300% damage per hit. 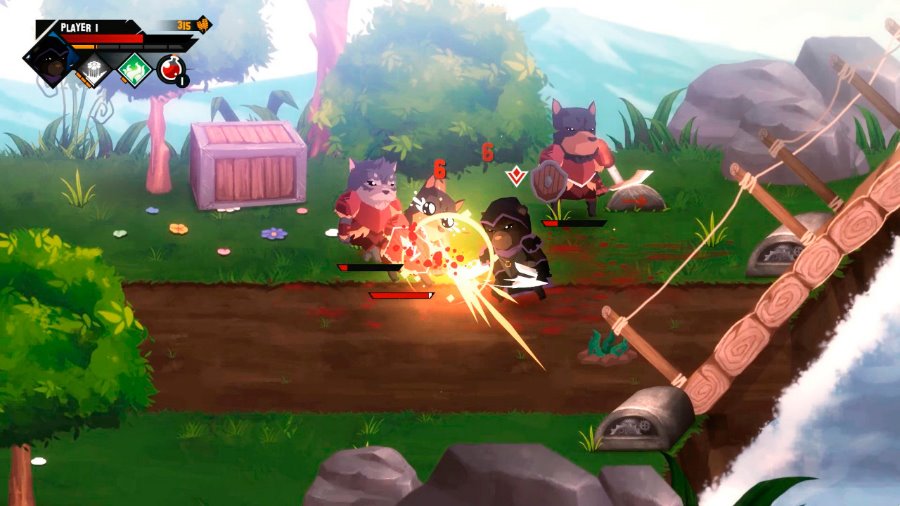 You’ll move your character with the left analog stick or the D-Pad, jumping with the X button. The Square button will be for your light attacks, with the Triangle button giving you access to more powerful but slower heavy attacks. The L2 button is for blocking, which will allow you to lower the overall damage you receive. The R2 button will allow you to roll, which will be the most important ability you can use. Why? Because when you roll, you’re invincible! The right analog stick will be used to switch between the potions and juices so that you can use them with the Circle button. The L1 and R1 buttons will be used to activate your available active skills.


You can obtain new weapons while exploring each of the game’s stages, but most of your weapons will probably come from the Armory, where you can find one-handed and two-handed weapons, light weapons, bows, and even a shield to protect you from harm, allowing you to block some damage – as long as your character can equip shields! On that note, not all characters can equip all weapons. For example, Aku won’t be able to equip one-handed weapons, light weapons, bows, or shields, making it an all-out close-range melee character.


There’s also the option of training your character to improve its stats and abilities with the skill points you obtain from leveling up. You can unlock new combos, add skill upgrades, boost a character’s inventory space, add new skills, or add a boost to weapon mastery so that your character can equip weapons of a higher tier. It’s not as robust a skill tree as what you’d find in, say, an action RPG or a roguelike adventure, but it’s good enough to get the job done, offering some extra configuration options for your fighter. 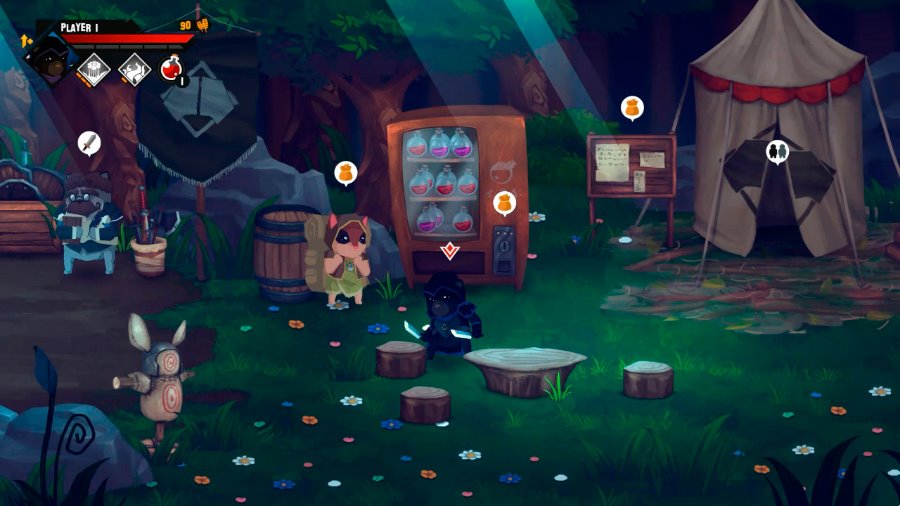 Since this is a beat ‘em up adventure you can take on your own or with up to four players in local multiplayer, there’s also the option of spending some of the in-game currency to hire a recruit to join your cause. Perhaps you’d like to hire a swordsman to complement your fighting power? Or maybe it would be best to hire an archer who can attack from a safe distance as you rush in to give it your all? Just be sure to collect all of the food and items you find in your path so that you can have enough to spend away on a trusty companion!

The in-game currency can also be spent at the Brew House to purchase potions or juices to aid you on your quest. Potions and juices will come in small, medium, and large sizes. Depending on its size, a potion can help you recover 25%, 50%, or 75% of your character’s maximum health. Juices will help you recover two, four, and six bars of energy depending on their size. Always be sure to have some potions on you since they can save your life when you’re greatly outnumbered!

With a new Ratalaika Games release comes a new chance to get a new Platinum trophy for your collection! The trophy list is not a short one, with a bunch of Bronze trophies, plenty of Silver trophies, and a little over a handful of Gold trophies. Several of the trophies will be tied to progressing through the game, with others tied to defeating the different bosses you’ll find in your adventure. The rest of the trophies are tied to objectives such as your character reaching level five, dying ten times, rolling 50 times, and breaking ten chests or barrels. 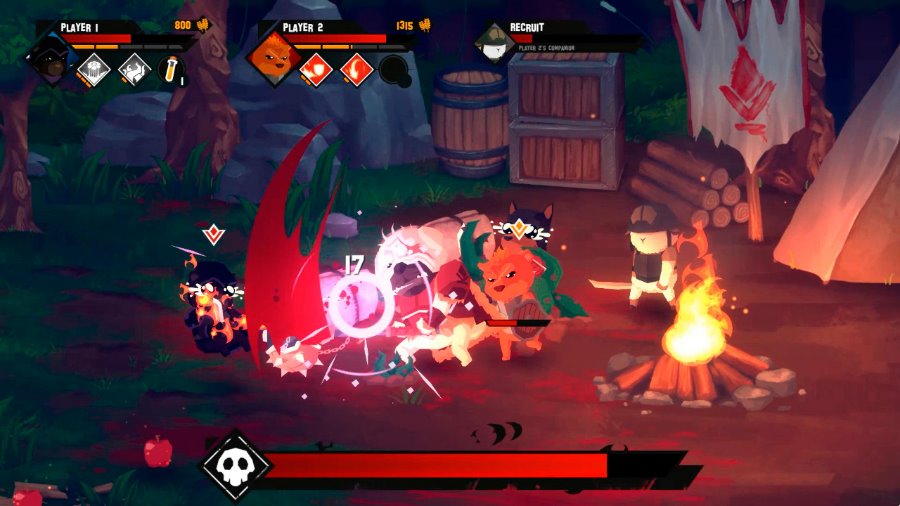 Paw Paw Paw is a fun beat ‘em up with an animal theme you can take on your own or with up to four players in a local co-op setup, all for a low $9.99 asking price. It features solid gameplay mechanics, combos to unlock, companions to hire, and a bunch of weapons to unlock. If you’re a fan of beat ‘em ups, this is a good option on PlayStation 4.

Disclaimer
This Paw Paw Paw review is based on a PlayStation 4 copy provided by Ratalaika Games.