In Transformers: Battlegrounds from Outright Games, Megatron and the Decepticons have invaded and are close to capturing the Allspark. Because of this, Optimus Prime, Bumblebee, and the rest of the Autobots must come together to battle the evil Decepticons, repelling the invasion before it’s too late. You’ll be taking on a turn-based tactical RPG on Nintendo Switch, as you command the best group of Autobots to take care of each particular battle. 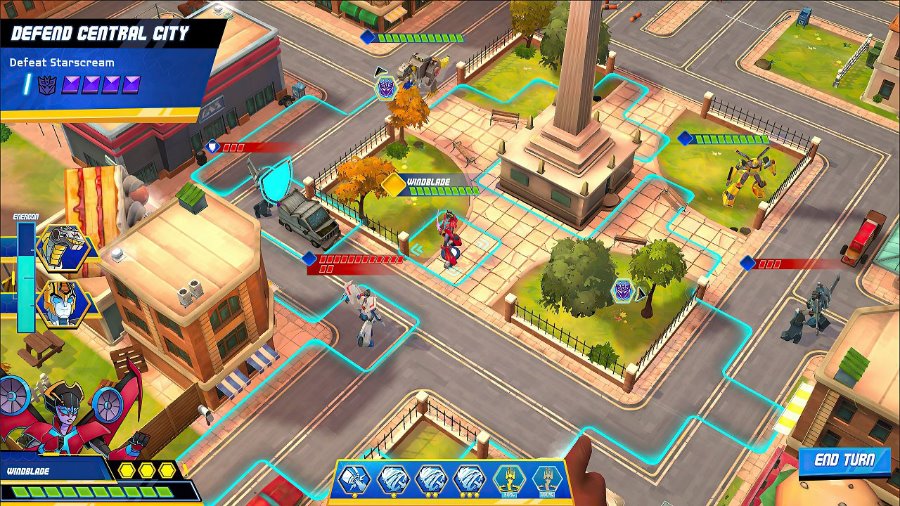 You could think of this new Transformer release as a game similar to, say, the long-running X-Com series, except that, as is to be expected, things are a bit more streamlined given its Everyone 10+ ESRB rating. You’ll definitely need to check out the game’s tutorials to see how things work in this turn-based tactical RPG with a Transformers twist, but if you have experience with the turn-based tactical RPG genre, you’ll feel right at home with this one. It’s a more colorful release, given the source material, but you get the idea of what to expect.

Transformers: Battlegrounds is split into Story Mode and Arcade Mode. In Arcade Mode, you can take on local single-player or multiplayer matches in one of five modes: Capture the Flag, Decepticon Grudge Match, Energon Capture, Last Stand, and Destruction. In Capture the Flag, you must grab the Decepticons flag and bring it back to the Autobots base three times to win. For Decepticons Grudge Match, you’ll play as a squad of four Decepticons going up against two Autobots. In Energon Capture, you will have to capture and defend Energon Ore Deposits for ten turns. Last Stand has you taking on a never-ending Decepticon army. Destruction will give you a group of four Autobots to deactivate as many Decepticons as possible within ten turns. 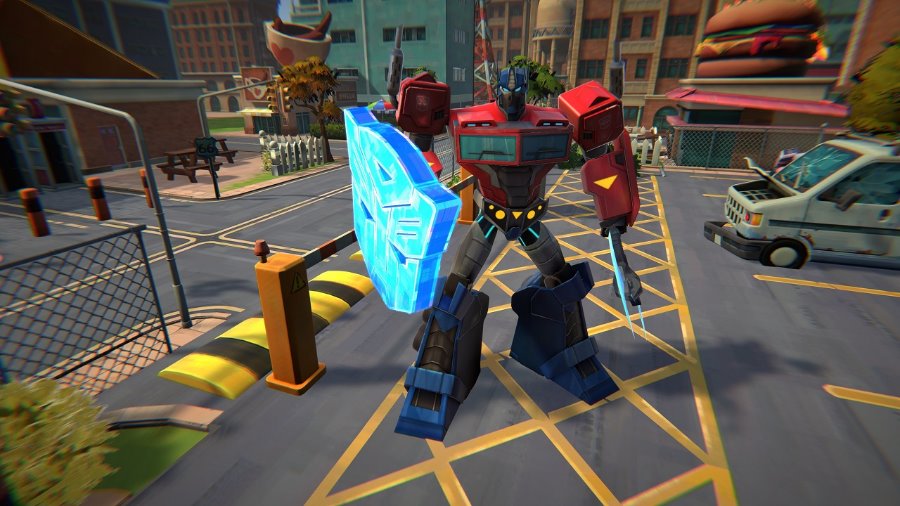 Story Mode is the main experience in which you’ll first take control of Bumblebee as you put together a group of Autobots to go up against the invading Decepticons. The first step of this plan will require him to enlist the help of a human who seems to have defied the city-wide evacuation order after the Decepticons pretty much started to rain down from the skies! As it turns out, this particular human… is you! Your task will be to command the Autobots as you make the most of their individuals pros and cons so that you can maximize their damage output and use their abilities to deactivate all the Decepticons in each stage.

During each turn, you’ll control the Autobots in your group so that you can equip one of the abilities from the Action Bar by pressing the L and R buttons for said Autobot to use it. Each of these will require that you spend some of your Action Points, which is the game’s way of balancing things. You will also need to move the Autobots around each map in order to flank the Decepticons, find and use cover, and make the most of the abilities that have an area of effect to consider while also using Action Points for attacks. 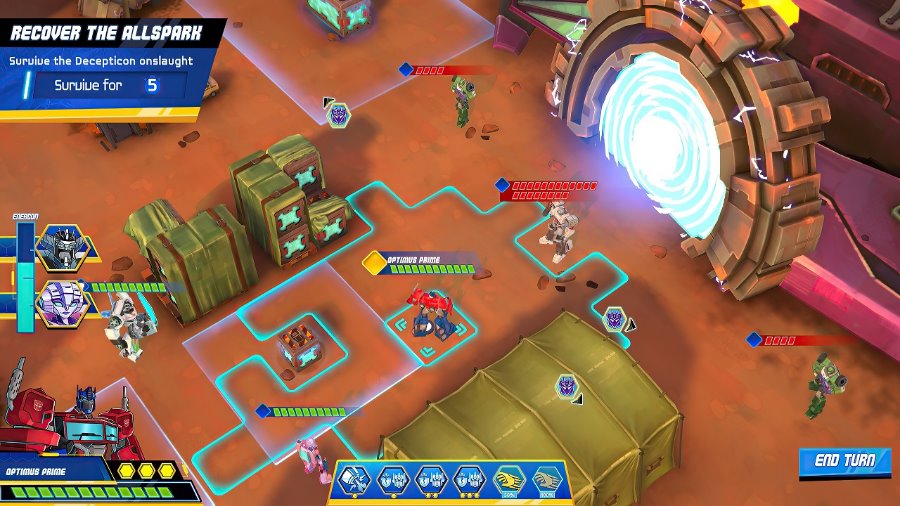 Each Autobot can move during their turn to any of the squares within its movement range. Every Autobot in your group will also only be able to attack once per turn, so make sure that every attack you plan counts! You’ll have three action points per turn to move and attack, so you can decide to move a unit over a larger space or use a more powerful ability that will end up draining all of your action points. The more Action Points spent for an ability, the greater its power!


You will have an Energon meter on the left side of the screen that will fill up as your Autobots move or attack, or if any Autobot ends its turn with some Action Points still left. When the Energon meter reaches the halfway point – or once it’s full – you’ll get a chance to unleash a devastating Ultimate ability that can certainly turn the tide of battle. Each Autobot will have a different Ultimate ability, so you’ll have to experiment a bit to see which one is more useful during particular scenarios. 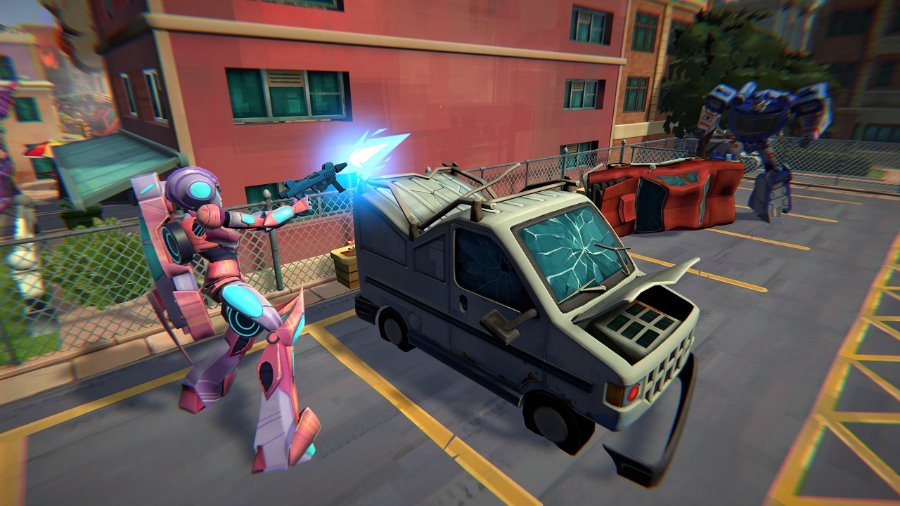 As you complete each mission, you’ll be rewarded with Spark Points. These Spark Points can be spent over at Wheeljack’s Lab to unlock new abilities for each individual Autobot, as well as for the different Autobots classes. You could add a heavy close-range melee attack, an overwatch ability to automatically fire at an enemy as it enters your range, a precise shot for Bumblebee that will fire with a high chance of anchoring its target, or a fire breath attack for Grimlock, to name some examples. You can gain extra Spark Points by replaying a mission on a higher difficulty rating.


Transformers: Battlegrounds features an in-game achievements system for you to take on a large list of objectives on your path towards completing 100% of the game. These include things such as completing each mission and story act in each of the difficulty settings, shoving a Decepticon into another Decepticon, deactivating a Decepticon using Optimus Prime’s Throw Back ability on a Thursday, performing 50 Ultimate abilities, destroying a hot dog stand in each mission in act 1, or repairing an ally with 1 HP, to name some examples. 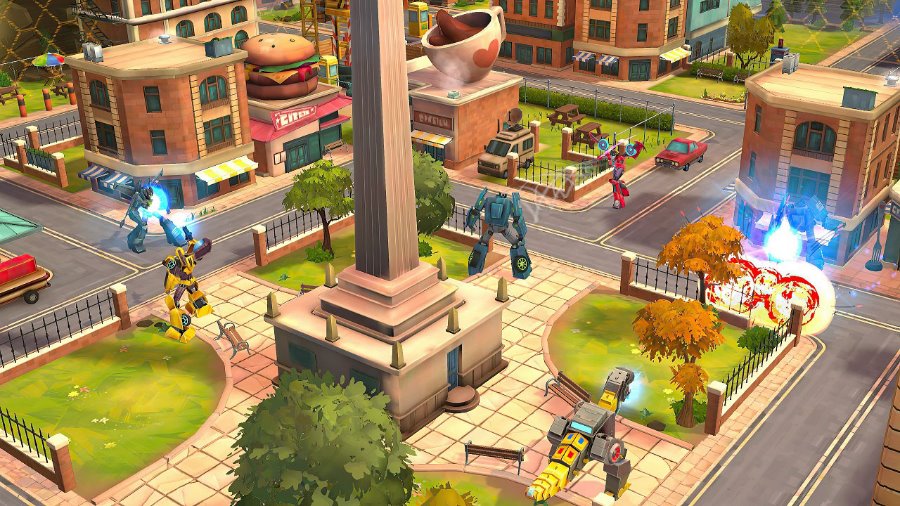 Transformers: Battlegrounds is a fun turn-based tactical RPG on Nintendo Switch that showcases many of the beloved Autobots and Decepticons in the long-running series in a new genre. There is some slowdown here and there as you play – which showed up when playing in Docked Mode and in Portable Mode – but since this is a slower-paced turn-based tactical RPG and not, say, a third-person action game, it was not a deal-breaker. Transformers: Battlegrounds is available for $39.99 on its own, or you can grab the deluxe edition from the Nintendo eShop at $49.99, which includes the base game, as well as the Gold Autobot Skin Pack, Energon Autobot Skin Pack, Battle Autobot Skin Pack, Neon Autobot Skin Pack, and the CUBE Game – Arcade Add-on.

Disclaimer
This Transformers: Battlegrounds review is based on a Nintendo Switch copy provided by Outright Games.