In narrative-driven single-player 2D action-adventure Phoenotopia: Awakening from Cape Cosmic, you’ll be taking on a journey that at times reminded me of Zelda II: The Adventure of Link by way of Cave Story. The project started its life as a flash game on Newgrounds over six years ago. The team had then set its course on developing the sequel for the game, but around the two-year mark, Cape Cosmic decided it would be best to set their sights on reworking and remaking Phoenotopia for a Nintendo Switch release, and this is what led to us having Phoenotopia: Awakening! 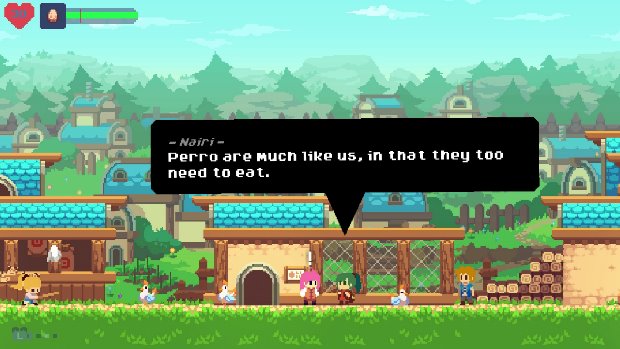 Phoenotopia: Awakening takes place after the Great War that almost ended humanity. Battle after battle, it seemed that humanity was on the brink of extinction until they had a breakthrough: the Phoenix! Thanks to its immense and limitless power, the war ended in a flash. Unfortunately, by that time, the Earth could no longer sustain life. Because of this, the Last Council decided that it would be best for mankind to burrow deep underground, building massive metal bunkers where humans would sleep until the Earth had recovered from the massive devastation brought forth by the Great War. It’s now been centuries since the end of the Great War, and the Phoenix is nothing more than an entity of myth and legend. The humans have awakened, walking onto a new Earth, ready to start civilization anew.


You’ll be taking control of Gail, a villager who ends up setting out on an adventure when a great starship shows up in the middle of the night, abducting all adults! Who took all the adults away, and why? Gail must set forth on a journey that will have her discovering the many evils lurking in the shadows as she gains new tools and abilities that will help to bring her closer and closer to the truth. 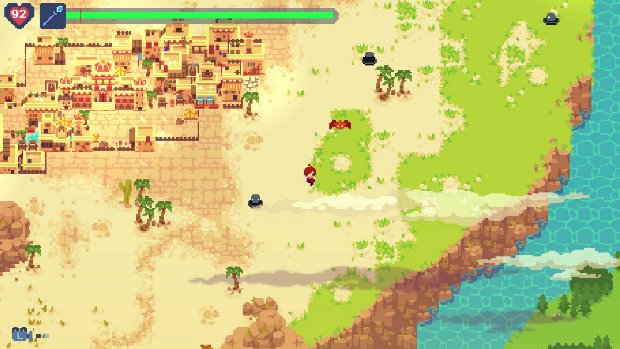 The Zelda II: The Adventure of Link influence can be experienced as soon as you set foot outside of your village since you’ll enter an overworld map. Walk around for a bit, and enemies will pop up. Come into contact with one of them, and you’ll enter a short 2D side-scrolling section where you’ll have to go up against a bunch of monsters. At first, this will include small enemies such as blue slimes with a jiggly antenna or overgrown frogs that love to jump and try to crush you, but later on, you’ll end up running into larger foes, as was the case in the classic game in the long-running The Legend of Zelda series.


You can control Gail with the left analog stick or the D-Pad, running with the ZR button, and jumping with the B button, and zooming in and out with the L button. The A button will be used for interacting with things or NPCs, and you can grab onto objects with the R button to push or pull them as needed. You can also grab and pick up some boxes, which will be useful for solving some puzzles or for finding extra items. If you press down, you’ll be able to crawl through tight spots. Press the ZR button when crawling, and you’ll do a roll! The roll is very important since you’ll be invincible during said action, which will be very useful during boss fights! If you find any consumable items, you can equip them from your inventory to then press the Y button to consume them. Do be careful because each item will require a set amount of time to be consumed, which could leave you open to an attack! 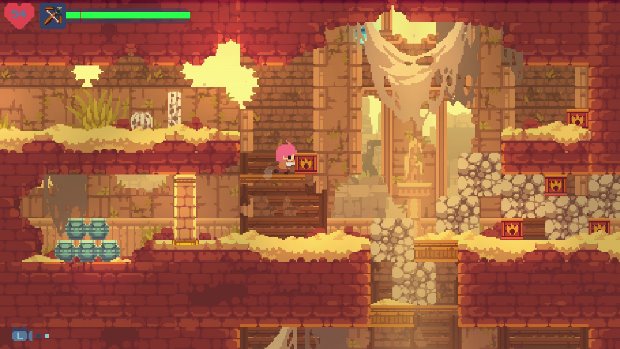 Speaking of attacks, the A button will also be used for attacking your enemies, and if you press and hold down the button, you can prepare a charge attack. You need to be careful when you attack because every swing will use up some of your energy, and if you try to go all out and unleash too many attacks, those at the end of the flurry won’t be as effective. Running will also drain your energy, so do keep this in mind! You need to plan your actions, or else you might find yourself without any energy left as enemies close in on you.


Raw items you collect, such as a Perro Egg or Mystery Meat, can be cooked over a fire, as long as you have it equipped. If you confirm you want to cook something, you’ll be able to enter a short cooking mini-game. During this short segment, you must press the changing icon for the A, B, X, or Y buttons as said icon moves over a specific area of a bar, and must do this several times before time is up. Do things right, and you can find yourself with a tasty rolled omelet to heal your wounds. Mess things up, and you’ll end up with “Food,” which will make you lose hit points if eaten! 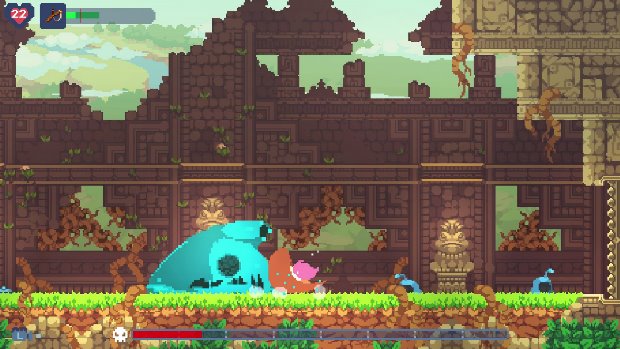 Since you’ll be gathering many items in your inventory – split into consumables and items you can put to good use over and over again, as is the case for the slingshot you get early in Phoenotopia: Awakening – you can set them to the quick wheel that you can trigger with the right analog stick. Just select an item in your inventory, move the right analog stick in one of the eight directions of the quick wheel, and press in on the stick, and you’re set! When taking on the 2D action platforming segments, just move the right analog stick to the slot to which you equipped the item you want to use, press in on the stick, and you’ll immediately equip it so that you can use it with the Y button.


As you defeat enemies, break boxes and vases, and open up treasure chests with the might of your bat, you’ll end up collecting a bunch of RIN. RIN is the official currency of Castella and other regions and comes in bronze, silver, and gold variants of increasing value – they’re worth one, three, and give RIN, respectively. RIN can be used to purchase consumable items so that you always have something to eat, because all enemies pack a punch, and you can be dead in a few hits!

Phoenotopia: Awakening features a variety of badges that act as its in-game achievement system, with a variety of bonus objectives to complete, which is perfect for those of you who like to 100% the games they play. There are badges for acquiring Heart Rubies, catching a ton of fish, striking enemies thousands of times with a quick swing of your bat, dealing more than a hundred charged attacks, sleeping at every location that allows you to do so, breaking 250 boxes, acquiring dozens of Energy Gems, cooking over 40 times, or upgrading your inventory to its maximum capacity, to name some examples. 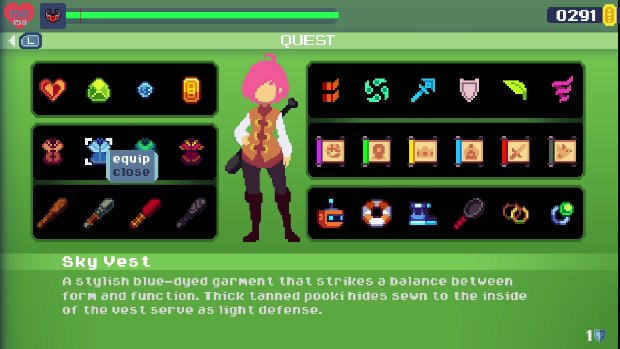 Phoenotopia: Awakening is a must-play on Nintendo Switch. It has a ton of content, a colorful and detailed art style, fun gameplay mechanics, and a good challenge in this Metroidvania-style release that pays homage to games such as Zelda II: The Adventure of Link and Cave Story. You should definitely check out the game’s soundtrack, which you can purchase over on Bandcamp by clicking right here. Phoenotopia: Awakening is out on Nintendo Switch for $19.99.

Disclaimer
This Phoenotopia: Awakening review is based on a Nintendo Switch copy provided by Cape Cosmic.

Where The Heart Leads Sets Course Towards 2021