Explore the world after a plague has caused mass mutations around the world as you take on the Acolytes. Check out our Morbid: The Seven Acolytes review!


Morbid: The Seven Acolytes is a Horrorpunk Action RPG filled with Lovecraftian horrors and Cronenbergian gore, making it the most gruesome take on the isometric Souls-like genre yet!

You are the last surviving Striver of Dibrom. Your duty, for which you have trained your whole life, is to defeat the Seven Acolytes, accursed and powerful beings, possessed by malevolent deities called Gahars.

Challenging foes, mini-bosses, and memorable large-scale boss fights with fully orchestrated music are central to the world of Morbid. To overcome these obstacles you must master the combat, as well as improve your character and gear through a wealth of elements such as Quests, Perks, Runes, Upgrades, and Looting.

The Gahars have bound their twisted minds to the flesh of the Seven Acolytes, for without hosts they cannot survive. You must slay the Acolytes, thus ridding the Gahars of their flesh. Succeed, and you’ll free the kingdom from the heavy yoke of their terror. Fail, and the malicious gods rule on, as the Acolytes rise anew, and madness prevails.

-Experience epic, brutal boss encounters and explore a diverse array of environments
-Perk leveling system with multiple ways to build your character
-Deep, immersive lore with NPC’s to meet throughout the world
-Health, Stamina, and Sanity management is important as you traverse the world


Morbid: The Seven Acolytes is a new isometric Souls-like indie title. In the past, I typically haven’t gelled with games of this new subgenre, but something about the game’s trailer made me want to give this one a shat… and I’m glad I did! Morbid: The Seven Acolytes is a Lovecraftian themed game with an isometric viewpoint and great pixel art. You’re a warrior: the last Shiver. You have been tasked with stopping the evil in the world. Beings called the Acolytes have caused a plague that has mutated things in the world into monstrosities, and you need to stop all of them, including the Acolytes. There isn’t much more story for this one, and there doesn’t need to be since the primary focus is on the action. 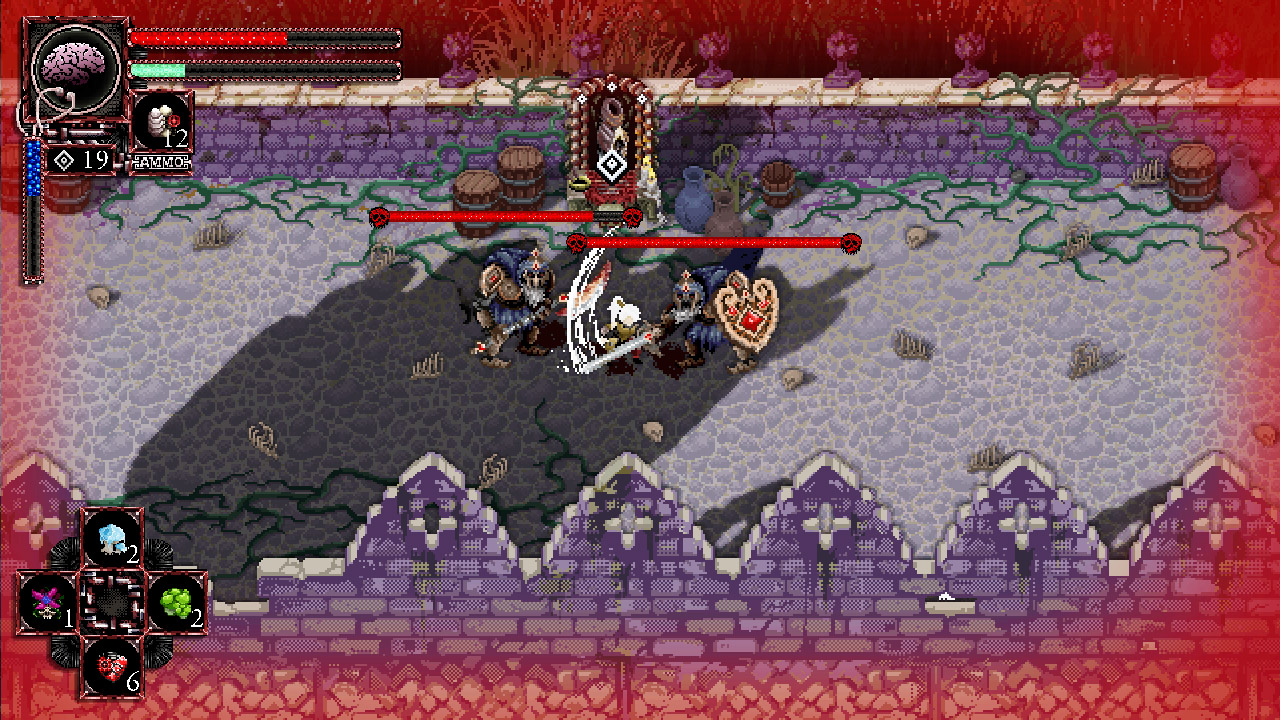 I was actually surprised how quickly I picked up Morbid. The game has some simple controls, with attacks and the all-important dodge roll for avoiding attacks, and you will be dodging a lot. You will also be able to pick up different weapons as you play, with a nice mix of ranged weapons with ammo and close-range melee weapons. They are upgradable with relics, which really changes how they perform, which is something I liked. I preferred the faster, lighter damage weapons as I was able to have a better reaction time against the monsters I fought against. I did some of the larger swords, but they did need me to readjust to their slower speed.


As mentioned, you can tell the Souls games have been an inspiration for Morbid. The game’s difficulty has been dialed up to 11. You can take only so many hits before you’re dead, so keeping an eye on your enemies and predicting what they’ll do next. One of the things you might find a bit frustrating is the inclusion of a stamina bar. As expected, every action you take will constantly drain it. I often found myself struggling with this aspect of Morbid, but with some patience, you can find the right rhythm to allow the stamina bar to recover as needed.

I was a bit surprised that the only things you could find were weapons and that different armor pieces were not an option. I’m not sure why, but you can’t sell weapons, so you can only discard them when you run out of room and need to make some. You’ll be doing this fairly often, and it just seemed like a waste. And instead of a traditional leveling system, you are granted blessings, which you can switch around. As you play, you can equip more of them and change how your character plays and feels in battle. I found myself putting blessings in health and stamina regeneration since I found that was most effective for my playing style. 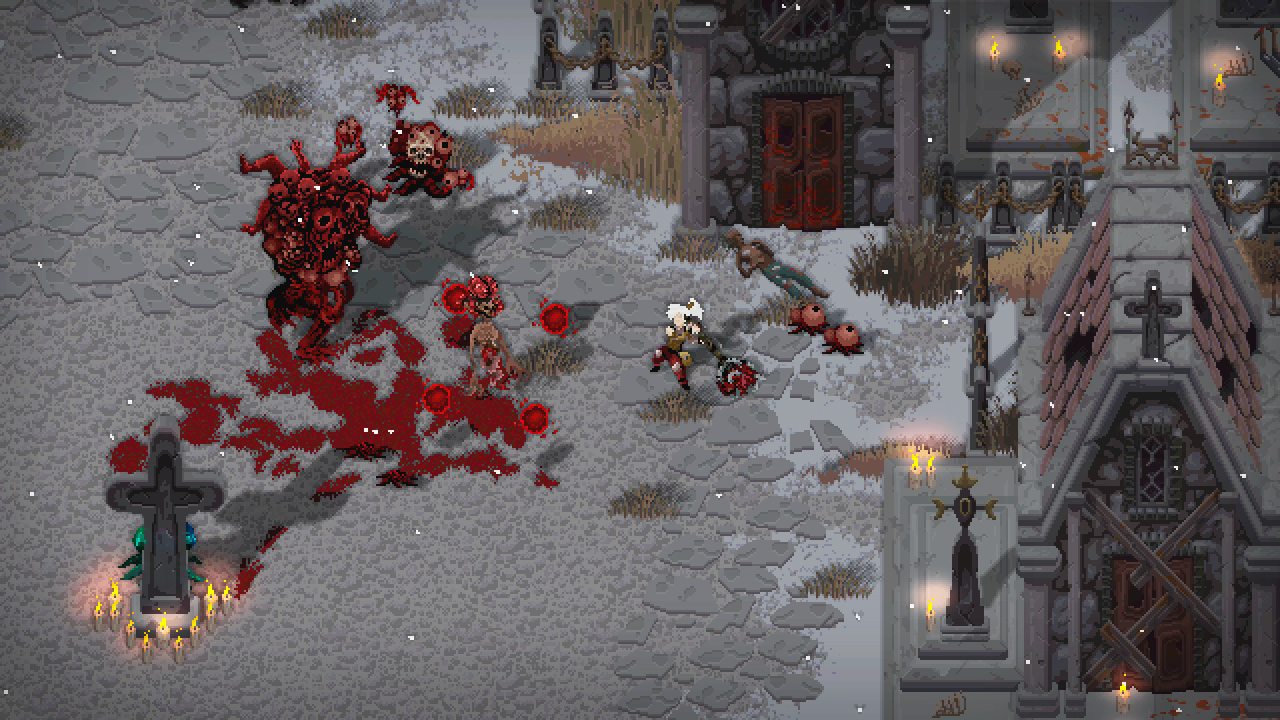 I loved the pixel art of the game mixed with the light Lovecraft-themed visuals throughout the game. The developers went with a muted color palette for the world you’ll explore, which makes sense given the overall theme – why would we have bright colors in the apocalypse? It does make the blood really pop out as creatures explode, and you cover the screen with the bodies of your defeated opponents.

The creature design was really cool as well, with lots of unspeakable horrors presented in all of their digital pixilated glory. I was surprised by the wide range of creatures that you must destroy, making it necessary to learn quite a few different tells so that you can find the right window of opportunity to attack. What really impressed me was the design for the mini-bosses and bosses. These things were taken right out of nightmares and put on screen! Each one had a unique look and feel – on top of being quite challenging – making them the highlight of this experience. 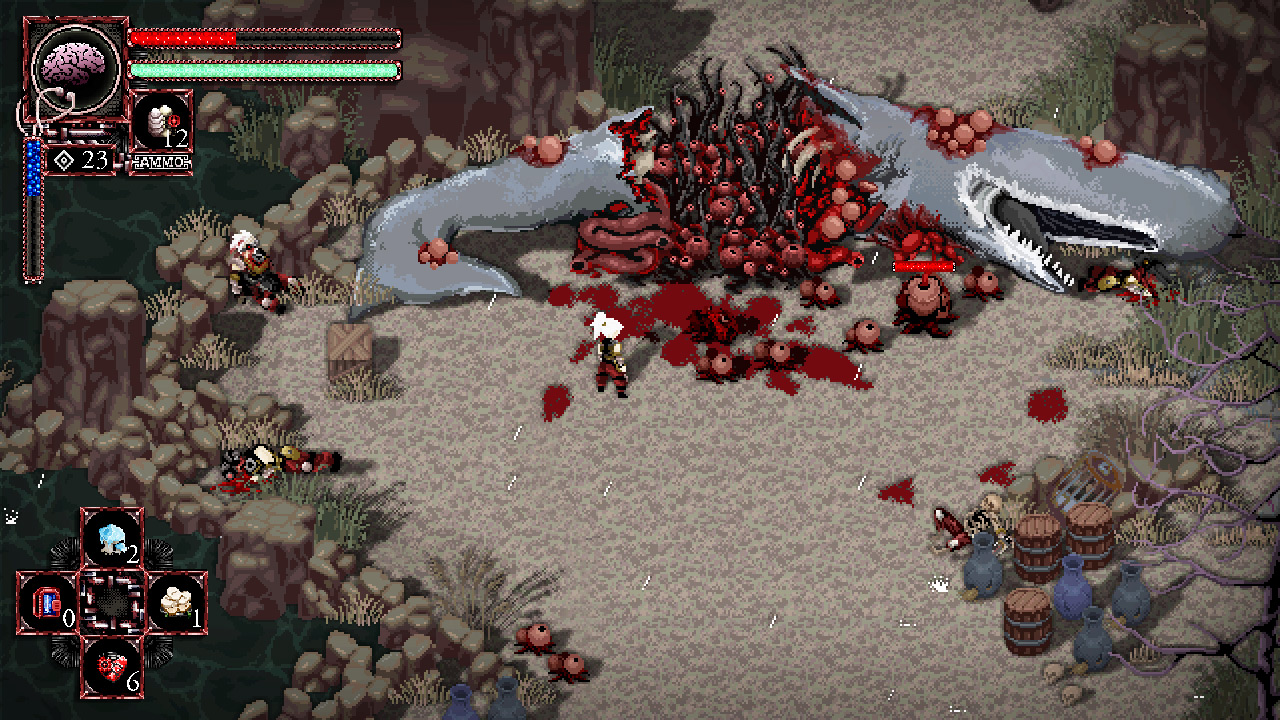 I was actually surprised how much I enjoyed Morbid: The Seven Acolytes as it’s not usually my type of game. I have not been fully converted to being a fan of the genre, but I think I appreciate it more than I did before. It’s a challenging but rewarding experience once everything clicks, but do be ready to die a lot. It’s a good game to check out if you are a fan of the genre and you have wrapped up Demon Souls. 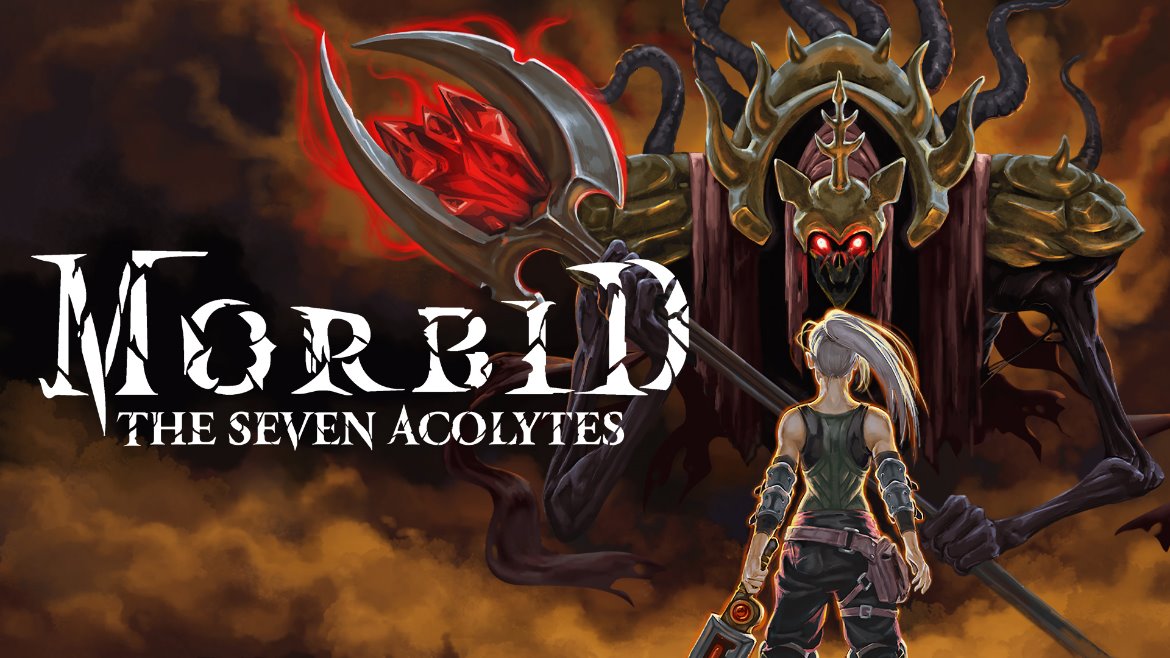 Challenging but fun action game with a Souls-like vibe

Disclaimer
This Morbid: The Seven Acolytes review is based on a Switch copy provided by Merge Games.