As you can tell from its name, Evolution Board Games from North Star Digital is the video game adaptation of the award-winning physical version of Evolution. This Nintendo Switch release has been optimized for the digital age to give us a robust single-player and local and online multiplayer experience at home or on the go. The game offers 21 single-player matches to play in its Campaign, local and online multiplayer, as well as asynchronous play, so you can always find a match to experience. 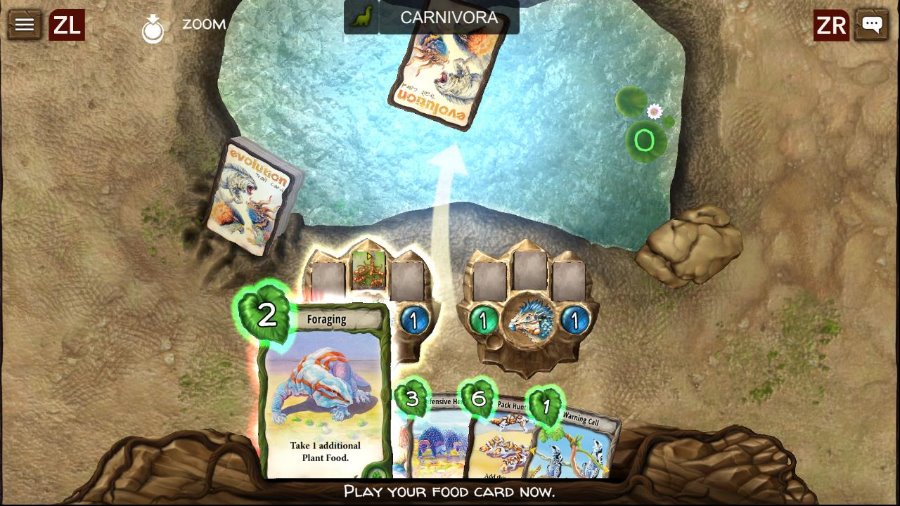 If you’re new to Evolution, you can have the game teach you the basics so that you can know what you’re getting yourself into – and yes, there’s also the option of skipping the tutorial and getting right into the action! The goal for each match of evolution is simple: you have to eat the most food! As your species and that of your opponent gather around the watering hole, you’ll need to outplay, outsmart, and overpower your competitors to be victorious. To be able to succeed, you’ll need to add population to your side of the playing field so that you can eat more food. As you select cards with the A button, you can play them as population by pressing the Y button.


Since you’ll be competing for food, you need to keep an eye on your population because whoever doesn’t get a chance to eat will starve… and die! To be able to survive, you’ll also have to adapt. Depending on the cards you have, you can add traits to your species. Take, for example, the Foraging trait. Once you select a card with the A button and add it as a trait with the X button, you’ll get to see how your species is granted new abilities. Thanks to the Foraging trait, your species will adapt to eat faster, which could allow you to collect all food in play, starving your opponent! 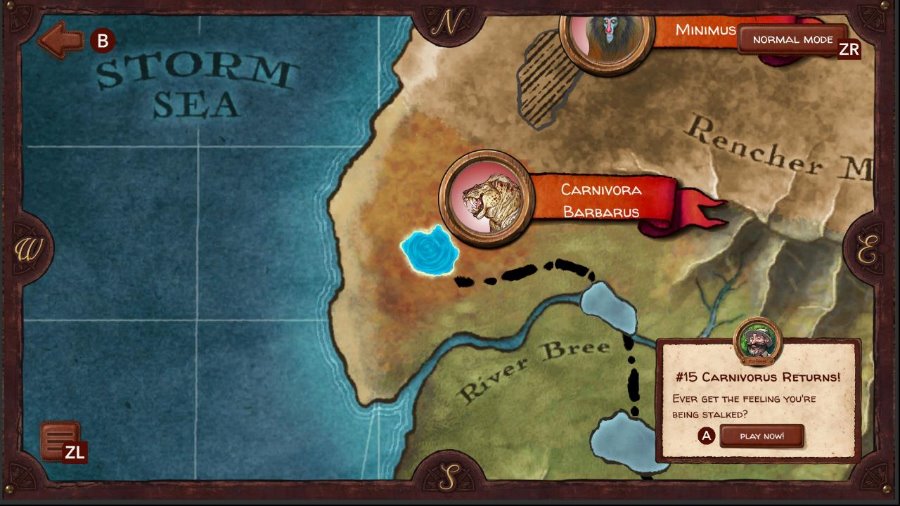 Cards can also be used to create new species around the watering hole. For every species that you keep alive, you will get an extra hand, which can certainly be very useful when trying to adapt and add the best traits to your available species to keep them all alive. Every round, you add food to the watering hole, which is represented by the number on the corner of each card. A round will end when all species are fed or the food has run out, so you need to make the most of the cards you have and decide if you’re adding a trait, creating a new species, or adding to its population. It’s very important that you pay attention not only to the actions you perform but also to what your opponents are doing. If you change your mind about a choice you’ve made, you can press the L button to undo it.


Once you’re in the final round, you might want to be a bit more aggressive with your actions. Your final score will be the amount of food you ate, plus the surviving population, plus the traits on said species, so be sure to pay close attention to the cards you’re dealt for that final hand so that you can maximize their potential. Perhaps adding a Longneck trait to one of your species so that it collects one piece of food might not seem like a big boost during the final round, but that piece of food might be the difference between one of your species surviving… or one of your opponent’s species starving! 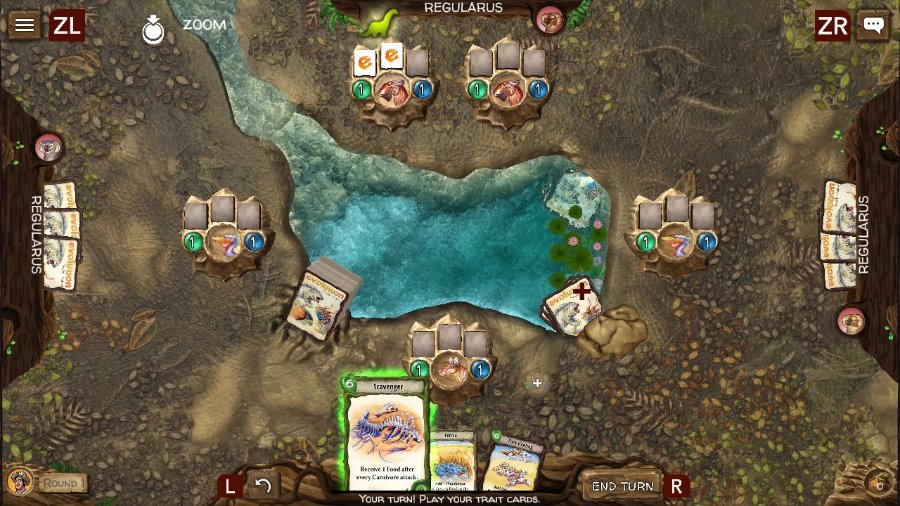 Something else to consider is what type of species you and your opponents are playing as. Herbivores will eat plant food, while carnivores will eat other species! Carnivores can’t eat plant food, so if you find a way to defend your herbivores against them, you can starve them in a single round! For this, you need to consider a carnivore’s body size so that you can fortify your species by playing a card to add it to body size instead of as population. The food chain is the law of nature, with the big eating the small!


As you win matches, you’ll get to earn different discoveries to add to your overall rank progress. You’ll start your journey as a field intern, with your first rank boost taking you towards becoming a biology student. After this, you’ll have to work hard towards boosting your score to move up the ladder towards freshman, sophomore, and beyond! For every grade, you need four discoveries to rank up to the next spot. You’ll reach a point in which you’ll only earn discoveries when playing against harder AI opponents, and after that, you can only earn discoveries in multiplayer matches – against local or online opponents. Speaking of multiplayer, you can also earn bonus discoveries for every human you beat in a matchmade multiplayer session, for each day that you play a matchmade multiplayer session, and for consecutive multiplayer wins. Do you have what it takes to climb high enough to get access to the seasonal tournament? 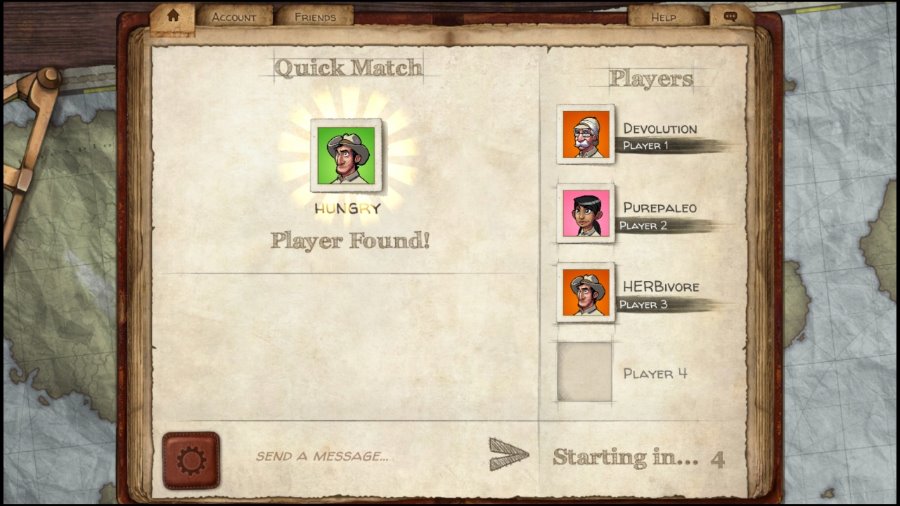 Evolution on Nintendo Switch does a great job of bringing everything that the physical board game has to offer into the digital realm, offering a robust experience with plenty of content to enjoy, lots of tactics to learn, and a hearty challenge to take on. If you’re a fan of the board game, then this is a no-brainer. And if you’re new to Evolution, then this one is definitely the way to go. Evolution Board Game is out on Nintendo Switch with a $19.99 asking price, and it’s one I recommend you check out!

Discover
This Evolution Board Game review is based on a Nintendo Switch copy provided by North Star Digital.