In Chicken Police – Paint it RED! from HandyGames you’ll be taking on a Rated M for Mature noir-themed whodunit adventure game with a cast of anthropomorphic animals. The game is fully voice acted, and features a colorful cast of characters with great voice acting that really helps to bring every single one of them to life, playing into the type of animal each one is. Sure, there’s the members of the titular Chicken Police, but there’s also going to be cats, dogs, racoons, rabbits, zebras, snakes, gazelles, and more! 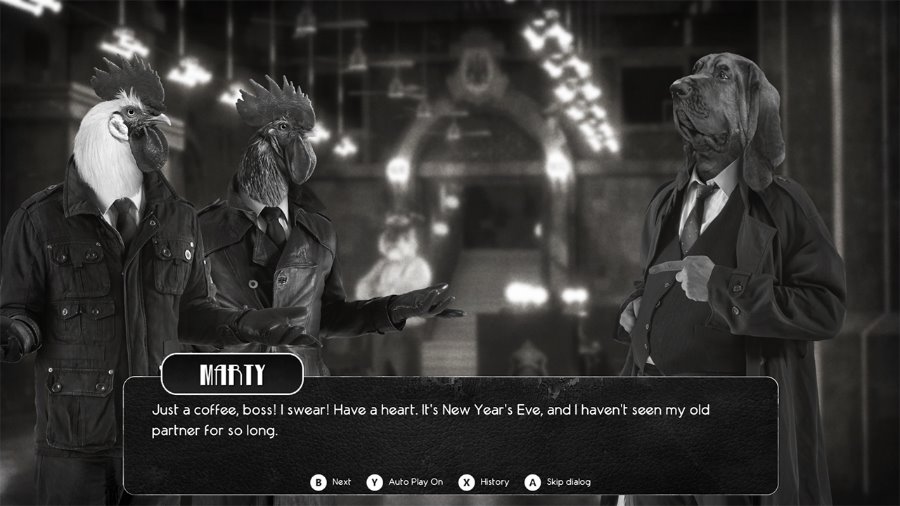 As for the game’s story, it turns out that Sonny Featherland and Marty MacChicken were indeed once known as the Chicken Police, a legendary detective-duo that were unstoppable. That was almost a decade ago, and the passage of time has not been kind to either one. It’s been a while, but a new case forces Sonny and Marty to work together, as they set out to solve the murder mystery in Clawville. You’ll get to explore more than 30 locations and will interact with over 30 characters, in a game that features more than eight hours of voice acting!


You’ll be navigating each area with the left analog stick to move the cursor on the screen, moving the camera around with the right one, toggling zoom by pressing in on the analog stick or doing a quick zoom by pressing in and holding. You can interact with objects and other characters by pressing the A button which, given the game’s nature, is going to make this the button that you press the most. Since this is a noir-themed whodunit type of game, you’ll also need to question potential suspects so that you can learn more about what has really happened.

By pointing with the cursor around the screen and clicking away on every spot you can interact with, you can end up changing your point of view, which could lead to finding some new items to add to your inventory. As to not spoil things too much, you can give this a try at the start of the game during the first scene in which you’ll meet Deborah. If you pay attention, you’ll notice that one of the drawers on your desk is open. Click there, and you’ll get a closer view of the desk, from which you can click on the desk. Inside will be your gun, your last cigarette, as well as your wallet and badge. Although the wallet is real, the badge is not, since your character’s badge was taken by the Captain. 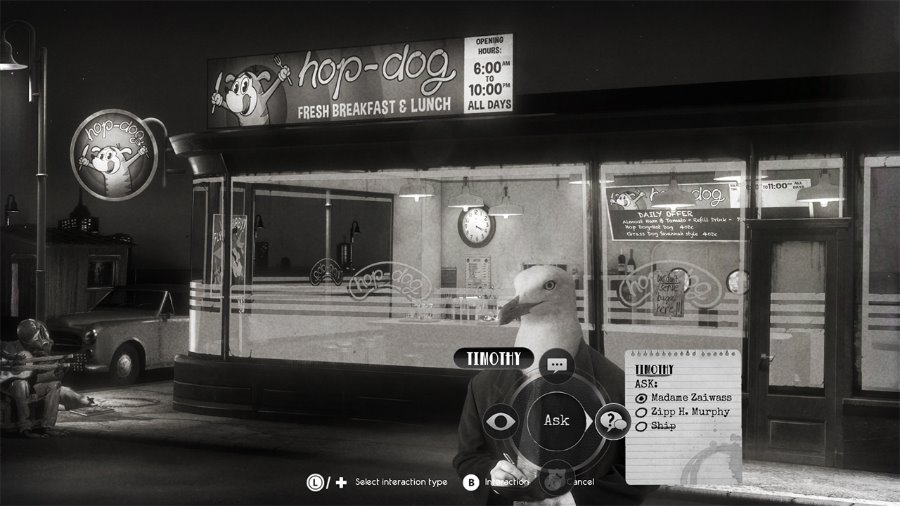 As you play the game, you’ll get to add more and more information to your notes. You’ll create new entries for the people you meet and interact with, recording their name, species, gender, and special features, as well as any particular information that could end up being useful. The same will happen for the places you visit, and there will also be entries in the codex section where you’ll learn more about things such as the City of Clawville, the Chicken Police, and the Wild Ones. As you play, clues will also be added, so that you can always review them and remember what you’ve managed to uncover so far. You can also review your stats, such as the scenes you’ve visited, the codex entries you’ve found the personal information obtained, the gallery entries you’ve obtained, the achivements that you’ve unlocked, as well as the questioning points you have.

On that note, let’s talk a bit about questioning in Chicken Police. When questioning a suspect, you should focus on what you know about each character. You will have to gather impressions from the subject, which will open up new lines of questioning. While you do all of this, you should pay attention to the Detective Meter, since it will show you if the questioning is going down the right path, or if you should rethink your approach. Each individual you question will react differently to how you approach each line of questioning, so be sure to pay attention before you screw things up!


You’ll unlock new scenes to visit as you progress through each of the game’s chapters. These scenes are split into three different types. There are main scenes, which must be explored in order to move the story forward, as well as to open up or close down locations. Because of this, some scenes will be closed, which means that they’ll remain locked from access until things change from what you do during one of the available main scenes. The last type is the limited scenes, which are only open for a specific duration. Because of this, you should be sure to always visit limited scenes as soon as they’re available. 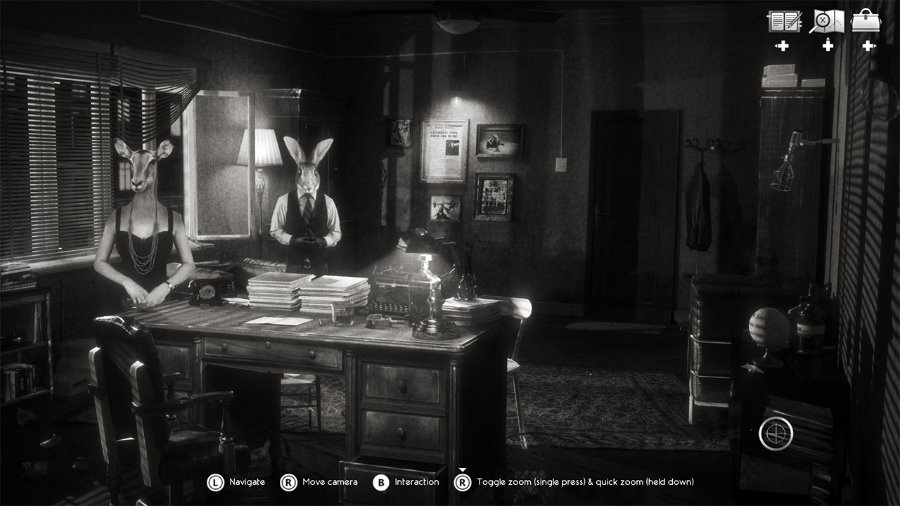 Chicken Police – Paint it RED! features an in-game achievement system for you to work on completing a long list of objectives. There are, of course, achievements that will unlock as you progress through the game and complete each of the story chapters, as well as for completing the game itself. The rest of the achievements will unlock for completing objectives such as collecting all Chicken Police novels, talking with all the characters in the game, getting all 58 art gallery images, collecting all songs for the jukebox, finishing the game without any failed questionings, and then one last achievement for getting all other achievements – what would essentially be a Platinum trophy on PlayStation. 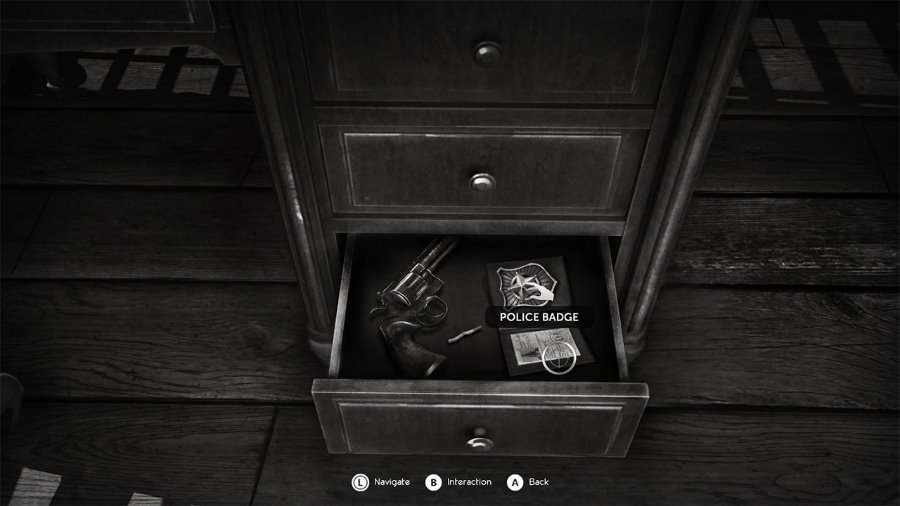 Chicken Police – Paint it RED! is an old-school infused point and click adventure game that stands out on Nintendo Switch. It presents a noir-themed story, and everything in the game, from its art style to the music to the voice acting, it all comes together to give us a must-play release for fans of the genre on Nintendo’s console. Chicken Police – Paint it RED! is out now on Nintendo Switch with a $19.99 asking price, and it’s one I recommend you check out. 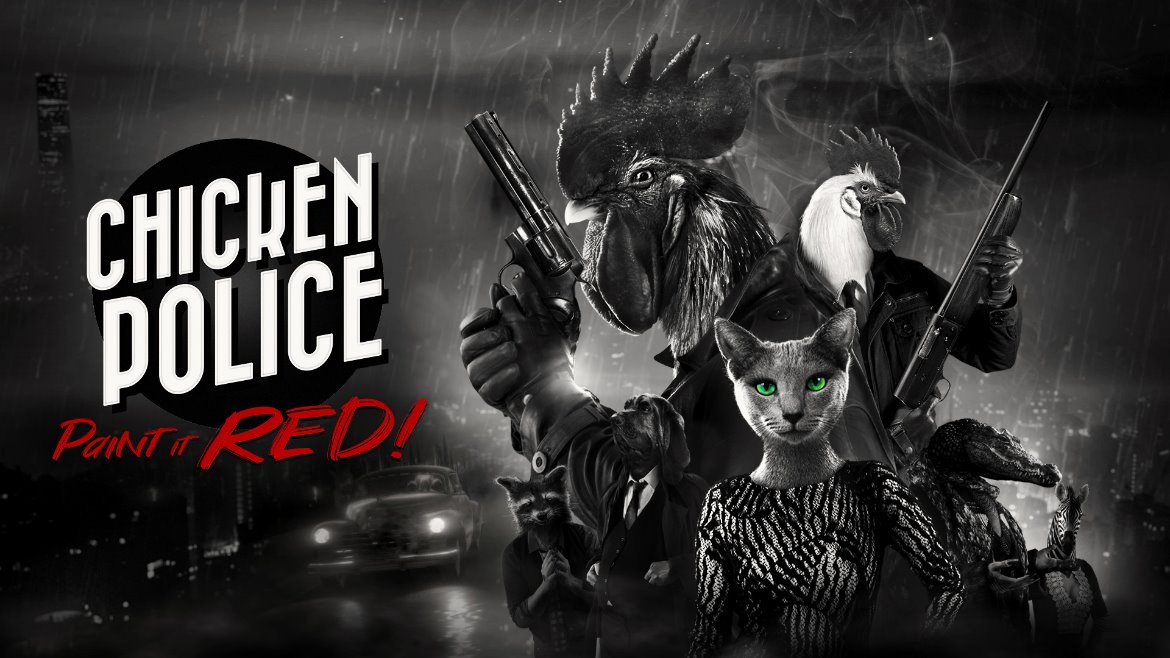 One of the best point and click adventures on Nintendo Switch

Disclaimer
This Chicken Police – Paint it RED! review is based on a Nintendo Switch copy provided by HandyGames.