In Sakuna: Of Rice and Ruin, players take on the role of Sakuna, a proud yet lonely harvest goddess who is banished to a dangerous island with a group of outcast humans. Sakuna tames the island by defeating demons using farm tools as weapons while also making ample use of her “celestial scarf,” a magical item that allows her to grapple distant enemies and platforms. Along the way, she establishes a home in a mountain village, which serves as a base of operations for crafting weapons and cooking food. Additionally, as a harvest goddess, she grows rice by following a detailed process that encompasses everything from planting to harvesting. Through this process, across each of the four seasons, she’s able to improve the harvest and hone her battle skills alike.

Sakuna is a princess goddess who has a bad habit of being rude and arrogant to the people around her. Due to her actions, she is banished – along with a few humans – to the uninhabited Demon Island, where she’ll have to fight through n order to secure the zone around her camp. The game begins in the city of Mirashira, and this segment serves as a quick tutorial for the different moves Sakuna can execute. 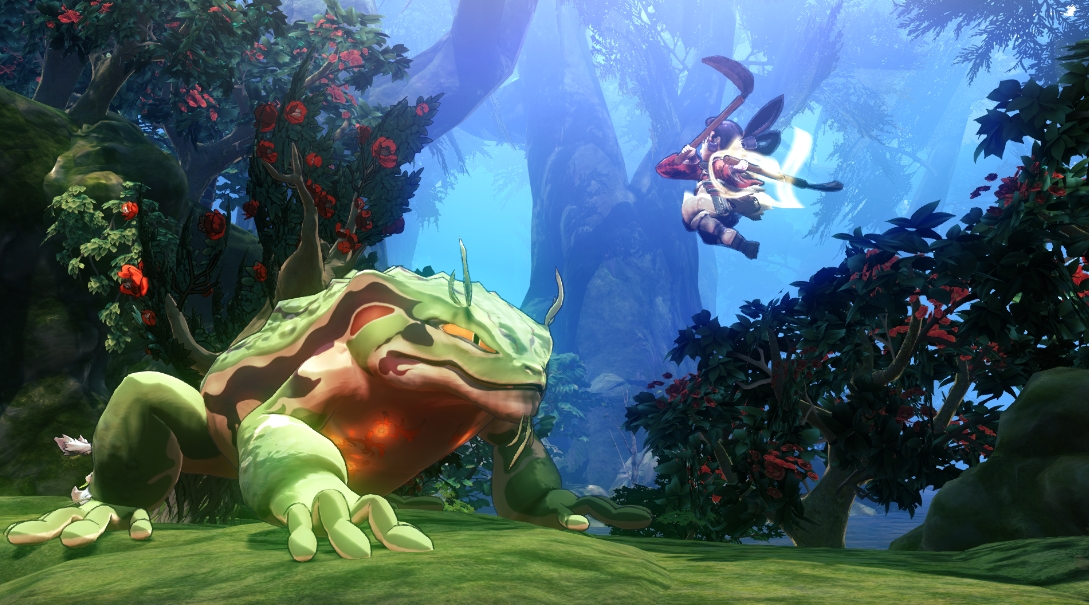 Once you reach the island, you’ll quickly be introduced to the rest of the gameplay mechanics, and, as you can already imagine from the game’s name and the intro above, this game is a side-scrolling action-adventure game with RPG elements, mixed with a farming simulator in which you’ll have to take care of rice crops to sate your hunger and survive the harsh environment.

As for the different areas you’ll explore and the demons I had to get rid of, I liked how there’s a regular (one-handed) and a stronger attack (two-handed), which each equipped with a different weapon. Each weapon has a characteristic (slash, strike), and the demons also have resistances and weaknesses to these parameters. That’s not all, since Sakuna also has a raiment (kind of a magical scarf) as a weapon, and it can also be used to grapple, so depending on how it’s used, you’ll be dealing with quite a lot of depth in battle! 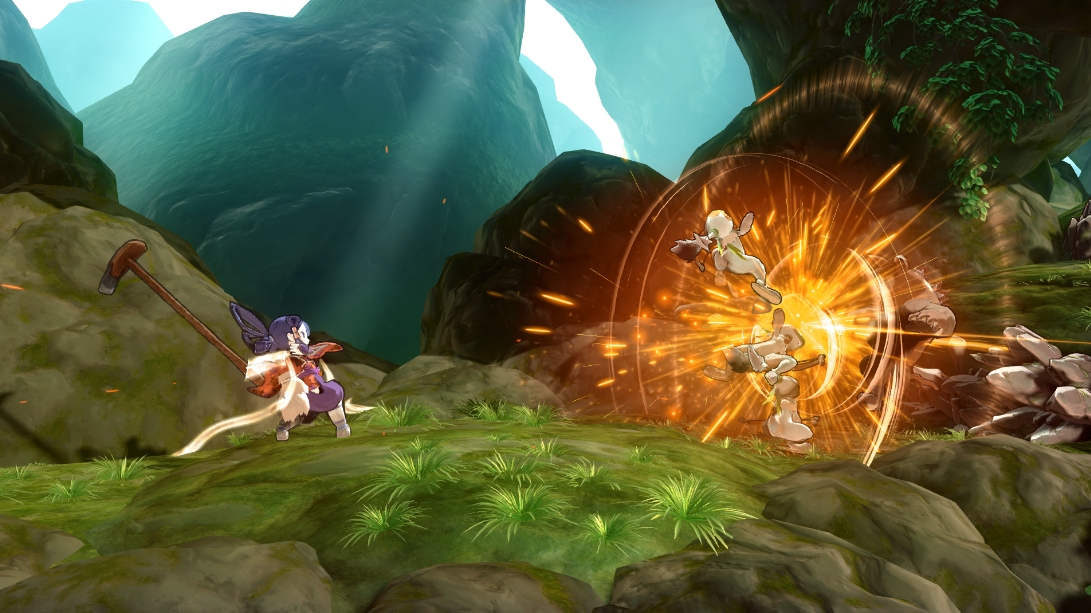 The different levels are quite easy to experience during an in-game day – even though time advances quite quickly. But in some of them, you might not have enough time to complete them in a single go, and when the night falls, the enemies become increasingly harder and more aggressive. You might lose all your HP in the field, and there aren’t many consequences as you’ll just be reset to the beginning of the level. The bosses, however, are a real testament to your strength and abilities, and I thought that even on the Easy difficulty setting, they were quite challenging! It isn’t mentioned in the game, but if you want a real chance to win, you must learn how to evade attacks, which is done by pressing twice on the D-Pad in the direction the attack is coming from. I would have liked this to be mapped to one of the shoulder buttons for easier access.

Sakuna has light RPG elements, but you won’t be leveling up directly by fighting monsters. Her progress is more story-oriented. Each of her equipment pieces has dormant powers that have different conditions to unlock – such as get rid of X of a specific type of enemy. When the condition is met, you can unleash its permanent power and give a stats boost to Sakuna. 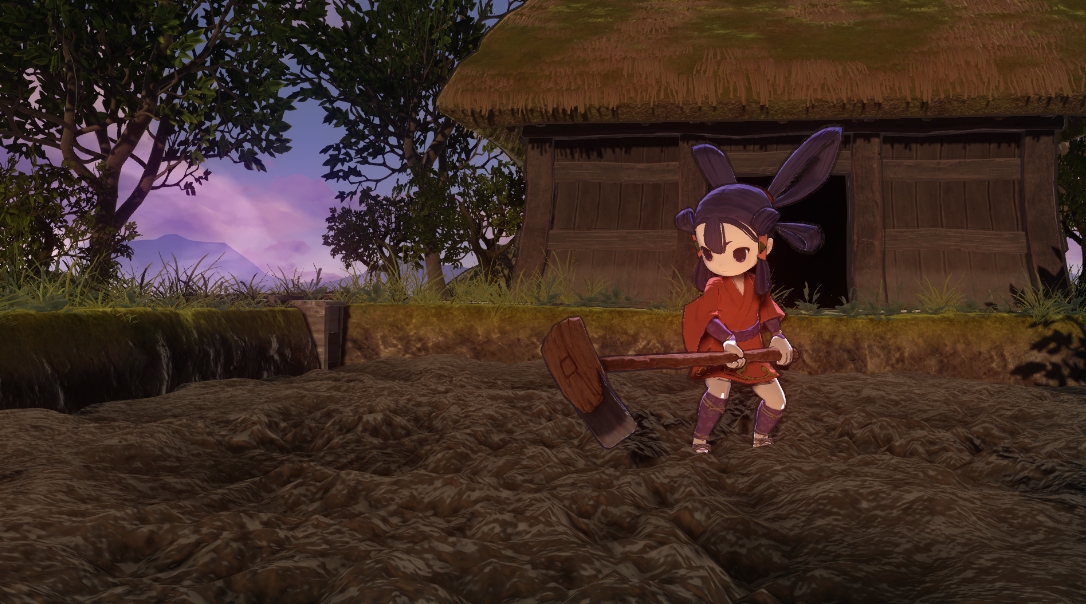 There’s also a hunger stat that you must be aware of. Being stranded on an island, Sakuna and her crew must eat every day by using the ingredients found while exploring. Each evening, a menu will be cooked, giving buffs for the following day. These buffs are only active as long as her hunger level isn’t critical, so this will prevent you from exploring endlessly and touch base at home every evening.

The second part of this game is agriculture. As per the game’s title, you’ll be cultivating rice, and you’ll soon realize how this is a big part of the whole experience! Growing rice in Sakuna is very technical, and in the end, you’ll understand how real-life rice cultivation works. It goes from preparing the soil in spring, adding fertilizer, to planting the seeds. Then, as the season changes to summer, you’ll be taking care of the plants, then when it’s harvest time in the Fall, you’ll cut and dry them, extract the grain, then finally crushing it to go from brown to white rice. Each season in Sakuna is separated into three days per season, with the whole sequence taking 12 in-game days, which one would equate to the months in our calendar.

I enjoyed how technical rice growing is, and I liked the actual gameplay, but one thing I honestly had a hard time with this game is that I felt it lacked additional explanations and tutorials on some elements. For instance, you’ll be collecting green gems as you progress through the levels, and I was really puzzled about his use. You will get to learn what you can do with them around the four-hour mark. New levels also won’t open by themselves automatically, and it isn’t explained how to progress directly. I had to figure out that in order to progress to the new levels, I had to go back to previous ones and complete some challenges there. These complaints are not a deal-breaker, but they’re something I do have to mention. 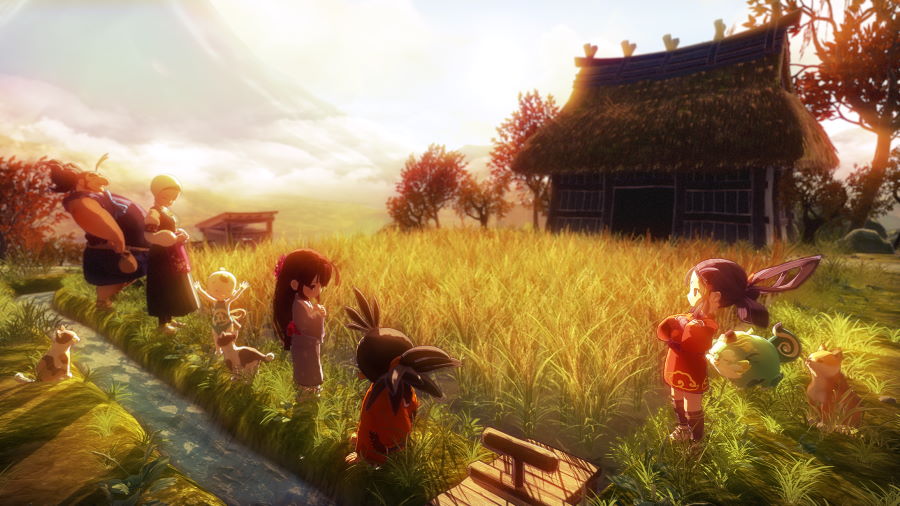 As for the game’s presentation, it is amazing. The environments are lush and even change as you move through the different seasons. The models look great as well, and the game runs at a steady 60 frames per second. The voice acting is also great, and dual audio – with English and Japanese audio tracks – is also included. The world map is also downright huge, and it was fun to explore the different locations. The trophies are awarded for progressing through the story, achieving in-game combos, and growing your rice, so there’s a great variety of trophies to work on.

Sakuna: Of Rice and Ruin is a fantastic game that does something quite unthinkable: merge an action-adventure game with a rice cultivating simulator while keeping the experience interesting and engaging. I loved progressing through the levels and enhancing my crops through the years. The presentation is fantastic, and I loved how the gameplay used different fighting styles during the action segments. I did mention that I thought that the adventure progression was harsh, given that the game lacks an explanation on some of the core gameplay elements, and that the bosses are very challenging, even on easy. But even with those complaints, Sakuna: Of Rice and Ruin is one of the best games I played this year on PlayStation 4. 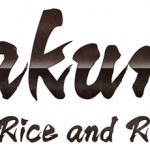 Sakuna: Of Rice and Ruin Review

Disclaimer
This Sakuna: Of Rice and Ruin review is based on a PlayStation 4 code provided by XSEED Games.

[Beyond PlayStation] Ministry of Broadcast Review