Mad Rat Dead from NIS America is a colorful and fun 2D rhythm-based platformer that’s a blast to play on PS4. Find out why in our Mad Rat Dead review!


Mad Rat Dead from NIS America is a colorful and fun 2D rhythm-based platformer that will challenge your skills and reaction time. Once you’ve entered your name, you’ll be ready to take on this rhythm adventure… that is after someone with a pair of surgical gloves, tweezers, and a scalpel… cuts you open! As you watch your character being opened up, with all organs exposed, you’ll be answering a series of questions. Because. Because reasons. You’re very much dead but are given a second chance at life after serving as a lab rat. Who grants you this magnificent gift? The Rat God, of course! You will get to relive your last day as you take on an adventure to fulfill your last wish: to kill the human who kept you trapped in a cage and then opened you up!

Something I do have to bring up before I go any further is that the game’s soundtrack is awesome, which is good news for a rhythm-based release! It’s jazzy, funky, and packs a punch, always driving you onward. And then it takes a turn into more of an electronic territory with a dash of hip-hop, to later mix things up again with a lot of memorable tunes. The music in Mad Rat Dead will do a great job of keeping you moving forward, as you avoid bottomless pits and poisonous water, wall jumping to safety, only to have to dash out of the way before a spiky creature or a huge flame with eyes falls on top of you. 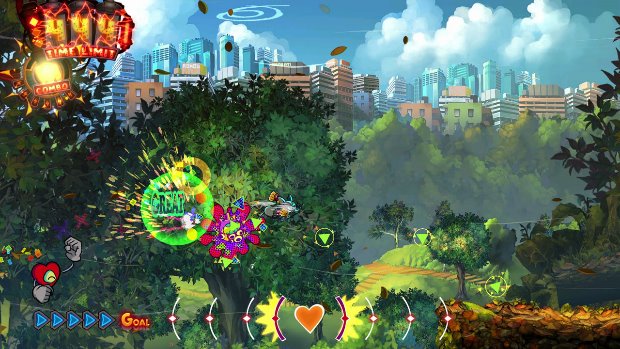 Mad Rat Dead is a rhythm-based 2D platforming game, which means that your interaction with this particular release will be all about the face buttons. As you walk and aim your direction with the left analog stick or the D-Pad, you can use the X button for jumping, with the Circle button allowing your rat to do a dash. You can drop down by pressing the Square button and can charge up your energy with the Triangle button. All of this has to be done in time with the beat, so you’ll need to pay attention to the heart at the bottom of the screen so that you can get a feel for what the right rhythm will be.

When you die, which will probably happen quite often at the start of your journey as you get used to things, you’ll be able to press left on the left analog stick or the D-Pad so that you can rewind back time a bit snd give it another go. Fell down a bottomless pit? Then rewind time so that you can change your plan and better time that tricky jump. Got too close to a nightmare, and it killed you good? Rewind time so that you can properly target it and kill it with a spin jump or with the power of a power stomp.


You will always need to be on the move, planning a couple of moves ahead so that you can keep your combo going. Timing is a must if you want to S+ rank each of the stages that Mad Rat Dead has to offer. You’ll be graded based on the amount of time you have left when you cross the goal, the number of Great, Early, Late, and Missed beats you had, as well as your max combo for that particular level. Getting an S+ rank will at first be a bit tricky since you’ll first need to play a stage to be able yo know what you’ll be going up against – a level’s layout, enemy placement, how many pickups you can get to increase the overall time left for that stage. 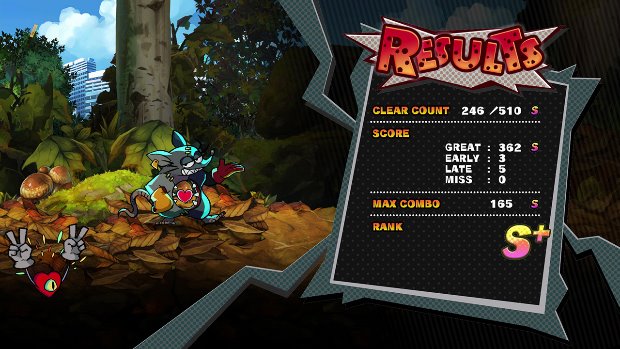 After each set of stages, you will get to take on a boss fight that will shake things up for a bit. You will still need to move around along to the beat, but you will also need to pay attention to your opponent’s movement and attack patterns so that you can find the right window opportunity to attack them as you try to stay alive long enough to be victorious before time runs out. For example, and as to not spoil things, your first boss battle will be up against a group of fellow rats that have mutated into specimens with enlarged brains that explode every now and then. If they touch you, you’re dead, so you’ll have to run, dash, jump and drip as needed so that you can wait for their brain to explode, thus allowing you to defeat them with a spin attack or a power drop.


Trophy hunters need to know that this will not be an easy stroll! A big chunk of the game’s trophy list will ask that you clear each of the stages in Mad Rat Dead with an S+ ranking, and you’ll then have to do it all over again in the Hard difficulty setting! On top of this, there are trophies for getting a game over, for getting a 50, 150, and 300 combo count, for dying more than ten times in a stage, for using a charged dash or charged jump in a stage, for clearing a stage with nothing but Great moves, for clearing a stage without dying, and for clearing the game’s story, to name some examples. 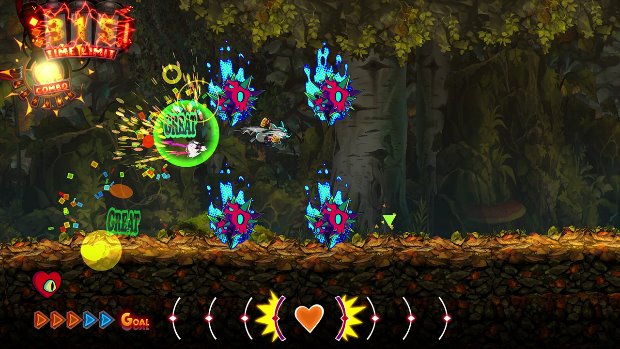 If you’re not a fan of rhythm games, then you should obviously avoid Mad Rat Dead. If you have no rhythm whatsoever, you should stay far away from this one. If you’re not looking forward to pressing the Circle, X, Square, and Triangle buttons hundreds of times for each stage, then stay away from this one. But if you’re a fan of rhythm games looking for a great looking and fun game on PS4 with a superb soundtrack, then this is a must-buy. Mad Rat Dead is out now on PlayStation 4 with a $39.99 asking price.

Disclaimer
This Mad Rat Dead review is based on a PlayStation 4 copy provided by NIS America.