Lunch A Palooza is a local party game in which you are food items and must attack the other players to claim victory. Check out our Lunch A Palooza review!


Lunch A Palooza is a fast-paced multiplayer party game, the goal is to be the last food standing. You must use special “attacks” to push other meals off the table, using food-related items, whilst dodging endemic enemies, as well as making use of power-ups, and utilizing traps to foil opponents.

As soon as you boot the game, you’ll be greeted with a selection of one of four different game modes. You’ll then be asked to select your playable food items. You won’t have many choices at first, but more will unlock as you play, with up to eight different choices. I liked how each playable character has its own attack patterns, so they’re each quite unique. You can add AI opponents up to have up to four local players at once. 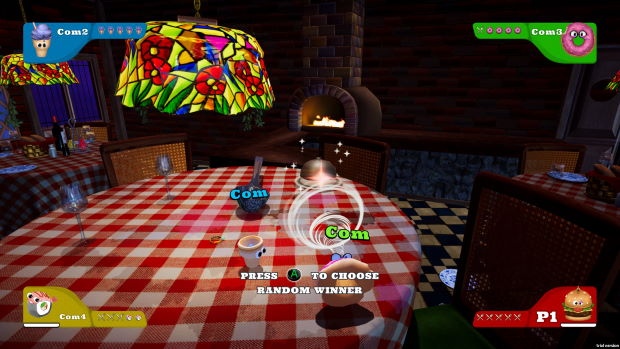 The first game mode is called Main Course. In this mode, your goal is to knock all players out of the table in a Free-For-All fashion. You can attack the other players directly using a standard or charged attack or strike them with objects found on the table. Depending on the level selected, there are also hazards that will pop up over the course of each game to spice up the experience. Each player has five lives, and a match lasts anything from a few seconds up to a few minutes.

The second game mode is Side Dish and is basically the same as the Main Course mode but in Teams instead of being in a Free-For-All manner. The next mode is King of the Cloche, in which the objective is to control the desert cloche. This is a King of the Hill game mode in which the player standing on the objective will earn points as long as it’s the only one there. Be the first to reach the point objective to win!


The last mode is the Royal Buffet, which is exactly like the Main Course mode, but with the added challenge of having the player character change to another food item when he loses a life. This mode can prevent players from getting too good with a single food item.

As for the playable character themselves, as I mentioned above, there is some variety, but I thought that the character roster was a bit on the shallow side of things, given that there aren’t many even when the whole cast is fully unlocked. There’s a hamburger that can stomp other players and a corn cob that can pop corn and make an AOE attack around him. There’s a meatball that can sprint towards other players and jello that at first feels overpowered compared to the other characters, thanks to its special attack.

The levels themselves are carefully designed, and I liked how each of them was unique and alive with everything that is happening during each battle. I do, however, have the same complaint about the levels as I did for the character: I felt like there were too few of them. After playing in all of them, I thought that the first one in an Italian buffet was the most fun, followed by the one that is set in a mansion.

As for the presentation, the game looks nice, and the different selectable characters are comically designed. As is the case with many PlayStation 4 games late in the console cycle, the system fan goes into overdrive as soon as the game starts, which is distracting but understandable. This one is a local-multiplayer only release, which, as expected, means that online play isn’t supported.

As for the trophies, they are awarded for playing the game, and a few should come naturally. For instance, you’ll get six trophies for every 10 minutes spent in the game, up to playing for a full hour. There are also some harder to accomplish feats that will require a friend to help you in order to complete the requirements, but nothing feels too hard.

Lunch A Palooza is an okay party game, but one I thought lacked the content needed to keep players for longer. Once the novelty passed and I’d had unlocked everything the game has to offer, my interest quickly faded. Having only a few playable characters and levels is acceptable, but I thought that this game would have benefited from having more game modes, as well as for the game modes that are more different, instead of only adding some variations to the main game mode.

Disclaimer
This Lunch A Palooza review is based on a PlayStation 4 code provided by Seashell Studio.