GORSD from Springloaded is an arcade-style game with an interesting look and premise on PlayStation 4. Learn more in our GORSD review! 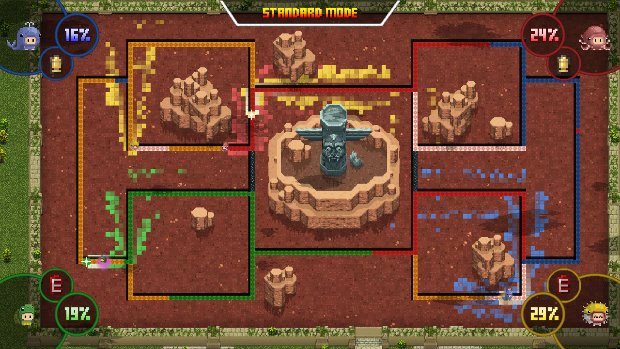 GORSD from Springloaded is quite the conundrum. What the game breaks down to is a territory control shooter with an arcade-style twist: you only have one bullet. You can catch your bullet, and you can curve your bullet. There is a dearth of modes available here, playable in the single-player campaign and the multiplayer modes. This one takes queues from games like Splatoon, Nidhogg, and the old-school classic Qix. You spend the majority of this game navigating 2D mazes, either in combat with enemies or while completing puzzle segments.

The inspiration of Splatoon is obvious through the area-domination gameplay modes since you are attempting to paint the floor in your color. Whether that’s capturing the whole map, using captured areas to score points, or playing in Hunter Mode, where each player has one life to capture a larger area than their opponent while their opponent hunts them. There is a lot of game here. Couch multiplayer is where this game becomes utter hilarious, ala Nidhogg. Add your friends to the mix, each with a single bullet, the absurd controls coupled with bizarre game modes, and let chaos reign! 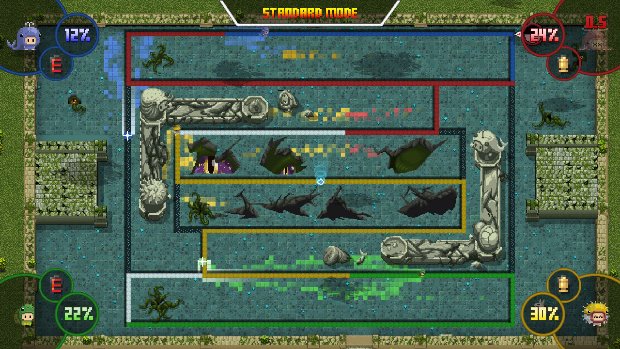 GORSD is frustratingly beautiful in the way it plays. Bullet curving will break your brain. You use the right stick to fire your bullet. You can direct your bullet around corners by flicking the right stick in the correct direction. It is so easy to make mistakes with this. Since you independently have to manage the movement of your character and your bullet, you will die… a lot. I am convinced that the human brain is not advanced enough to process the independent movement of your character in GORSD and the bullet you fire off into these mazes. There’s simply too much to think about at a given time that I had a hard time keeping up with everything I was trying to do. 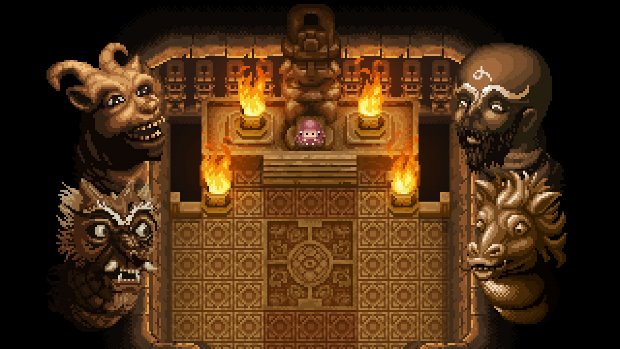 The more times you die during a match, the longer it takes for your character to respawn. The more kills you score, the bigger of an area that will be impacted when you kill an enemy with your bullet. All of this adds to a brutally challenging single-player campaign and sets the ground for a ton of hectic multiplayer fun. Thankfully the game will offer you an easy mode if you just can’t get through some of the challenges it throws at you. Half of me wanted to smash my controller into a thousand pieces. The other half wanted to give it a try just one more time. I love the hook of this game, but I hate myself for continually putting myself through this suffering.


This is one of the most bizarre games I have ever played. There are disturbing faces attached to worm-like dragon bodies. The faces also greet you throughout your experience with non-sensical statements. It’s almost as if the designers and writers were trying to make this experience into a meme. I can’t tell you, to be honest. There are talks of mutations, things inside you, tentacle-worm things, and more. GORSD is creepy. It put me in a state of unease, which seems entirely intentional. This game commits fully to its bizarre aesthetic, and I appreciate it for that reason. 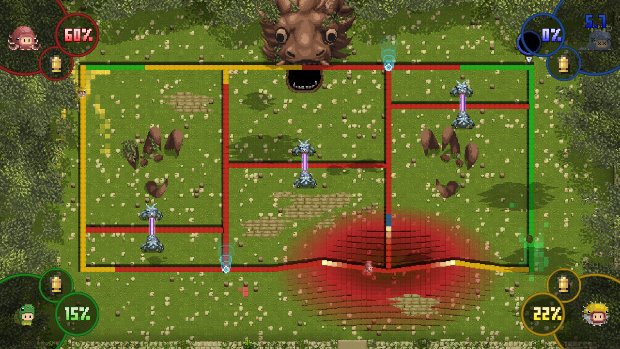 The music in GORSD is really good as well. It’s got a retro sci-fi feel to it, which perfectly fits this game. It knows you’re going to die… a lot, so the ease of restarting a level with a different musical accompaniment to join you as you die over and over… and over again, is certainly a nice touch. Too often do games rely on a single track to do all the heavy lifting, whereas GORSD is varied enough that I didn’t tire of the synth vibes. Thankfully, for a game where you die this often, there are few noticeable loading times after the game initially boots up.


I have a love/hate relationship with this game. When it all clicks, I feel like a god. When it doesn’t, I want to uninstall GORSD and never think about it again. If you’re a glutton for punishment, you’ll find that by the bucketful in GORSD. It’s a game you need to see to believe, and it might be exactly what you’re looking for on PlayStation 4.

Disclaimer
This GORSD review is based on a PlayStatiopn 4 copy provided by Springloaded.