StarCrossed from Contigo Games and Whitethorn Digital is an arcade-style game with a magical girl aesthetic in which you’re out to save the Nova galaxy. Learn more in our StarCrossed review!


StarCrossed from Contigo Games and Whitethorn Digital is an arcade-style game with a magical girl aesthetic in which you’ll join a group of five space-faring heroes traveling in space as they work together to save the Nova galaxy. Contigo Games took this project to Kickstarter back in September 2018, with a modest goal of only $10,000. Once the campaign was over, and thanks to the support of more than 300 backers, the project managed to get a little over $12,000 in funding, and it’s now made its way to the Nintendo Switch. You can take on this one in the Arcade Mode, which features an endless wave of enemies to defeat or jump into the Story Mode, which does a good job at presenting to us a cheesy but fun experience. 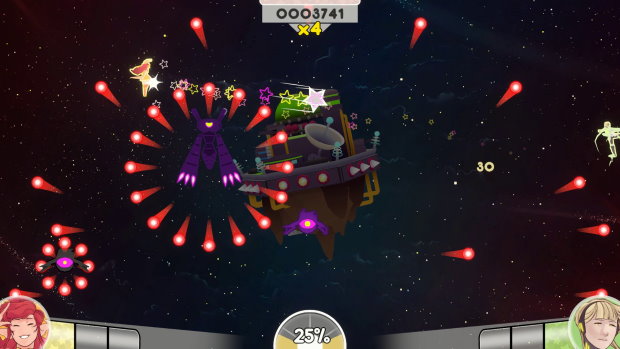 The game takes place in the Nova Galaxy, a place brought together by the power of the Harmony Crystal. During times of crisis, the Harmony Crystal has anointed five heroes to defend it at all costs. As it turns out, during your time with StarCrossed, you will experience such a crisis, which is why you’ll be taking on an adventure with five distinct characters by your side. The crisis at hand? The Harmony Crystal has been stolen during the celebration festival at the Serenity Satellite, and it’s up to you to recover it before it’s too late!


While you can play the game on your own, this one is certainly tailored for some local co-op multiplayer mayhem. The premise is easy to understand: your attacks are tied to the star that bounces between the two characters that are selected for this journey through space. As the two characters fly around the screen, the star must be kept in play as it bounces back and forth, with characters dashing to avoid enemy attacks, as you try to Starboost by pressing a button at the right time to give the star an extra boost in speed while also building up your Sync level. Once the Sync level is high enough, you’ll get to unleash an Ultimate attack for some considerable damage.


When playing StarCrossed by yourself, you’ll be controlling both characters with the left and right analog sticks on your Nintendo Switch Joy-con – or Nintendo Switch Pro Controller – which will require you to focus on the action on the entire screen at all times. This does make for a bit of a “rub your belly and tap your head” initial feeling for the whole setup, but with a bit of practice, you’ll be able to get the hang of things. As for the characters you will be controlling, they will include the Idol, the Hero, the Princess, the Outlaw, and the Weapon. 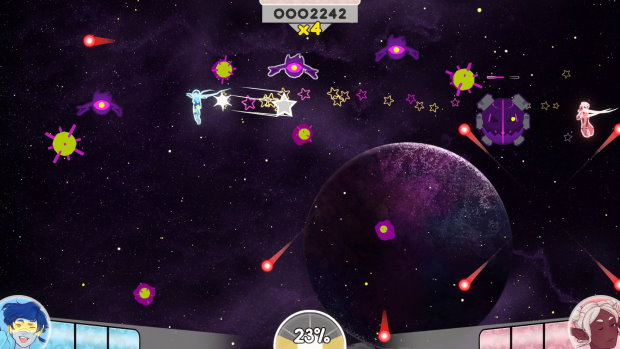 Idol is an intergalactic pop star, and she’s bubbly and optimistic due to her overall sheltered life. Hero is the go-getter of the bunch, who is always ready for action, even when things are tough. Princess is the sworn protector of the Harmony Crystal and the benevolent overseer of the Nova Galaxy. Outlaw is a bit laidback and fearless but is a powerful ally to have on your side – so far, no one in the seven corners of the Nova Galaxy has been able to beat her in arm wrestling! The last member is Weapon, who was actually developed by a mad scientist in an effort to steal the Harmony Crystal. Can you really trust Weapon?


As you progress through StarCrossed, you’ll run into a nice variety of enemies. You will meet the ones that remain stationary, shooting bullets at you, the ones that look like crows that will quickly fly towards you, a big set of chompers that will try to take a bit if you come too close, enemies that sport shields that can make your star attack bounce back, floating stars that will move all over the screen at a steady pace, larger mini-boss like spheres of death that will have a lot of hit points and can pack a punch, or giant worms that spell trouble, to name some examples. 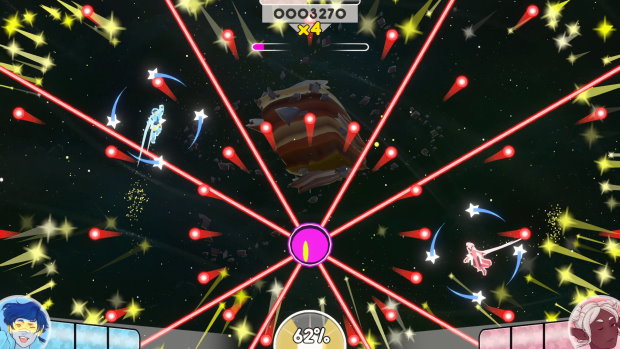 And then there are the bosses you’ll be fighting against, which will dial up the difficulty considerably. During boss battles, StarCrossed changes things a bit, going straight into bullet hell territory. During the fights, you’ll have to pay attention to a boss’ movement and attack pattern so that you can find the right window of opportunity to deal damage with your star attack – or unleash an ultimate attack to maximize your damage output – and when it’s best to focus on avoiding and dodging the many attacks coming your way. The good news is that if you fall in battle, you’ll get to retry to continue right where you left. 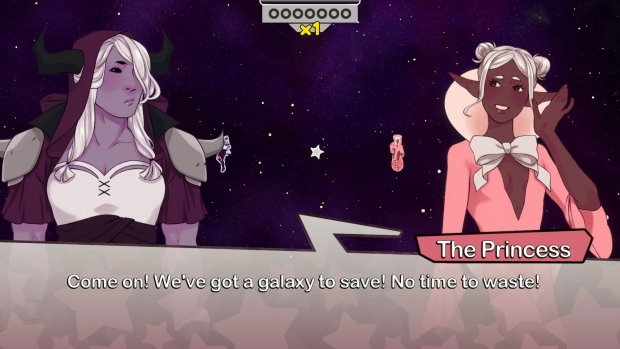 StarCrossed is a colorful, action-packed adventure that shines on Nintendo Switch. It has easy to understand gameplay mechanics, great graphics, and a steady difficulty curve – that considerably jumps up during boss fights – that is perfect for some local co-op multiplayer fun. While you can indeed play this one on your own, having to control both characters at once can feel a bit overwhelming in later parts of the game. StarCrossed is out now on Nintendo Switch for a $9.99 asking price. 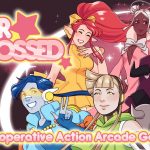 Disclaimer
This StarCrossed review is based on a Nintendo Switch copy provided by Whitethorn Digital.

Vera Blanc: Full Moon Out On PS4 And Nintendo Switch