[Beyond PlayStation] Oceanhorn 2: Knights of the Lost Real Review


Oceanhorn 2: Knights of the Lost Realm from indie team Cornfox & Bros. will have you taking on the role of a nameless hero who does not speak, who will embark on a quest through the kingdom of Arcadia, a charming land that hides many secrets. During the initial story cutscene, you will see how a baby is presented to one Master Mayfair for protection. It turns out this baby is our hero, and Master Mayfair has raised him as if he were his own. Your journey begins many years later, as you set foot on an island where you must retrieve a lockbox that was stolen by pirates a while ago. 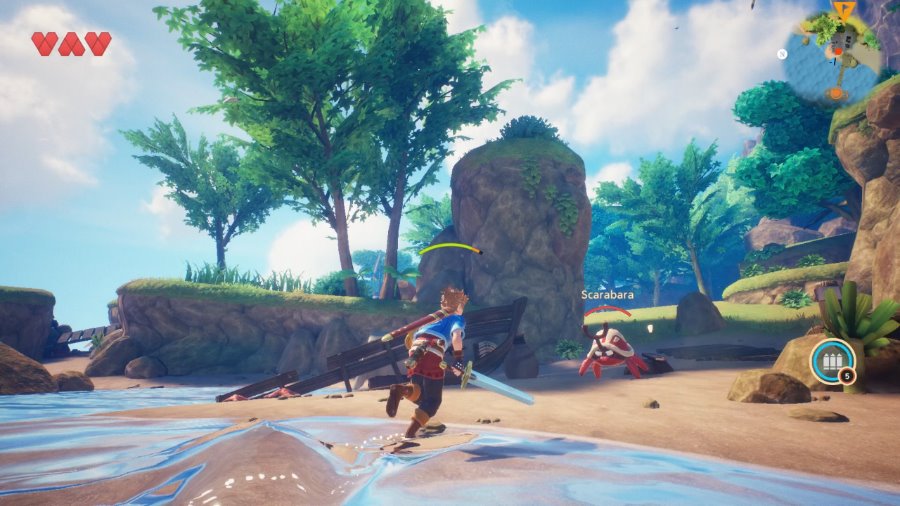 While Oceanhorn: Monster of Uncharted Seas paid homage to the old-school The Legend of Zelda: A Link to the Past on the Super Nintendo Entertainment System, Oceanhorn 2: Knights of the Lost Realm takes things into 3D The Legend of Zelda: Skyward Sword territory by way of the Breath of the Wild color palette, giving us a more robust experience on Nintendo’s console that does a good job of paying homage to the source material while also being able to stand on its own. After first releasing on Apple Arcade, Oceanhorn 2 is ready to shine on Nintendo’s console.

You won’t be taking on this quest on your own. Along with the aid of Master Mayfair, you will be joined by Trin, the granddaughter of Arcadia’s leader Archimedes, as well as by Gen, a mysterious robot who wields a samurai sword and is ready for action. They will fight by your side, as well as help you to solve some of the puzzles in Oceanhorn 2: Knights of the Lost Realm. You’ll be able to direct them to stand on switches to open up doors or to rush into battle so that you’re not outnumbered.


Since it’s an adventure that pays homage to the 3D The Legend of Zelda releases, you’ll move your hero with the left analog stick, swinging the camera around as needed with the right one. You can also spring by pressing in on the left analog stick, but you will need to pay attention to your Stamina when doing this so that you don’t run out of it at the worst of times. Your main attack is mapped to the Y button, which you can use to swing your sword. You can roll to avoid danger by pressing the B button, and yes, there is no jump button, so your hero will automatically jump on top of small obstacles or over short gaps. 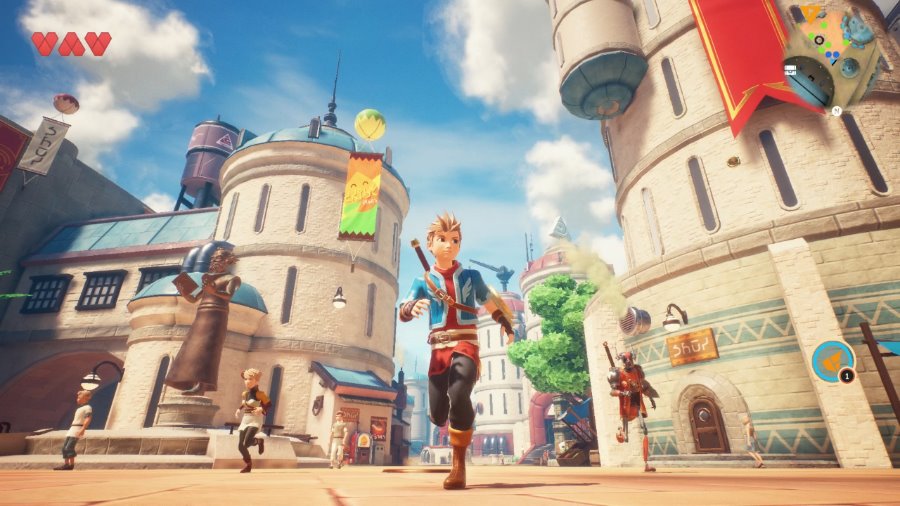 You will have access to a variety of items and tools during this 3D action-adventure, as well as elemental attacks that can be used thanks to the Caster Gun you’ll pick up early in your quest. You can access all of these with the radial menu, which can be opened with the R button. To pull out your Caster Gun, you can press the ZL button to aim before you shoot with the ZR button so that you can attack the many enemies you’ll face or use the power of the elements to solve the puzzles you will find.

When you press the + button, you’ll go into the adventure menu. Here you can review the Gear you have found so far, which you can later boost and modify with the power shards you’ll collect. At first, you’ll only have your trusty sword and the Caster Gun at your disposal, with the only options to upgrade being the gun’s ammo projectiles, as well as your healing spell, which can aid you when you find yourself greatly injured. You will also notice a health upgrade heart on the right side of the screen. Collect three heart pieces, and you’ll gain an extra health unit – a change from the usual “collect four” heart container we’ve seen in The Legend of Zelda.


Going back to that healing spell I mentioned above, when you find items that can help you heal your wounds – things such as herbs, apples, healing aloe, or maybe a tasty blood orange, they will first be used to heal your current wounds. After this, once you’re at full health, all of the additional resources will go towards charging up your healing spell so that you can heal a heart or two when needed. Because of this, you should always inspect any shiny spots with the A button so that you can collect all available resources during your journey. 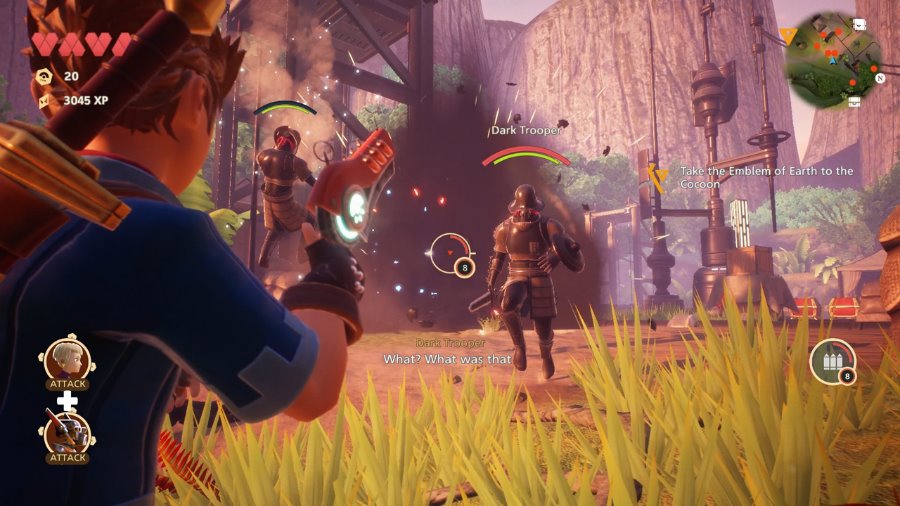 There is also a Quest tab in which you can review the Adventure Log to review the different messages you’ve gotten to read during your adventure, check the quest items you’ve collected, the magical emblems you’ve obtained, as well as any of the keys you’ve found. There’s also a Challenges tab, in which you can be rewarded for completing a variety of objectives for some bonus experience points for your hero. These can include simple things such as performing a roll for the first time, sprinting, finding a Bloodstone, or sailing into the vast ocean. There are 80 challenges in total, so there’s definitely a lot to do in this one if you want to 100% it!

As you complete Challenges and defeat enemies, you will be rewarded with experience points and coins. Coins can also be obtained by opening treasure chests and collecting things such as pearl necklaces, which will be automatically converted to coins – for your convenience. As for experience points, they will be used to allow your hero to rank up once he collects enough of them to level up. When this happens, you’ll recover all of your health and receive a nice bonus of extra coins. Level up enough, and you will also receive bonuses such as being able to carry more ammo!


The Pirate Hideout at the start of the game will serve as the tutorial for Oceanhorn 2. In here, you’ll meet new enemies, learn about activating blue switches, gain access to a shield you can use to protect yourself, as well as to push items such as large rocks out of the way, pick up, aim, and throw the now classic pots and barrels, solve some light puzzles – such as how red buttons need to be pressed with an object so that they remain pressed -, finding keys to open doors, using fire to light up barrels so that you can then throw them to burn down wooden barriers, as well as fighting a boss. 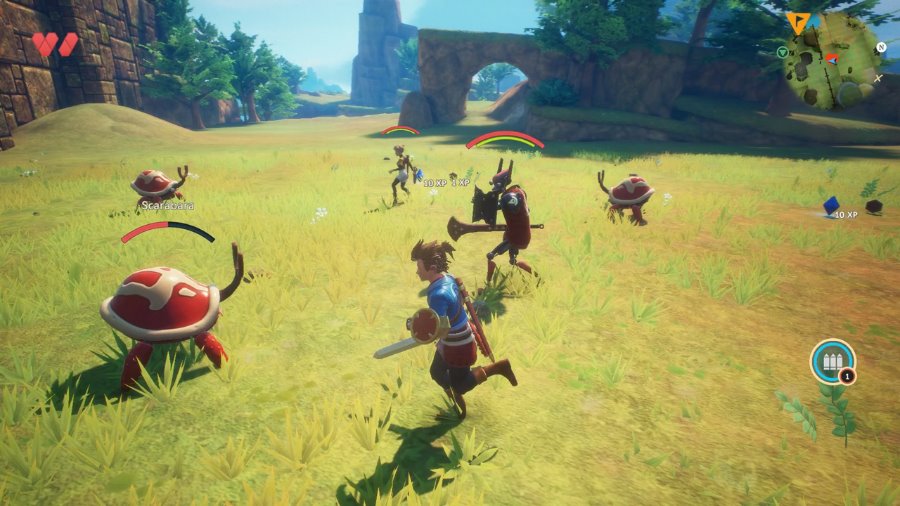 I had fun playing Oceanhorn: Monster of Uncharted Seas back when I reviewed it on PlayStation 4, so I was definitely up for giving its sequel a spin on Nintendo Switch. A short adventure this is not, since you’re looking at spending dozens of hours playing Oceanhorn 2: Knights of the Lost Realm before you’ve managed to see everything that the game has to offer. It presents a robust adventure, solid gameplay mechanics – minus the lack of a lock-on option during battle -, gorgeous graphics that rarely take a dip in framerate, all for a $29.99 asking price on Nintendo Switch, so I definitely recommend that you take this one for a spin!

Disclaimer
This Oceanhorn 2: Knights of the Lost Realm review is based on a Nintendo Switch copy provided by Cornfox & Bros.

Where the Heart Is Out Next Month