[Beyond PlayStation] Ministry of Broadcast Review


In 2D indie narrative-driven platformer Ministry of Broadcast from Ministry of Broadcast Studios and Hitcents – which has a bit of an Out of this World vibe to it -, you will be taking part in a bizarre contest that is broadcast for all to see. Think reality TV meets Orwell’s 1984, and you’re pretty close to what you’re about to experience! A wall divides the country, and if you want to be able to cross it and reach your family, you must do whatever it takes to win this contest that is being broadcast by the Regime. 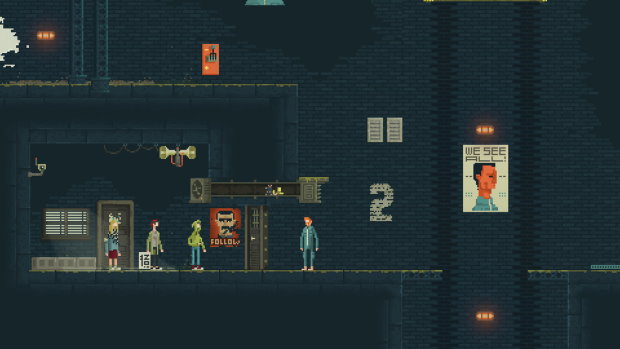 After a short intro sequence, you’ll gain control of your character with the left analog stick or the D-Pad, running by pressing and holding down the ZL or ZR buttons. You can interact with objects with the Y button. This will be put to good use during the intro sequence when you move your character away from the chair it was sitting on so that you can press the Y button to open the door that will lead you to a new adventure. The Y button can also be used to skip the text if you want to speed things up – something I don’t advise during your first run with Ministry of Broadcast. You can also jump with the B button, either directly upwards or by coming to a jump over a gap when pressing left or right on the left analog stick or the D-Pad. Do be aware that these jumps are of the old-school Prince of Persia variety, which means that once you jump, you won’t be able to alter your direction.

Once you find your room, you’ll finally get to sleep for a bit before the first trial. Unfortunately, when you wake up, you realize that your boots are missing. That’s weird, right? Even weirder is that you are called into action over the sound system and that wearing shoes is optional. This leads me to wonder why finding pairs of shoes will be one of the extra activities you can keep in mind when playing Ministry of Broadcast. Not having shoes and having to walk in the snow is one thing, but having to run over a frozen body of water barefoot certainly classifies as abuse. 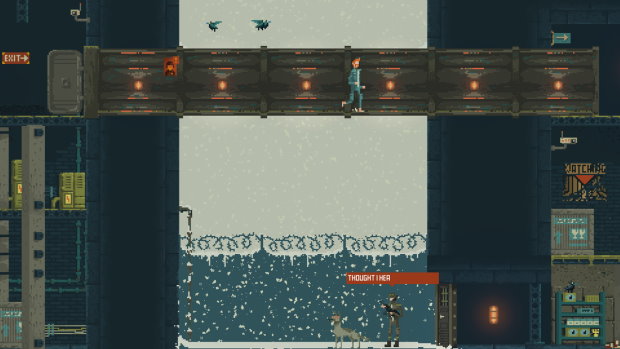 You must participate in these bizarre games, which will test your abilities, patience, and mental well-being every step of the way. First, you must do this in the freezing cold with no boots. Then, after you flip an orange switch to open a door, you’ll see how, after hearing some noise in a tunnel above, a soldier on the ground just fires away at the rats to kill them. You can probably understand how “soldier hears a noise, shoots” is going to play in Ministry of Broadcast as soon as you try to cross the tunnel, right?


Participants must be very careful about what they do since they’re not immortal. Jumped from too high and fell hard on the ground? Then your knees are going to feel that, big time, and they’ll split as you bleed to death. Misjudged a jump and ended falling into the always classic sharp and pointy spikes? Then your time is up, and your noobish broadcasting behavior will force you to press the – button so that you can reload to the last checkpoint, hopefully learning from your mistakes as you give it another shot. 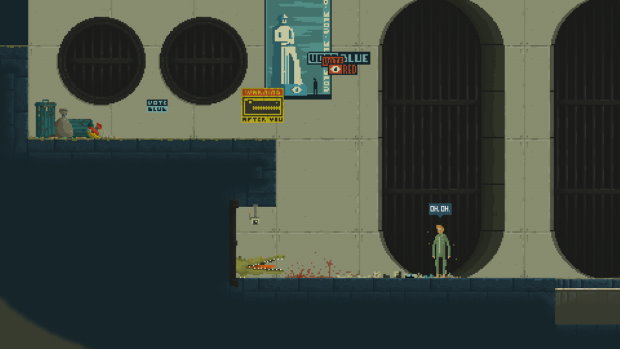 Pressing a switch to open a door is just an example of one of the most basic of puzzles you’ll find, and the game will build upon these with new elements added at a good pace. Take, for example, the second trial. I will talk only about this puzzle sequence, as to not spoil the rest of the game, but it will give you a good idea of what you’ll be going up against. You will find a room with three people and a switch above it. While the switch will open the door, there’s a big gap that said NPCs won’t be able to clear.


So off you go to do some platforming until you find a scaffold you can jump to in order to bring it down with your weight. Doing this will place it over the gap, which means you can now press the switch to open the door as the NPCs are ordered to run along, one at a time. By the time they’ve all done this, you’ll see that they ran too fast… and ended up falling on some very sharp spikes. This is not good for them, but it will allow you to cross over the spikes as you move on towards the third trial! 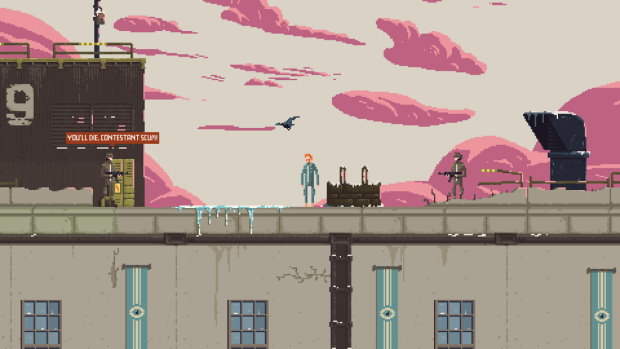 Ministry of Broadcast is a fun 2D platformer with an old-school infused experience in which you’ll unravel a story that delves into some bizarre twists and turns that will keep you going as you try to find out what is really going on. There’s a lot of trial and error involved as you try to find the right solution to each puzzle you run into. Death will only bring you closer to a breakthrough. Ministry of Broadcast is out on Nintendo Switch with a $14.99 asking price.

Disclaimer
This Ministry of Broadcast review is based on a Nintendo Switch copy provide by Hitcents.

How console games are the next natural step for online casinos