Here Be Dragons from Red Zero Games is a board game styled sepia journey that will have you battling against the deadly sea monsters you’ll encounter as you explore uncharted territory. Learn more in our Here Be Dragons review!


In Here Be Dragons from Red Zero Games on Nintendo Switch, you’ll go on a sepia journey through a turn-based strategy board game style game. Instead of working towards setting up trading routes, collecting resources to sell at other ports, and finding new land to add under this or that King, you’ll have to collect ink during your travels so that you can write – or rewrite – the history that you deserve to experience… even if the damn monsters keep getting in the way and try to sink your ship! Mermaids, tritons, leviathans, and krakens are most certainly a thing in Here Be Dragons. 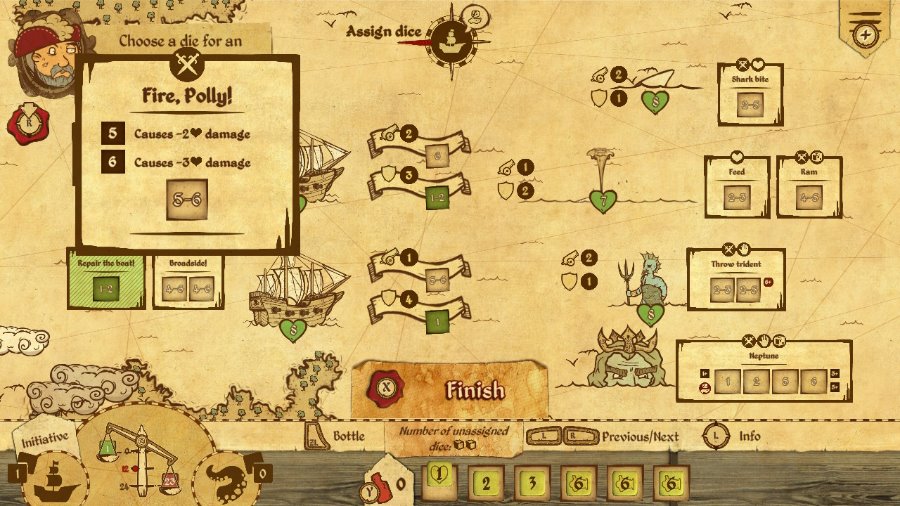 Your journey will begin in the 1490s, and it turns out you’re not really much of a captain, which is why the Court Alchemist has decided to send you on what seems to be a suicide mission. So off you’ll go to explore the world, navigating on the battlefield with the left analog stick as you reveal the map after setting sail, pressing the A button to interact with each mission you’ll take on. Since the battles will take place in a turn-based fashion, you’ll need to pay attention to the different moments of a fight. Oh, and to switch between enemy targets or dice – more on this in a bit – you can use the L and R buttons.


You can use Salvos during the attack and defense segments of the battle. You will deal damage based on your attack stat, which will be lowered based on your opponent’s defense stat. Say you have an attack worth two points, and your enemy has a defense stat of one point. Based on that scenario, you’ll deal one point of damage since your two points will be reduced by your opponent’s single point of defense. This damage will be applied to that enemy’s hit points. If your enemy loses all of its hit points, then it will be defeated. Simple, right? 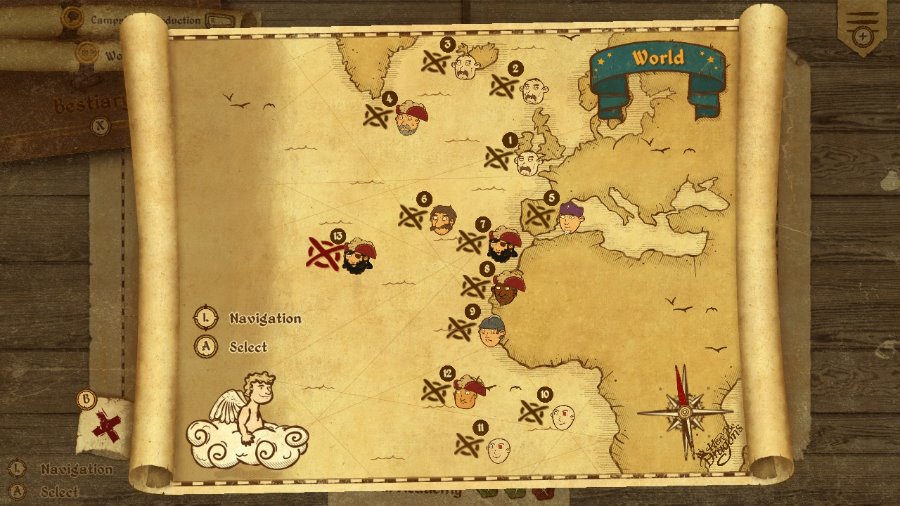 Well, it turns out that before a turn, you must first roll the dice to decide your fate! Once you’ve rolled the dice, their values will be presented in the free pool section at the bottom of the screen. These values can be added to each of the units in a battle to plan Actions. Say you want to assign a die to prepare the Action “Shoot Straight!” This will be set within a range of one to four, and based on the die you add to plan your Action, you will be able to activate this very useful ability, which does not take into consideration the attack and defense values and just goes all-in on dealing direct damage to your enemy’s hit points. Some Actions will require more than one die, so you will need to assign them during different turns, which is part of the strategy side of the equation.

A lucky roll might leave you with a die with a value of six, which, when assigned to your ship, will reward you with an extra point to your attack stat. You will need to make good use of this because the bonus will only last until the end of the turn! Dice must be assigned to Actions by your enemies and yourself, and waste will not be tolerated. If a unit has an Action with a numerical range that can’t be activated with the rolled values, then that unit will lose one hit point… which can prove to be deadly! Dying by the luck of the dice is something that can certainly happen, so you better be careful! 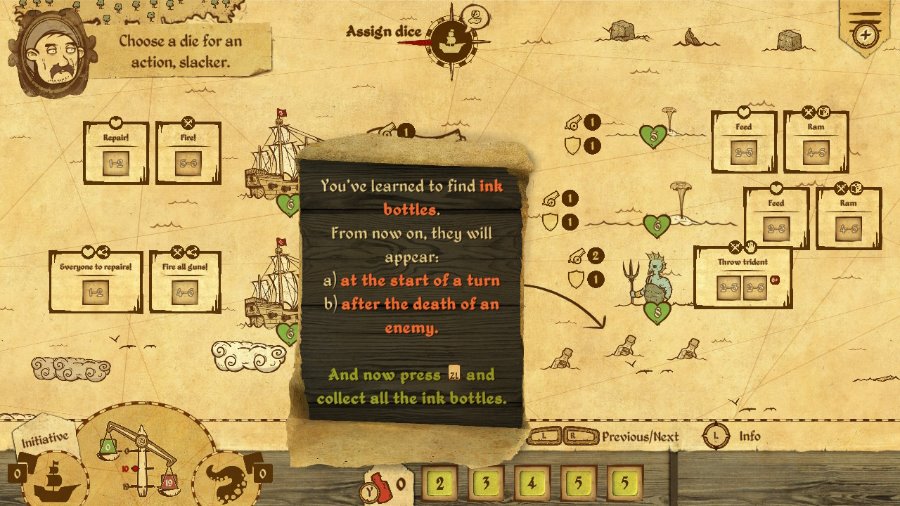 Since all of this means you’d have to be doing constant math between what you’ve assigned and what your opponents have assigned, and how you could push the scale in your favor… the game uses an actual graphic of a scale on the bottom left side of the screen, which will show you what is the sum of your dice value for the left side of the scale, and show the sum of the dice of your enemy on the right side. This will immediately let you know the effect that assigning one die or the other will have over Initiative, just by switching between them with the L and R buttons.

If you haven’t realized it by now, dice will pray a crucial role in battle for both your group and your enemies, which is why I must mention one more thing: stat boosts! Dice values can not only be assigned to the Actions you can perform – with your selection growing as you progress through the game -, they can also be assigned to your attack and defense stats to increase their value! On top of this, the die you assign to attack or defense won’t disappear right away, as is the case for those assigned to actions, which means that you’ll need to plan and see if a die can be best used to increase your attack or defense or to hopefully activate a more powerful Action during your next turn.

When you add the ink, you can collect and spend on rewriting things so that you can, for example, reroll a die, and you have a solid strategy adventure. These are known as Errata, and the further you progress in Here Be Dragons, the more Errata options you will have available to spend your hard-earned ink bottles. You do need to pay attention to the ink cost of each of these Errata because nothing hurts more than making a plan for using one of them only to realize you’re actually one ink bottle short! 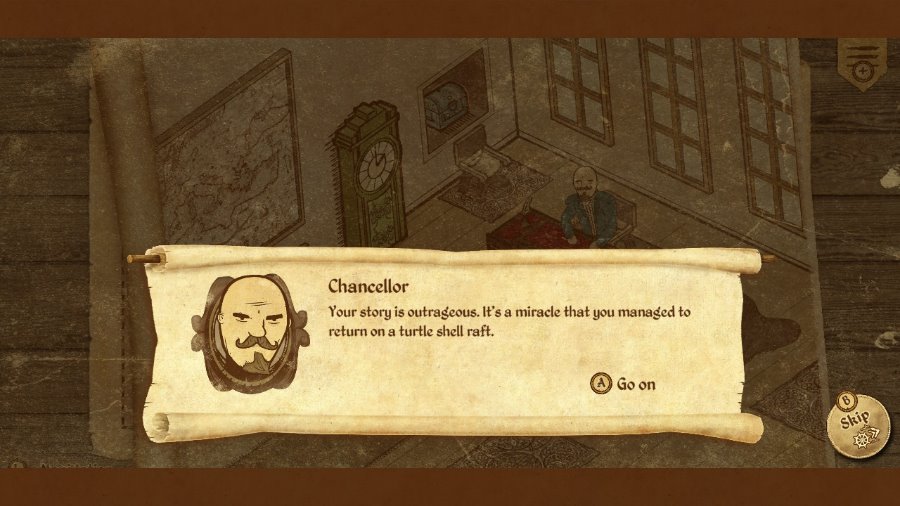 Here Be Dragons might feel a bit slow at the start since it has to show you how to play so that you know what you’ll be running into, but once it gets going, you’ll be having a lot of fun. The turn-based battles are engaging and require your full attention, but even when you’re defeated, you will have learned from your mistakes so that you can give it another go -and hopefully get a lucky roll of the dice to aid you! Here Be Dragons is out now on Nintendo Switch with a $17.99 asking price.

Disclaimer
This Here Be Dragons review is based on a Nintendo Switch copy provided by Red Zero Games.

Micetopia Out On PS4 And Nintendo Switch