Boomerang Fu from Cranky Watermelon is a colorful and fun arena-style physics-based party game with a food-based cast on Nintendo Switch. Learn more in our Boomerang Fu review!


In Boomerang Fu from indie Cranky Watermelon, you’ll be taking on a physics-based arena-style party game on Nintendo Switch with a cast of characters based on food. There’s an eggplant, an avocado, a banana, a carton of milk, a watermelon slice, a delicious donut, a shaking cup of coffee, a popsicle, a piece of bread, juicy bacon, a carrot, and even a piece of sushi for you to choose from! The game can be played in local multiplayer with up to six players having a go at it, so you can probably imagine how crazy things can get! 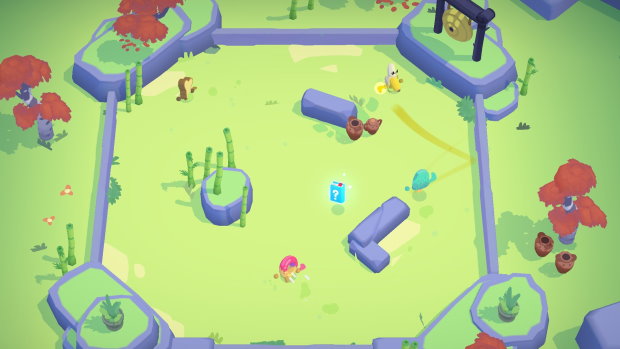 But just because the game has a local couch multiplayer component, that doesn’t mean you can’t have a shot at it while playing on your own! If you decide to play this one solo, you can add up to five bots to play against, as well as select their difficulty between the Easy, Medium, and Hard options. The game will be the one taking care of picking the characters the bots will be playing as so that you don’t know what you’re going to get.


The premise of the game is pretty simple: you will need to use your handy boomerang to be victorious in either one of the three available game modes. There’s Free For All, which, as its name suggests, everyone must fight for themselves to be the winner. In Team Up, you’ll be playing in teams as you try to defeat your opponents before they gain the upper hand. The last gameplay mode is Golden Boomerang. In this one, you must hold onto the golden boomerang for as long as possible. 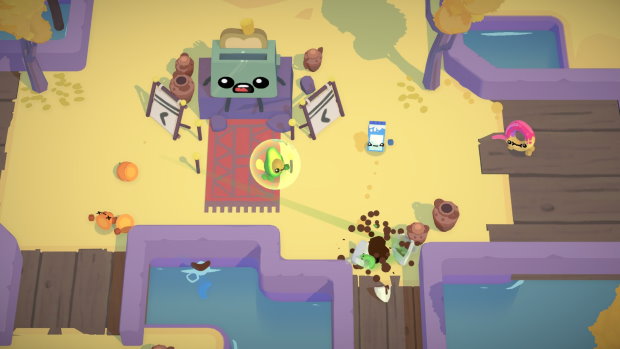 The controls are simple and to the point so that you can quickly get used to them and can dive into the action without any delays. You’ll move your character with the left analog stick, slashing at any nearby enemies with the A button, or throwing your mighty boomerang at them with the X button. When you need to avoid an attack, you can do so with the B button to dash out of harm’s way.


One hit is all it takes, so you need to be on high alert at all times. Each round will be played on a different arena, so you won’t be able to use the same strategy over and over again as you dash behind the same object for cover or find a great spot from which to snipe your enemies. You must also always do whatever it takes to catch your boomerang on its way back, or else you will find yourself with no way of attacking your opponents. Every enemy you defeat will be added to your tally, and whoever fills up its gauge first wins. 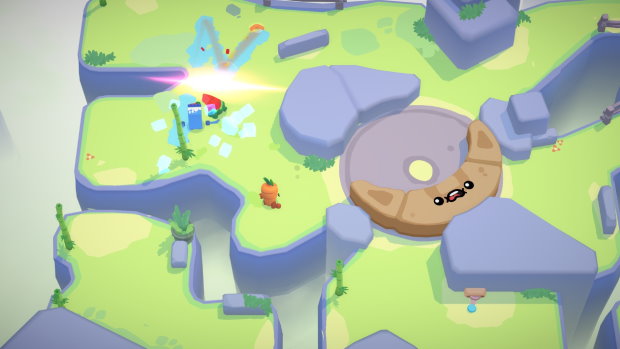 There will also be some power-ups to collect during each round. You could find a disguise to change your appearance or a fire boomerang that will make your sharp weapon even deadlier. You might also pick something up to pick you up with a heavy dose of caffeine or a forcefield that will protect your character from one hit so that you can take this opportunity to launch a deadly counterattack.


The arenas you’ll play in are small but varied, which helps to keep the whole experience feeling fresh even after hours of playing. Some stages will have portals to teleport you around from one colored portal to the other, or they could be set on rafts that move downriver at a steady pace. You might find yourself in a stage with a giant spinning croissant on its center, rotating non-stop, or another one in a peaceful fall setting with leaves on the ground, increasing your urge for a cup of hot chocolate.


There’s also the option of adding different modifiers to a match to customize the experience, or you can just play a match as is. The modifiers include changing the length for the match if the players who are losing should receive shields during subsequent rounds, if all power-ups will pop up during the match, or if you want to select some of them to sit it out if you can press and hold down the X button to pull back a dropped boomerang, or if boomerangs should fly slightly closer to enemies once thrown. 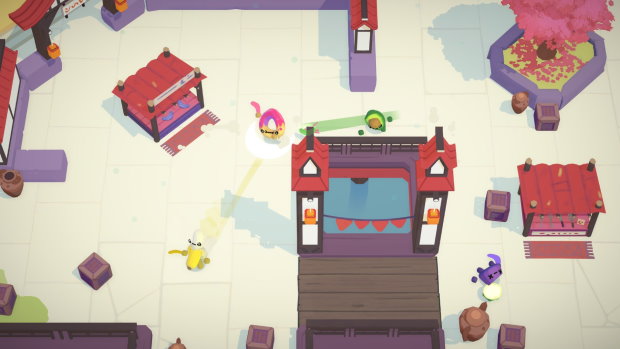 Boomerang Fu is a fun and hectic arena-style physics-based party game that’s a good couch multiplayer option on Nintendo Switch. While it only has three game modes to play, being able to take on them with up to six players as you move from arena to arena helps to keep this experience feeling fresh for a while. Boomerang Fu is out on Nintendo Switch with a $14.99 asking price.

Disclaimer
This Boomerang Fu review is based on a Nintendo Switch copy provided by Cranky Watermelon.

Root Double -Before Crime * After Days- Xtend Edition Out Today