Unrailed from Daedalic Entertainment and Indoor Astronaut is a colorful co-op and versus multiplayer game in which you’ll have to be quick to keep the train moving. Learn more in our Unrailed review!


In Unrailed from Daedalic Entertainment and Indoor Astronaut, you’ll be taking on a colorful voxel-based local or online co-op multiplayer session in which you’ll need to be as fast as possible to keep the train going non-stop. If you make any mistakes along the way and the train reaches the end of the track, then it’s game over, and you’ll have to start all over again! The game has a heavy focus on multiplayer, but if you want to play the game on your own, you can certainly do this since Unrailed will add a bot to help you, and you can give it commands by using emojis – more on these in a bit. 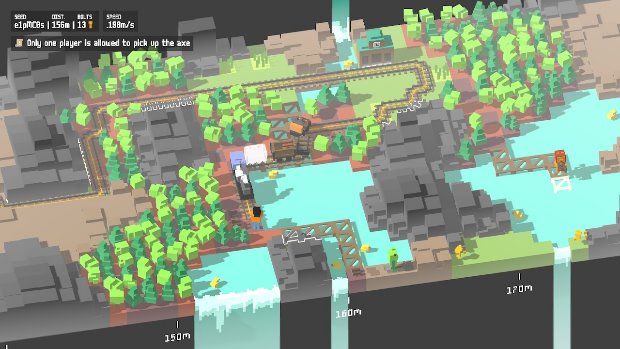 Once you’re ready to go, you can play Unrailed by taking on an Endless type of run, hop into a Versus round with two groups of players, go for a shorter Quick Match, or enter the Sandbox mode. Each of these can be played in Easy, Medium, or Hard difficulty so that players of all skill levels can have a shot at enjoying this one. You can also enable checkpoints so that you can restart at the first station in each biome – for which you’ll have a handful of variations – after the train has crashed.


Before taking on a new run of Unrailed, you will have to play through the game’s short tutorial so that you can get the hang of things. You’ll move your character with the left analog stick, and you can make it run by pressing and holding down the B button. To be able to craft new track pieces, you will require wood and iron, so be sure to grab an axe and chow down the trees you find by standing next to them. Iron needs to be mined from rocks, which means you’ll be needing a pickaxe to get the job done. Once you have the wood and iron you need, you can place them in the box wagon so that the crafting wagon can create the new track piece, which you’ll then use to continue building the track. 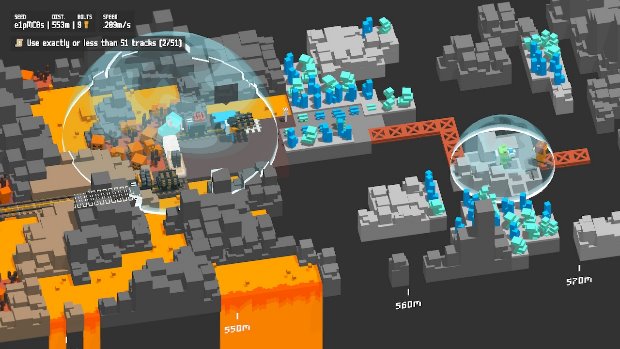 Tracks are not going to be the only thing you’ll have to build, since sometimes you’ll have to build across a river. When you run into this situation, you’re going to have to build a bridge so that you can connect the tracks. Bridges only require you to use a piece of wood, and once you’ve built one, you’ll be able to work on crafting a piece of track to place on top of it so that you can help the train carry on with its journey. Speaking of the train, it will end up overheating over time, which is why you’ll need to bring water to it to keep it as cool as possible. If you’re not careful, the train’s wagons could end up catching fire!


Since Unrailed is all about teamwork, you’ll need to use your emoji-wheel to communicate with team members. Just press and hold down the ZL button so that you can pick an emoji with the left analog stick so that you can convey what is needed. If you have to use one of the emoji that is not shown in the first group, just press into the left analog stick to show a new set. There are three sets of emoji you can display, so be sure to put them to good use! 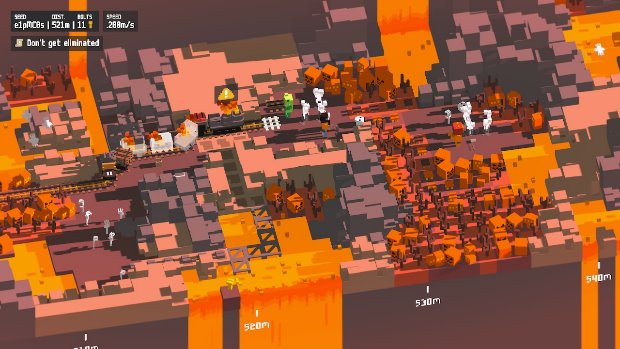 Unrailed features an in-game achievement system that will keep you busy as you try to complete all of the bonus objectives it has to offer. These include goals such as reaching 100m in endless mode on easy, hoarding 25 blots, successfully ignoring 50 train stations, flying around with a jetpack for 30 minutes in one round, using a lot of dynamite, crafting over 10,000 tracks in total, blowing up three different types of animal at once with dynamite, or reaching 2000m in endless mode on medium, to name some examples.


The game offers a couple of accessibility options to make it easier for some players to be able to play it. These include a Motion Sickness Mode to make it easier to not feel physical discomfort when playing in the lava biome, which can trigger a sense of unwellness due to screen rotation, as well as a Color Blindness Mode that will show the water content of the train next to the engine so that you can carry on with your journey with ease. 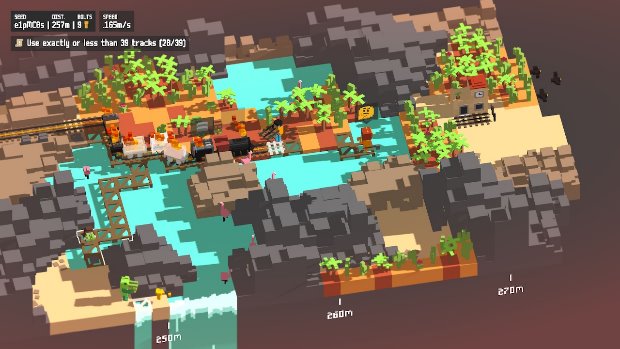 Unrailed is a run and hectic type of game that is best enjoyed with others. While it can be played on your own thanks to the magic of a bot assistance – and being able to direct its actions with the emoji wheel – nothing beats playing with other fellow humans either locally or online. There’s a nice variety of biomes to play in with randomly generated layouts, different game modes to take on, a dynamic weather and day and night system, as well as being able to upgrade the train by improving its wagons or by adding some new ones into the mix. Unrailed is out now on Nintendo Switch for $19.99, and it’s one I recommend you check out. 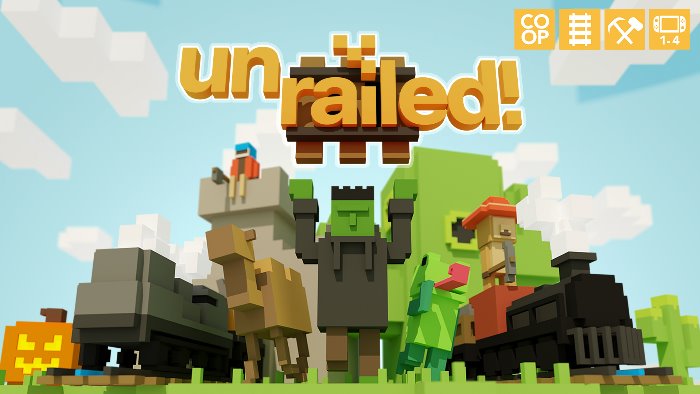 Fun and hectic co-op and versus multiplayer game

Disclaimer
This Unrailed review is based on a Nintendo Switch copy provided by Daedalic Entertainment.