Destrobots from 7Levels is a fast-paced arena-style top-down shooter on Nintendo Switch. Learn more about it in our Destrobots review!


In Destrobots from 7Levels, you’ll be taking on a top-down arena-style top-down shooter on for one to four players with easy to pick but hard to master gameplay mechanics on Nintendo’s hybrid console – or on it’s portable-only Nintendo Switch Lite variant. The game offers a Versus Mode with two types of matches – for up to four players – that are self-explanatory: Deathmatch and Last Man Standing. You can also play on the Horde Mode, in which you’ll be trying to survive the relentless horde of robots either on your own or with a friend in the local co-op. 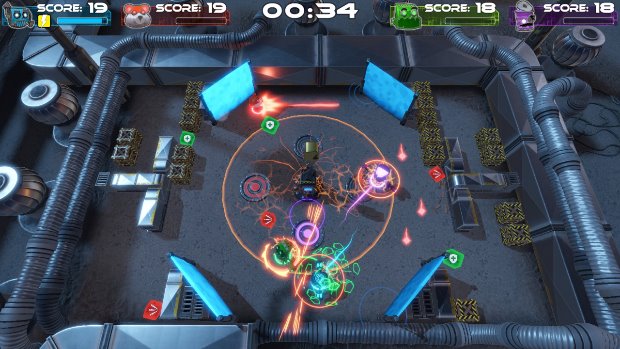 Destrobots has different arenas to play on, which will take you through a nice variety of locations. You can battle on a child room, a classic arena, an ancient Egyptian pyramid, a charming farm, a high-rise structure, a faraway island, a pirate ship sailing through the ocean, a North Pole styled village or even the moon! As you play on each of these in single-player or co-op in Horde Mode, you will get a chance to enter your name on the online leaderboards to try and prove you’re as good as you think you are. 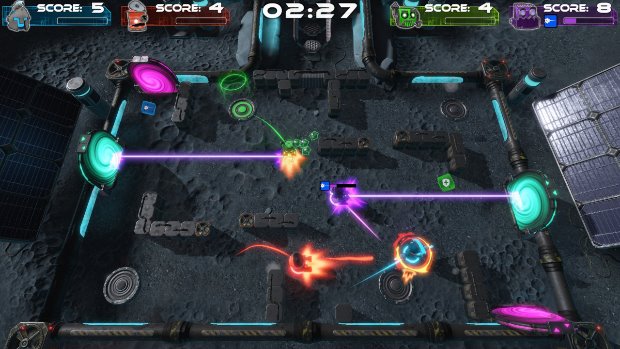 You’ll be controlling your robot with the left analog stick or the D-Pad to move in one of eight directions, shooting at everything around you by using the right analog stick or the A, B, X, and Y buttons, as you try to destroy other robots or items while collecting power-ups. These will unlock different weapon types and abilities for you, such as a triple shot, a powerful laser, a machine gun, a protective shield, or being able to move as fast as lightning. The L and R buttons will be for your melee attack, but if you time things right, you can use this to defend yourself from long-range attacks. 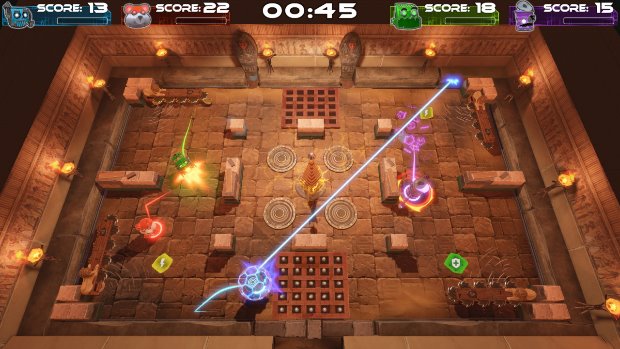 There are hazards to avoid in each arena, such as a Tesla tower that can keep you from being able to attack, large magnets that will pull you towards them with great ease, wooden structures that will push you, or some that will feature deadly buzzsaws that can destroy you in one go. You will also run into teleporters you can use to quickly travel teleport your attacks. There will also be mirrors that can ricochet your shots or spikes that will pop out of the ground. 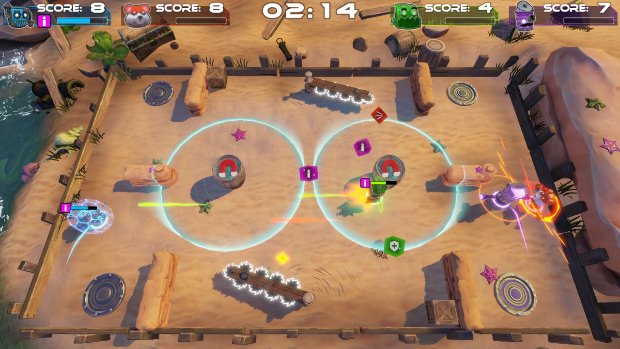 Destrobots is a fun local top-down arena-style single-player and multiplayer shooter that offers some hectic matches on Nintendo’s console. While you can indeed play the game on your own, this one is best enjoyed when fighting against other fellow humans in its local game modes. Destrobots is out on Nintendo Switch for a budget $9.99 asking price.

Disclaimer
This Destrobots review is based on a Nintendo Switch copy provided by 7Levels.