Breakpoint from The Quantum Astrophysicists Guild and Studio Aesthesia is a colorful and fast-paced top-down twin-stick score chaser on Nintendo Switch. Check our Breakpoint review!


In Breakpoint from The Quantum Astrophysicists Guild and Studio Aesthesia, you’ll be taking on a fast-paced top-down arcade-style twin-stick score chaser game with a minimalist but colorful presentation. Instead of the usual “move with the left stick as you aim and shoot with the right one,” Breakpoint has you moving around with the left analog stick, aiming with the right one, and attacking with the ZR button… with your melee weapon! There are no long-range weapons in Breakpoint, so you’re going to have to get up close and personal to attack your opponents. 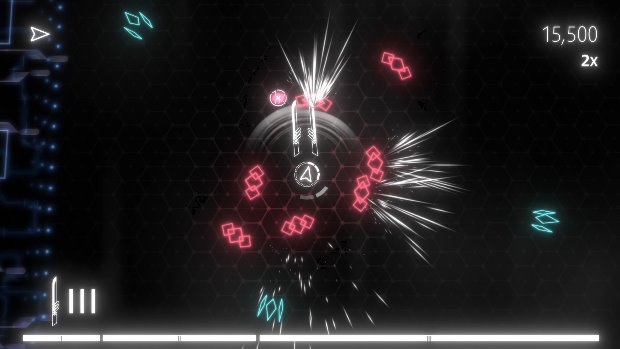 After a simple and to the point tutorial level that teaches you the basics while letting you know that The Quantum Astrophysicists Guild and Studio Aesthesia used Unity and FMOD for creating Breakpoint and bringing it to the Nintendo Switch, you will see a huge flashing logo for the game before being thrown into the first stage. In here, you’ll attack with the ZR or A buttons, use your heavy attack – which is slower – with the R or B buttons, and use a mighty throw with the ZL or X buttons.


The game is called Breakpoint because as you attack with your currently equipped weapon, it will reach a point during which it will break, which is not as bad as it sounds! You will have a Break Meter that will deplete as you deal damage to your opponents, and once it’s fully depleted, your weapon will break, but it will deal enemies with an area of effect burst. As you defeat enemies, they will leave behind shinning pickups you can collect to fill up your Break Meter and your overall charge, which will make the next break burst more powerful! 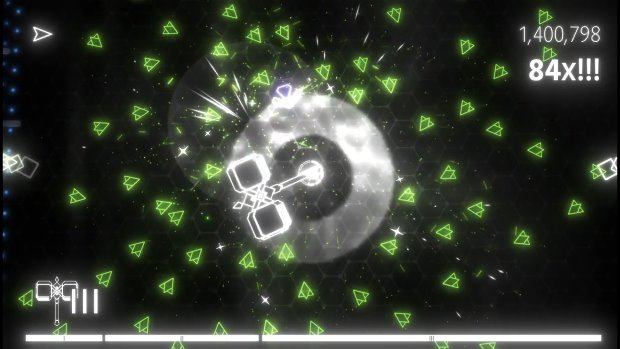 The longer you survive, the better your chances of getting a good multiplier going, which will have an effect on your overall score for that run. Why is this important? Because, in the end, Breakpoint is all about getting as big of a score as you can before you lose all of your lives. Every hit will kill you, so you need to be careful of not bumping into an enemy or being hit by an attack. The better your performance – your overall multiplier, how many kills you got, the total time you managed to survive – the higher you’ll end up on the leaderboard.


And after you lose a life, you will send out a break burst to destroy all enemies near you, and once you lose all of your lives and get a game over, you’ll immediately want to go back to give it another go! There will be smaller enemies that will be faster than other enemy types, rushing at you as soon as they materialize in the small arena space. Other enemies will remain in place as they emit multiple lasers from within, while others will give chase but move back a bit when you try to attack them, as they wait for the right window of opportunity to swoop in for the kill. 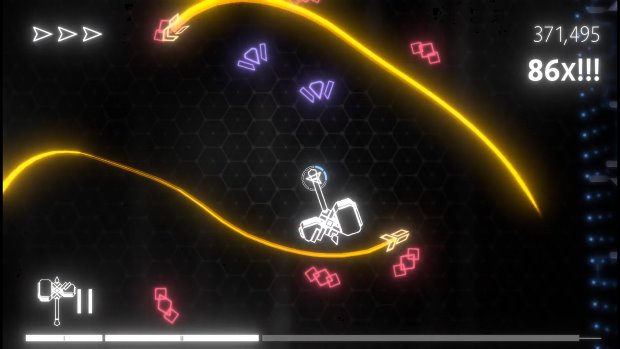 Breakpoint is an arcade-style “easy to understand but hard to master” type of game that is a fun experience on Nintendo’s console. There’s certainly a bit of strategy to consider for this one since you can’t just go in and button mash your way up the leaderboards. Making good use of breaks to destroy as many enemies as possible with each burst while avoiding any bullets coming your way, all while keeping an eye on the enemies that are near a break but are not caught in its area of effect, is a tricky experience. It offers a nice variety of enemies to battle against – going up against a swarm of Darts when there’s a Guardian shielding them is not a fun experience – but due to its randomized nature and arena-style gameplay, it’s a game that won’t be for everyone. Breakpoint is out on Nintendo Switch with a low $4.99 asking price that makes it an easy one to recommend for fans of arcade-style games with a solid difficulty curve.

Disclaimer
This Breakpoint review is based on a Nintendo Switch copy provided by The Quantum Astrophysicists Guild.