This is a double review for Alphaset by POWGI. EdEN and ThaRaven403 played the game, and this review presents what they both had to say.

Alphaset takes two concepts to mix them up together. The first concept you’ll notice when starting a puzzle is that of crossword puzzles. The puzzle is displayed in typical crossword fashion, with around fifteen words interconnected together either horizontally or vertically. Each word has some letters already filled in, with a few blank spaces that you’ll have to complete once you find what the hidden word is.

The other concept is Sudoku because of the deduction aspect. Instead of trying to place the numbers from one to nine on different cells, what you have are the 26 letters of the alphabet displayed on the right side of the screen. Each letter can only be placed once, so you’ll have to use your deduction skills to find out some easy words to work your way towards completing the whole grid. As you place some letters, you’ll be able to use the Triangle button to verify for any mistakes, which will remove the erroneous letters for that puzzle.

Visually, you won’t find anything different than with other POWGI titles, other than the occasionally available Dark Mode so that your eyes aren’t hurt by all the white on the screen, which is available in this title. The music that plays is the same as in pretty much all the titles, which is something I’d like to see some variation after all the titles that have been out. 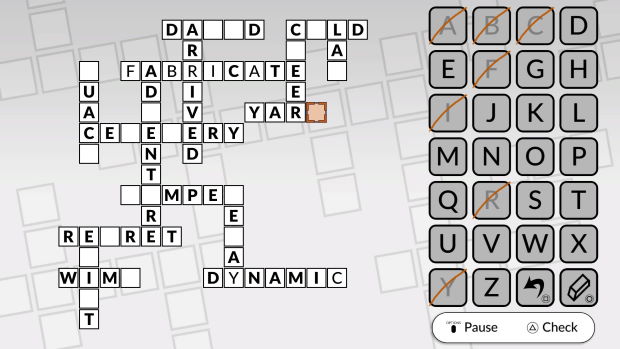 I’m always happy for any POWGI title that comes out, even more for an original one. I really enjoyed the concept behind this game, and a lot of effort was put in the game to make a total of 120 puzzles using all the letters like this. Although it would seem simple, I found the puzzles to be challenging – that is, unless you abuse the error checking feature. There’s definitely going to be some trial and error on your end before you can start to spot the words you need to find within the crossword grid.

As for the trophies, in typical POWGI fashion, it’s a rather simple Platinum to get. The majority of the trophies are to find some specific three-letter words, which can be relatively easy if you follow a trophy guide or simply decide to play all the puzzles. While doing this, you’ll get the trophy for completing 30 puzzles, and after that, only a few should be missing for that Platinum. This is a Cross-Buy game, which means you can end up getting two Platinums if you own a PlayStation 4 and a PS Vita. 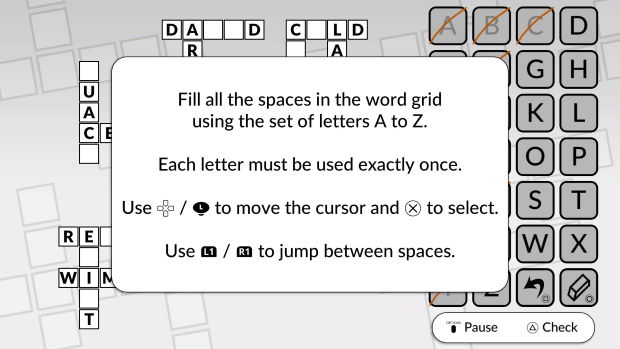 The POWGI series of release from Lightwood Games are some of my favorite games on PlayStation 4 and PlayStation Vita since they’re always trying something new here and there while still remaining true to their “you’re going to be using letters and words during your time with this one” essence. I’ve played several entries in this now long-running series, so I was definitely up for reviewing Alphaset on PlayStation!

Alphaset by POWGI is an easy game to get the hang of, while also giving your brain a good workout. You’ll be presented with crossword puzzle after crossword puzzle in which some of the letters will be missing. You will only have to worry about using every word on the alphabet once for each of the puzzles you’ll be tasked with solving, so as long as you can spot the missing letter for a handful of words, the rest will easily be solved, as long as you pay attention to what you’re doing. 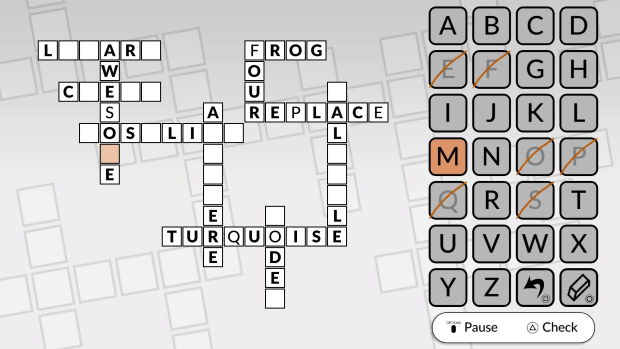 As ThaRaven403 mentioned, the key for unlocking the different trophies in Alphaset will be to find specific words within specific puzzles, with key being one of the words you have to find for a trophy! As expected, the trophy names will be heavy on the puns, with names such as Key-p On Keeping On – for finding the aforementioned key -, A Matter of Fax – find the word fax -, or Cow-abunga – you can probably guess which one is the word you have to complete.


Alphaset by POWGI is an original and fun title to play for any fan of word games. On top of that, it’s an easy Platinum to get for all you trophy hunters out there. The game is out now on PlayStation 4, and it’s a Cross-Buy release at a budget $7.99, which means that if you buy the PlayStation 4 version, you’ll get the PlayStation Vita version for free, or the other way around, which will give you a chance to work on adding a pair of Platinum trophies to your collection!

Disclaimer
This Alphaset by POWGI review is based on PlayStation 4 copies provided by Lightwood Games.

Umihara Kawase BaZooKa! Out This Month