Windbound from 5 Lives Studios and Koch Media is a new survival exploration adventure on PS4. Learn more in our Windbound review!


Your journey begins after you find Kara shipwrecked on an unknown island. You battled against the wind and the ocean, but it seems your vessel was destroyed by a giant, bizarre creature. You have been separated from your tribe. After nearly drowning, you will get a second chance at life… after stepping through a magical portal? Or perhaps it was all a dream as you hallucinated for a bit due to loss of oxygen. Either way, you’ll begin at Forbidden Islands during the first chapter of Windbound, and will need to find a variety of resources to survive.

As you can tell from the screens and the trailer in this Windbound review, the game does pay homage to The Legend of Zelda series, particularly to the excellent The Legend of Zelda: Breath of the Wild, with a dash of The Legend of Zelda: The Wind Waker. You’ll be exploring each set of islands, discovering elements of an ancient, long-gone civilization, which might tie into Kara’s present… and her future. Why are the ruins she finds so different from everything else around them? What are they hiding? 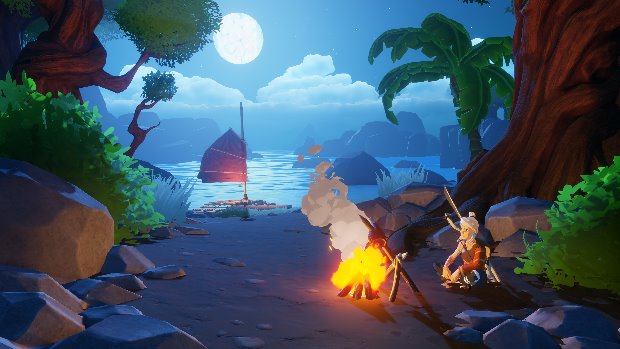 You can take on Windbound by playing either in the Survivalist or the Storyteller difficulty setting. Survivalist is billed by the game as the mode to play if you want to get the full Windbound experience, and it considerably dials up the challenge. Only the items you’re currently holding will be retained when you die, and death means you’ll be sent straight back to chapter 1 to give it another go. Storyteller allows you to retain your full inventory upon death, your progress is not reset, and combat is not as hard when compared to Survivalist.


You’ll move your character with the left analog stick, swinging the camera around with the right one. Press and hold the Circle button, and you’ll be able to run. You can jump a bit the X button and can attack with the Square button. Speaking of which, if you press the L2 button, you will go into a lock-on mode, which will allow you to focus on your opponent as you dodge its attacks with the X button, waiting for the right time to strike. Walking up to a resource will allow you to collect it by pressing the Triangle button. Say you find some thick grass. You will then use your handy knife to cut it down, which will automatically bundle it up and add it to your inventory.


Attack a Razorback – and be victorious – and you’ll get a chance to interact with it so that you can get you some bones. Sure, bones are far from what you’d want to use to build something, but they’re lightweight and offer a good balance between overall strength and durability. A larger specimen might also yield some raw meat – of the small and large varieties – and some skin. While, yes, you could indeed eat meat in its raw state, its restorative effects would only be temporary, which, in the long run, is not what you want to do.

Hunger will lower your overall maximum stamina, which will limit the actions you can perform. Low stamina is bad if you want to outrun an enemy! And what happens if you’re so hungry that all of your stamina is gone? Well, then you’re going to be one step closer from starving to death! If you want to quickly heal and recover, you can press up on the D-Pad so that your character ends up eating any food you’re carrying. 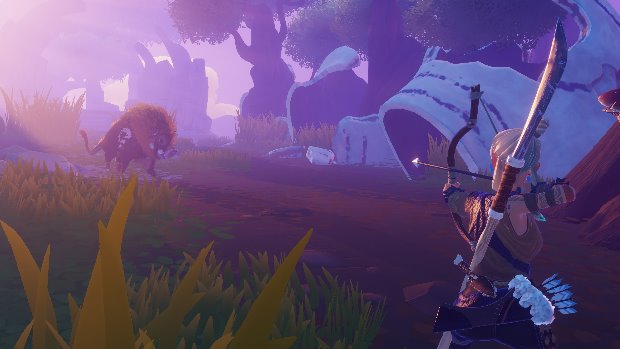 Grab yourself some rocks from a small nearby island, and you should have enough materials and resources to start building up the items that will aid you in surviving the harshness of nature. Once you’re in a safe spot, press the R1 button to open up your inventory, as well as the crafting menu. While in there, you can use the recipes at your disposal to build a nice variety of items. Start by building a grass rope, and you will unlock a recipe for a palm bag, which will require two grass ropes as well as some palm frond. But before you craft that, maybe you should use a grass rope and some thick grass to build a simple – but effective – grass sling?

Once you have a grass sling, and as long as you’ve also collected a bunch of rocks from the ground, you can press the R2 button to start to build up some momentum before you unleash the mighty rock towards an unsuspecting animal, so that you can gain the upper hand in battle and lower the potential world of hurt attacking a pack of Razorbacks would put you through. You can then maybe focus on upgrading to a leather sling, as well as on crafting something to boost your inventory space.


In Windbound, you’ll be building boats so that you can travel between the islands. Once you find an ancient ornate oar early in the game, the boat parts section of the crafting menu will open up. First, up will be building a grass canoe. This is a very basic boat that will not be able to take a beating, so if you’re going to build one, you’ll need to make sure there are good odds for smooth sailing. Just craft two grass ropes and collect four extra pieces of grass, and you’ll be ready to go! You won’t be going too far as you steer your vessel, but it certainly beats swimming, right? Later on, you’ll be able to craft bigger and better boats, but you’ll still need to pay attention to how the sea behaves and which way the wind is blowing so that your boat doesn’t end up being flipped over. 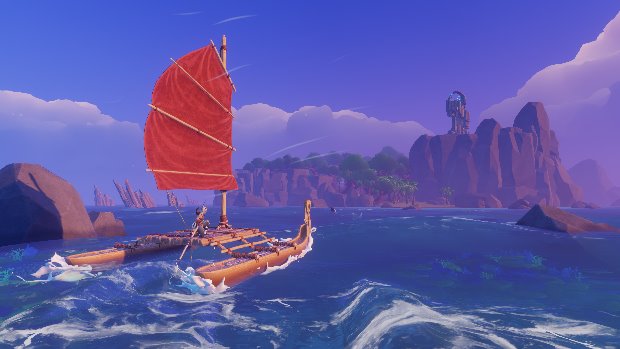 Windbound has a full trophy list with a Platinum for you to add to your collection, as long as you have the patience needed to learn how the game works. Due to its roguelike nature, the randomly generated content could help you achieve some trophies faster than others, or you might be dealt a bad hand – so to speak – and end up dying from hunger because there wasn’t enough food in the island. There’s a ton of collecting in your future, not to mention a lot of crafting since you’ll have to craft one of each item, food, boat part, and article of clothing. There’s also a pair of trophies for completing the game without eating any meat, while the other asks that you turn into a carnivore. Add a trophy for finishing the game without crafting any weapons or killing any creatures, and you can imagine how hard it will be to add this Platinum to your collection!

Windbound is a fun and challenging roguelike on PlayStation 4 that pays homage to The Legend of Zelda series while adding some survival elements to spice things up. If you want to dial back the difficulty, you have the option of switching from the Survivalist mode to the Storyteller mode, so that if you die, you don’t end up having to start all over again from chapter one. Windbound is out now on PS4 with a $29.99 asking price.

Disclaimer
This Windbound review is based on a PlayStation 4 copy provide by Koch Media.