RPG Maker MV from NIS America is ready for those of you who want to master game development on PS4. Learn more in our RPG Maker MV review!


After the intro cutscene is over, the first thing you’ll have to do is play through the tutorial for RPG Maker MV, so that you can learn the basics of what the game has to offer. As you control a young boy who is going through a classic turn-based RPG scenario, you’ll be given a chance to edit the game since it’s missing the flowers your character has been asked to retrieve in order to be able to complete your first quest ever. You are, after all, a Maker, so you have to use your power to create new things! 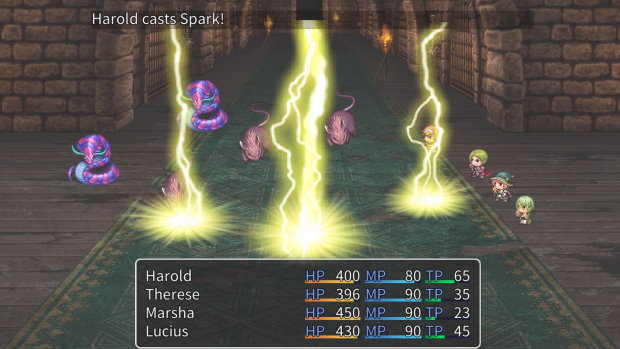 The game will then show you the user interface so that you don’t feel overwhelmed. There’s the Map View Screen, which is the area where you can place tilesets and work on building your game. Next to that on the left is the Tile Palette, which is where all the tiles are displayed, so that you can select the one you want to add to your creation. Below that is the Map List, which will show you all the maps that are currently part of your work-in-progress game. You can switch between all three of the aforementioned areas by pressing the Square button, navigating through each one with the left analog stick or the D-Pad as needed.

Going back to the tileset, you will need to select between four different types of tiles. The A tile palette will show the bottom-most layer you can set on the screen, which will be used as ground or flooring. The B tile palette is for items that sit in the ground, as is the case for, say, flowers. The C tile palette has the items that are displayed uppermost, such as flags, larger statues, columns, and more. The last one is the R palette. The R stands for region, and it’s used for establishing things such as having NPC moving only within the specified region. To switch between all four tilesets, you can press the L and R buttons.


To expand your game and the adventures your characters can experience, you’ll have to create events in each area. These events include things such as treasure chests or connecting different areas for transitions. Press the L2 and R2 buttons to switch to the events mode. You will know that events mode is active because a grid will be shown on the Map View Screen. You could, for instance, use the Quick Event Creation option to select Transfer for the tile on the edge of the screen, which will then your character will be able to use to switch to another area. 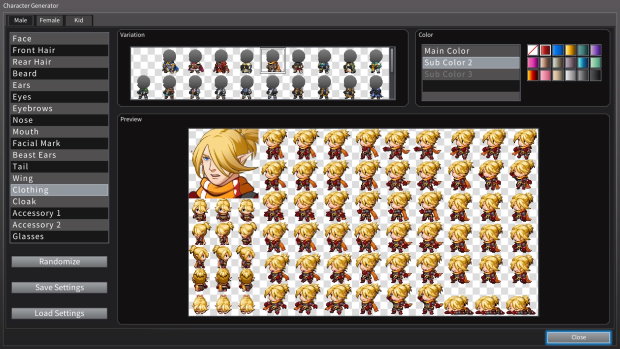 You do need to be aware of how doing this means a character can exit an area… but it then won’t be able to return to the previous area unless you place a transfer on a tile that goes from the second location back to the previous one. Along with selecting where that transfer will take a character, you can also select the direction it will be facing after the transfer. Say you’re going from the overworld field into an area with a small house. If the entrance to this area is on the left side of the screen, then it would make sense to set the direction a character will be facing when entering to be right, so that it can immediately move forward.

While Quick Event Creator does its name justice, the proper full-fledged event creator will require some extra work before you can make the most of what it has to offer! You will need to set a name for the event and can configure it so that it’s triggered when certain conditions are met. Image will be for establishing the image – or images – for said event so that you can set up some NPCs. You can establish the walking speed of an NPC and if it will have autonomous movement. If that is not the case, then that particular NPC will remain in place. You can make an NPC approach your character, have it move around a specific path, or perhaps make it move after your character talks to it. 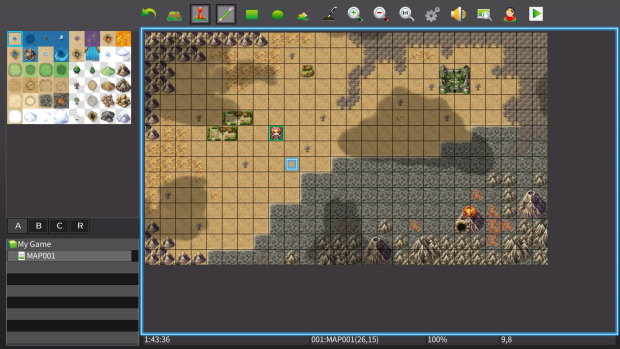 Movement is only part of what you can configure an NPC to do since you could also have it speak to your character by adding lines of dialogue. You can pick the face that will show up over the dialogue window – which should definitely match the NPC you’ll talk to! – as well as type in the text for said dialogue window. Remember, there’s a finite space in the dialogue window, so make sure the text you have in mind will fit within the given space. Once you’re happy with what you’ve configured, save your work, and give it a test!

You can, of course, also configure the enemies your heroes and heroines will battle against, establishing their looks, names, overall stats, skills, gold, and item drops, experience points it will award players once defeated, and more. You will need to access the Database to configure this, and many other things! The Database can contain a ton of information, which is why it’s split into a variety of categories so that you can always find exactly what you need. There are characters to configure, which are set in the Actors and Classes lists for setting up characters and establishing their attribute values and learnable skills. Skills has, well, the skills for both characters and enemies.

Items will be used for establishing the items that can be used on the field or when in battle, as well as any key items that could be part of a quest or two. Weapons and Armor will be for the equipment you can use to deck out your characters so that they can hopefully stand a chance against what you’ll be throwing at them. Enemies can be configured on their own or presented as part of enemy groups, which is done in the Troops section. To spice things up, you can set status effects in the States section, and in Animations, you can set any of the animations that will play out when skills are activated. You can configure the tiles that will be displayed for tilesets A to C, and you can even work on creating additional D and E tabs if needed. 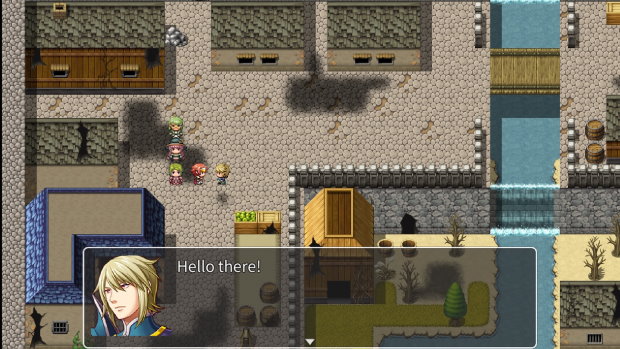 System is an important section of the Database since it will contain all of the settings that will affect your game. This could, for instance, be edited for the starting party in the game, the background music that will play when in battle – a.k.a the battle theme -, and more! There’s also the Game Info section where you can set the game’s title, the configuration for uploading the game to the internet, the game’s genre, the image for the title screen, the command window, the end credits – which could display a variety of names in case you have any staff members that have contributed to the game’s creation.

In the lower part of the Database is Region, which will allow you to decide on the settings for the different regions for your game creation. And then you have the Terms section where you will need to establish things such as the basic statuses – level, HP, MP, experience points, etc. -parameters, commands for battles or menus, message types, and the text to accompany them. As you can now realize, there’s a ton of things you can do with RPG Maker MV if you decide to take it for a spin!

RPG Maker MV is a full retail release, which means that it has a full trophy list with a Platinum trophy for you to add to your collection. The first trophy you’ll unlock will be for completing all of the game’s tutorials, and after that, the other trophies will unlock depending on which parts of your new RPG you’re focusing on during development. There are trophies for creating 20, 50, and 100 characters, for creating 10 and 50 maps, for configuring 10 and 50 classes, and for doing the same for items, weapons, and armor, as well as for configuring 20, 50, and 100 enemies. You will also need to change colors 100 times, changing the BGM 50 times, and for configuring 100 map transfers. The other trophies are tied to adding a ton of events and tiles to your game, as well as for playing the game for 10 and 50 hours. 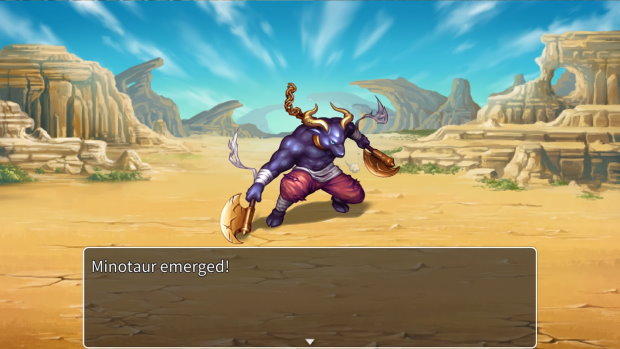 RPG Maker MV is a fun way of getting your feet wet with game development, as it offers a robust set of tools that will help you get started. There are going to be DLC packs that add more variety to the game’s assets, so once you get started, it will be hard to stop! Sure, the whole process is a bit slower than if you were playing this one on PC, but it’s still a solid option for hobbyist RPG creators. RPG Maker MV is out now on PlayStation 4 with a $49.99 asking price, and you can get it digitally or at retail.

Disclaimer
This RPG Maker MV review is based on a PlayStation 4 copy provided by NIS America.