In Aviary Attorney from Vertical Reach, you will go on a peculiar journey that will take you all the way back to 1884 Paris, in a game that fans of Capcom’s long-running Ace Attorney series – of which we got five Phoenix Wright games and one Apollo Justice release – are going to love on Nintendo Switch. You will take on the role of one Monsieur Jayjay Falcon, a lawyer of sorts, who, alongside his witty apprentice, Sparrowson, will try to work their way through the legal system in order to bring some sweat justice into this 19th-century world. Oh, and if the game’s name, trailer, and the screens in this review haven’t clued you in, they’re both birds. 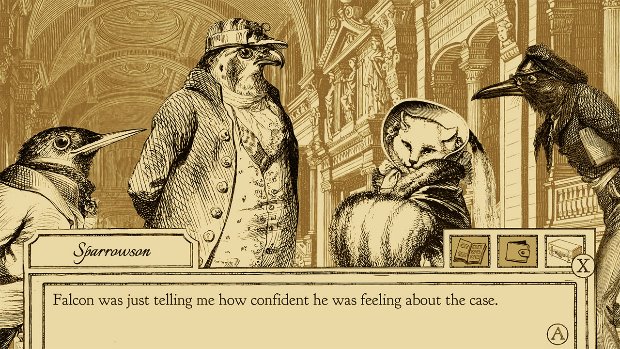 Sketchy Logic took Aviary Attorney to Kickstarter many moons ago, way back at the end of 2014, asking for a more than reasonable £7,000 for its funding goal. By the time the campaign was over, the project had managed to secure the support of more than 1,500 backers who pledged almost £16,000 in total. After a short delay of a handful of months, Aviary Attorney was released on Steam by the end of 2015. Four years and change later, the game is now out for Nintendo’s hybrid console.

The game is based on the distinctive art of 19th-century caricaturist Jean Ignace Isidore Gérard Grandville – a.k.a. J. J. Grandville. His art showcased individuals with very detailed human bodies, but with the heads of a variety of animals. Dogs, hogs, rabbits, cows, frogs, donkeys, and, yes, birds, were used by the artist as a tool for political commentary of that era. His art for Aviary Attorney: Definitive Edition is complemented by the music of French composer, organist, conductor, and pianist Camille Saint-Saëns.


Without spoiling things too much, allow me to talk a bit about the first case in the game. You will be hired to defend Dame Caterline Demiaou, a bourgeois feline who is being accused of bloody murder. As you talk to Sparrowson, you can decide to take on her case on her case right away or decline. If you decline, you will be taken to a short mini-game section for a game called Jacques-noir, which is basically a game of Blackjack with some lovely artwork on the cards. The wager for this particular game will be simple: if Sparrowson wins, then they will take Dame Caterline’s case. If he loses, then Jayjay Falcon will get half of Sparrowson’s check for the month… which, as it turns out, isn’t much. 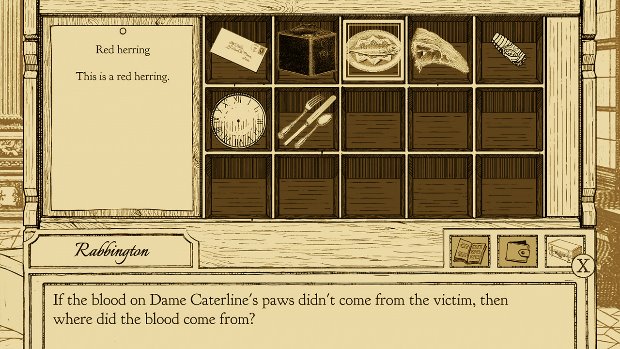 Once that is settled, your first piece of evidence will be added to your evidence folder. You can access this folder by pressing the X button while the suitcase symbol is highlighted. You can change which symbol is being highlighted by pressing the L and R buttons as needed. In your evidence folder, you can review each piece of evidence that you have found as you try to build a case to defend your client. You will also have access to Falcon’s wallet, which will secure the total of francs that he has in his possession at all times. Be careful, because your actions in the game can have an impact on how many francs you will have at your disposal!

As is the case for the games in the Ace Attorney series, there’s going to be a lot of reading in your future! You’ll be visiting a variety of locations, which you can access from the map screen. If an area from the map’s list has a clock next to it, then that means it’s going to take you a whole day to visit it. If there’s no clock, then you can take your time and explore as you please. As you move from area to area, you can interact with other characters, as will be the case during your visit to the prison at La Conciergerie, where you’ll get to talk to Dame Caterline.


You will learn more about the case once you interact with her. She will tell you that it was a Friday when she and her father arrived at Château Crinière, the home of the great Baron Rogueil. Her father spent all evening discussing business with the Baron and with Monsieur Grenwee since they own a railway company together. The evening was a bit more fun when someone took an image of them with a camera, a device in which a tiny bug sits inside of a box with a tiny paintbrush, quickly painting a picture to capture the moment… all in ten minutes! At least that’s how she believes this contraption works. 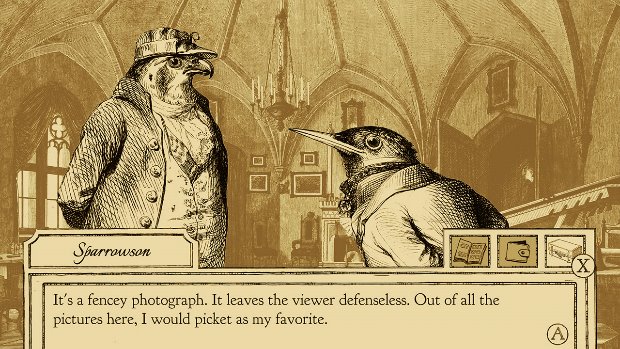 It was all fun and games until Dame Caterline decided to step out and into the gardens, in order to get some fresh air. It was then that she, unfortunately, found the body of Monsieur Grenwee. A housemaid by the name of Couline saw her standing over the body and immediately called for help, and when the police arrived, they arrested Dame Caterline for the murder. Your job will be to find out who the real killer is so that you can help your client overcome this peculiar predicament.

As you meet new characters, Sparrowson will keep tabs on all of them thanks to the help of the handy Face Book. This will be a must for him since it seems he ends up getting confused by names rather easily. The Face Book will, therefore, be a collection of the names, pictures, and descriptions of all the people that you meet. Just from your initial interactions, the Face Book will be automatically populated with information on Jayjay Falcon, Sparrowson, Purrtoir Demiaou, Kwark, Dame Caterline Demaiou, and the late Monsieur Grenwee.


And then, there are the trial segments. When in court, you will get to listen to the statements from each of the witnesses. Pay attention to what they have to say, and be ready to cross-examine them as you try to find the one thing here and there that can allow you to prove they’re not truthful. Find something contradictory in their statements, and you’ll get to use the evidence you’ve collected for that particular case to prove your theory. Just be careful because if you make too many mistakes, you could end up losing the case! 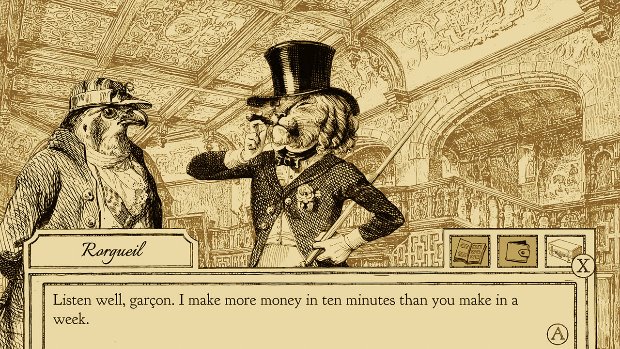 There are fifteen medals for you to earn while playing Aviary Attorney: Definitive Edition. There are medals for completing each of the first acts of the game, as well as for completing the fourth and final act by obtaining one of the three potential endings that Aviary Attorney: Definitive Edition has to offer. The other remaining nine medals are tied to actions and decisions you will take as you progress through the game’s story, which I won’t spoil here!

As a fan of the Ace Attorney series, I was definitely more than up for reviewing Aviary Attorney: Definitive Edition on Nintendo Switch. The game makes great use of the art of J. J. Grandville and the music of Camille Saint-Saëns to weave an intriguing story that is full of puns here, there, and everywhere, thanks to its anthropomorphic cast. Aviary Attorney: Definitive Edition is out on Nintendo Switch for $19.99.

Disclaimer
This Aviary Attorney: Definitive Edition review is based on a Nintendo Switch copy provided by Vertical Reach.