[Beyond PlayStation] Aokana – Four Rhythms Across the Blue Review

Soar through the skies with Flying Circus, the sport that has swept the world. As a coach, train your team, and maybe fall in love. Check out our Aokana – Four Rhythms Across the Blue review!


Welcome to a world where people fly freely through the power of anti-gravity shoes. Become a coach for players who race in the sky and make the acquaintance of four charismatic girls. Follow their adventures as you all grow closer in this emotional story of hope, love and sportsmanship.

– Engage in an enticing story about sportsmanship and team spirit amongst a group of friends!

– Develop a romantic relationship with Asuka, Mashiro, Rika and Misaki; four spirited girls who may very well fall in love with you

Aokana – Four Rhythms Across the Blue is a new visual novel in which you play as Masaya Hinata, a former Flying Circus star, who suffered trauma while playing and decided never to play again. Wait, I’m getting ahead of myself there. Let’s talk about what Flying Circus is. In this world, anti-gravity boots – or Grav Shoes – have been created, allowing people to fly to any destinations. Someone saw the option to turn this into a sport, and Flying Circus was born as two people fly off and challenge each other in the sky. Okay, now back to Masaya. As mentioned, he had an accident and now refuses to do Flying Circus, even avoiding Grav Shoes whenever he can.


Somehow he is convinced to join his high schools Flying Circus team as a coach and ends up coaching four girls, whom you’ll spend most of your game engaging with and eventually maybe learning to love again. Like most visual novels, as it is to be expected, the game tells its story with a ton of text, and you’ll have dialogue choices that will influence which path the story goes in. It follows this format pretty religiously, even during all of the Flying Circus sections. One thing I did really like was that the team broke the story into segments, giving the feeling that you are playing an episodic TV show.
This definitely made it possible to play the game by taking breaks. I sometimes find visual novels a bit draining if I play for too long, ending up making not the best choices. Punchline is another game I reviewed back in 2018, and it did something similar. 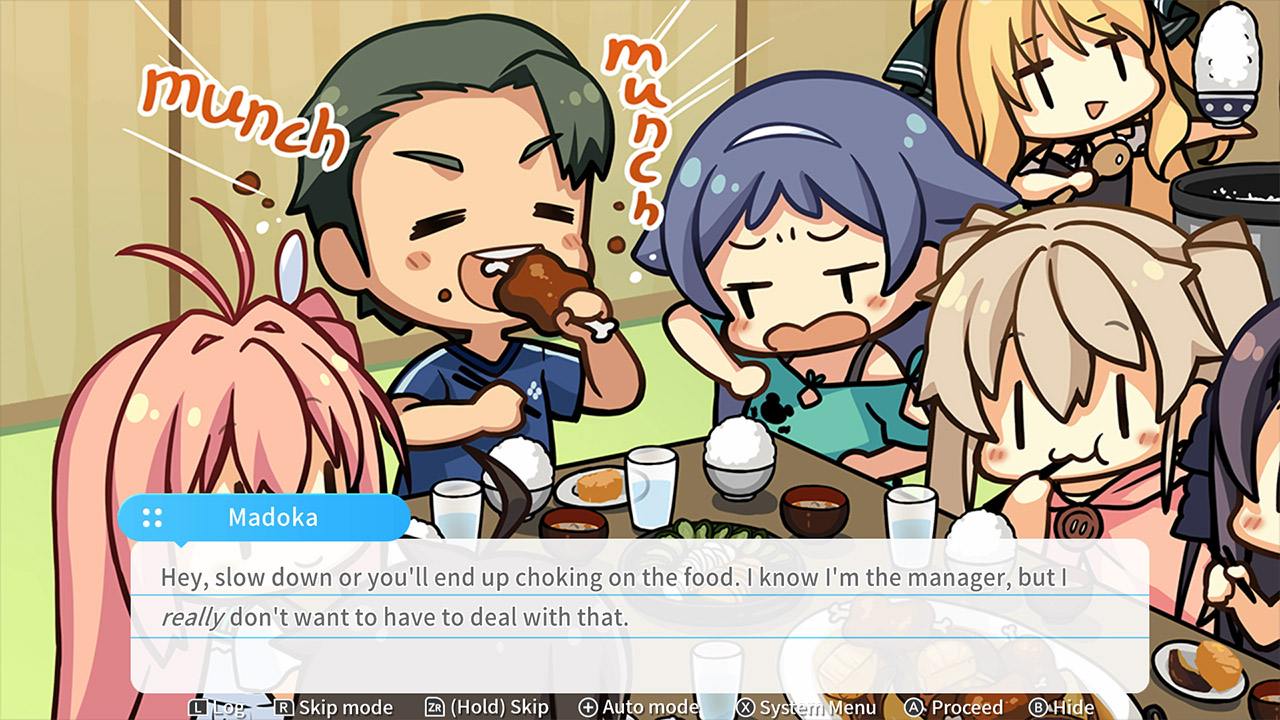 What really needs to stand out in any visual novels is the story, characters, and visuals, and boy, does Aokana – Four Rhythms Across the Blue deliver! I wasn’t sure if I was going to connect with the material when I started to play, but to my surprise, I actually found everything in this world very engaging. Flying Circus was actually interesting, and while you don’t actually play it, they found a neat way to use the visual novel to tell the story and keep it engaging. Normally in these romance visual novels, the different girls all follow archetypes, so I was surprised when they actually all really stood out in interesting ways. The game clearly favors one girl who is introduced early on as the main character, but you could choose any of them and be surprised and delighted by the results of the story and the different beats you’ll experience. 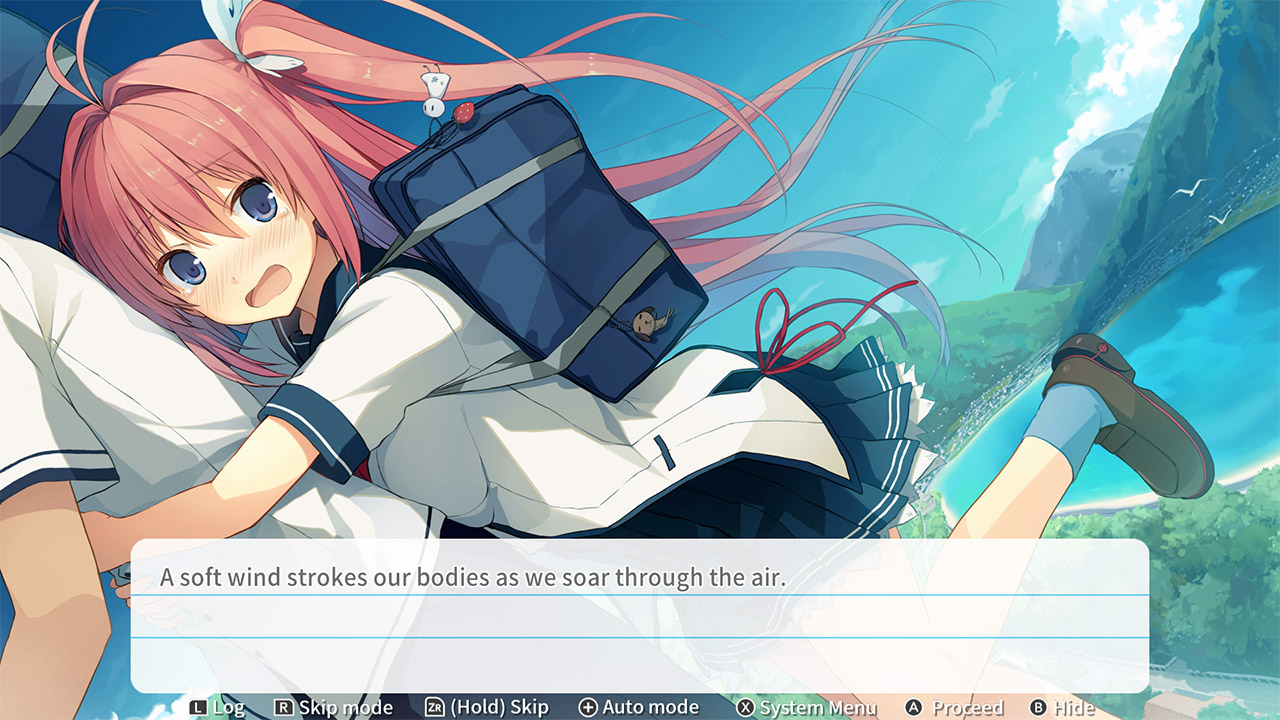 My one issue is the fact that at no point do you really deviate from the visual novel format. I brought up Punchline earlier, and I will again here. It broke up the visual novel sequences with games you played in between doing things as a ghost, which felt like a nice way to make it feel different and to keep things fresh. With the background story about what happened to the main character and the whole world everyone now lives in, I wouldn’t have minded some minigames to play here and there to change the pace of things. 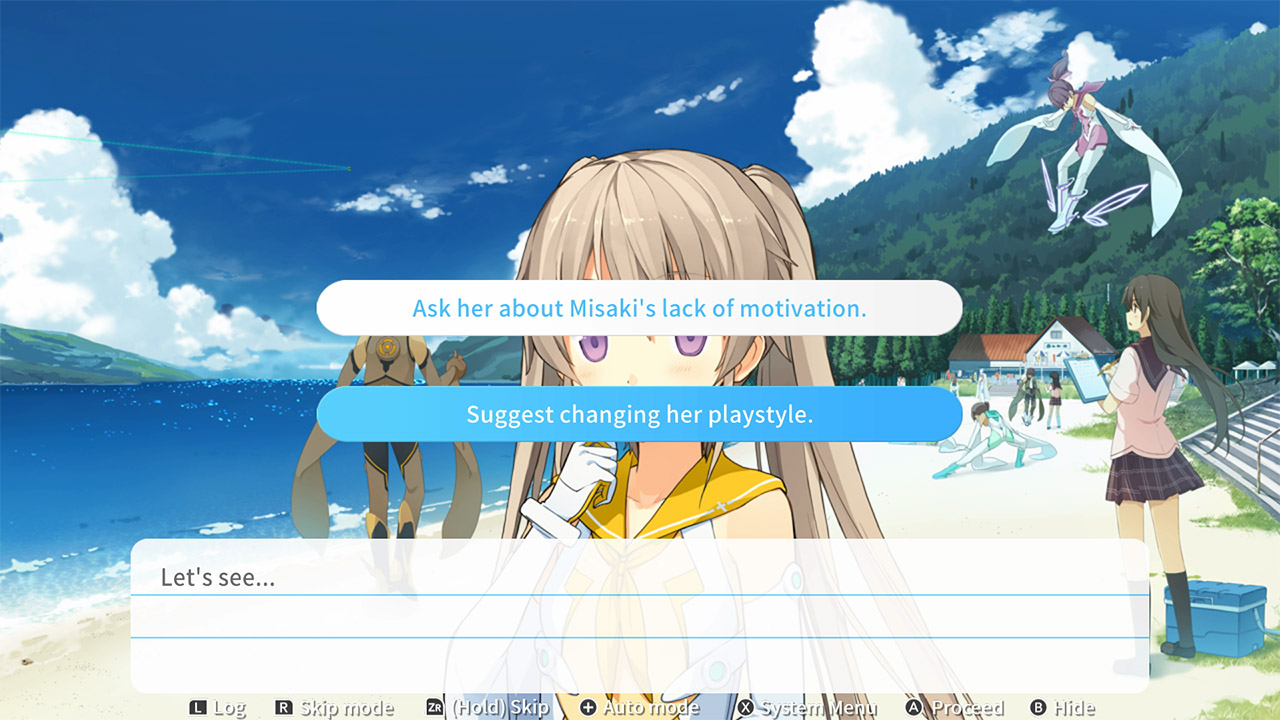 Visually the game is gorgeous with a great art style and really strong sprite, with everything having a solid hand-drawn look. The game looks great on the Nintendo Switch’s handheld screen, and even better when I had it playing on my 55″ TV on my wall in the living room. At certain points, as well during more comedy moments, the art style would shift to a more chibi style, which really suited the mood and made me smile when it was used. They didn’t overuse it either, making each time feel more special.

As this is a romance game, there will be times when you can sleep with the person your romancing. The actual sex scenes have been pulled from the game on Switch, but that doesn’t mean you won’t find fan service moments, so you might not want to play this one in front of your kids or your wife. Just beware of who you’re playing around! 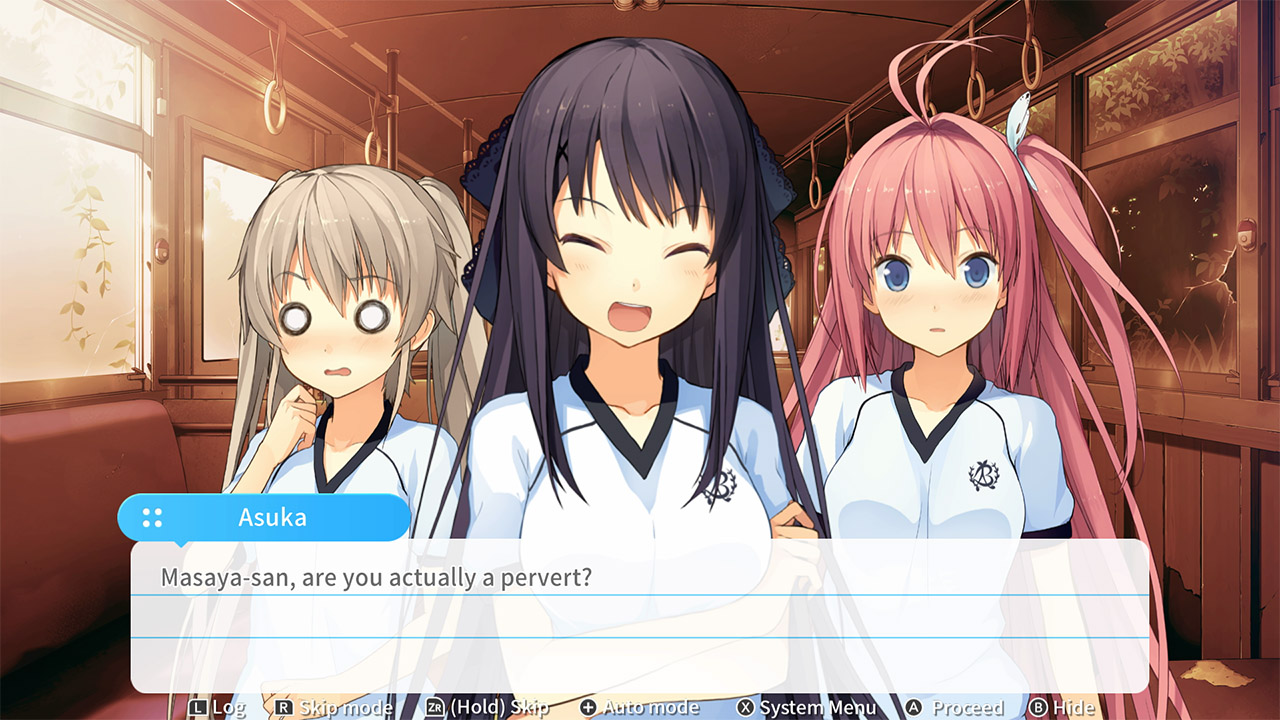 Aokana – Four Rhythms Across the Blue is a fun visual novel that features top-notch visuals and a great story to tell. It’s not a short adventure to take on, and I would have liked Flying Circus to be a playable minigame within the whole experience, but it’s not a dealbreaker. If you are a fan of visual novels, this one is worth checking out.

Disclaimer
This Aokana – Four Rhythms Across the Blue review is based on a Nintendo Switch copy provided by Pqube.