Fall down the rabbit hole into a world of wonder in this fantastic PlayStation VR release. Check out our Down the Rabbit Hole review!


Is there truth to the Cheshire Cat’s declaration “we’re all mad here”? You will soon find out. Down the Rabbit Hole is a VR adventure that serves as a prequel story to Lewis Carroll’s classic Alice in Wonderland tale. In the game, you will discover a girl in search of her lost pet Patches that has wandered into Wonderland. You will guide her as she moves through the mysterious world looking for her missing pet. But which way?

You control the girl’s fate by plotting her journey through an immersive diorama that wraps around you. Through the game’s many twists and turns, you will find yourself exploring the most wondrous corners of Wonderland, solving puzzles, uncovering secrets and making choices about the story along the way.

Down The Rabbit Hole is a new PSVR Title, even though PC VR had it slightly earlier. It’s a new take on Alice and Wonderland, but you are literally in Wonderland. I’m always up for an adventure, so I thought this could be a good time. After playing it, was I left mad as a hatter? Let’s find out!

As I always do with PlayStation VR titles, I like to talk about the controllers needed to play the game due to the different potential configurations for each virtual reality release on Sony’s console. For Down the Rabbit Hole, things are pretty easy, since you just need your DualShock 4, as there’s no need for using a PlayStation Move controller or any other peripherals. 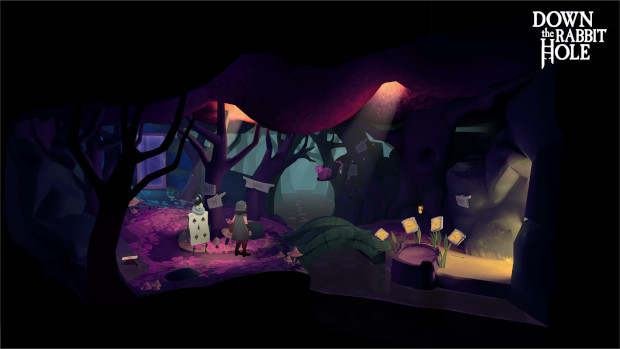 Down The Rabbit Hole tells the story of Wonderland pre-Alice. You play as a girl who falls down the rabbit hole in search of her missing cat and sets out on an adventure through Wonderland to find it. Along the way, you are going to meet many of the staple Wonderland characters, such as the Cheshire Cat, the Caterpillar, the card soldiers, and more.

The game switches between a third-person view and a first-person view for puzzle solving. I thought it would be jarring at first, but it actually worked pretty seamlessly. All of the third-person sections are set in a diorama like Moss, and it also controls very similarly, with you moving your character around the screen through doors and such. One thing I really liked was grabbing the world and pulling myself closer into it, almost like shoving my head into the game. It let me get right up close to the action. It wasn’t used enough, but the game is a short experience that should last you around 2-3 hours, with an extra hour or so to get 100% completion. 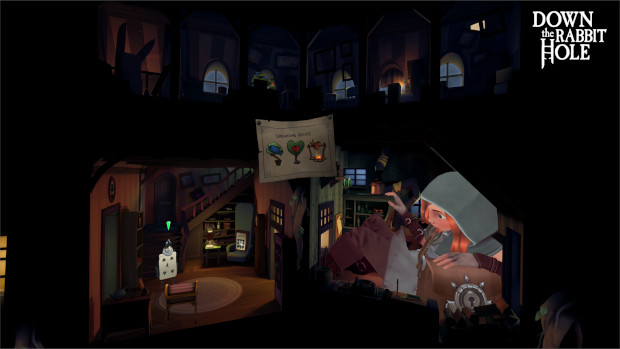 When you go into a first-person view, you will usually be solving puzzles. None are too hard, which is good since it helps to keep things fresh without getting in the way of progressing through the game’s story. I’m not sure if I found them easy due to my experience with solving puzzles, or if they were actually easy. I don’t think anyone will get stuck on them for too long.

I really enjoyed running through Wonderland, since it’s a really interesting world with such unique and vibrant characters. Since it’s based on a classic, you instantly know how each character you meet will be like. All of the voice actings were really good as well, which I really appreciated since it’s a department that sometimes suffers a bit in short PlayStation VR experiences. 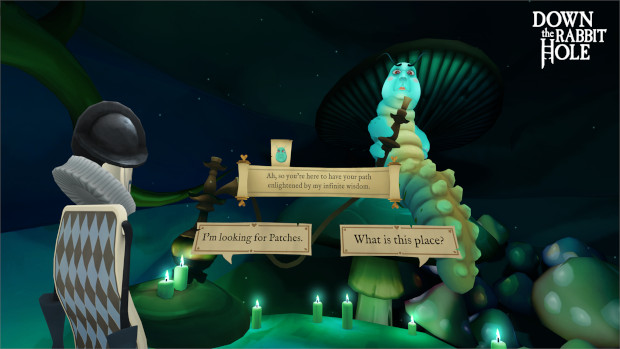 Down The Rabbit Hole is a short virtual reality experience, but it’s an easy one to recommend since it offers a fun time on Sony’s VR hardware. You get to run around Wonderland looking for your missing cat, meeting lots of cool characters. The puzzles are fun, and none are too obtuse, so you won’t ever be stuck for too long. I liked my time spent in Wonderland, and I look forward to seeing what the team does next.

Disclaimer
This Down the Rabbit Hole review is based on a PlayStation VR copy provided by
CORTOPIA AB..