Need a Packet? from Sometimes You is a bizarre horror game on PlayStation Vita about a cashier slowly going crazy in a world gone mad. Learn more in our Need a Packet? Review!


In Need a Packet? from Sometimes You, you’ll be taking on the role of a supermarket cashier who has started to go a bit crazy during a time in which a lot of weird stuff is happening in the city. Your journey will begin as you get dressed and ready to go to your first day of work. During your commute, you’ll be able to check your phone for any important news, check messages, view videos, as well as make any purchases with your hard-earned money to get stuff such as more furniture, or even help the city by lowering the overall pollution. 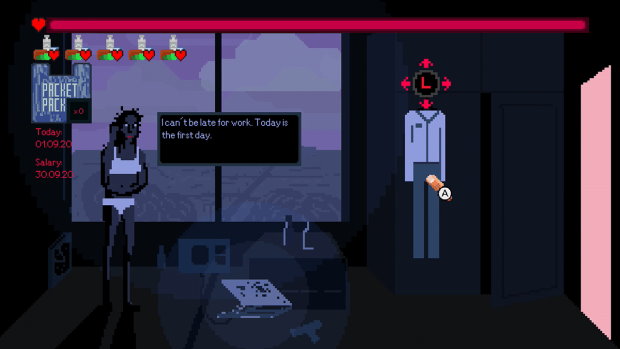 That last part is important because as you play Need a Packet? a big garbage crisis will hit the city, polluting the air and poisoning the water along the way. Your actions will have an effect on all of this since as you ring up customers and scan their goods before collecting payment, you will always ask the customer if they need a packet. Some of them will say no, and off they’ll go with their – hopefully merry – life. But some of them will need one, and the more packets you sell, the more polluted the city will be!

Oh, and then the monotony of routine will start to affect you as you take on the same task over and over again, and your commute to work will start to get a bit weirder, with a bus that seems to always be running into trouble during segments that feel a bit like a shoot ‘em up in which you don’t get to attack, and a cash register that will suddenly turn into a medieval setting with monsters and dragons and whatnots, so you’ll have to boost your defenses to take on a minimalist tower defense-style segment, along with still having to ring up your customers. And in the real world – what is real? – people are now going missing in the local forest, which is a bit too weird and unexpected. 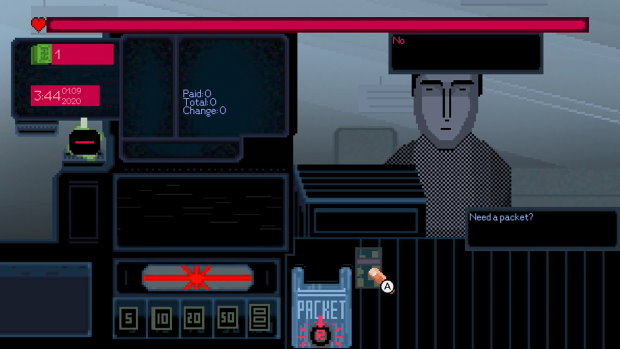 On the “work as a cashier to pay the bills” side of things, it will all start very easy since you’ll only need to scan items and collect payment, but as you progress through the many days you’ll be working as a cashier, you’ll need to pay attention to more stuff and take care of more actions. You will need to start inputting numbers for fruits and vegetables, and a few days later, bread will be thrown into the mix. You need to check how much someone has to pay for all of their groceries because some will try to stiff you and will give you less money.

There’s the option for first doing a run in Easy mode, which I suggest you do. This will allow you to learn most of the basics for your subsequent Normal runs – things such as scanning items, using codes for fruits, vegetables, and bread, interacting with stuff around your apartment, using your phone during your commute, and selling packets to customers. Once you’ve done one run on Easy – which will probably net you a handful of trophies – you’ll be ready to take on a run on Normal, with all its craziness. 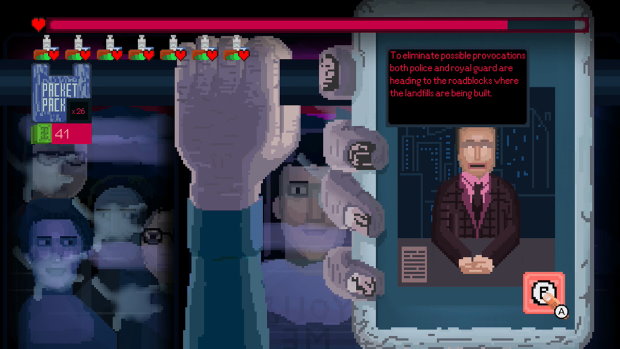 Speaking of trophies, Need a Packet? has a full trophy list with a Platinum trophy waiting for you. You won’t be able to get all trophies during a single run since there is one trophy in particular that can’t be combined with the other two, as far as endings are concerned. You see, there’s an ending for completing the game after selling more than 30 packets, another ending for completing the game after selling 15 to 29 packets, and one for selling less than 15 packets. The good news is that all in all, it should take you 3-4 hours at most to get all of the trophies.

Since you’ll be heavily penalized when you don’t sell a packet to three clients that request them during a single day, you won’t have enough money to survive the tower defense battles when going for the Deadly Polluted (sell 30 packets or more) or Polluted (sell 15 to 29 packets) endings. The other trophies will be for buying extra defenders for the tower defense segments, for purchasing extra stuff for your home, for having 30, 60, and 90 money on you at once, and for serving 50 and 100 customers, to name some examples. 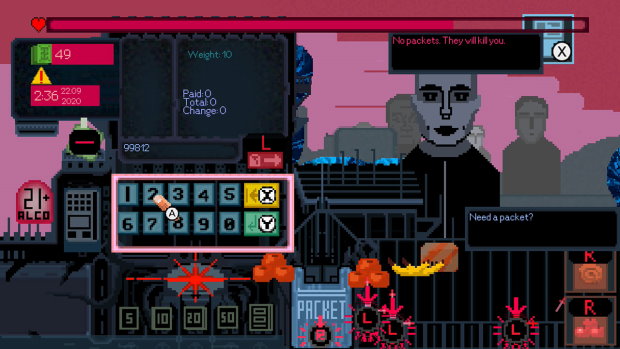 Need a Packet? is a bizarre experience that is not going to be for everyone. The mix of a convenience store sim, a mild bullet hell, and a bite-sized tower defense segment means that the game can end up feeling like a jack of all trades, master of none. Need a Packet? is out now on PlayStation 4 and PlayStation Vita for a low $6.99 asking price. The game is not a cross-buy release, so you’ll need to purchase each version separately, but each version does feature a separate trophy list for you to work on.

Disclaimer
This Need a Packet? review is based on a PlayStation Vita copy provided by Sometimes You.