Skater XL by Easy Day Studios is a skateboarding game that takes a more realistic approach to the genre. Find out if the wait was worth it in our Skater XL review!


Skater XL is the evolution of skateboarding games and moves the genre towards expressive, physics-based gameplay.

As soon as you start the game, you are presented with a few tutorial lessons to learn the basics of the game. The left analog stick controls your left foot, and the right one is, as you can probably guess, for the right foot. If you pull the analog stick of your back foot down, it will put your weight on the back of the board, and once you release it, you’ll pop up and do an ollie. If you instead push your front foot, the weight will be in front, and releasing will have you do a nollie. The L2 and R2 buttons allow you to spin left or right, whether you’re just moving forward or when you’re in the air in the middle of a trick.

You also get a few tutorial lessons that explain how you’ll be able to do the tricks. For example, going into the air doing an ollie and then moving your front foot to either side will result in a kickflip. From there, you’ll quickly understand that the moves you do are all a matter of moving your feet, just like skaters would do to pull off tricks in real life. There are no magic button combinations to do tricks like in that other skateboarding game, just your feet and your body movement.


When you’re ready to hit the road, you’ll have the choice between five official maps, as well as some community maps. As of writing this review, there are three community maps available. When you appear on the map, you are in Free Roam Mode, where you can explore and try to do tricks on pretty much anything. You’ll also have access to challenges in each of those maps. Not just a few challenges, but a ton of them! They are separated in multiple categories, from basic ollies over small obstacles to more advanced tricks that will require grinds and manuals. 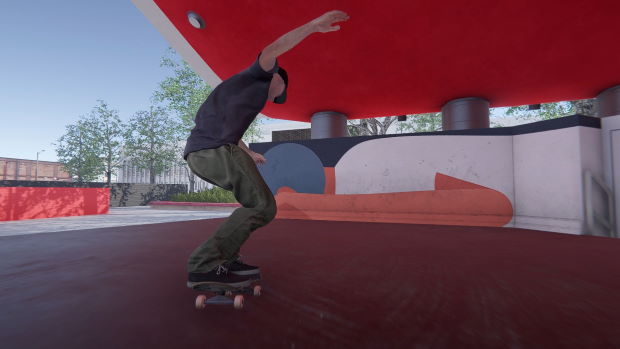 The game features some nice looking maps and characters. It’s not on par with some of the big AAA titles out there, but it does showcase some nice details on its locations. You also have the option of customizing your character with a wide variety of changes to its looks, from clothes and hair, all the way to the wheels and deck of your skateboard. I ended up mostly keeping the default looks, since browsing the different options wasn’t a smooth experience. There was a short loading between each change, so trying out over twenty shirts quickly became an annoying experience.

Way back in the day, my Tony Hawk Pro Skater 2 disc ended up all scratched because of how much I played it, and I’ve always loved that series, so I was definitely up for trying a new skateboarding game. As soon as I completed the tutorials, I knew I was in for a different experience. I thought it would be more challenging since there would be many crazy tricks to pull and probably some collectibles to find in each stage, all while taking on a totally different control scheme than what I was used to.

I was sent into the free roam after selecting a map, with no indication of what to do. While a free roam can be great, it’s fun when there are specific objectives to complete, so this one felt a bit more like a sandbox option. I then found out about the challenges when looking through the menu, so I started to take on the list. They featured some good explanations with an overlay of the controller to show you how it’s done, so it was easy to pick up the moves and learn your tricks.


As for the trophies, the list is relatively easy with a bunch of miscellaneous trophies that are self-explanatory, but there is one trophy that will get in the way of that shiny Platinum. The trophy is for traveling for a total of 40,075 kilometers, which is a ridiculously long grind. With the lack of extra things to do other than the challenges and riding around in free roam, getting that trophy will likely end up being way too tedious of an experience for a lot of you.


Skater XL could have been a great skateboarding experience that’s totally different than what we’re used to out of entries in this particular genre. In that aspect, the game delivers, as doing tricks becomes a unique experience that’s tricky to pull off. But other than that, the game felt more like an incomplete sandbox mode with not many things to do.

Disclaimer
This Skater XL review is based on a PlayStation 4 copy provided by Easy Day Studios.