In Prehistoric Dude from Ratalaika Games and lightUp you will play as the titular Dude who very much lives in prehistoric times. He loves ham, and one day while he was preparing to take a big bite out of a juicy piece, a huge dinosaur steals his lunch! It’s up to you to help Dude recover his succulent piece of ham as you play through a bite-sized Metroidvania that will take you through three different sectors as you try to stay alive, avoiding the different enemies – and bosses – you will face, as well as the hazards on your path. 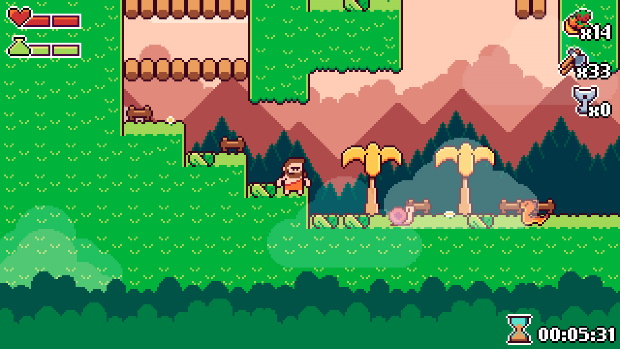 This is a bite-sized Metroidvania game, so you’ll be moving Dude around with the left analog stick or the D-Pad, jumping with the X button. You won’t have a weapon when you start your adventure, so you’ll have to search around each area you explore to collect items that will pop out of the bushes after you walk through them. These items include food that will allow you to recover some of the health you’ve lost, fruit that can be used to pay for specific doors in the game to open, or the very useful axes you can throw at enemies with the Square button. Once you gain access to a club, you’ll be able to use melee attacks with the Circle button.


Since this is a Metroidvania, you will gain items that will open up new areas for you to explore. The first one of these will be a pair of Mountaineer Gloves, which will allow you to grab to ledges so that you can get to hard to reach places. The second one will be the club that will allow you to use a melee attack. You can also find a Tonic of Fortitude, and this particular concoction will make it possible for you to push large rocks. These rocks can be used as a stepping stone, or to activate floor switches. 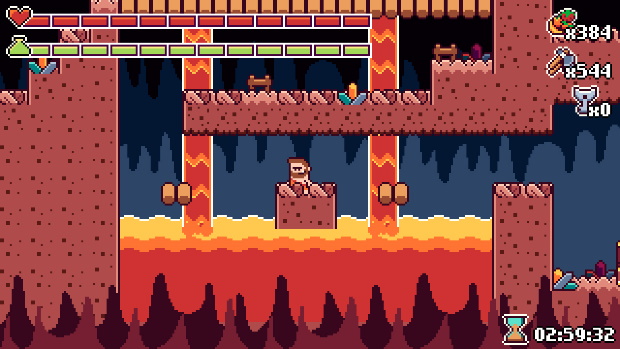 You will start the game with two hit points and two stamina points. Hit points are what will keep Dude alive, and he will lose one with every attack that an enemy lands. Stamina will be used for activities such as using your melee attack – once you’ve unlocked it. Because of this, you should search for the special items that will increase your overall hit points, as well as the ones that will increase your total stamina. They will certainly come in handy when you battle the bosses in the game since you’ll be able to take more damage before you’re defeated. 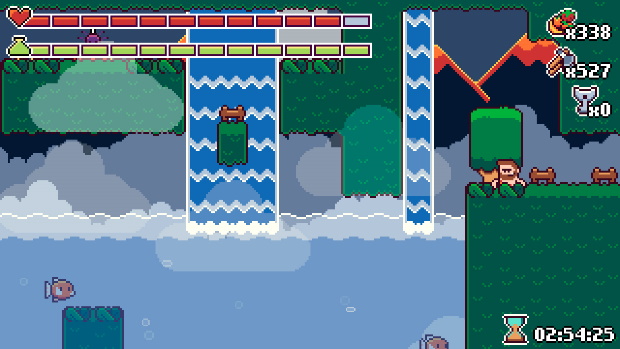 Since Prehistoric Dude is a Ratalaika Games release, that means trophy hunters can look forward to a full trophy list with a Platinum trophy to add to their collection. It’s a short list since it includes eleven Gold trophies and a lonely Silver trophy to unlock. The trophies are tied to collecting a handful of the of items that grant new abilities, the ones that increase your hit points and stamina points, for defeating the first two bosses in the game, for collecting your first silver key, for opening your first treasure chest, for using a lever, and for spending 100 pieces of fruit to open a door. 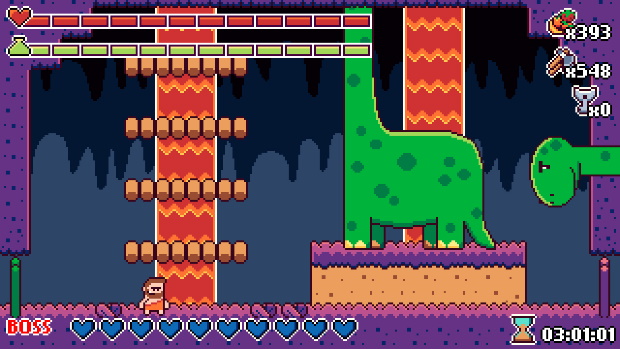 If you’re a fan of Metroidvania games and are looking for a short, bite-sized 2D adventure to take on, then Prehistoric Dude is a good option to scratch that itch. It has a minimalist presentation, a bit of a linear experience, and a Platinum trophy for you to add to your collection. It’s a budget release with a low $4.99 asking price, and it’s out now on PlayStation 4.

Disclaimer
This Prehistoric Dude review is based on a PlayStation 4 copy provided by Ratalaika Games.

Ben 10: Power Trip Out Next Week