Are you ready to crush the EDM empire and rock as hard as you possibly can on PlayStation 4? Then check out No Straight Roads review!


In No Straight Roads from Metronomik and Sold Out, you will play as guitarist Mayday and drummer Zuke., who together are Bunk Bed Junction. You’ll be at the Lights Up contest, a reality TV show in which you will try to convince everyone about the power of rock. Your journey will start during the audition process. After you tape your introduction, you will rush towards the arena where you will try to do your best to impress your judges with the might of the chugging guitar, the powerful power of the power cord, and the primal rage of a beat. 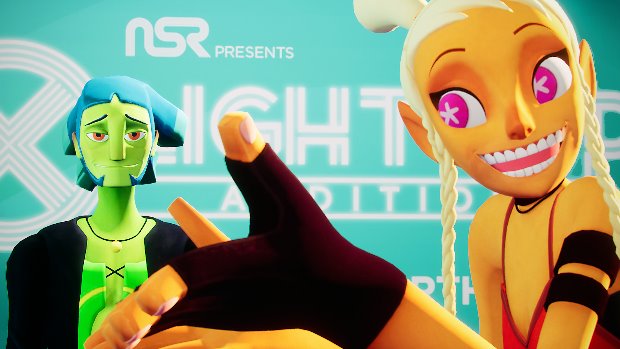 When I started to play the game, I got to think about other projects such as Jet Set Radio, Psychonauts, and virtual band Gorillaz. This was probably triggered in my mind due to the game’s colorful presentation, great soundtrack, the art direction for No Straight Roads, the interesting premise, the game’s humor, and the larger than life bosses that you’ll be battling as you progress through this fun adventure. What games were you reminded of after watching the above trailer for No Straight Roads?

You live in Vinyl City, and NSR is responsible for using the power of music to transform it into energy in order to power the city. It’s because of this that more and more musicians are being scouted to be recruited into the cause so that the colorful city can continue to be powered, day and night. Even though your audition went great and your music managed to almost fully power the Qwasa, the judges voted against you. To make matters worse, main judge Tatiana issues a statement saying that rock is banned from all future auditions, which is why artists should stick to what works best: EDM.


After the audition, knowing that they gave it their best shot and that something is certainly a bit fishy, Mayday and Zuke stand on the edge of the city, as Zuke comments on how, sure, NSR might be crooks, but at least they’re doing a great job governing the city and providing energy to everyone. Then something weird happens: the lights go out for the entire city! When the emergency generators kick in, Mayday and Zuke realize that only the elite NSR members benefit from this, while the rest of the city remains in darkness. 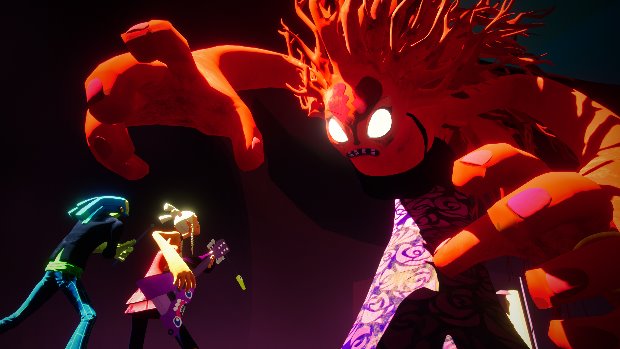 The game will send you down into a short platforming tutorial segment right from the start before you can enter the arena, where you’ll learn more about the basics for No Straight Roads. You’ll run with the left analog stick, jumping with the X button. If you want to do a roll, you can do so with the Circle button. You can attack enemies on the ground with the Square button. If you jump and then press the Square button, you will do a ground pound attack. For enemies that are out of your reach – which are marked with a thin white frame – you’ll have to pick up ammo so that you can shoot at them R1 button. If you find something you can interact with, you can transform it with the Triangle button, which will prove to be useful towards achieving your goals.

You can play No Straight Roads on your own, or have another player join in on the fun. If you’re enjoying this one in single-player mode, then you’ll be able to switch between Mayday and Zuke by pressing the L1 button. When switching between characters, the one that is inactive will get a chance to take a step back and relax as it recovers some of its lost health. While May is the heavy hitter of the band, Zuke will feel like a more agile character who can make combo attacks to mix things up. 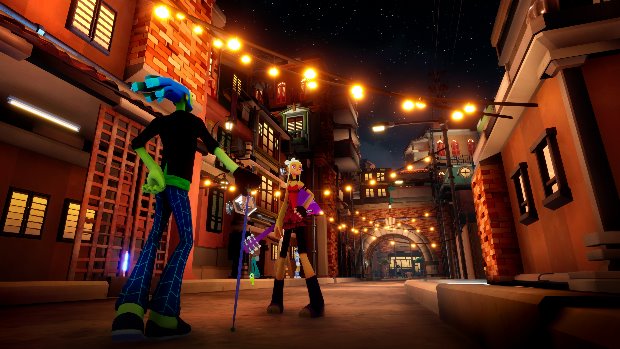 While taking on the enemies the game will throw at you, you must remember that everything in No Straight Roads is directly tied to music. Enemies will move and attack in tune with the beat, and not all enemies will attack on the same note, so you’ll have to pay attention so that you can establish what their patterns are. Oh, and before I forget. When fighting, both characters can parry an attack by pressing the Square button at the right time, as long as said attack is purple. You could decide to roll away from an attack to protect your characters since parrying is optional, but if you do decide to give parrying a try, you will deflect that attack and send it back towards your opponent, dealing some extra damage in the process.


Boss battles really stand out in No Straight Roads, with their huge, larger than life nature. You’ll need to pay attention to their movement and attack pattern so that you can find their tells – along with the musical cues – so that you can find the right window for you to attack them back. At the end of a boss battle, you will see a tally of your overall performance. You will receive a boost to your score based on the time it took you to win the battle, how much damage you took, how big of a combo you managed to secure, as well as how good you were in using the attack parry system. If you do things right, you will also win a bunch of fans in the process!

While exploring Vinyl City, you will run into energy cells, called mini Qwasa, that can be used to power up mini Qwasa devices. The bigger the pack or cells, the more you’ll be able to add to your overall count. Activating mini Qwasa devices will be something that will please your fans, which will, in turn, allow you to unlock more things in the skill tree. The people of Vinyl City will be very grateful for your help, what with the huge blackout in the city that has affected the energy distribution in each district. I do wonder what will happen once all mini Qwasa devices for a district are activated? 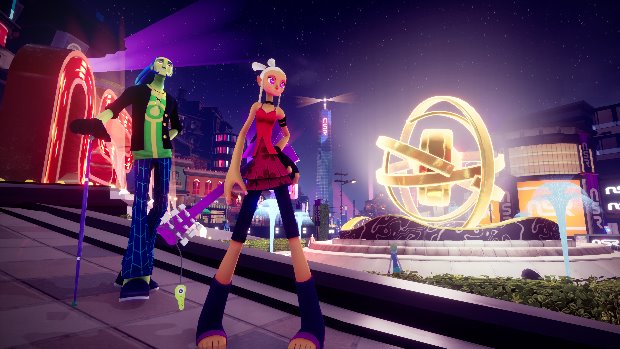 There are going to be skill trees for Mayday, Zuke, and Bunk Bed Junction, so you’ll have to decide how you want to proceed as far as unlocking new skills is concerned. For example, you could focus on powering up Mayday first, adding a finisher attack to her arsenal, and increasing her total ammo count. You could also decide to work on increasing Zuke’s overall combo so that he can dish out more hits. Or maybe, just maybe, you should first unlock the double jump for both characters at the Bunk Bed Junction skill tree so that you can explore previously out of reach spots, which will allow you to find more mini Qwada and more stickers.


The stickers you can collect – to add to your instruments – will be split into different types, as well as come in three different level variations. The higher the level, the more powerful a sticker will be! You can find stickers to boost health, melee damage, shoot damage, movement speed, transformation speed, combo finisher damage, special move effectiveness, and parry radius. Stickers offer temporary boosts, so they will only last for a specific number of boss battles. Stickers can be placed on Mayday’s guitar and Zuke’s drumsticks at Zuke’s Workshop. While there, you’ll also be able to equip Mods. Mods are special moves you will add to your arsenal after defeating each of the NSR artists. These are mapped to the L2 and R2 buttons so that you can put them to good use. When you activate them, you will consume one segment of your energy bar. To fill up the bar, collect energy items, or attack your enemies with all your might. 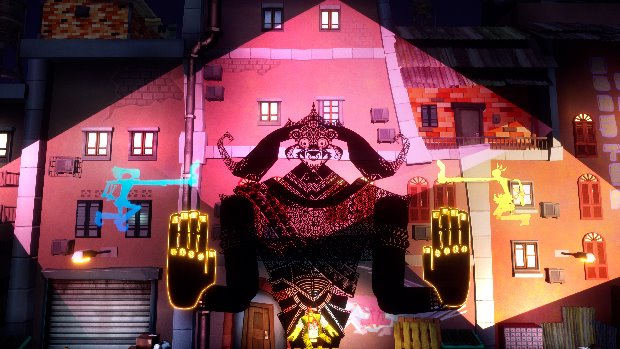 I enjoyed my time with No Straight Roads. It has a slow start with the mandatory tutorial section, but once you’re done with that – and right after the citywide blackout – you’re in for a treat. I loved the game’s look and feel, the boss battles, the funny dialogue, the music, and the whole premise. The one complaint I have is that sometimes the game’s camera goes a bit crazy, but that’s about it. It’s one of those games you start playing, and before you know it, it’s way too late at night, and you should have gone to bed earlier, but you just couldn’t stop playing just to see what the game throws at you next. No Straight Roads is out now on PlayStation 4 with a $39.99 asking price.

Disclaimer
This No Straight Roads review is based on a PlayStation 4 copy provided by Sold out.