Are you ready for some colorful jet ski racing on PlayStation 4? Then come check out our Kandagawa Jet Girls review!


Kandagawa Jet Girls on PlayStation 4 is a video game take on the still relatively recent anime series of the same name, which got its start in late 2019. There was an OVA released in early 2020 as well, and it’s from that property that this new video game has burst into action. If you’re getting a Senran Kagura vibe after watching the game’s launch trailer, you’re not alone. This is intentional since Kenichiro Takaki, the producer for the Senran Kagura franchise, is also working on Kandagawa Jet Girls. If you’re a fan of the series, and want more on top of Ryobi & Ryona, you can even get a character season pass to add a bunch of Senran Kagura characters to Kandagawa Jet Girls, or get them as separate teams a la carte.

When you start Kandagawa Jet Girls, you will have the Story Mode, which is fully voice acted in Japanese and will feature many interactions between the different characters you will meet on your journey to becoming the best jet machine racer you can be. There’s also Free Mode and Online Mode, which unlock after you’ve progressed a bit in Story Mode. Free Mode allows you to race based on the settings you select, as well as offering the chance to take on some time attack runs. Online Mode, as the name suggests, gives you the chance to take the racing online so that you can play against players from around the world.

Before you jump into the Story Mode for Kandagawa Jet Girls, you should take the chance to try out the game’s tutorial so that you can learn the basics. You’ll ve steering your jet machine with the left analog stick, accelerating with the R2 button, and slowing down by braking with the L2 button. You can also go in reverse if you keep pressing the L2 button. You can lower or raise the nose of your jet machine by pressing down or up on the left analog stick, which will affect your overall speed, as well as how hard it is to turn. Drifting is an important technique to keep in mind. While moving, tilt the left analog stick left or right and tap the L2 button to start drifting. As you do this, you will build up your drift gauge, which will increase up to three levels. The higher the level of your drift gauge, the bigger the drift boost you will get when you stop drifting. 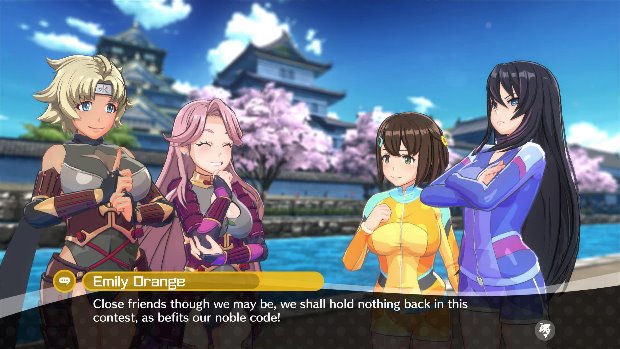 Depending on your performance during a race, your EPD Gauge will start to fill up. Once it goes past 20%, you can press the X button to activate a boost. This will greatly increase your speed, which could be just what you need to claim victory during the final leg of a race. Speed is important since it will allow you to gain enough momentum to use a jump ramp to launch into the air. When jumping, you can use the left and right analog sticks to perform tricks, as well as to stick your landing. All characters will have the same base tricks to perform, as well as a special trick that will be determined by the shooter character of the pair.


Speaking of that, allow me to elaborate for a but. In Kandagawa Jet Girls, each pair of racers will consist of a jetter and a shooter. The jetter is the one doing the driving, moving the jet machine around each course that the game has to offer. The shooter will be using its weapon to try and damage opponents. Shooters will start with an assault rifle, which you can fire with the Circle button. When a shooter runs out of ammo, it will automatically reload, and you won’t be able to use it until you have a fully loaded gun.

As you race, you can collect item boxes, which will grant you one of eight potential weapons. These include dual handguns, a shotgun, a gatling gun, a sniper rifle, grenades, a mine, the bound ball, and even a missile launcher. When you have an item on you, pressing the Square button will allow you to change into shooter mode. When in shooter mode, your character will aim its attacks at nearby jet machines, which means you can use it to attack enemies ahead of you, as well as those behind you. While doing all this, the jetter character will drive automatically. Each weapon has its own strengths and weaknesses, so be sure to try them all! 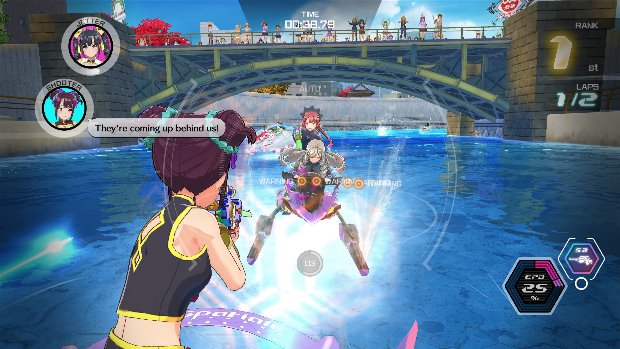 If you fill up your EPD gauge, you can decide to press the Triangle button to use up all of it to unleash a special technique. These are tied to the weapon you have in your possession at the time of activating the special technique. You could get a super shield, activate a water tornado, launch multi mini-missiles, release a lighting impact, use a satellite water laser, and more. If you have not collected a weapon item, then you’ll use a ninth, separate special technique.

As you play through the Story Mode, you will notice there are different sets of missions that you can complete. These include objectives such as finishing a race in first place, using your weapons X number of times, using more than one type of weapon during a race, using Y number of tricks in a race or using a variety of tricks while riding around a track, to name some examples.

Jet machines will have shields for some extra protection. A shield can take some hits from enemy attacks before it deteriorates. You will know what its overall charge is depending on its color. If a shield takes too many hits, it will break, which will have an impact on your overall speed. At least there is some good news since after this happens, you will be invincible while the shield charges up. You can speed up the shield recovery process with some of the machine parts for your vehicle, as well as by picking up shield recovery items. 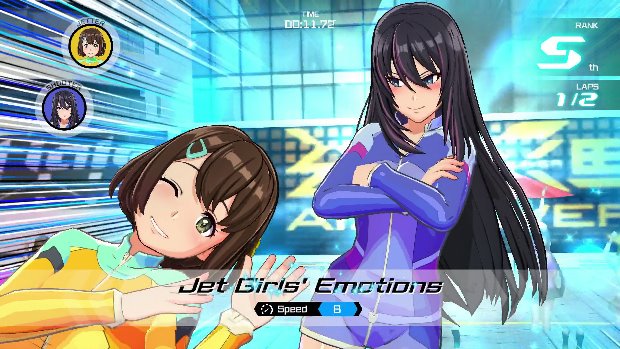 On top of the game’s story mode, there’s also the Kandagawa Jet Girls Clubroom for you to visit. At the Kandagawa Jet Girls Clubroom, you’re given a chance to customize your character’s look at the Dressing Room, customize your jet machine at the Garage, purchase items at the Shop, obtain points from playing minigames at the Extracurriculars section, or check out the unlocked movies and illustrations at the Club Journal.

At the Dressing Room, you can change a character’s costume, hairstyle, hair color, eye color, eyebrow color, skin tone, add accessories to a character’s head, body, left and right arms and legs. You will have an equipment limit, so be sure to check the equipment cost for each item! At the Garage, you’ll be able to work on your jet machine by adding parts to the E.P. Drive, Steering, Battery, F.C.S., and Special. These can have an effect on your jet machine’s speed, acceleration, and handling. You can also change the colors for the different sections of your jet machine, change its skins, add decals, and change the effects for drift, line, and trail.


At the Shop, you’ll be able to use the points you’ve obtained to purchase new costumes – from the available uniforms, suits, and other attires – hairstyles, and accessories for your character’s head, body, arms, and legs. You can also buy machine parts, skins, decals, and effects for your jet machine. There will be pics and movies for you to obtain in exchange for points, as well as different background music tracks for the Clubroom, and sets of digital stickers. 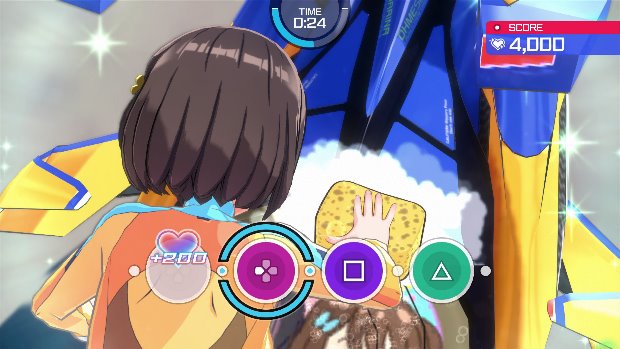 The Extracurriculars section has four minigames for you to take on: Jet Machine Cleaning, Mopping, Treadmill Run, and Aerials. For Jet Machine Cleaning, you will take care of washing the jet machine to make it shine. You will have to quickly press the buttons that pop-up on the screen, and depending on the difficulty setting, more buttons will be considered for this. In Easy, you only have to worry about the Square, Circle, X, and Triangle buttons. In Normal, the four directions of the D-Pad are added. If you play it in Hard, the L1 and R1 buttons are added into the mix. Don’t make any mistakes, and you will enter Fever Mode so that you can mash the button displayed on the screen to gain a considerable boost to your score.

Mopping will require you to use the left analog stick to guide your character as she mops the deck. You need to focus on mopping up the puddles of water as you stay away from the cones. Hit a cone, and you will lose time, and your combo will be reset. Get a high enough combo, and you will go into Fever Mode, which will stop the clock, allowing you to hit cones without losing speed or your combo. In fact, if you hit cones while in Fever Mode, they will add up to your points total!

In the Treadmill Run minigame, you must do your best to catch all the flying hearts while adjusting your speed to match the treadmill’s speed. You can mash the Square button to speed up, or slowly press it to slow down. There are three types of hearts to catch, and the points you get will depend on if you grab a low, normal, or high heart. You can also enter Fever Mode in this minigame by catching a star. In Fever Mode, the timer stops, and you can’t fall off the treadmill, so make the most of it and grab as many hearts as possible!


The last minigame in the Clubroom’s Extracurriculars section is Aerials. In the Aerials minigame, you must help your character perform tricks on its jet machine while using the jump ramps in the course. The wider the variety in the tricks you perform, the more hearts you will earn. You will also obtain hearts by passing through the rings in the course. Fever Mode in the Aerials minigame is activated by going through a rainbow ring. As has been the case for the other minigames, the timer will stop when in Fever Move, and the hearts you gain will be worth twice as many points. To perform tricks, you will need to tilt the left and right analog sticks in different directions after a jump. 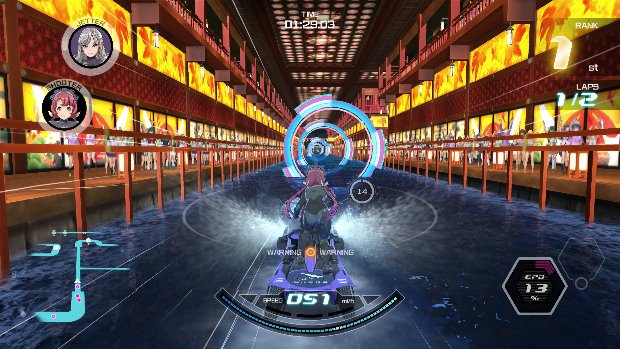 Kandagawa Jet Girls is a fun and colorful racing game that will certainly please fans of Marvelous’ Senran Kagura series. The game is fully voice acted in Japanese, with a lot of dialogue for the game’s Story Mode. It has easy to understand gameplay mechanics, lots of customization options for characters and jet machines, and a solid presentation that, as expected, does lean a bit into fanservice territory, which might rub some people the wrong way. Kamndagawa Jet Girls is out now on PlayStation 4 with a $49.99 price tag.

Disclaimer
This Kandagawa Jet Girls review is based on a PlayStation 4 copy provided by Marvelous Europe.