It’s been a while since Headbang Club announced Double Kick Heroes. Along the way, the game set course for the Nintendo Switch, and co-publisher Hound Picked Games and Plug In Digital also joined in on the fun. As for the game, the mix of great pixel art, fun rhythm-game/shooter gameplay mechanics, and what was shaping up to be a killer soundtrack made me look forward to playing the final release version. The wait is almost over, because Double Kick Heroes is out on Nintendo Switch on August 13, and if you like what you’ll learn in this review, you can jump right in an pre-purchase the game by clicking right here, so that you’re ready to play right away on launch day. 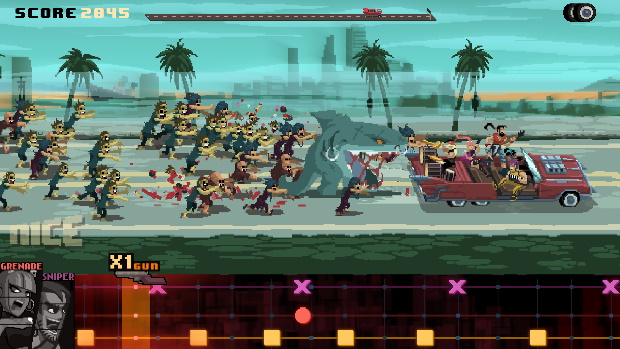 Double Kick Heroes is definitely very different from other games that Hound Picked Games has helped release, such as 2D action platformer/Metroidvania Battle Princess Madelyn, or charming visual novel/point and click adventure NAIRI: Tower of Shirin, although it does have a vibe that did remind me a bit of the 1980s-infused HyperParasite. For Double Kick Heroes, things are a more grim than usual, since it’s the end of the world as we know it, but at least metal has survived and is still very much alive and well!


There are four different gameplay modes for you to take on. There’s Arcade, which puts you right into the action without any of the “boring details.” Story will allow you to take on the game’s full story arc as you follow the characters’ journey into hell. Hellgate is a special mode in which you’ll be taking on a bunch of zombies to the beat of the songs from guest musicians. The last one is Road Fury, which offers a Daily Fury run that all players can enjoy, or go for an Endless Rage as you try to play for as long as possible. 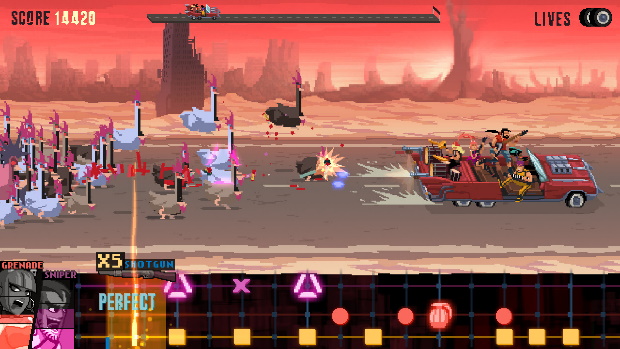 Each of these gameplay modes can be taken on by playing in one of five different difficulty settings: Rock, Hard Rock, Metal (which is the default setting), Violence, and Extreme. Rock is the easy one since it will have a single track with kick drums, fewer notes, and fewer monsters. Hard Rock moves things to one or two tracks and has kicks, snare or cymbals, as well as a gun combo. Metal is the standard option, and the gun combo will reset if you make a mistake. Violence has two tracks at all times, so you’ll need to start to really get good at it. Extreme has three tracks, which means that any mistakes will cost you, but you’ll get to prove to everyone you’re really as good as you think you are – or fail miserably while trying.


As for how the game controls, there are plenty of options! You can go with a button-based approach by using the L or Y button for grenades, the R or X button for the sniper, and the A and B buttons to shoot up or down, respectively. There’s also the trigger-based option, with shoot down and up set to the L and R buttons, grenades mapped to the ZL and ZR buttons, and the sniper on the A and B buttons. But after that, you have a lot of variety by adding in motion controls here and there!

Once you separate the Nintendo Switch Joy-Con from the console – and connect the Joy-Con Straps to the Joy-Con controllers for some much-needed extra protection -, you’ll get to choose if you want to use the motion controls of the Joy-Con to beat the kick drum, use motion controls so that the left Joy-Con shoots down, the right Joy-Con shoots up, grenades are sent by flicking the right Joy-Con forward or by pressing the L button, or activate the sniper with the R button. You can also change it so that the Joy-Con are used for beating the drums to shoot down with the left one and up with the right one, with everything else mapped to the L, R, ZL, and ZR buttons.


The options menu will allow you to make some changes to tailor the overall experience to your entertainment needs. Along with getting to change the game’s language and the dialogue speed, and you can turn off screen shake and bright flashing lights, in case one, the other, or both, might affect you. And then, things start to get a bit different. The sound can be dialed all the way up to 11 – because of course it can – but you can also change if that will apply to the general volume, the game’s SFX, notifications, the music volume, the cymbals, snare, and kick tracks, or the main track. 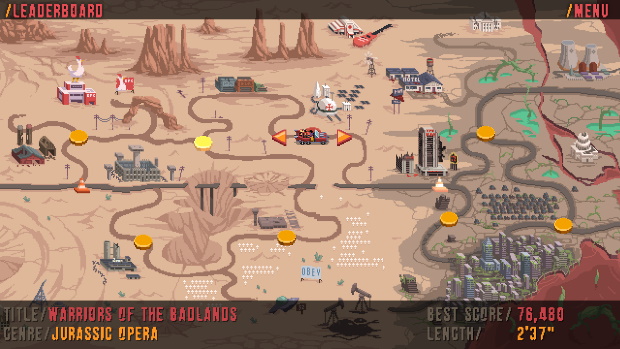 There’s also the possibility of changing instrument feedback between playback, quantized samples, or samples, enable snare/cymbals input merge, turn auto-steering on so that the car moves itself as you score good notes during steering levels, activate chill mode which, as its name suggests, will allow you to relax since there are no monsters so that you can just enjoy the ride as you rock out, remove overheat, or add a metronome so that you can keep in time with the beat. Oh, and you can change the musical score speed.

Double Kick Heroes includes an in-game Achievements system – since the system has no centralized trophies or achievements system in place – to complete some extra objectives as you play each of the different modes this one has waiting for you. There are achievements tied to progressing through the game’s Story mode, for defeating each of the game’s bosses in the Hard Rock, Metal, Violence, and Extreme difficulty settings, for scoring 100% of all notes in each of the songs – with the game noting which is the best difficulty in which you’ve done this. It’s a good list that will help to keep you busy for a while. 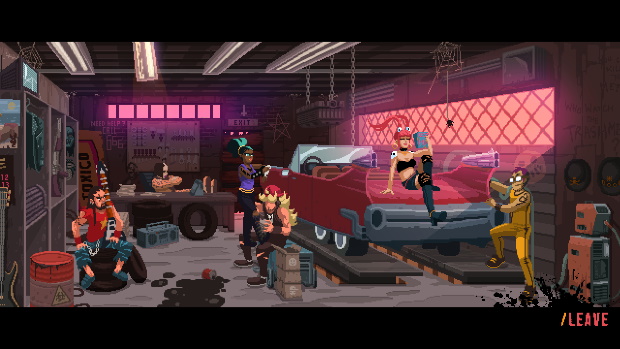 It’s been a long wait for the final version – and you still have a week left of waiting in your immediate future – but Double Kick Heroes is a lot of fun on Nintendo Switch. While the game might seem simple at first when playing it in one of the first two difficulty settings, playing at a lower setting for a bit is a must so that you’re not overwhelmed with having each song playing on three tracks with a ton of monsters to take care of so that they don’t reach your car and destroy it. If you’re a fan of rhythm-based games, shooters, and metal, then this one is tailored for that special Venn diagram intersection – not to mention the many nods to bands and artist such as Marylin Manson, Metallica, and even to movie star Danny Trejo. Double Kick Heroes will be out on Nintendo Switch on August 13 for $21.99, and, as I mentioned before, you can already pre-purchase the game, so that you can play right away on launch day. 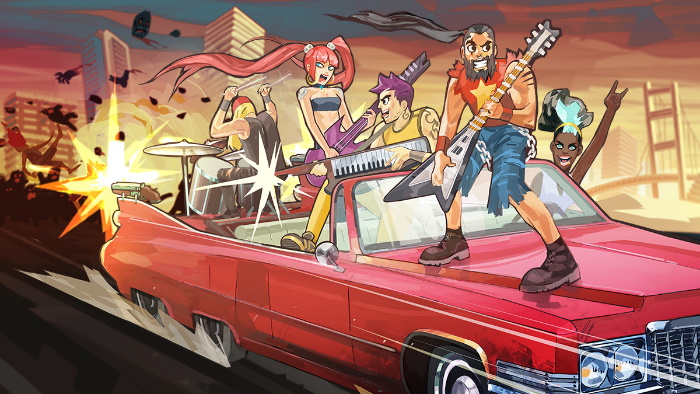 Disclaimer
This Double Kick Heroes review is based on a Nintendo Switch copy provided by Hound Picked Games.

[Beyond PlayStation] Across the Grooves Review