Don the PlayStation VR headset to suit up as the Armored Avenger in an original Iron Man adventure!

Tony Stark has retired from making weapons and instead creates technology used to battle evil as Iron Man. After several years as a world-famous Super Hero, Tony is attacked by the mysterious Ghost, a hacker and anti-corporate activist who repurposes old Stark Industries weapons. In her efforts to topple his empire, Ghost attacks Stark’s corporate locations around the world, leading to ever-escalating stakes and a final showdown.


Last year it was announced during Sony’s first State of Play that we were getting Marvel’s Iron Man VR. It was cool to see, but there were also so many mysteries about how it would turn out. Some thought it would be on rails, while others thought it would be an open-world type of experience as you controlled Iron Man in a wide 3D environment. The game is now out, and as I learned from playing the game for this Iron Man VR review, players get to become Iron Man himself!

I’m not even sure where to start with Marvel’s Iron Man VR. Let’s keep it simple and talk about the flying side of things, which I think is the most important part of the game. When you suit up, it will have your helmet come down and cover your head, and then you’ll get your onscreen HUD. It’s honestly amazing and what I think Tony Stark sees when in the suit on all the MCU films. They somehow found a way to simulate flight as Iron Man using the PS Move controllers, and it feels great! You use your PS Move controllers as the repulsors on the suit, so to fly up, just point them flat as it simulates your open hands facing down. Want to go forward? Place them by your side, and you will be ready to go forward. Hold the PS Move trigger, and you will start flying. Double-tap the triggers to get a big boost in whichever direction your hands are in.

You will need to spend some time getting used to the controls, as they do take some practice before things click, but once they do, you’ll be flying all over the map, quickly racing from waypoint to waypoint, as you take evasive maneuvers when needed. I think the one issue is turning while in flight. There are no sticks on the PS Move wands, which I’m sure you are aware of, so you use the top two face buttons for switching your perspective left and right. I found that when going slower you could use a combination of your head movement and turning the PS Move controllers in your hands to turn, but when I was in races and needed to hit the rings in the air, I would need to stop in mid-air, reorientate, and then thrust off in the direction I needed.

It’s not a deal-breaker, but it does take some time to figure out how to learn to fly effectively. Camouflaj has created a genius flight solution in these games. I would also like to note that somehow Marvel’s Iron Man VR didn’t make me feel sick at any point, which was certainly a pleasant surprise. I haven’t done well with flight or motion games in the past on PlayStation VR, but, for whatever reason of technical wizardry used for this one, you don’t feel motion sickness when flying through the sky. I was honestly amazed by this, as I thought I would be a mess after flying at highspeed inside of the Iron Man suit! 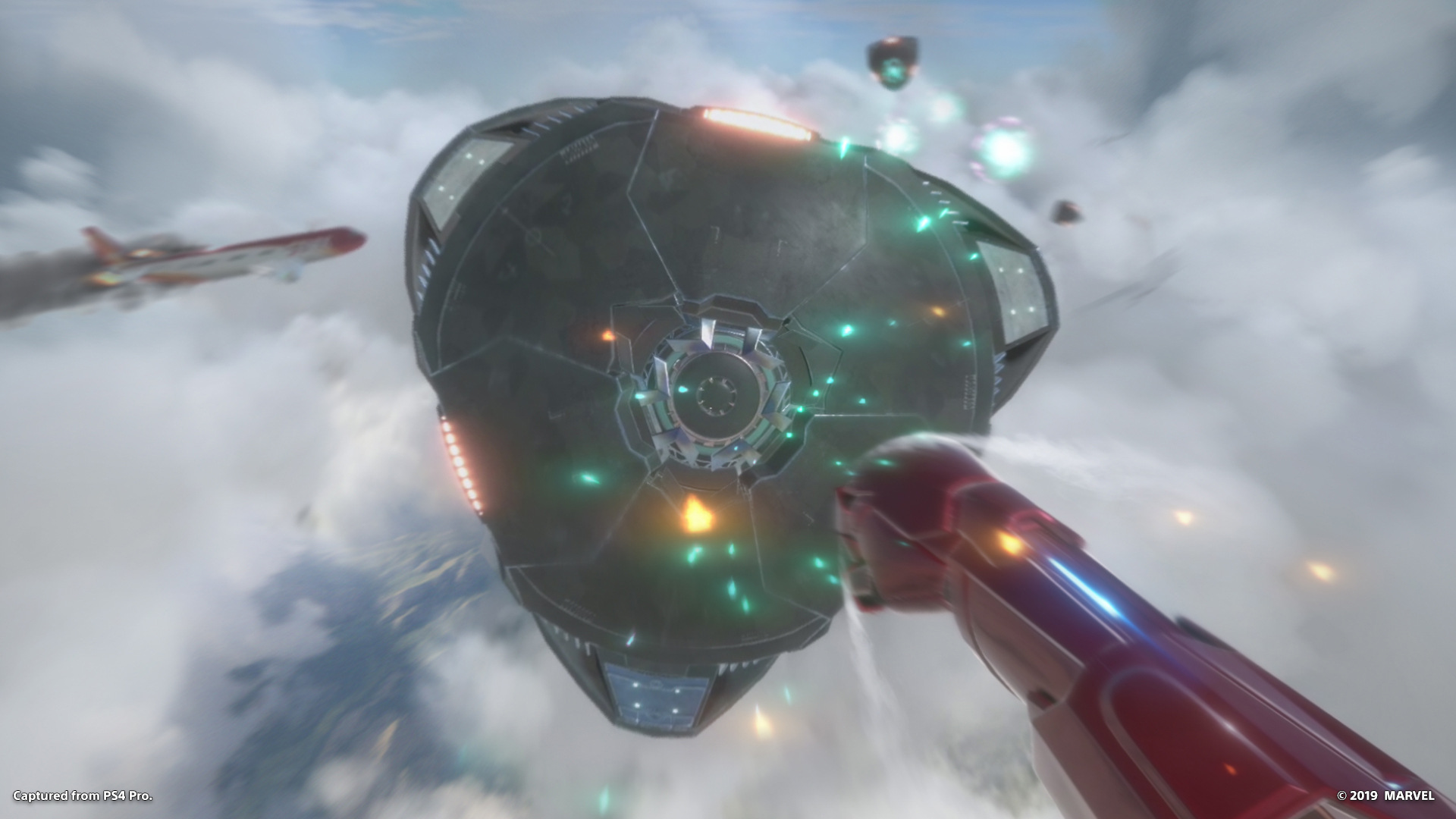 And now, let’s talk about combat in the game. Just like with flight, most of the combat is done using your two hands, without really using the buttons a lot, which is a very intuitive system. Your main form of combat is your repulsor beams, which will shoot out of the palm of your hand. You also have access to auxiliary weapons that you have loaded onto the suit. You can use your fists by pressing a face button and charge it for a dash attack for attacking enemies in the air or on the ground. You also have your Unibeam, which you have to charge during combat. Once triggered, it launches a massive attack on all nearby enemies, so save it for when you need it the most! Your attacks will have a cooldown timer, so you won’t be able to just spam the same attacks over and over again, forcing you to mix things up, which I think is a good thing since it keeps you always engaged and changing your strategy on the go. Since your hands control flying as well as your weapons, you can actually use one hand for flight and the other for combat, shooting while evading enemy fire!


I liked the story of the game since it presents to us a Tony who’s been Iron Man for quite some time now. It starts off with him giving up creating weapons and focusing Stark Industries on other endeavors for the betterment of mankind. He packs up his AI GunSmith, as he and Pepper Potts are heading to a party. A few years later, Pepper is taking over as CEO, so that Tony can operate as Iron Man more freely. Then there’s an attack on Tony’s plane with Pepper and him onboard, using Tony’s old drones, and blaming him for crimes committed using them. Pepper is hurt in the plane attack and hospitalized. As you can imagine, you definitely want to find out who did this and why. Josh Keaton does a good job as Tony, but with Robert Downey Jr. putting on a stellar performance as Iron Man over the years in a character-defining role, it’s hard not to make comparisons between the two. By the end of the story, he does make Iron Man his own in this video game universe. The supporting cast actors are also strong, featuring Jennifer Hale as Pepper Potts, Leila Birch as Friday, and Ike Amadi as Nick Fury.

Let’s talk about the mission structure. You are playing as Tony Stark between missions, so you’ll be able to walk (teleport) around your Malibu mansion, shield Helicarrier, or any other needed locations for your missions. There are a plethora of things for you to interact with, whether you want to lift weights, punch a boxing bag, or even shoot some hoops (most VR games can benefit from having a basketball game). You can interact with Friday, your assistant AI. In your garage, you will have access to your suit for upgrades and modifications, as well as a globe for setting out on dangerous missions. 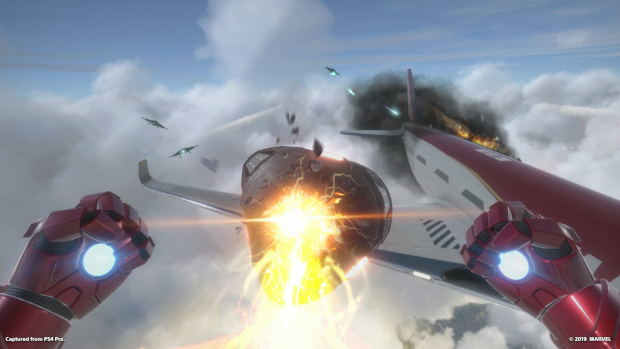 With the globe, you’ll be able to move it around to the locations where missions are available and choose what you would like to do next. The game will have some story between every mission, where you will interact with the cast. The missions themselves tend to be a bit repetitive. Most of them revolve around you, stopping unmanned drones that are attacking you in waves, and there are only a few drone types. You will quickly figure out the best strategy for fighting against each one of them. A good portion of the missions will have you flying from zone to zone, getting ready for more waves of drones. Don’t get me wrong, its fun to be Iron Man and use all of its combat maneuvers, but the whole experience could have used a bit of extra variety. At least you also have flight tests and free-flying segments. The flight tests are fun but hard as they combine flying precision and combat in a race against the clock. I always felt I did alright until, at the end of the run, Camouflaj would post their time… making mine look terrible in comparison.


I’ve talked about a lot of the good stuff, so let’s now discuss where I had some issues I had. Loading times are a big problem in the game. You will have at minimum over a min – and sometimes two – of just standing around in your VR helmet. Even while in missions when you need to need to transition from, say, your Malibu mansion to flying, you will have to wait for loading times. Another issue is the graphical fidelity of the game. I will give credit to the development team since some areas like Tony’s mansion look great. But for Tony’s mansion, there’s a Shanghai, which looks great from a distance, but when you get up close and personal, it looks very low res with textures that pop, and not in a good way. This will be easier to spot when you go down to the ground level. For reference, I’m playing on a PlayStation 4 Pro, so I don’t know if the issues are worse when playing on a standard PS4 console. 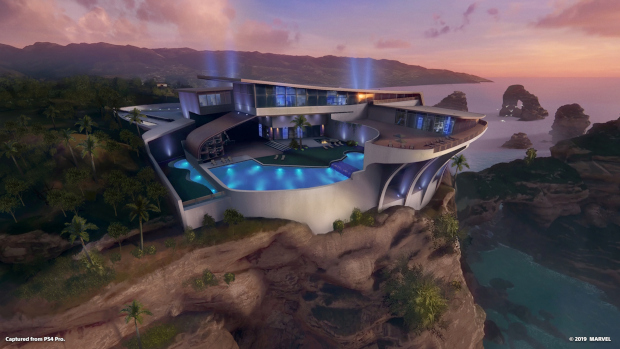 When it comes down to it, for me, Marvel’s Iron Man VR is definitely on the list of top 10 PlayStation VR experiences. They nail the feeling of being Iron Man thanks to the flight and combat mechanics, and the game has a great story with a strong cast that keeps you engaged until the solid final act. Even after the missions are done, there is some post-game content to keep you occupied. Iron Man VR does struggles in terms of loading times, and some visuals hits here and there, but in the end, these things don’t make you have any less fun as you fly at high speed and attack enemies as Iron Man. This is probably the best superhero sim yet, and it’s one you should experience on PlayStation VR.

Disclaimer
This Marvel’s Iron Man VR review is based on a PlayStation VR copy provided by
Sony Interactive Entertainment.