Ghost of Tsushima from Sony Interactive Entertainment and Sucker Punch was announced back in 2017, which, with everything that is going on in 2020, feels as if the game was announced for the PlayStation 3. In case you don’t know, the excellent team at Sucker Punch are the developers behind Rocket: Robot on Wheels, which was released on the Nintendo 64 back in 1999, as well as of two very fun franchises on Sony consoles: Sly Cooper and Infamous. We got three Sly Cooper games on the PlayStation 2 – which were later ported to the PlayStation 3 and the PlayStation Vita – along with five separate entries in the Infamous series. The last game the studio released was Infamous First Light on the PlayStation 4, and that was back in 2014, so you can get an idea of how long they’ve been working on Ghost of Tsushima.

In the late 13th century, the Mongol empire has destroyed entire nations left and right in its journey to conquer the East. Tsushima Island is in their path since they aim to also conquer mainland Japan. The Mongol invasion, led by General Khotun Khan, has already struck the island with a first wave that has brought the flames of destruction to the once peaceful land. It’s up to you, as samurai warrior Jin Sakai, to make good on the oath of your clan to do whatever it takes to protect the people and the land from the Mongol invasion. 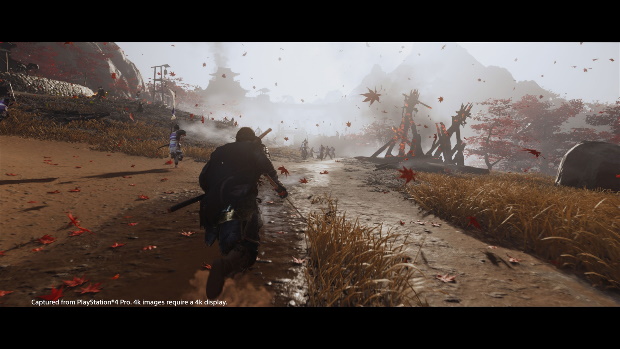 This is an open world action-adventure stealth release, and since the game is set in 13th-century Feudal Japan, so you can imagine what you’ll be doing in Tsushima Island. Exploration is key so that you can help protagonist Jin Sakai grow as a samurai warrior. The island is huge, offering vast fields, plenty of forest areas, shrines, and villages, to name some examples. Always check your surroundings, so that you can find new points of interest to investigate so that you can slowly but surely boost Jin’s stats. Use the map to mark where you want to go, and then swipe up on the Touchpad of your DualShock 4 to call upon the guiding wind to lead the way.

Before you start to play the game, and once you’ve adjusted the brightness and sound settings to get the best experience possible, you’ll get to select between three difficulty settings. There’s Easy, which will allow you to focus on experiencing Jin’s story as you explore Tsushima Island with a lower overall challenge. Medium is for those of you who want a well-rounded experience with a moderate challenge. And then there’s Hard, in which any mistake you make could cost you your life.


Next up is selecting the overall experience you want to have with the game. There’s English dialogue, English dialogue with subtitles, Japanese dialogue with English subtitles – referred to by the game as Samurai Cinema -, and a very special option called Kurosawa Mode. For Kurosawa Mode, you’ll be playing the game with Japanese dialogue and English subtitles, while the game’s graphics are presented with a special black and white filter, giving the game a look that pays homage to the movies of legendary filmmaker Akira Kurosawa. 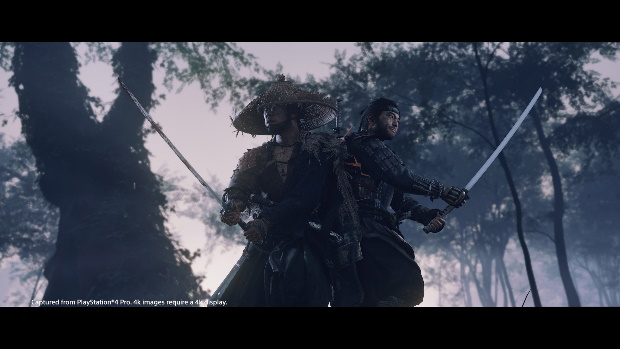 You’ll begin your quest alone, so you’ll need to make the most of stealth as you use your weapons, skills, and abilities to slowly but surely destroy the Mongol invaders. Once you manage to recruit others to your cause, hope will start to shine in the distance as you do everything in your power to save the people and the land before it’s too late. You’ll be controlling Jin Sakai with the left analog stick, moving the camera around with the right one so that you can have the best view possible at all times for this third-person action stealth journey.

During the initial sequence in the game, you will feel all-powerful as you use your regular and heavy attacks to slice all the Mongol invaders around you with your powerful sword. This is a feeling what will only last a handful of minutes since, as expected, your group will be overwhelmed by the sheer number of invaders. After being left for dead on the beach, you lose consciousness. You wake up wounded, near a village, with no idea of what is going on. As you explore the village, you meet the woman who helped you survive, and it’s by her side that you will manage to escape from the village to regroup.


For the prologue sequence, you’ll be sneaking around by pressing down on the right analog stick, so that you can use stealth to remain unseen. You’ll squeeze through small spaces with the R2 button, and the same button will be used for crawling below some houses. The X button will be for jumping, and you’ll use this to vault over short barriers, or to climb on top of structures. Once you regain your sword, on top of attacking with the Square and Triangle buttons, you’ll be able to block with the L1 button – you will review all of this during a flashback sequence in which you’ll be training with your uncle. You will also have some long-range weapons that will help you pick out enemies from a safe distance, so make sure that every shot counts! 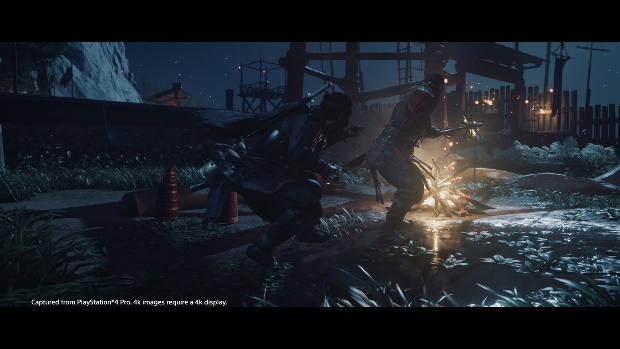 You must make the most of your skills and abilities to turn the odds to favor your potential victory. If you are damaged, you must call upon your resolve meter to heal your wounds, so that you can carry on and overcome adversity. You will gain Resolve by killing enemies, parrying attacks, and for using advanced techniques. Once you need to heal, just press down on the D-Pad to use your Resolve. To avoid damage, you should always pay attention to your opponents’ stance and reactions, so that you can use the Circle button to quick dash out of the way.

All of the items and resources you find will be added to your Collections menu. You will have a satchel for resources, such as bamboo, yew wood, iron, steel, gold, linen, leather, silk, flowers, and predator hides. Resources are important since they can be used to upgrade your gear. On top of requiring resources, you will also need to find supplies, which will act as the game’s currency. For example, you can upgrade your katana with 150 supplies and ten pieces of iron, so that it deals more damage, allowing you to kill enemies faster.


Right from the start, you will notice that Ghost of Tsushima is one gorgeous game. The attention to detail is superb, with detailed armor for the samurai, realistic models for humans, horses, and anything you find, forests packed with trees that move with the wind, expansive fields with grass that reacts to your footsteps, great fires that burn bright and that are beautiful but deadly, and water that will make you want to go for a swim. Because of all this, you can pause the action at any time by pressing right on the D-Pad to enter Photo Mode. 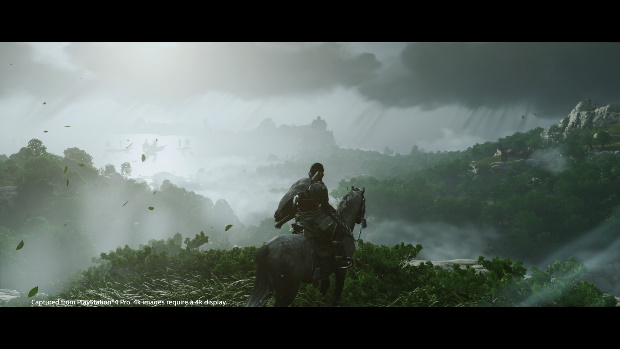 Once you’ve entered Photo Mode, you’ll be able to change the camera position, zoom in and out of the shot, change Jin’s current emotion, stop the animations for the environment around you, change the weather, change the time of day, add or remove cloud density, set the wind’s direction and speed, particle intensity, change the color grading intensity, focus distance, depth of field, focal length, add cinema bars, and more. With all of these options, you can definitely find the right place and the right time to take some beautiful images in Ghost of Tsushima.

Ghost of Tsushima has a full trophy list with a Platinum trophy for you to achieve, and it definitely won’t be a short experience! The good news is that there are no missable trophies in this one, so you’ll just need to complete all of the main story objectives, as well as all Side Tales, liberating all areas and destroying all enemy outposts, and finding all of the different collectibles. Upgrade your armor and blade, and after around 50-60 hours or so – give or take a couple of hours depending on your expertise – and you’ll be adding a very fun Platinum trophy to your collection. 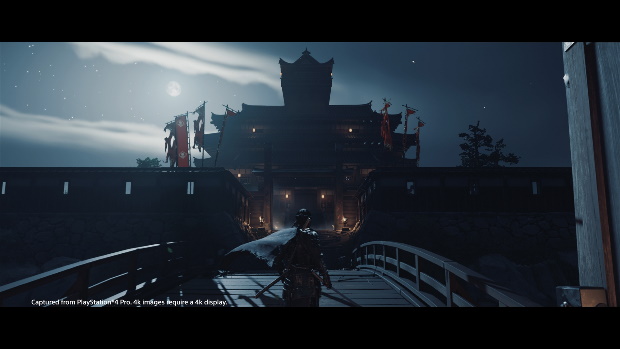 It’s been a long wait since Ghost of Tsushima was unveiled back in 2017, but I’m happy to report that the wait has certainly been worth it! Ghost of Tsushima is a masterpiece, and one of the best games on PlayStation 4. The excellent attention to detail, the solid art direction, superb soundtrack, fun gameplay mechanics, and huge amount of content make this a must-play on Sony’s console. Do you have what it takes to save the land? 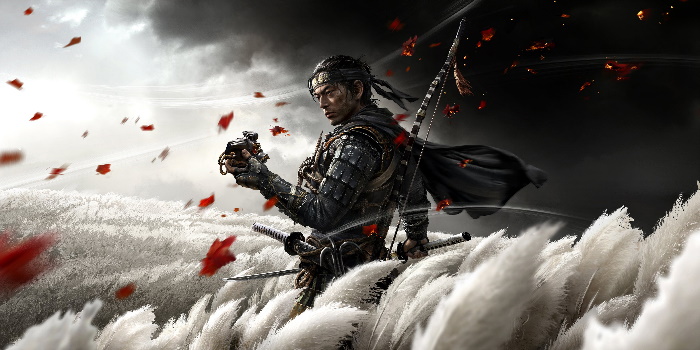 A must-play masterpiece on PlayStation 4

Disclaimer
This Ghost of Tsushima review is based on a PlayStation 4 copy provided by Sony Interactive Entertainment.

Jisei: The First Case HD Out On Consoles