Locomotion from Polyfox is a fun and colorful 3D puzzle game that is all about trains and the tracks they use. Learn more in our Locomotion review!


In Locomotion from Polyfox, you will take on a fun puzzle game with a charming color palette and easy to understand gameplay mechanics. You will be helping the conductor find all of the gold that has been stolen, and all you need to do is used the train to collect it! To know how much gold you will need to collect in each stage, you can just look at the upper left corner of the screen. The gold is also easily visible in each of the 52 stages you will visit, so you’ll be able to take your time in solving each puzzle as you explore four differently themed worlds. 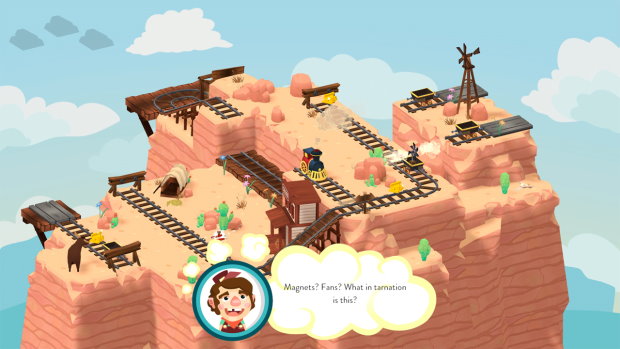 You’ll use the left analog stick to train on the screen, making it go forward when you press up, and making it go backwards when you press down. The right analog stick will be for swinging the camera around. If you press the ZL and ZR buttons, you can switch between the different junctions in the track. You can use the L button to lock a carriage to the back of the train, and the R button to lock one to the front. This will come in handy when you need to use these extra carts to remain in particular spots. The A button is for track switching, while the X button will be for activating the turntable so that your train can swing around and onto a new path. The Y button is for explosives, which will come I handy when you have to remove an obstacle from the track. 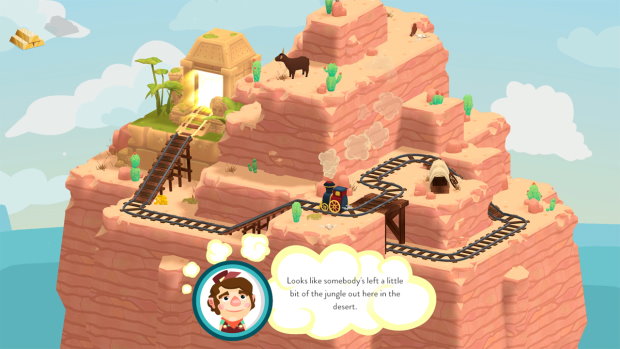 You will learn all of the basics as you play, chugging along as you collect as much gold as possible. This will also include activating the different levers you can find in a stage, which will activate some contraptions here and there – things such as platforms that lower or raise after you activate a lever. To make things easier for players, the game will set a number of flowers for each lever, and you can just check the number of flowers on each contraption to find out which lever will do what. 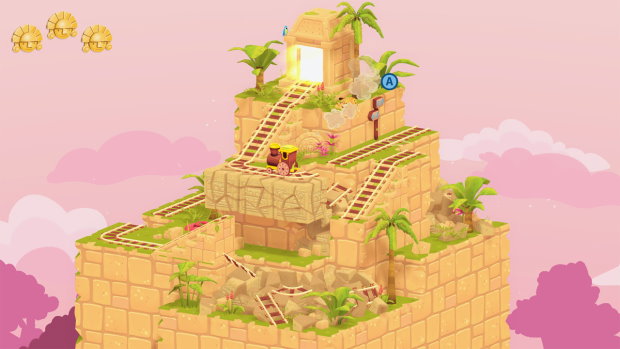 As you progress through the game, you will end up running into other stuff that will keep the whole experience feeling fresh. You will find pressure plates that are activated once you ride over them, seesaws that will do their thing as they move under the weight of your train, magnets that can be used to move carts around thanks to their powerful pull, or fans that can use the mighty wind to push carts so that they end up right where you want them. You will also need to be careful once you reach the second world since you’ll have to deal with parts of the track that crumble after you cross them, not to mention the icy paths you will find in the third world, which will make your train move onward without no way of stopping it! 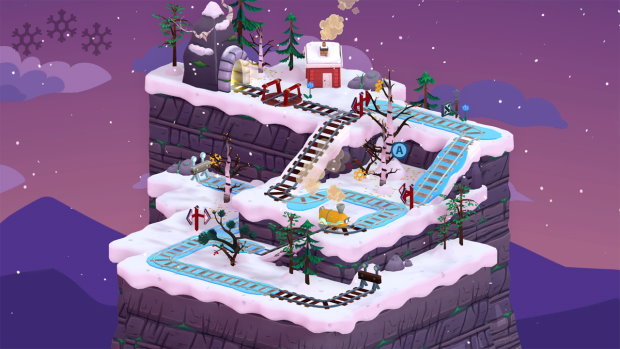 Locomotion is an entertaining 3D puzzle game with lots of trains to use, tracks to travel, and contraptions to use as you try to collect all of the stolen gold. It has easy to understand gameplay mechanics, and other than some times when the camera seemed to be position in a weird way in a couple of stages, it was a fun ride. Locomotion is out on Nintendo Switch with a $10.99 asking price.

Disclaimer
This Locomotion review is based on a Nintendo Switch copy provided by Polyfox.

[Beyond PlayStation] A Dark Room Review