In Flatland Vol. 1 from QUByte Interactive, you will take on a fast-paced and challenging hardcore 2D platformer with a very colorful and bright neon-infused look. The game will show you all of the basics during the tutorial, so be sure to select it from the main menu! As you play, Flatland Vol. 1 will introduce some very sharp spikes that will make you go boom if you so much as touch them. You will also find a large rotating cube – the first of fifty collectibles -, and will start to spot alternate paths you can take to find more of these collectibles. 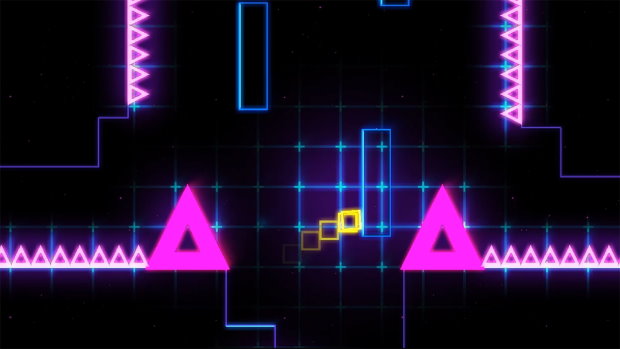 In order for you to focus on the action and avoiding all the hazards that are ready to destroy you, the controls for Flatland Vol. 1 are simple and to the point. You’ll be using the left analog stick or the D-Pad to move your yellow square left and right, jumping with the B button. The longer you press and hold down the B button, the higher and longer your jumps will be. Your square can also hug walls and do a wall jump, which will certainly come in handy in later stages where jumps get trickier. 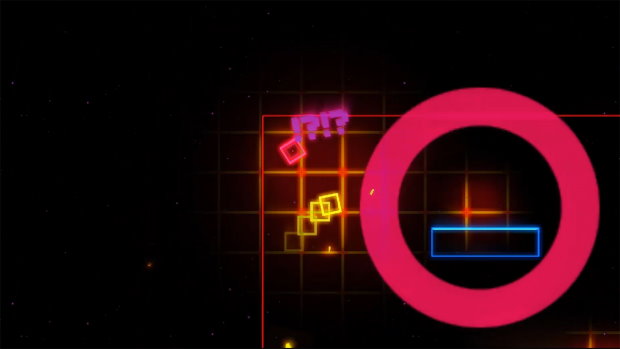 If you press and hold the Y button, you can make your square jump, which will have a big effect on your jumps. Oh, and if you want to change the song that plays as you run and jump through each stage, you can do so by pressing the – button. For the battle-style mode, you can dash with the ZL button, which will make you invincible, thus allowing you to go through stuff as needed. You can collect and change weapons by grabbing the large cubes, and you can shoot with the ZR button to get rid of any enemies foolish enough to stand in your way as you move from point A to point B.

As you progress through the stages in this volume, new hazards and obstacles will be introduced at a steady pace. There will be sharp pink spikes that move around the floor or platforms that disappear and reappear every time that you jump, which can make the platforming sections considerably difficult. The trick for these disappearing and reappearing platforms is that you can wall jump without having the platforms change, which is a good strategy for some of the more challenging stages. Add falling objects or glowing squares that shoot out missiles, and you’re going to have a fun but challenging time with this one! 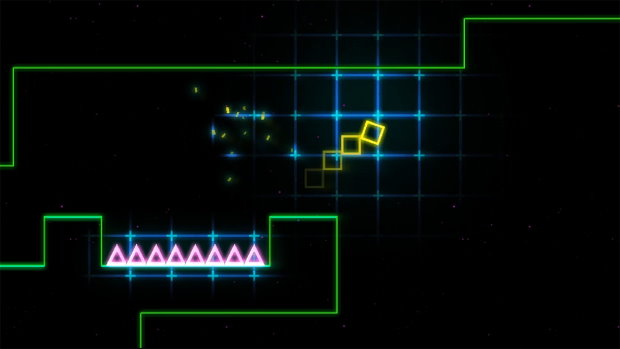 When you die, which will definitely happen a lot in this game, you’ll quickly respawn at the start of that stage, which is not bad given the bite-sized nature of each stage – and of each hidden stage. The other good news is that any of the large cubes that you’ve managed to collect for that stage – or hidden stage – will still count towards your total, so you could certainly try to make a risky jump towards a cube, manage to grab it, and die, and still have it count, so that you can 100% the game.


Along with the main mode that will have you completing a series of increasingly more difficult stages, Flatland Vol. 1 also includes three extra modes you’ll have to unlock. Faster Than Light is a speedrun mode in which you’ll be going up against the best completion times from the developer, searching for the best route to take in each stage. There’s a timer over your square, and you need to reach a level’s exit before time runs out. Not Him Again will have you outrunning the boss on all stages, which is easier said than done! The last mode is Square Fights Back, which is an arena-style mode in which you’ll need to destroy anything that moves. 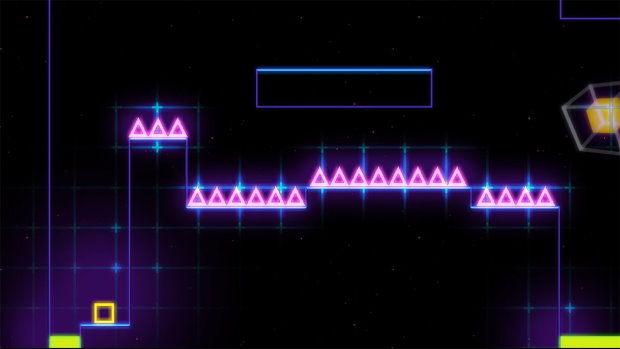 Flatland Vol. 1 is a fun, fast-paced, challenging minimalist 2D platformer with plenty of content to offer for its budget $4.99 asking price. I did have one issue with the game since, at some point, the music cut off completely, which screwed up my chances of completing stages that feature giant pink walls that go up and down in time with the beat. With no beat to follow, the walls just wouldn’t budge! I had to close the game and load it back up to fix this issue, so hopefully, it’s patched soon!

Disclaimer
This Flatland Vol. 1 review is based on a Nintendo Switch copy provided by QUByte Interactive.