STALK. CONSUME. GROW. EVOLVE.
CARRION is a reverse horror game in which you assume the role of an amorphous creature of unknown origin. Stalk and consume those that imprisoned you to spread fear and panic throughout the facility. Grow and evolve as you tear down this prison and acquire more and more devastating abilities on the path to retribution.

Carrion is a new reverse horror game that has you take the role of the deadly monster in a movie. The monster itself gave me vibes of The Thing and Stranger Things, which is definitely a good thing! Not often do you get to play as a monster, so I was super intrigued by the game. It’s a Metroidvania at its heart, which is my favorite genre, so I was even more on board about reviewing this one.

I was really impressed with Carrion right from the start. The game creates a great atmosphere as you escape from your containment unit, and you can immediately kill the scientists around you and eat them. You are in full control of this tentacled blob, but controlling it at first feels a bit odd as you are not using human locomotion. But once you give it a chance, it will all click right away. The creature can easily flow in every direction you press the analog stick in, skittering along the walls and moving through the air. Your tentacles will automatically attach to all surfaces around you, which is very neat. 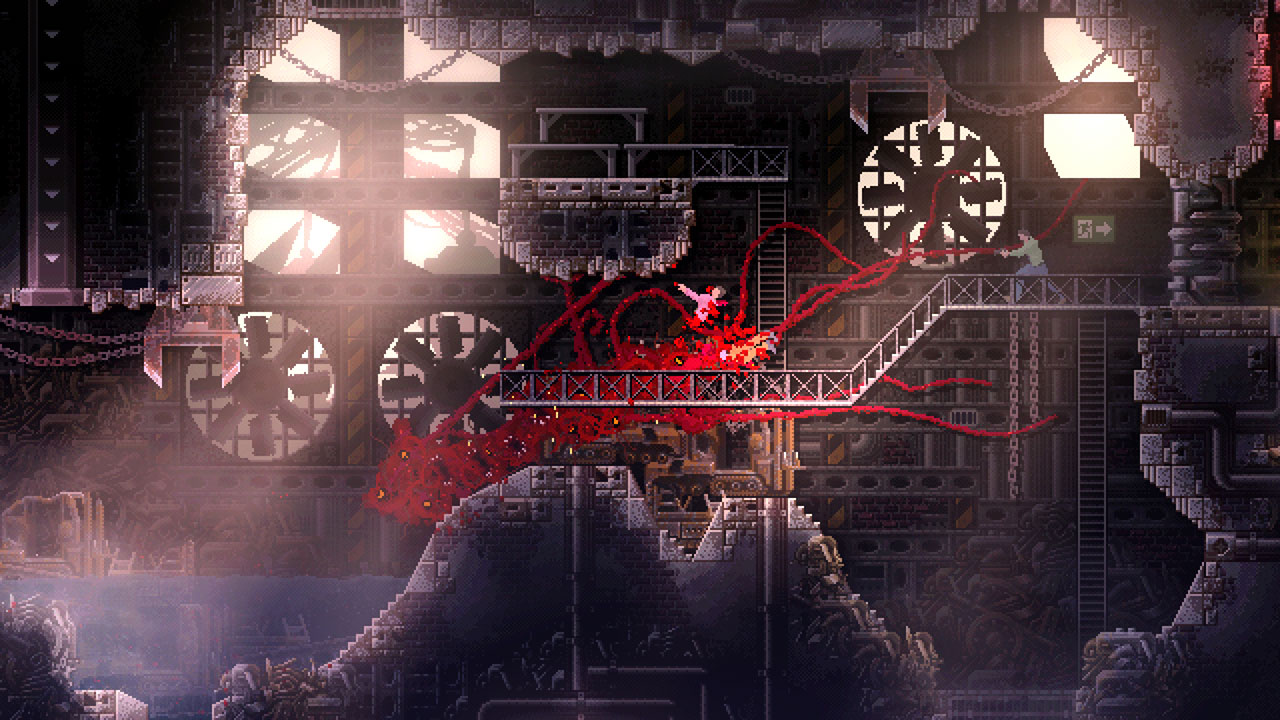 Since this is a Metroidvania, you will have limited powers in the beginning, but at least you can use your tentacles and grab and eat the humans! When you grab them, they are often torn in half, needing you to find the second part to finish your meal. Eating people is very important since it will allow you to heal your wounds. As you go through the facility, you will find new abilities for your monster, including webbing, invisibility, taking over human hosts, rush attacks, and more. These are all essential for navigating the facility, and without them, you won’t be able to proceed into the end game. All of these abilities are in containment pods, similar to the one you escaped from, and they augment your DNA.


Your creature will also grow in size as well with different upgrades. These will modify your health so that you can take more damage before you’re defeated. As your creature takes damage, though, you will drop in size until you can heal yourself or find the save spots in the facility. Certain abilities are locked to different forms of your creature. For instance, if you need to get past a laser beam, you’ll need to be invisible, which only your smallest form can do. There are certain bodies of liquid that you can use to drop part of your body in there, allowing you to shrink your size that so you can accomplish different goals, making you think about when and how to use your abilities. 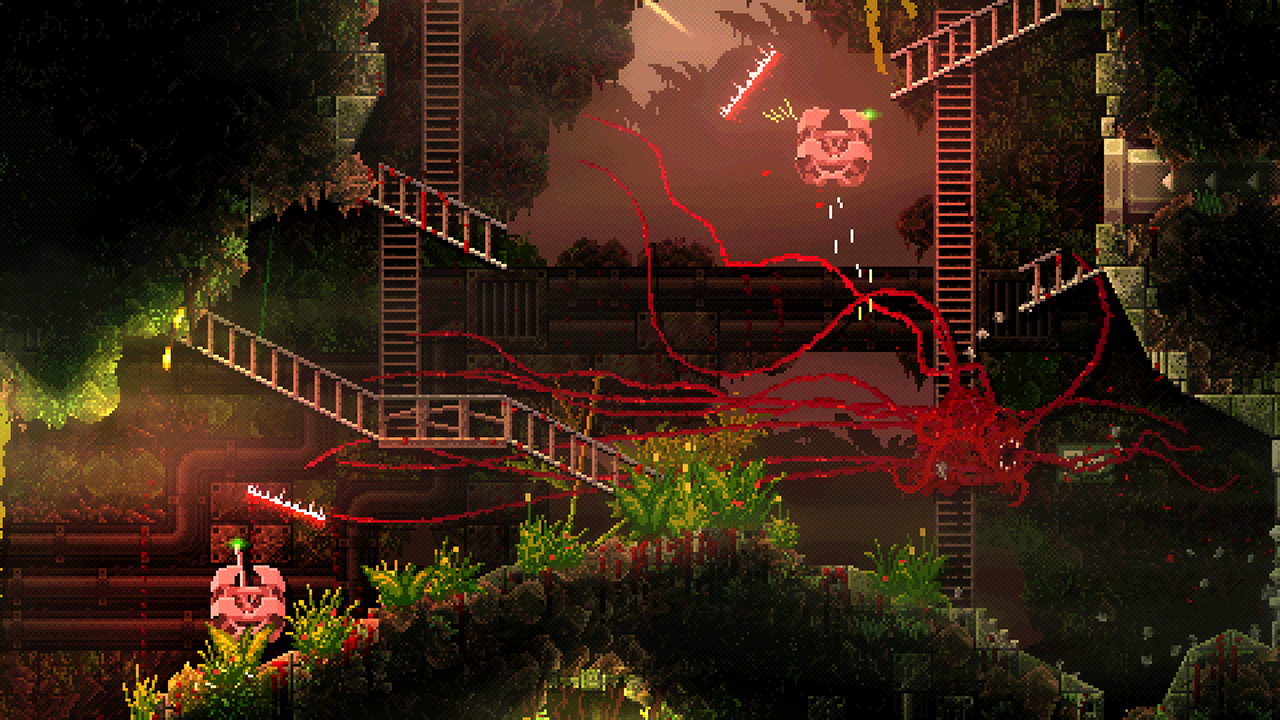 What really stood out to me was the excellent design of the facility you are stuck in is. You have a hub area that you can explore, and there are portals you can take to move to different areas of the facility. Each location has a lot to offer, and their layouts will make you explore every single corner. In each of these areas, there are spawning points, which will save your game, but you need to find them all as they act like keys as well. Every time you find one, it infects the facility, and one of the pieces of the door, keeping you from getting out, will fall into place. Once you find them all as you explore, the door will open, letting you know you’ve accomplished your goal. There are some good puzzles in the game, including one that I was stuck on for a bit as I didn’t explore the whole environment and forgot about one of the abilities my monster had

The one issue I have with Carrion, and it’s something that I didn’t notice until I was almost at the end of the game, is the lack of any mapping system. The level design is great, so you probably won’t notice this during most of your run, but when you’re trying to find anything you missed during your run, not having a mapping system might get in your way.

In each of the areas, you’ll find a bunch of different enemy types, and each one will require a different strategy. You will find a standard enemy with a pistol, soldiers with rifles and shields, flamethrower-equipped opponents, several types of flying drones, or piloted mechs. It’s a pretty good mix of enemies, and as you die in battle, you will at least learn more about their movement and attack patterns. For instance, the mechs are deadly and will kill you quickly with their gunfire, but if you hide above them and rush at them, you’ll be able to slowly dismantling them so that you can get to the gooey pilot on the inside and eat it. 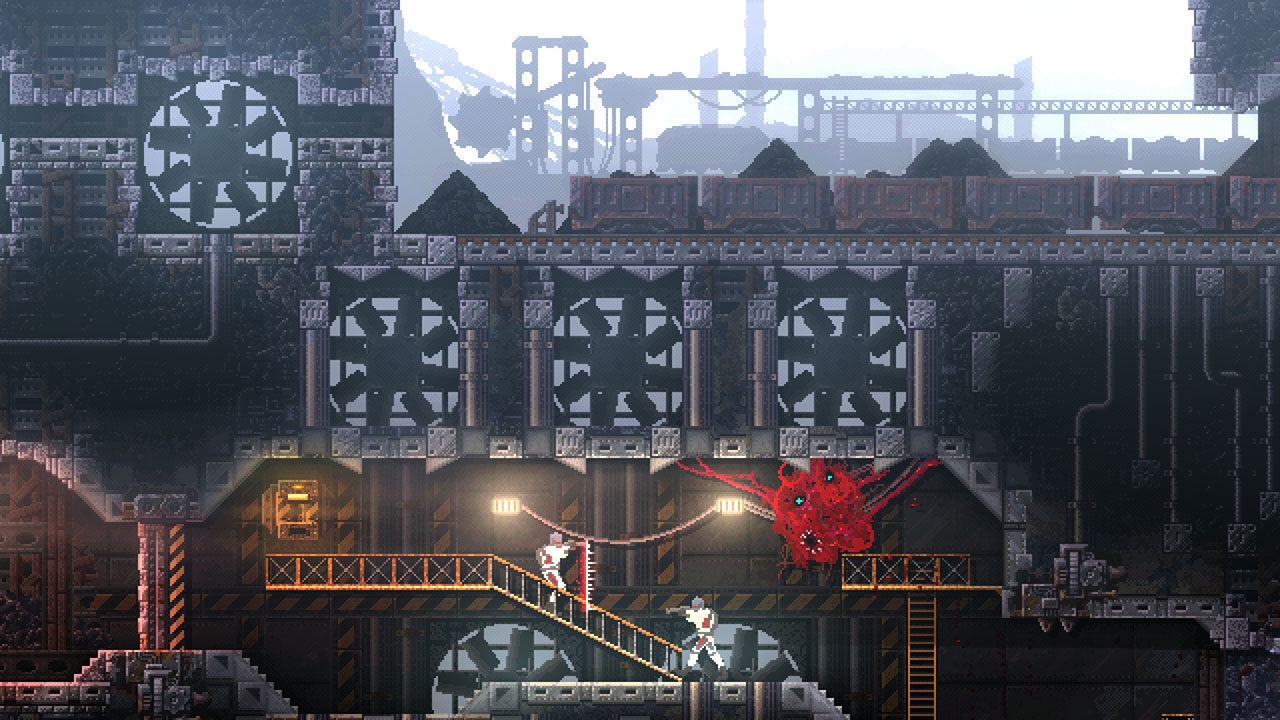 The game is a stunner, featuring beautiful pixel art. I was actually reminded a bit of Axiom Verge, one of my favorite Metroidvanias. What Carrion does a bit differently than others of the genre is that you will literally paint the hallways with blood and body parts. As you eat, kill and maim the humans, body parts and blood will spray everywhere, leaving areas soaked in crimson. As I backtracked through some areas later in the game in search of any collectibles, all of the halls were very quiet, packed with the remains of my opponents. It was good to see the enemies didn’t respawn, as it made all of my hard work even more satisfying.

I played the game in both Handheld Mode and in Docked Mode. I was able to enjoy my time with the game when playing on both modes, but I did feel that using the Nintendo Switch Pro Controller when playing in Docked Mode felt better since I was able to aim more easily. Your mileage may vary, so be sure to try both modes and both controllers, to see which one suits you better. 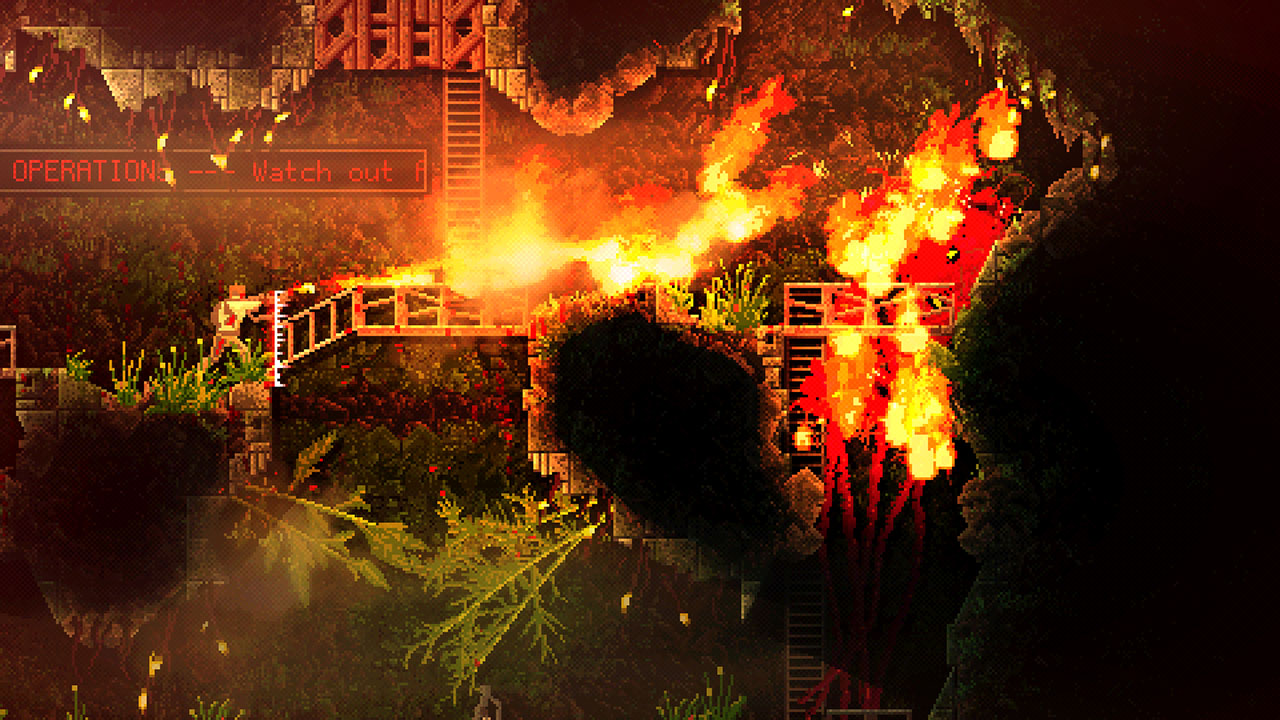 Carrion is an excellent game, featuring a very interesting premise with a very unique protagonist. It’s a great Metroidvania that will make you think about different strategies to overcome the enemies and obstacles on your path. Other than the lack of a mapping tool, this is a must-have Nintendo Switch release. 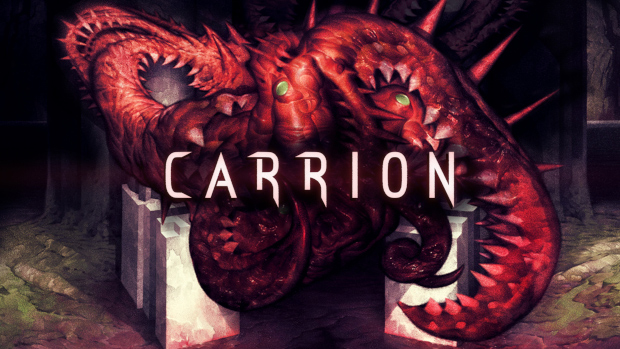 An excellent Metroidvania with a great twist to the formula

Disclaimer
This CARRION review is based on a Nintendo Switch copy provided by Devolver Digital.