1993 Shenandoah from Limit Break Studio is a 1 to 4 players shoot ’em up that pays homage to the genre classics on Nintendo Switch. Learn more in our 1993 Shenandoah review! 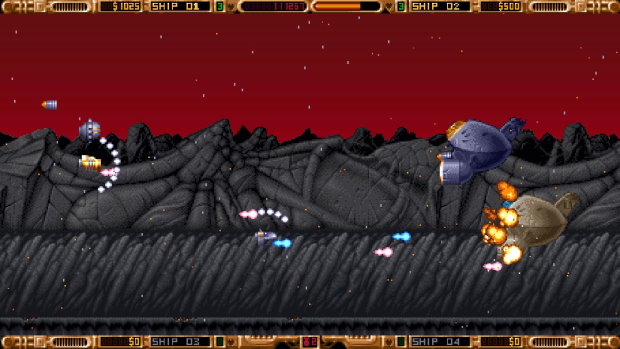 In 1993 Shenandoah, you will be controlling a spaceship during the end of the Interstellar Wars. Things have taken a turn for the worse, and mercenaries have been looting left and right. One group of elite mercenaries, led by Colonel Nestor, has found a particularly powerful tool: the Shenandoah. With this device, they can terraform barren planets, making them habitable. With its mighty power, Colonel Nestor and its group start to build an army that threatens to wreak havoc on the knowns star systems. Because of this, your mission will be very clear: take down Colonel Nestor and recover the Shenandoah before it’s too late!

This game has an interesting story behind it. It turns out that the game should have released way back in 1993 – hence that part of the game’s name on Nintendo Switch – for the Amiga. Life got in the way, and things didn’t go as planned, so the game was not released and was lost in the way. Many years later, the project was revived and got released on Steam in 2016 as 1993 Space Machine. Here we are now in the year 2020, and the game has made the jump to the Nintendo Switch as 1993 Shenandoah. 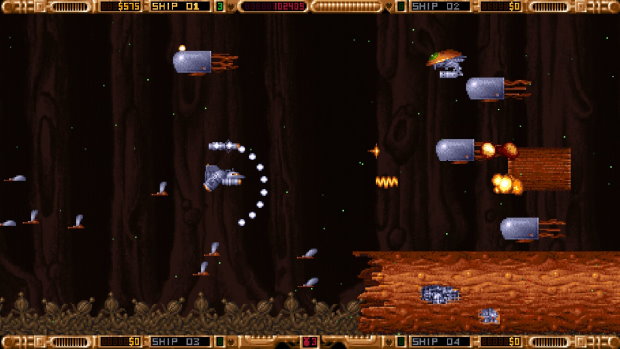 Before you start your run, you can select between three difficulty options. There’s Rookie, which is for those of you who might not have as much experience with shoot ’em up games. Skilled is for seasoned pilots who know what they’re doing. And then there’s Hardcore, which does its name justice, since you’ll only have three lives, and you don’t have a shield to protect you from regular enemy attacks! Are you up to that challenge?

In this shoot ’em up for up to four players, you’ll be controlling your spaceship with the left analog stick or the D-Pad, firing your main weapon with the A button, and unleashing the mighty smartbomb with the B button. The Y and X buttons, as well as the L, R, ZL, and ZR buttons, will be used for moving around your shield’s angle so that you can set it up just right to protect you from any enemy attacks you couldn’t manage to avoid -I’d suggest using the L, R, ZL, or ZR buttons for this so that you’re always ready to attack your opponents, or to quickly activate a smartbomb. 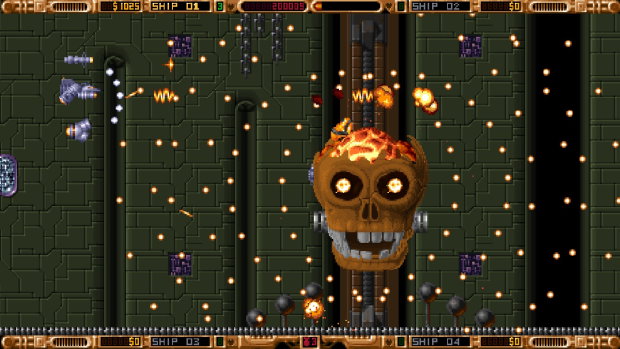 You’ll get to collect many power-ups as you defeat the different enemies you will face during your adventure. You can collect beacons to add armory for your spaceship, smartbombs that can make everything on the screen go boom or to help regenerate some of your lost shield power, which is a must since the shield can protect you from basic enemy attacks based on what angle it’s covering you at. There will also be collectibles that will add to your overall money total, and money Is very important.


Money can be used at the armory to purchase different Class 1 and Class 2 spaceships with a different stats that will make each one feel a bit different. Smaller spaceships will move faster and will make it easier for you to avoid enemy fire, and they’ll be able to carry a couple of extra weapons – these include ships like Interceptor, Arrowhead, Swan, Gold Punch, Mosquito, and Hedgehog. Then you have the Class 2 vessels, which are more expensive, bump up the overall punch they pack, might offer a better shield, but are generally slower– this range will give you access to Moonquaker, Charger, and Stinger. 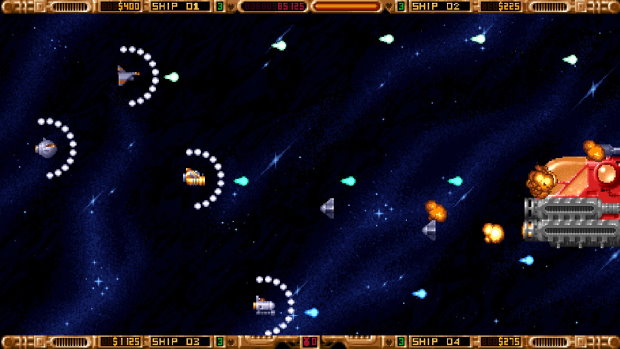 Money can also be used to purchase a ton of Class 1, Class 2, and Class X weapons to add to your ships, which can have an impact on how you take on each run in 1993 Shenandoah due to the great variety and how each weapon has a different attack pattern, which will affect how you go about destroying everything on your path. There are over 20 weapons in this one, so talking about all of them would take a bit, but just to mention some examples, there’s Backlash, which can be used to cover your back from any enemies that try to sneak up on you, Unloader, which will drop powerful bombs onto the ground, and the mighty Class X Thor, which will strike any enemies near your spaceship and then jump onto the next enemy – and the more you upgrade it, the more enemies it will jump onto to deal considerable damage!


With solid gameplay mechanics, a great soundtrack, a large variety of customization thanks to the different spaceships and weapons you can purchase, there’s definitely something for shoot ’em up fans to like about this classic Amiga game brought into the 21st century, making this an easy one to recommend. 1993 Shenandoah is out now on Nintendo Switch for a $12.99 asking price.

Disclaimer
This 1993 Shenandoah review is based on a Nintendo Switch copy provided by Limit Break Studio.