Welcome to the latest release in the POWGI series! This time you will take on cryptogram puzzles with quotes to uncover. Find out if the title’s worth playing in our Crypto by POWGI review!

This is a double review for Just a Phrase by POWGI. Ceidz and ThaRaven403 played the game, and this review presents what they both had to say.

Let’s start by explaining what cryptogram puzzles are. The goal of each puzzle is to find the hidden sentence. On the left side of the screen, the sentence is presented in a series of underscore characters with letters under them. Those letters represent the sentence, with a cipher that you will have to find. On the right side of the screen are two sections. The bottom one lists all the letters from the cipher on the left side of the screen. Once you select one, your cursor moves on to the upper right section, where you’ll select the letter you think goes in the place of the one you selected.

With no other hint than the name of the person who said the quote, it’s up to you to find some patterns in the words and cipher letters to try and identify some letters. Luckily, there is no penalty for using the check for errors option with the L1 and R1 buttons, so if you’re out of ideas by just looking at the letters, you can brute force your way through until you can find a pattern. 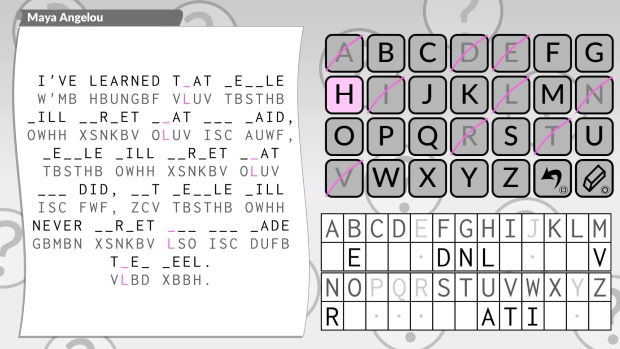 I’ve been looking forward to playing this one for a bit now. I found about it a few months ago in one of the trophy names for Epic Word Search Collection that hid its name using a cipher. Once I started the first puzzle of the game, I immediately liked what I was playing! There is a satisfying feeling that comes when you are able to identify a pattern of letters and things get going. It’s the first few letters that are difficult, because, as expected, the more you find, the easier the puzzle becomes. I was also really happy to see that the sentence that I submitted, by Niccolo Machiavelli, ended up in the game!

Speaking of trophies, you won’t be surprised to learn that this one has a Platinum trophy and that it’s not that hard to unlock it. You have to complete 32 puzzles out of the 180 the game has to offer, and the Platinum trophy will be yours! The game is only available on PlayStation 4 right now, but perhaps there will be a PlayStation Vita version at a later date, as has been the case of other releases from Lightwood Games. 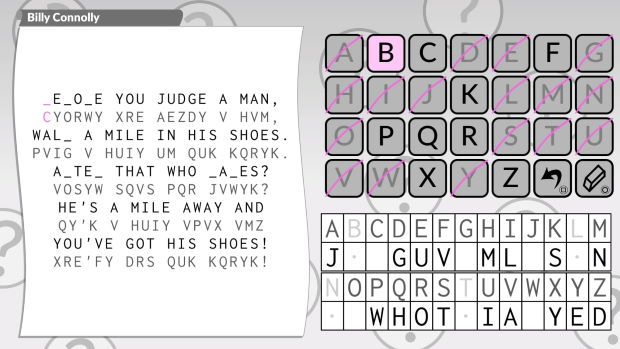 As ThaRaven403 mentioned, in this game a code must be cracked in order to discover the underlying quote. The letters are scrambled, and the sentence must be manually cracked by selecting letters from the available list. The game won’t tell you right away if a letter is misplaced or not, so it can be misleading at first until more letters are uncovered, and then it begins to make sense.

At first, and before I discovered the hint system a few puzzles in, I thought it was – by far – the hardest POWGI game to date since it begins completely blank, and you have to determine the letters. Luckily, the in-game hint system helps tremendously by telling us which letters are wrong. And then, when enough letters are found in each sentence, discovering the final letter placement made me feel accomplished.

The presentation of this game is similar to that of other POWGI releases, with a mostly white screen – or a dark mode, which is a nice change from the clear white backgrounds – with letters on it. Of course, the POWGI dog is also there with its dad jokes. The soundtrack is the same as previous POWGI releases, and I was slightly disappointed to notice that there weren’t any new tracks in this one. 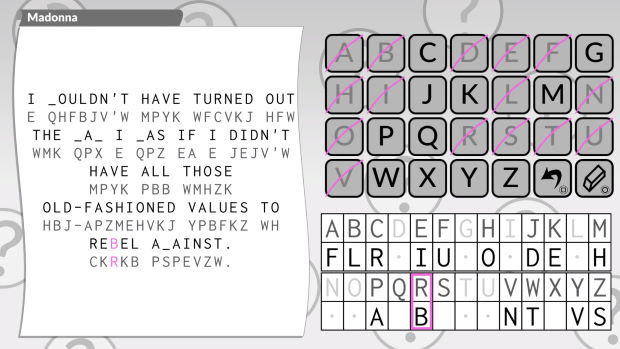 This game’s trophies are awarded for completing 32 specific puzzles out of the whole list, and luckily the particular puzzles are mentioned in the trophy description, so you can aim to complete those directly if you’re looking for an overall quick Platinum trophy run.

Crypto by POWGI is a great new take on word games, one that felt harder than previous releases. My favorite POWGI release from Lightwood Games is still Word Maze by POWGI, but this one is still easy to recommend if you’re looking for a deciphering word game.


Final Thoughts
Crypto by POWGI is a fun game that challenges your brain to find the answer to the many cryptogram puzzles it offers. Because of the nature of the game, puzzles are only challenging when you start to complete them but are still fun to play. With 180 puzzles to do, you’re in for a few hours of fun!

Disclaimer
This Crypto by POWGI review is based on PlayStation 4 copies provided by Lightwood Games.