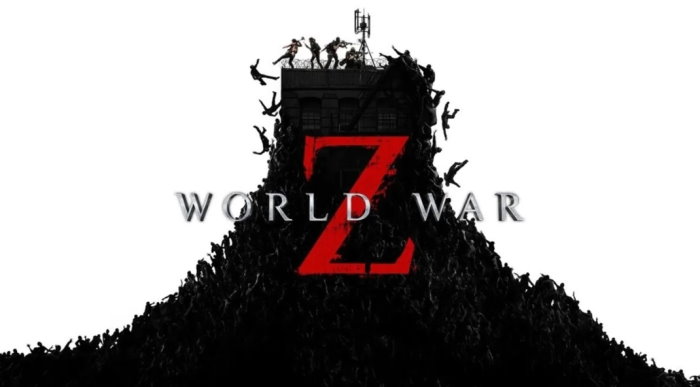 
The initial concept for the original World War Z release took inspiration from the novel, which also served as the basis for the 2013 film. In that original concept, the game had the player sitting on a chair whilst a guy told them about a zombie apocalypse that totally happened, and how the zombies were scary, but this idea was later scrapped as it was deemed not interesting enough. They instead decided to focus more on the seriously unnerving idea of having swarms of suicidal and incredibly fast zombies – also shown in the movie – as the basis for a third-person shooter. 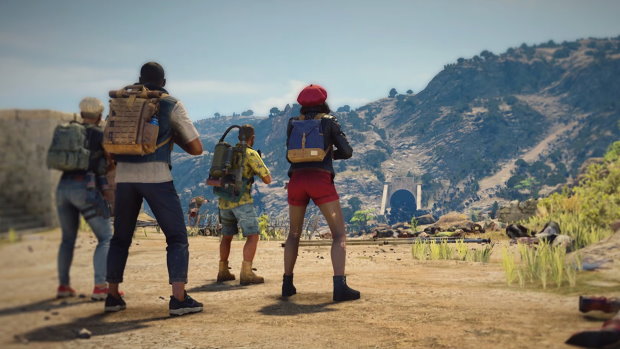 Fast forward one year, and the game is now being rereleased as World War Z – GOTY Edition. While it was not my GOTY for 2019, there is a lot on show to make it worth a shot to see if the game is worthy of your time and money. In World War Z, you play through four locations around the world, each with its own story and unique group of survivors. The GOTY Edition offers Marseille as a new location, along with four new playable characters, but it should be noted that, as is the case for characters from other locations, they are just a canvas for more skins and offer nothing unique by themselves.


The campaigns are, in theory, short, but they do offer some level of push back even on the easiest difficulty setting if your team gets unlucky or are just bad at their job. Luckily, you do not have to play the campaign in any particular order, and you are free to navigate the story as you please. You can play as either part of a group of four players, have AI partners, or have a combination of both. Having said that, you’ll want to play with actual players, either your friends in a closed match or with members of the public, because the AI here is not the best. They can shoot but will often focus on using their pistols rather than rifles. They can revive you should you be knocked unconscious and…that’s about it. If you find yourself with three other Ais in your group, be prepared to do everything yourself because even on the easiest difficulty, the AI teammates still offer barebones assistance, so picking the right class for yourself is important.

In Campaign Mode, there are eight classes to play as. When leveled up, they can bring their own unique buffs to the table, and it can be rewarding if you find a group that offers good synergy. Granted, 90% of the time, you will be too busy shooting zombies for any of the uniqueness of the classes to shine through, but it is the thought that counts. In the game’s defense, the AI of your allies is not why we are here. The zombie swarm is, and boy, do they do their thing! It’s both something that is up for praise and criticism. 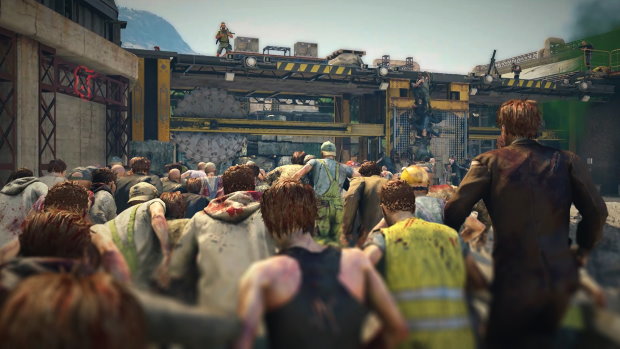 In World War Z that zombie horde is used liberally but not wisely. If your aim is to shoot as many zombies in the face as possible before you are overwhelmed, then this is the game for you. There is a level of exhilaration to be had when you see the swarm rushing from afar, and you feel adequately prepared. The same exhilaration is felt when you realize you overestimated your ammo count and are down to your melee weapon but want to take down as many as possible. That same exhilaration soon turns into apathy when facing your fifth swarm in the exact same match.

In some instances, swarms have appeared when the game has an onscreen timer warning you that a swarm will appear in around, say, two minutes or so, which is why you will have to prepare your ammo stock and overall defenses. In some cases, you are already being distracted by one swarm while another one is on its way. The swarm mechanic is fun but could have been finetuned a bit better. When dealing with a swarm, zombie variety is not the primary concern, but World War Z still tries to spice things up by adding variants such as the Bull, an armored zombie that charges at the party until it gets a hold of a teammate before unrelentingly pounds them into the ground, or the Lurker, which stealthily waits and then pounces on unsuspecting victims, clawing at them to death.


These enemies are a bit of a cheesefest since once you are caught in their grasp, you cannot escape without the aid of a teammate, and if everyone else is down for the count or too far away, what follows is a tediously long and drawn out death – perhaps a “I guess I’ll die now” button could have been added. Other special enemies include a zombie running around with a feedbacking megaphone that continually attracts other zombies to its location, or a soldier zombie with bombs that are about to explode, which rushes directly at the nearest player. All this sorta makes you wonder what was happening in this world before things got worse, huh? 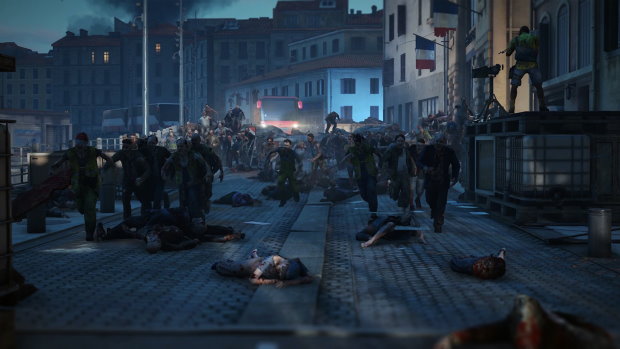 Having said that, the combat in World War Z is quite enjoyable. There is a wide variety of guns to use, from the main gun and a sidearm to a special limited use “heavy weapon” that you can pick up from sites around the map. As mentioned earlier, each character class has its own special item to use, but it usually just boils down to grenades and extra ammo packs. Upgrading the individual classes allows you to gain more upgrades – for example, the medic of the group can heal more if the correct upgrade is purchased.

Outside of the campaign, you have access to other multiplayer game modes, with the usual suspects ready for players to enjoy. There is a Deathmatch Mode, a Capture the Flag Variant, and Zones, to name some examples. All of them provide players with the gameplay mechanics you’d expect, but with hordes of zombies running around. There is nothing inherently outstanding about the multiplayer modes, but there is something to be said about how the swarms are incorporated. For example, in Deathmatch Mode, if there is too much noise in a particular area of the map – such as the sound from too many guns going off at once – then a dozen zombies will rush through that area indiscriminately attacking anyone in their path. This can distract from objectives and force players/teams to rethink their strategy. It’s a nice little addition that breaks up the overall monotony of a deathmatch or capture the zone fight.

Of course, it would not be a zombie game without a horde mode… and, let’s be honest, it’s why everyone is here. In typical horde mode flair, increasingly annoying waves of zombies rush the team, and the group is given a brief respite between rounds to restock, as well as to rebuild traps and defenses. These range from auto-turrets, barbed wire, or machine gun turrets to electric grids that can zap enemies that walk over them. These traps also appear in parts of the campaign, so that players can make the most of what they have to offer. If you place the right traps in the right places, you can completely destroy everything a wave threw at you. Though it should be noted that there seems to be a weird bug that can occur when you place a turret on the ground since it can sometimes launch you high up into the air. While this usually won’t damage players, I did have one instance that resulted in my death… 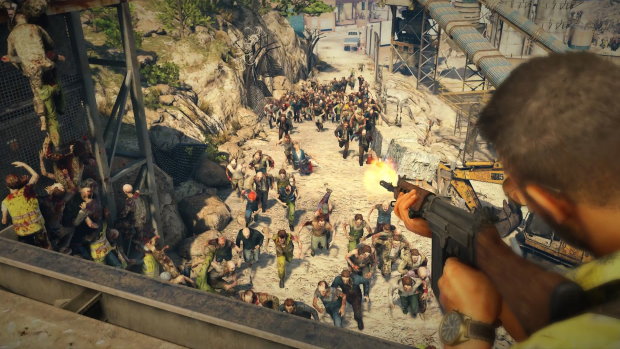 The game’s presentation is great overall, with a colorful art style, even if it might feel a bit washed out at times. The visuals are nice, but compromises had to be made to be able to render everything on the screen at once at a steady pace, so there are some texture issues that will pop up. There are some flaws here, but not due to a lack of care or attention. Appreciation is always reserved for a game that allows you to customize your experience in full. The controls work well for the most part, with the standard sensitivity customization you’d expect, but there are also the options to change your field of view, which you will definitely want to fiddle with, and also the option to change your controller layout from five pre-sets.

Sound-wise, the game manages to hold its ground with all the noise that builds up, and the crescendos when a swarm enters the map is a noise you will never get tired of, especially when they pile on top of you. The same goes for the audio feel of the weapons you’ll use, as well as the general ambiance all around you. I think that the best way to summarize this game is that the original 2019 release was not perfect, but it was a fun experience, and World War Z – GOTY Edition doesn’t change the formula, but it does add more content on top of an already meaty experience.

Disclaimer
This World War Z – GOTY Edition is based on a PlayStation 4 copy provided by Focus Home Interactive.

GOTY edition is packed with a ton of content

Evan’s Remains Out Next Week On PS4 And Nintendo Switch 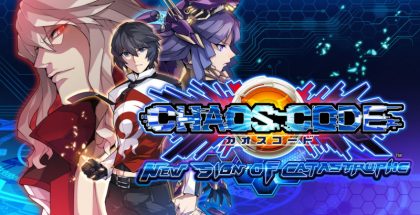 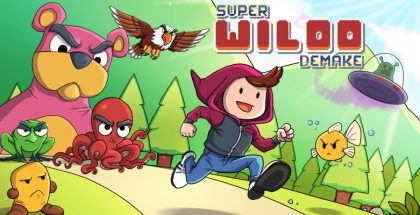