Urban Trial Tricky from Tate Multimedia is the sequel to Urban Trial Playground, which got a Nintendo Switch release a couple of years ago, and the latest release in the Urban Trial series. Urban Trial Tricky offers three game modes: Competition, Timed, and Tricks. On all three, you’ll be performing different tricks as you link them to increase your multiplier and, therefore, the overall boost to your score. The longer you sustain a trick, the bigger the payoff. 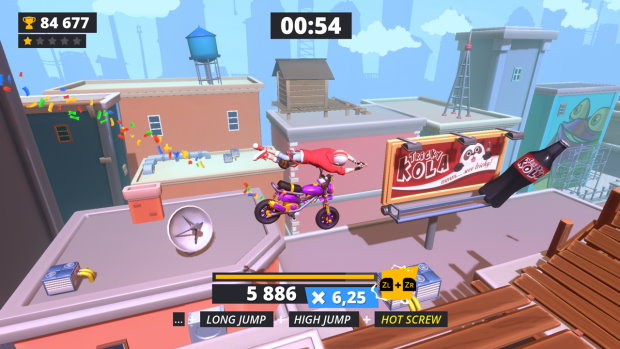 For Competition in Urban Trial Tricky, you will be focusing on making sure to pay attention since you’ll have to pull off many tricks to win so that you can earn a solid five-star rating and collect lots of money along the way. Timed will have you racing towards the finish line as fast as possible, and by performing the tricks shown on the screen, you’ll be able to improve on your overall time. For Tricks Mode, as the name suggests, you’ll be placing a big focus on tricks to get as many points as possible, as you aim to get a five-star rating. 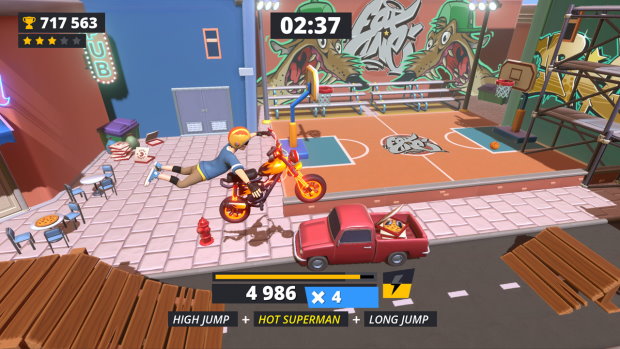 You will control your character’s bike with the left analog stick, accelerating with the ZR button, going in reverse with the ZL button, and braking by pressing both buttons at once. You can tilt the left analog stick as needed to perform different tricks as well as to stick the landing after a jump. You can jump with the B button, and the longer you hold the button for, the higher your jump will be. You can spin in the air with the A button, as well as to change your direction, performing tricks with the Y and X buttons in combination with the left analog stick. When in the air, you can make good use of the ZL + ZR button combo to perform a special trick, as long as you have filled up the special bar by performing regular tricks. 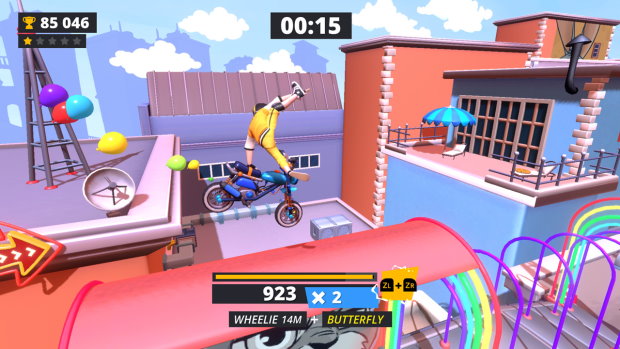 The game will get you started with a trio of tutorial stages that will show you all of the basics so that you can get the hang of things and can start having some fun. More tutorials will be introduced as you progress through the stages in Urban Trial Tricky, so be sure to pay attention to them so that you can be ready for new challenges, and to make the most of the new tricks you’ll be adding to your arsenal. You’ll be going from a frontflip to backflip, doing a 360° spin as you prepare for the next jump to do a Superman as you line up your landing.


Urban Trial Tricky offers you the option of customizing your rider, your motorbike, as well as the tricks you’ll be using during each race. Your racer will have a default look, and you can unlock more options, such as an outfit with a clown theme, a zombie, or even a banana outfit, either by collecting stars based on your performance in the game or by completing specific objectives listed in the rider customization menu. More colors and options for the exhaust fumes can also be unlocked for your motorbike, on top of also allowing you to work towards getting new bikes that will offer different stats in the power and control departments. Oh, and on top of getting the required stars or completing an objective, you’ll also need to use the money you’ve collected to purchase any customization option! 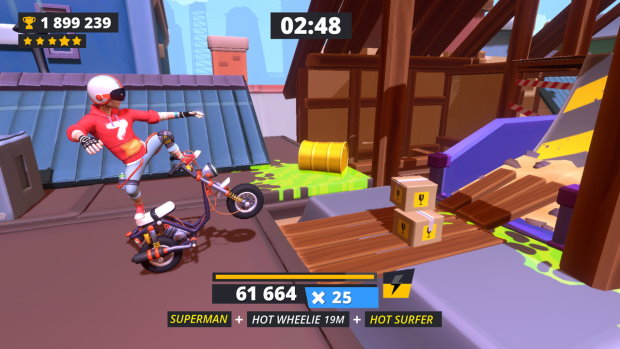 Urban Trial Tricky is a very fun trick-based release with a nice variety of game modes, online leaderboards, and plenty of replay value as you aim to get five-star ratings on all stages, collecting money bags and completing bonus challenges along the way to unlock and purchase all customization options. Urban Trial Tricky is out now on Nintendo Switch with a limited-time 10% discount. If you own Urban Trial Tricky, then you can get Urban Trial Tricky with a 30% discount! Since Urban Trial Playground is on sale at a huge discount that brings its price to a $1.49 asking price, you should definitely buy it and then buy this sequel!

Disclaimer
This Urban Trial Tricky review is based on a Nintendo Switch copy provided by Tate Multimedia.

A Summer With The Shiba Inu Out Today